Get up. Come on, get up. Off the mat. This isn’t done yet. You’re not finished yet.

It’s not finished yet. I’ll get a pot of tea. I’ll get a pad of paper and a pen. We’re fixing this right now. We’re out of both European competitions now, that’s gone. But we’ve still got a long season ahead of us. It doesn’t have to end here. It’s Fulham away and we can beat them. Mind you, it would be nice if we could sign someone like this. 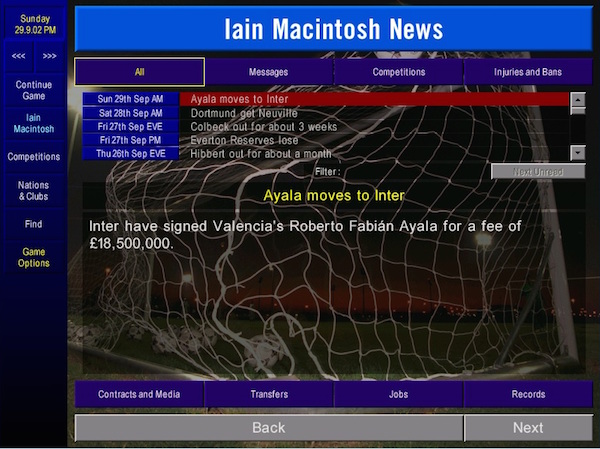 When real managers struggle, they always say that the answer is out on the training field. Work harder. Do what you do. Do what you know has worked before. And so I go through the team. There’s nothing wrong with Richard Wright, he’s playing well. There’s nothing wrong with the Chinese lads, Li Tie and Li Weifeng, they’re both averaging over seven. Steve Watson and Gary Naysmith have to play as full-backs because Tony Hibbert and Alessandro Pistone aren’t fit. We have to play Lee Carsley at the back of midfield, he’s a God.

Thomas Gravesen is injured. Micah Hyde and Rob Lee are better than Tobias Linderoth and Steven Schumacher, so they have to play. Wayne Rooney is our best player, he has to play. Carlos Dure and Tomasz Radzinski are better than Kevin Campbell and Nick Chadwick. The diamond formation took us into the Champions League. We play better when we man-to-man mark. Lets get out there and do what we do. We’re better than this. 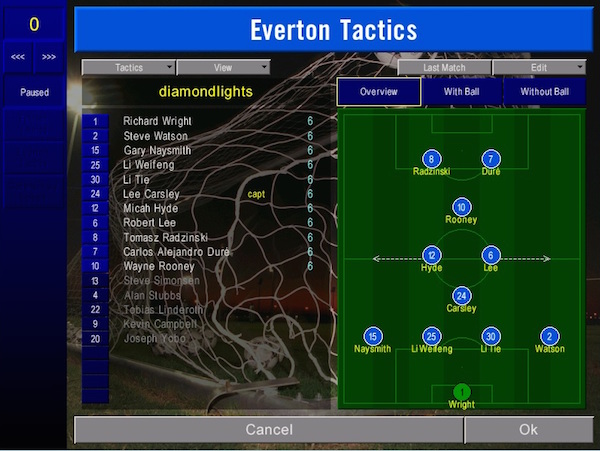 Ok, that’s a blow. It all started so well. Rooney caused problems from the start and though we made as many chances as we allowed Fulham, ours were more promising. And then Li Weifeng headed home a Rooney corner. And then Radzinski scored! Except he didn’t. Because I span my chair around in a victory spin when the screen was flashing and on completion of 360 degrees discovered that it had been disallowed. And then I don’t know what happened. It was the 43rd minute and everything was fine. Then Fulham had six shots on target before half-time and scored with two of them. Was it a fluke? I held my nerve. Andrejs Stolcers scored three minutes after the break. No. No, it wasn’t a fluke. 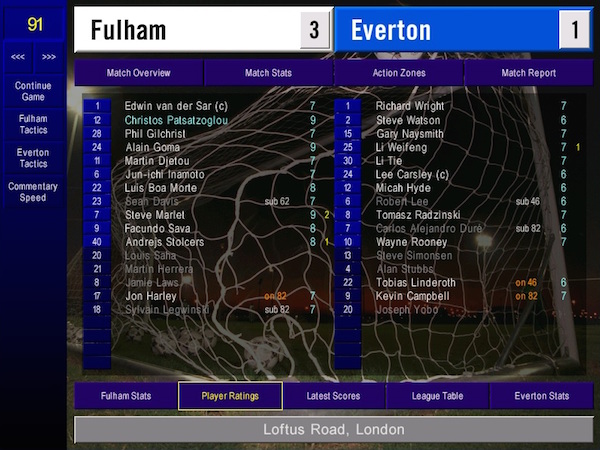 There’s no time to feel sorry for ourselves, we’re back in action at home to newly promoted Wolves. Dave Jones’ side are one of just two teams below us, so it’s fair to say that this game is absolutely not to be lost under any circumstances or it’s ‘cracked badge week’ in the tabloids. They play the same diamond formation as us, but Rooney is exhausted and can’t be played, nor can Radzinski. Chadwick and Campbell replace them. Gravesen comes in for Lee, who may not be fit enough for this sort of thing. This time, let’s get it right. 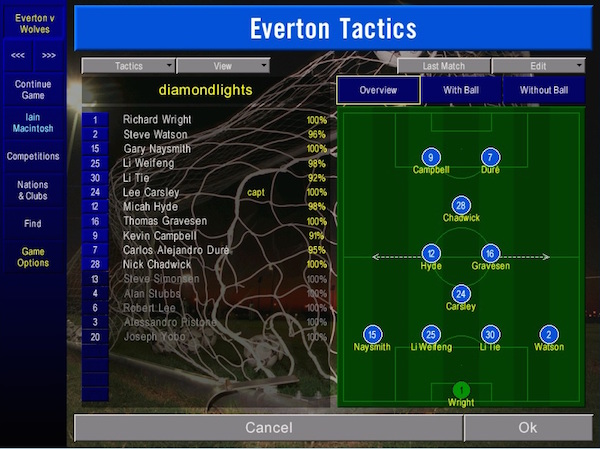 That will do. Aided by Wolves’ belief that they can fall back and grind out a draw, we make chances and for once we convert them. Gravesen’s return has a galvanising effect on the men around him and there’s a first goal for Hyde as well. Wolves aren’t very good, so we shouldn’t be fooled into thinking that the storm has passed. But it’s nice to get three points for once. In other news, Duncan Ferguson turns up late for training and is duly fined two weeks wages. He is shocked, apparently. I honestly don’t know why. 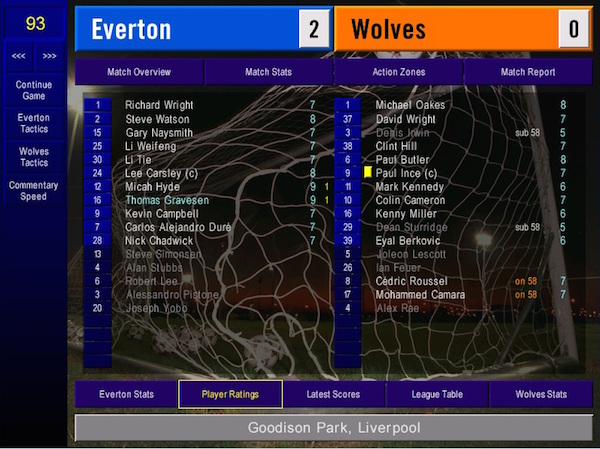 Oh, good. Manchester United at home. Just what you need when you’ve stabilised your collapsing empire. Weirdly, United haven’t bought or sold a single player since the game began, but then perhaps it’s not so weird. They’re brilliant. Ruud van Nistelrooy has scored 42 goals in 61 games. Juan Sebastian Veron has an average rating of 7.89 this season. Why bother spending money? They fell well short last season, but they’ve picked up seven wins from seven so far in this campaign and frankly, I think we’ll need more than the return of Rooney to save us here. I tell Carlsey and Gravesen to both cover Veron. Maybe that will work… 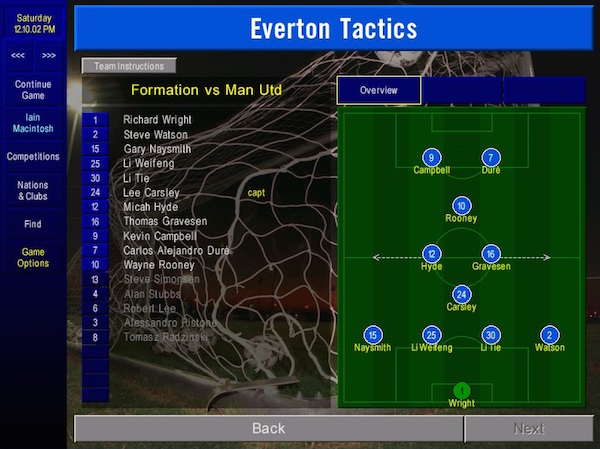 Carlos Dure had better hide. After a promising opening period, he pushes Gary Neville over and is shown a straight red card. We had little chance of beating United with eleven men. We have no chance with ten men. Rio Ferdinand evens up the numbers with two quickfire second-half bookings, but there’s no time to do anything more than put in a decent showing. And you don’t get any points for that. 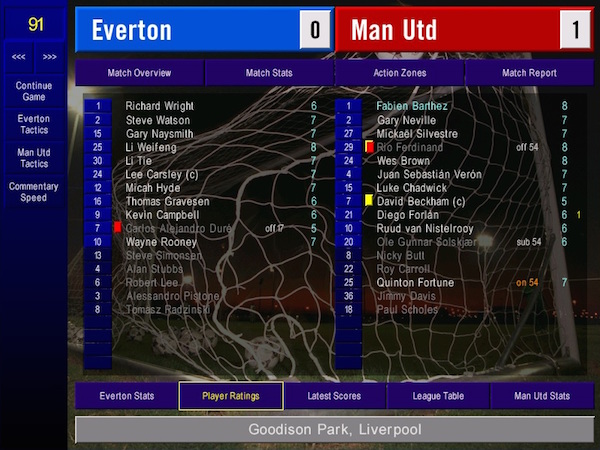 Another newly promoted team beckons, Joe Kinnear’s Crystal Palace. Kinnear didn’t get Palace up, that honour belongs to new England manager Trevor Francis. But he has gone a long way to keeping them up. Aki Riihilahti is running at almost an assist every game and it’s usually Ade Akinbiyi who feels the benefit. We must be careful. Carlos Dure is out because I’m furious with him. 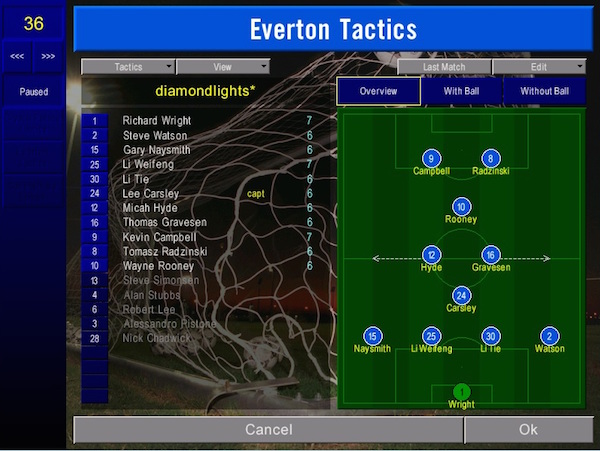 A tough game, a game that is typical of our season so far. We’re okay, but not great. We’re punished harshly for a mistake. Andy Johnson opens the scoring just before half-time and the game seems to be ebbing away, despite a double substitution and a switch to attacking football. And then, as injury time approaches, old warhorse Kevin Campbell lets fly with something scorching and we’re able to salvage a point. We remain just above the relegation zone. 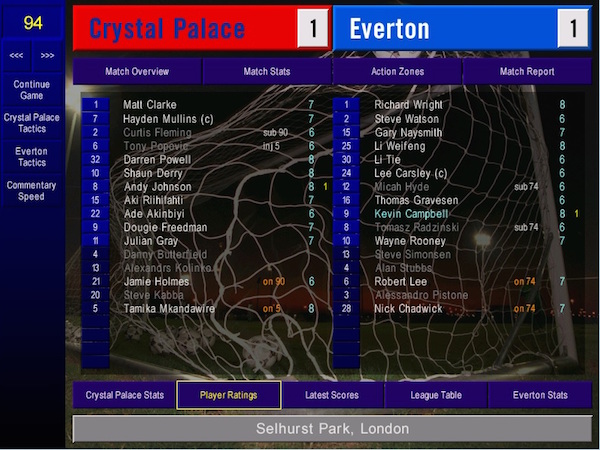 Now, if we’ve had a bad season, what can you say about Southampton? They’ve lost all eight of their games, they’ve only scored six times and they’ve conceded 18. Manager Mick Halsall is in trouble and if he doesn’t win this, he may be sacked. Everything possible indicator suggests that this will be our third win of the season. And yet I feel uneasy… 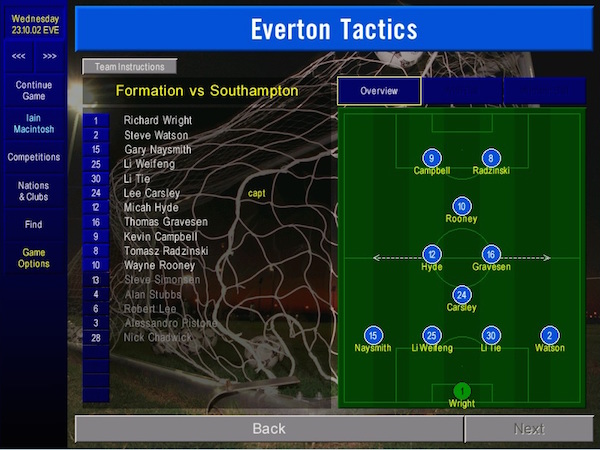 Is it because we’re Everton? Is it that the Football Gods have cursed us, making everything much more difficult than it should be? We’re straight into Southampton from the start, but nothing sticks. We make masses of chances, but they’ve save everything. They’re rubbish. It takes 71 minutes before Lee Carsley finally breaks the deadlock and I’m genuinely offended that we didn’t score four or five. In the last minute, they break forward and I say aloud, “They’re going to score. They’re going to score.” But the Gods are merciful and they do not. It’s a win and we’re up to 15th, but I’m not smiling. 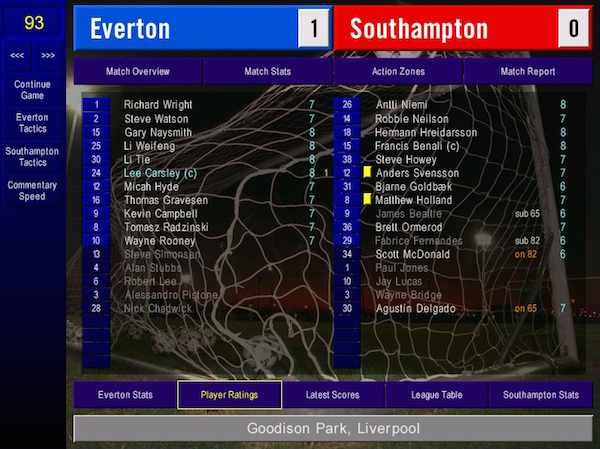 Southampton aren’t a real test of our abilities. They’re a terrible football team and anything less than a defeat would have been scandalous. Newcastle, on the other hand, are serious contenders. Martin O’Neill has them playing with a back three and they’re going to be in the mix for a Champions League place. He’s spent big, laying out £14m on the likes of Kily Gonzalez and Sebastien Schemmel. We stick with the same team, but use Carsley to track Craig Bellamy in the hole, rely on the Chinese lads to cover Alan Shearer and Carl Cort, and leave the rest to zonally cover the gaps. 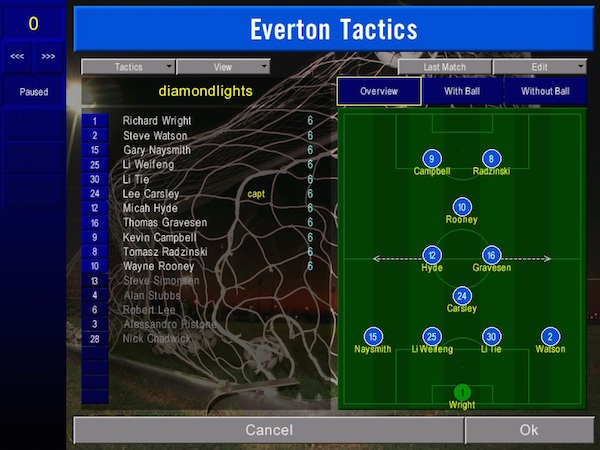 They’ve got it. By Jove, they’ve got it. For possibly the first time this season, it’s a thoroughly satisfying performance in all departments. Richard Wright is relatively untested until the last five minutes when he saves the day. Li Tie and Li Weifeng are outstanding, dominating their strikers. Kevin Campbell is a real handful up front. We win and we win well. We’re up to 13th now and my blood pressure is back within safe levels. 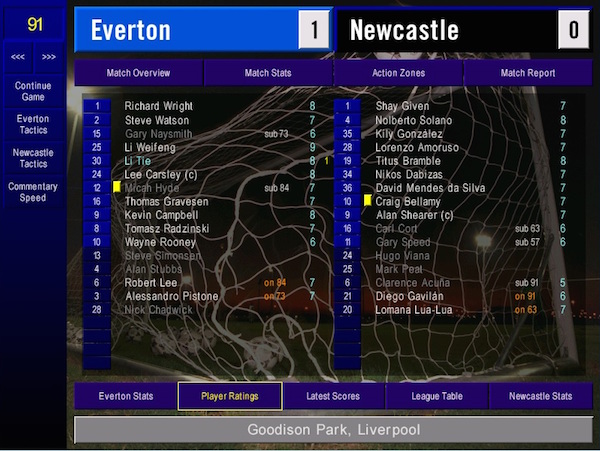 Last season we made early exits in both domestic cup competitions, arguably one of the reasons why we performed so well in the last weeks of the league, but I’d really like to improve on that. The aim of this mission is to win silverware and you don’t get shiny stuff for coming fourth. Unfortunately, we’ve been drawn away at Manchester United in the League Cup and I don’t fancy our chances. Rooney is tired, so he’s replaced by Carlos Dure. This will be a tough one. 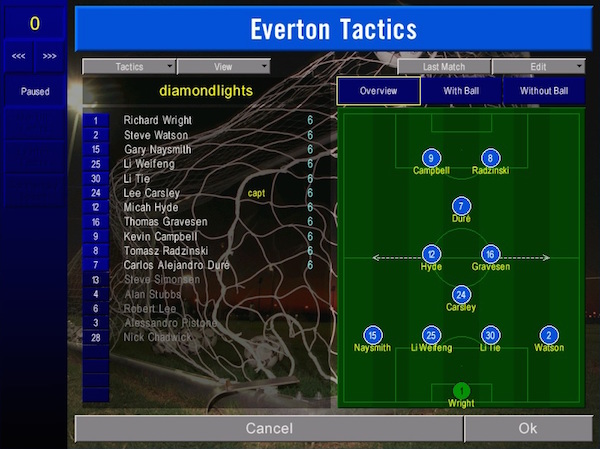 Sir Alex Ferguson rested a few players, but not to an extent that would give us an advantage. Instead of Veron, he played Scholes. Instead of Van Nistelrooy, he played Solskjaer. We gave a reasonable account of ourselves and kept the deficit to a single goal for most of the game, but what can you do? They’re on another level. 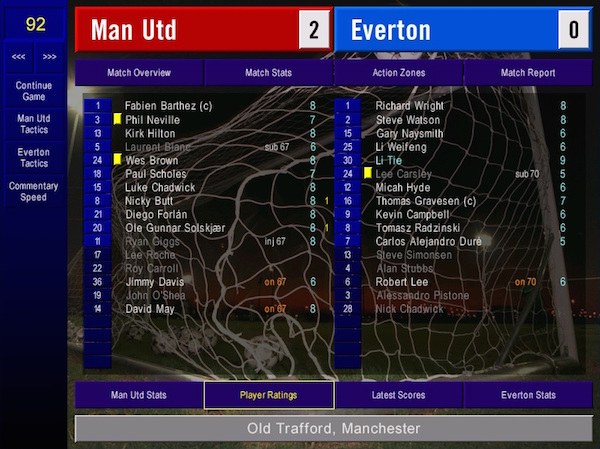 Nevertheless, we have to be satisfied with our work in October. We’ve turned the tide. We’re not going to retain our place in the top four and our utter failure in European football means that only the FA Cup offers any hope of accomplishing our mission. But by riding out this storm, perhaps we’ve accomplished something even greater than that. We’ve fought our own fears and we’ve been victorious. And this has not gone unnoticed. 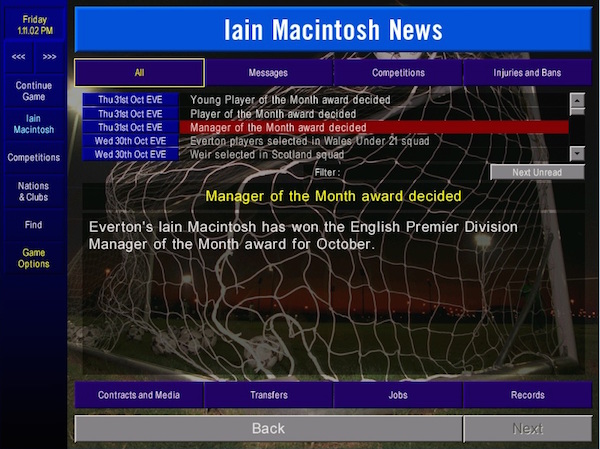 We’re in a position of relative safety, though a few more points wouldn’t go amiss. But until the bigger issues are resolved, we can’t hope for much more. We are £26m in debt, we cannot buy players, we cannot refuse reasonable offers and we’ve lost over 12,000 seats thanks to those bastards at Health & Safety. Don’t think I haven’t noticed your tweets with screenshots from your own Everton missions where you get rescued by rich consortiums within weeks of taking over. When will our Prince/Princess/Oil Baron come? 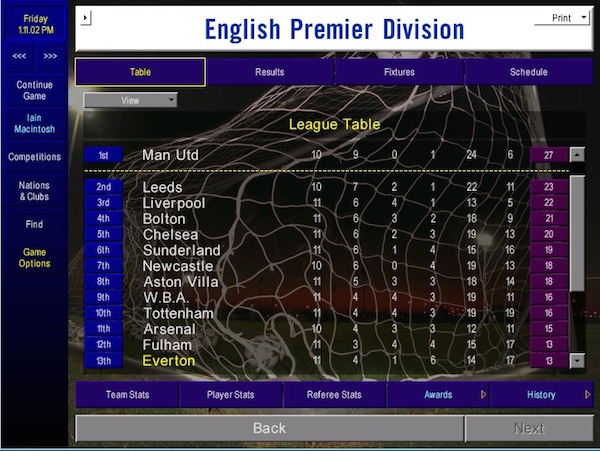 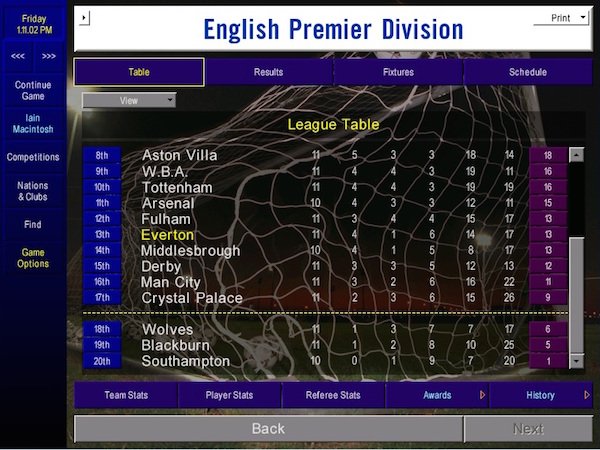