There are some clubs, well managed and dripping with resources, that can always look to the junior teams for solace in hard times. The promise of youth can be invigorating, but more than that, it can cultivate identity. The club, after all, will outlive all of us, and it’s reassuring to know that wave after wave of young footballers are being schooled and mentored and given every chance to fulfil their potential. Everton is not one of those clubs.

We haven’t got enough money to look after the first team, let alone the stiffs. Besides which, most of them are irredeemably crap. I should know. I’ve had full control of them since the start. However, they do come in handy from time to time. The Chinese lads are playing so well now because they had a season in the reserves to learn English and to make their mistakes in private. And now, in response to your suggestions to try a back three, they’re working on new tactics. After all, if there’s one thing we’re not short of, it’s central defenders.

But for now, we’ll stick to the diamond formation. Derby County are an interesting proposition. Managed by John Gregory, they returned to the Premier League at the first attempt, albeit through the play-offs. They play with five at the back, one of whom is Horacio Angel Carbonari. They must be respected. 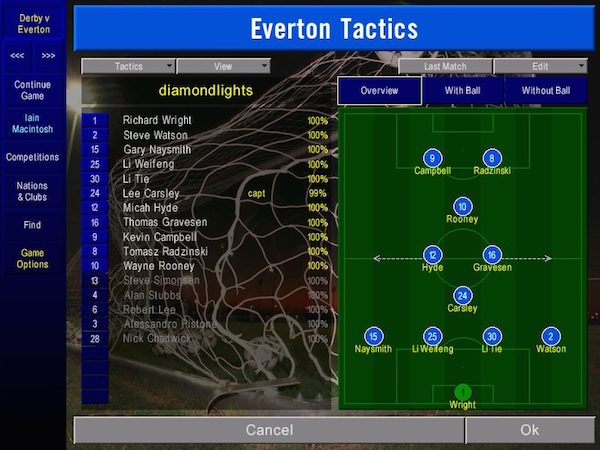 Well, that wasn’t very good. We started perfectly well, made a couple of chances and in the space of three minutes found ourselves two goals down. Martin Rowlands and Gareth Whalley did the damage and it completely knocked the stuffing out of us. Even a triple substitution on the hour made no difference. I don’t mind being beaten, but it would be nice if we could put up a bit of a fight. Maybe we need to bring Alan Stubbs back. 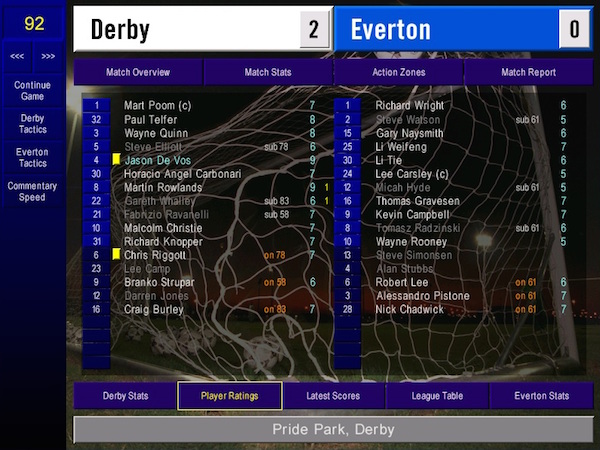 Elsewhere, Blackburn Rovers sack Graeme Souness after his £23m spending spree (the most expensive player was £3.1m Clarke Carlisle) results in nothing more than a relegation battle. They may find themselves spending even more under their new manager. 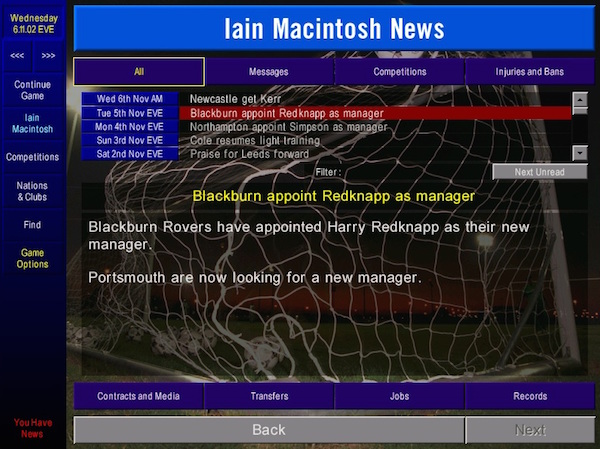 And there’s another sad moment as one of the game’s best players is finally discovered by a big club and whipped away. I would certainly have bought Mark Kerr to Everton, even if I wasn’t able to get him from Falkirk. I can’t help thinking that Hibernian have let him go a bit cheap there 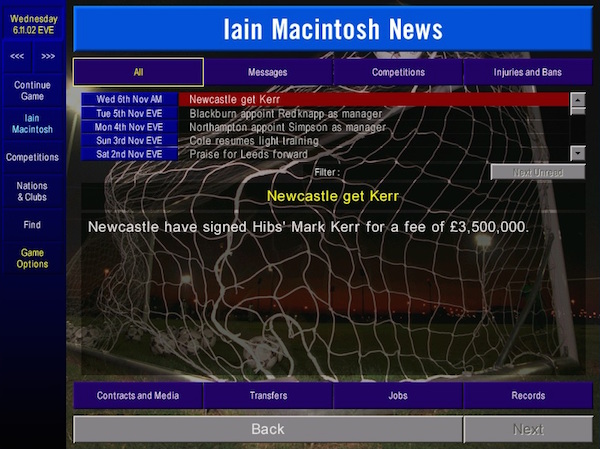 Bolton. Bloody Bolton. Scourge of the game. Taker of souls. Sam Allardyce plays the classic 3-5-2 and he has the players to make it work. Ricardo Gardner is averaging 7.92 on the left and Jesus Arellano, a £4.3m signing from Monterry in Mexico, is 7.73 on the right. There’s the small matter of Youri Djorkaeff in the hole and if they had better strikers than Henrik Pedersen and Chris Armstrong, they’d be even higher up the table. And they’re currently third.

The only option we have is to pin down their wing-backs, kick them very hard and hope that we take our chances. And we’ve got other problems. Wayne Rooney is unhappy and wants a new contract, but when I try to offer him one, he says that he doesn’t want to discuss a new contract. His morale is now ‘very low.’ So’s mine, mate. So’s mine. 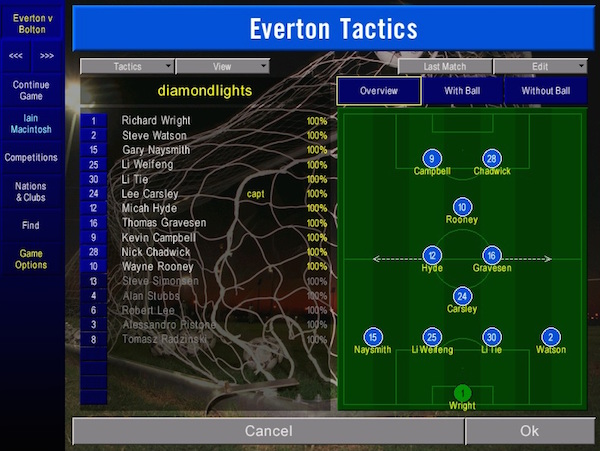 That was very bad. We didn’t even get close to hurting them. Sometimes no amount of man-marking and hard tackling can save you. Rooney’s late goal is the only positive, but we’ve been battered here. We’re only getting high individual ratings for the defenders because they been able to come at us again and again. We’re back down to 15th and this is becoming increasingly demoralising. 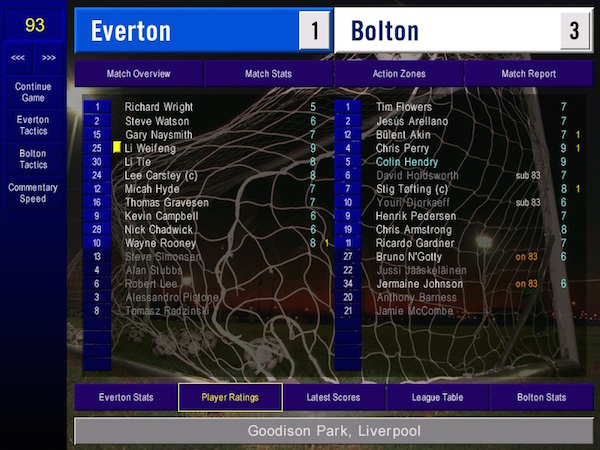 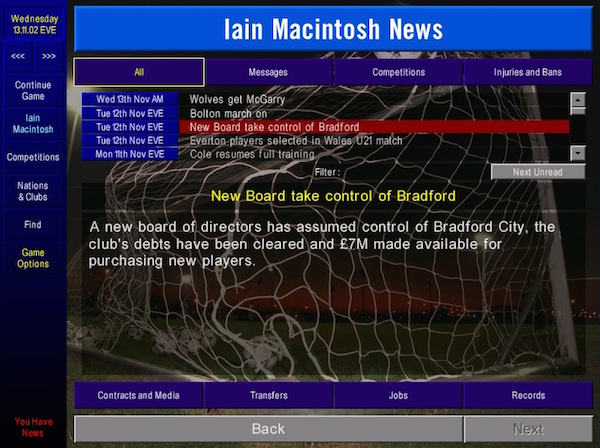 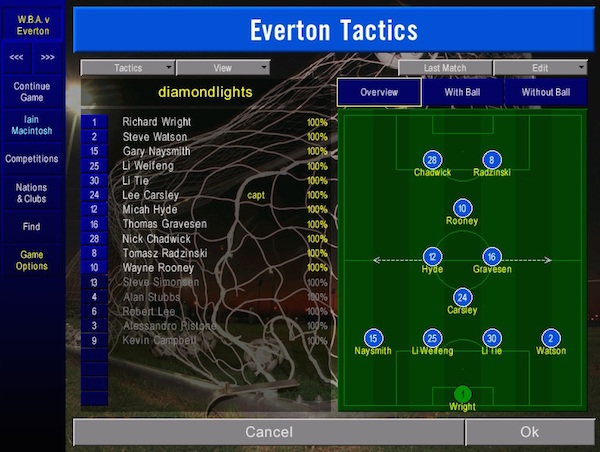 That was old-fashioned football. Lots of long balls from them, lots of meaty challenges from us. Micah Hyde gave us a first-half lead that we probably didn’t deserve. Lee Hughes left us with the single point that we probably did deserve. At least there’s some fight in there somewhere. There’s not a lot else though. 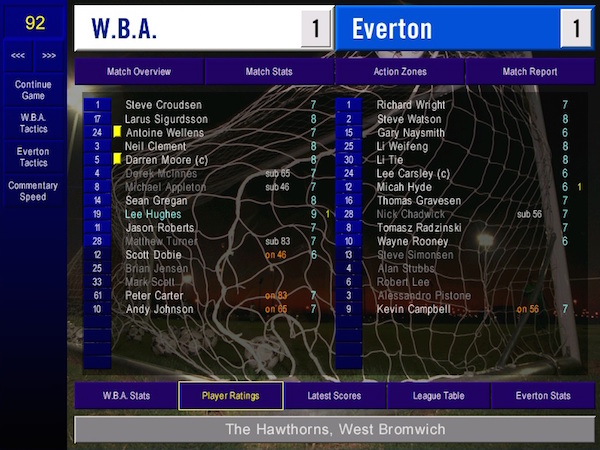 Arsenal have had a strange season. They spent big in the summer, bringing back Marc Overmars and adding Dennis Rommedahl for a combined fee of £12.75 million. But for some reason, they find themselves down in 8th. Still, they’ll be looking forward to this. We’ve lost Steve Watson to injury, but it’s not as if he excelled himself in his run in the team. Tony Hibbert comes in to replace him. And so we go again. 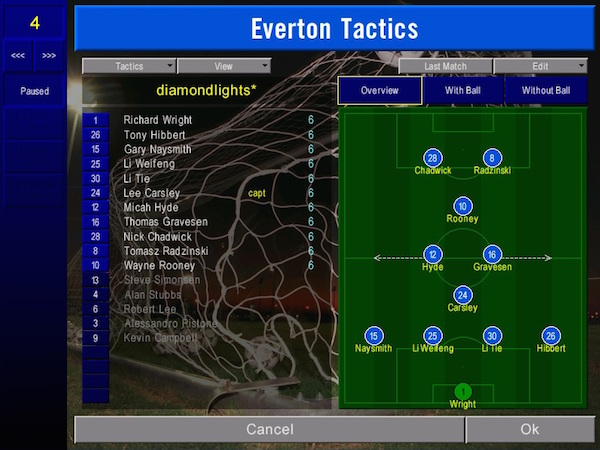 Battered. Battered again. We’re two goals down inside 20 minutes and even though Thomas Gravesen scores in the second half, we’re never really back in the game. Richard Wright prevents a massacre and bestows upon us the illusion of competence. We weren’t ever competitive. I’m starting to lose the will to live. 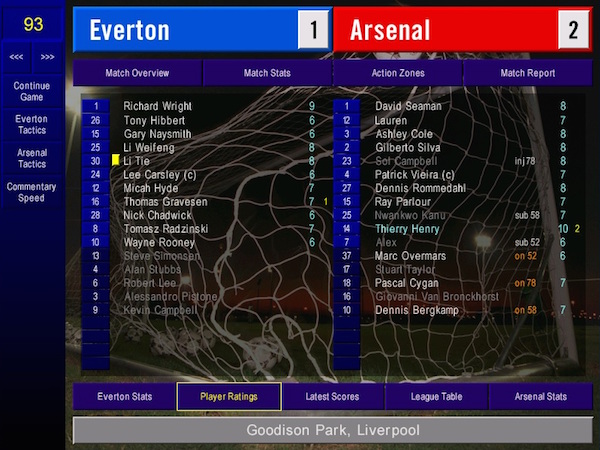 All the promise of October turns to ashes in November. Just a single point from the entire month and we slide back towards the gaping maw of relegation. The reserves continue to practice the back three, but to no avail. They’re far too useless to make it work and they’re repeatedly obliterated. You need the right players. You need quick, fit full backs and we’ve got Tony Hibbert and Alessandro Pistone. You need a world class number 10 and we’ve got an ungrateful and truculent Rooney. You need strikers who can score and we’ve got four trembling empty shirts. We need a re-think. If this carries on into December, we’ll be in serious danger of going down. Still, well done Bolton. 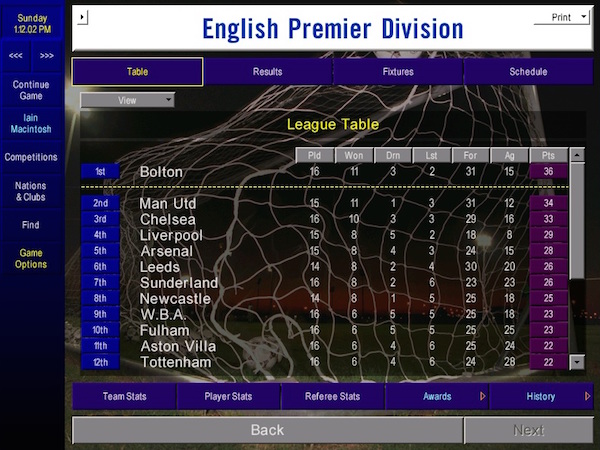 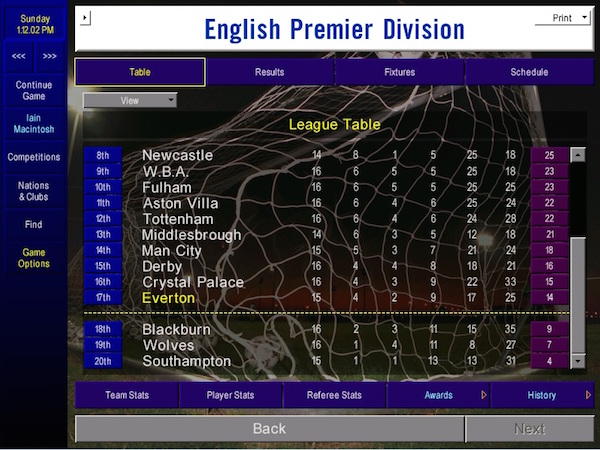