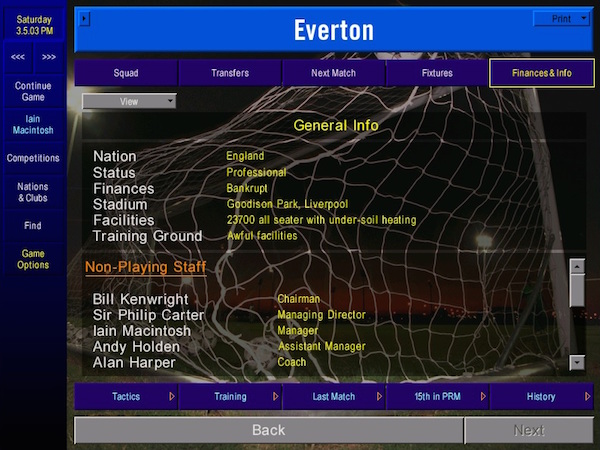 Our shituation has not improved. Oh well, at least we’ve still got the undersoil heating. That’s good. No matter how cold it gets this winter, we’ll still be able to entertain our 23,700 supporters.

It feels strange now. There’s no point in upsetting yourself about money. There’s nothing that can be done. This season, we brought in £5.5m from players sales, spent only £750,000 on new recruits, and yet the books say that we’ve lost £15m and are now £37m in debt. That seems relatively small by today’s standards, but this is 2003. There’s no way that we should be allowed to continue. Someone should have stepped in by now and locked the gates of Goodison Park.

I should be standing in a local sports centre running trials for Everton Phoenix in Division One North of the Evo-Stick League. And yet it does continue. I remain hopeful for new buyers, a clearing of the decks, the reopening of the stadium and, who knows, perhaps even some spending money. But until that day arrives, we must continue as best we can.

For now, that means ending the season in some sort of style. We welcome Chelsea to our partially condemned stadium this week for the final home game of the season. Claudio Ranieri has spent big, luring in Didi Hamman and Vladimir Smicer from Liverpool in the hope of winning the big prizes, but the Blues are back in fifth place, fighting Arsenal for a Champions League spot. They need a win here. 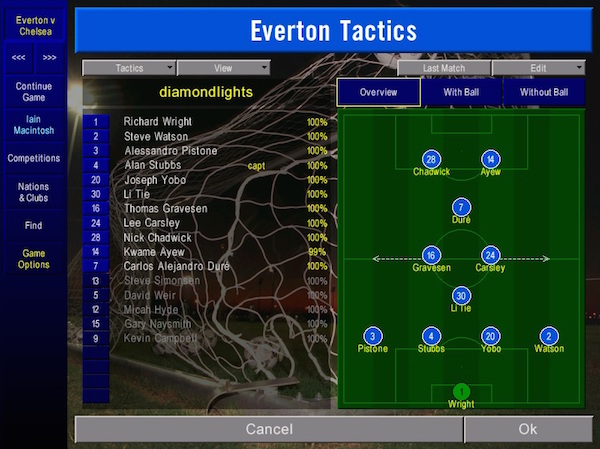 Chelsea score straight from the kick off through the irrepressible Jimmy Floyd Hasselbaink. Kwame Ayew equalises five minutes later. Hasselbaink scores again after fifteen minutes. Eidur Gudjohnsen makes it three before the half-hour mark. And all this happens in the time it takes me to frantically switch off the ‘very fast’ commentary mode that I left on for a reserve game.

I catch my breath, try to figure out what went wrong and in the next passage of play, Joseph Yobo gets a straight red for what sounds like a horrific challenge. The game is a write-off. I try to shut it down as best I can. My best isn’t even nearly good enough. Richard Wright has an absolute stormer. 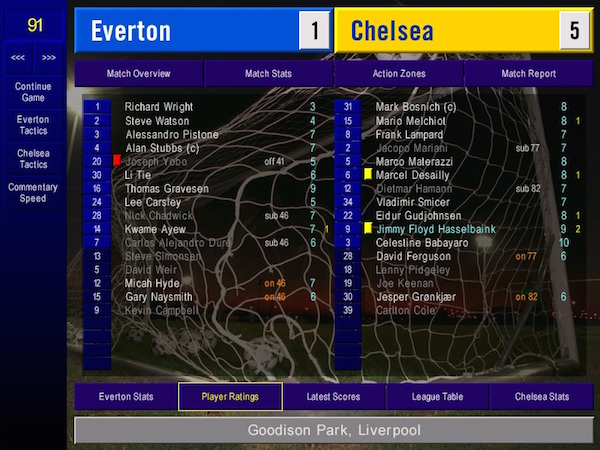 Scout reports continue to pile up on my desk, but gems are few and far between. Liam Miller from Celtic looks interesting, but even though his contract is up at the end of the season, he’ll still incur a £750,000 compensation payment, which is more than we have.

There is young Danny Senda at Wycombe, a limited full back with unbelievable pace. But can I really justify £100,000 on a player that I don’t think is very good at football? Not really. I continue the search.

Elsewhere, Manchester United celebrate their title success by beating Manchester City 3-1 at Old Trafford. Sir Alex Ferguson waited until March of this year before he bought a player, Jaap Stam, and has been content to rely on the existing squad. Hardly surprising. It’s an incredible team. 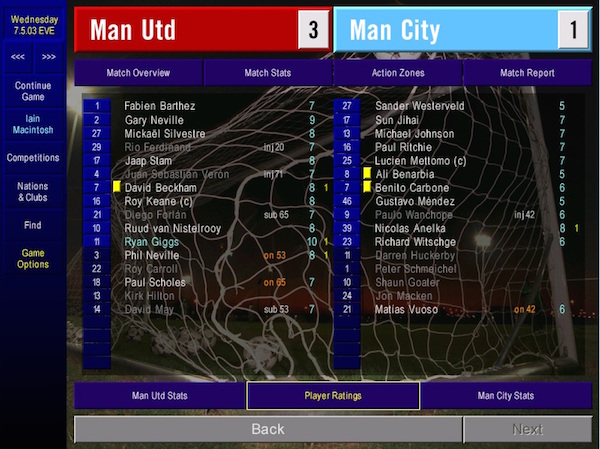 For the final match of the campaign, I experiment. We may need to be more pragmatic next season. We may have to behave in a way that we would find repulsive in others, but we have to be strong. We must entertain no fantasies. Next season will be awful, it will be a battle, it will be a knife fight in a swamp. We need to be hard. And so, after months of dispute, I’m bringing back Duncan Ferguson. We’re going long. We’re doing it live.

At least that’s the plan a week before the fixture. The next day, Duncan turns up late and out of sorts. His fitness crashes to 61%, which is no mean feat given that he hasn’t played a first team game in over a year. For the seventh time, I fine him two weeks wages. But this time, the players rise up in protest. 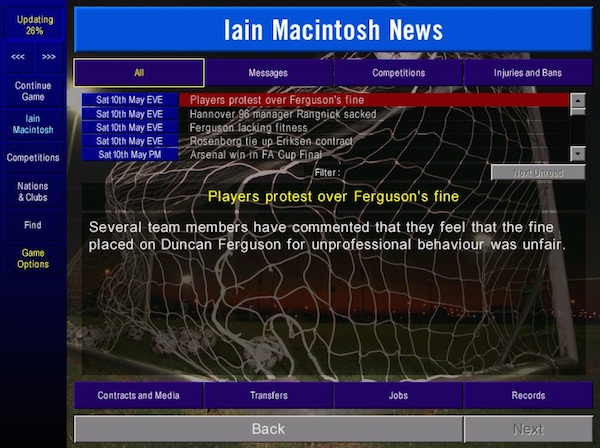 This is intolerable. I’m working my tits off trying to save this club, he’s barely showing a leg in training and they side with him?! I choose to ignore their protestations. Wankers. I make a note of their names. Naturally, Wayne Rooney is among them.

The minute, the very minute that the new owners come in, I’m selling the fucking lot of them. I won’t forget this. But I’ll leave Ferguson in the team in the hope that he is so desperate to prove a point that he inadvertently puts in a good performance. Now that’s management. 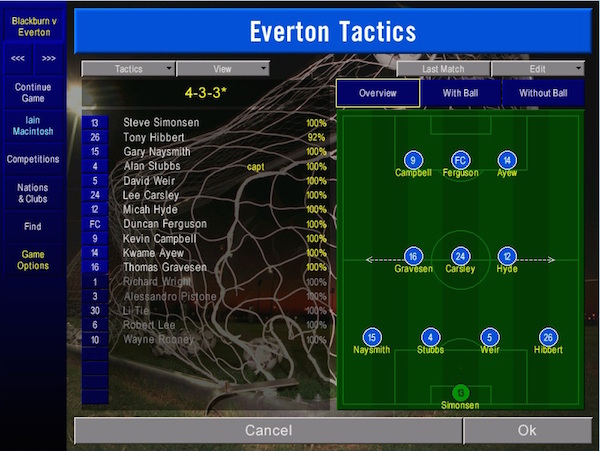 Blackburn score after a minute and we never get back into the game. They score in the last minute too, just to annoy us. Ferguson wins lots of headers, but doesn’t have a single shot on target. With 15 minutes left, he injures himself. It really is a first-class afternoon of fun and frolics. But it’s over. Thank God, it’s over. 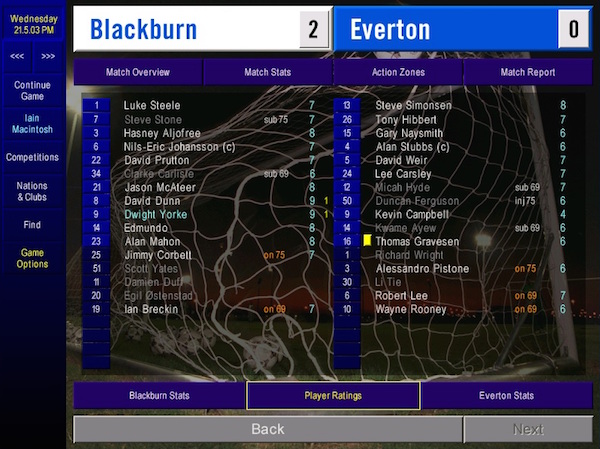 And there’s news of a takeover too. Lucky old Gillingham, eh? I’m sure they deserve it. 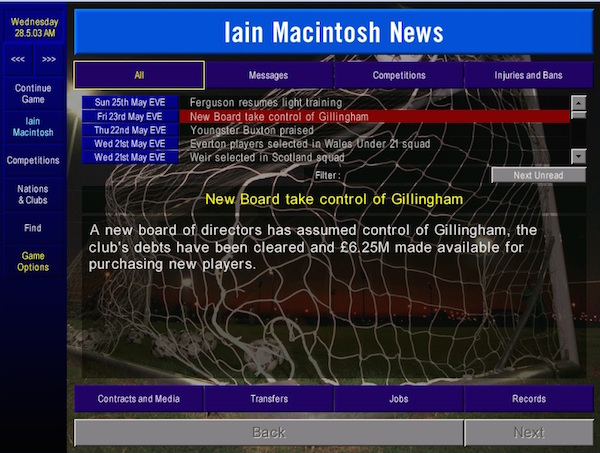 The only encouragement comes from the pile of scouting reports. Francisco has been on the fringes of the Sevilla team for two years and is desperate for first-team football. So desperate that he’ll even consider playing for us. He’s not an outstanding technical player, but he’s strong, quick and nasty and that’s what we need right now. I move quickly, offer him everything we have (£20,000 per week) and to my astonishment, he accepts. 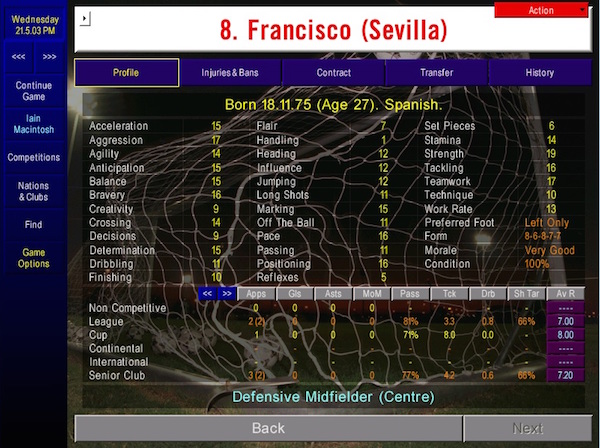 While we’re grasping at straws and pretending to ourselves that we won’t get relegated, the other side of town is having a party. Liverpool win the Champions League on penalties, thanks mainly to a fine performance from Jerzy Dudek. 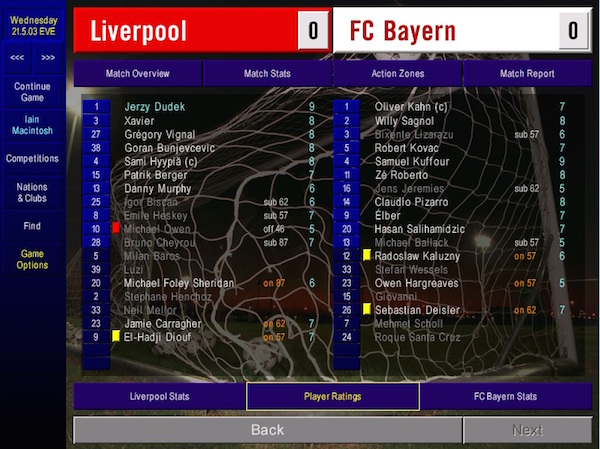 In the streets outside Goodison Park, red-shirted fans dance and sing, mocking us with their joy. I watch them for a while. One of them looks up, sees me and gives me the finger. His friends all laugh. Angrily, I draw the curtains and sit alone in the darkness, trying to control my breathing. Deep. Deep. Deep. In and out. Fill the bloodstream with soothing oxygen. Deep. Deep. Deep. 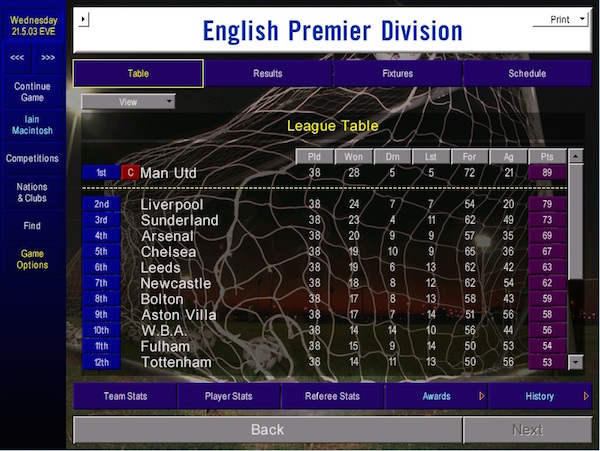 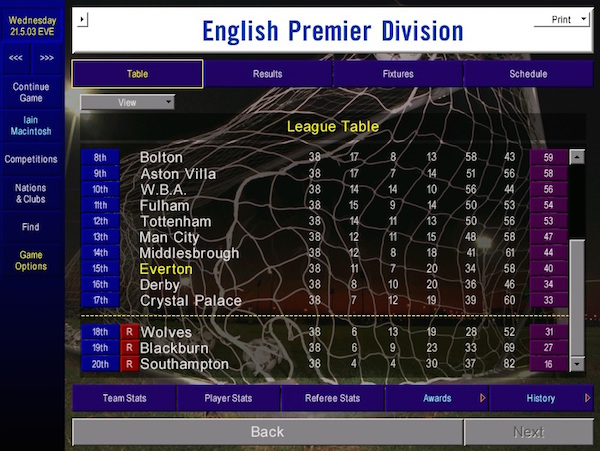