Ah, 2003. A year when watertight intelligence took us into a just and absolutely necessary conflict that was all wrapped up years ago, leaving no repercussions more profound than the peace and prosperity that has spread throughout the region.

With that same shrewd judgement and careful eye for detail, Everton limp into the new year. The debt is back up to £30m, the stadium is covered in yellow tape, reduced to a 26,000 capacity and the players are all as unhappy as the bank manager. Take my hand, my tear-streaked love and we shall dance as if the night holds no terror.

We learned much in December. Primarily, that it is not a good idea to tit around with the tactics that have served us so well. We must remain faithful to the diamond lights. Mainly because we have no wingers and we lack the means to acquire them. A more pressing issue, however, is the Bosman ruling. Now that it’s January, we are vulnerable. We’re always vulnerable anyway because our financial status means that any reasonable offer for our players must be accepted, but still…

The Chinese lads, Li Weifeng and Li Tie, have been outstanding this season, both averaging over 7.50, but they’re out of contract in the summer. Li Tie is a decent and understanding chap who seems entirely content with his new £10,000 per week deal. Li Weifeng is a little more truculent. He says he wants a new contract, but he refuses to discuss terms. I offer him the maximum allowed anyway, the full £20,000 per week, and he goes off to think it over. I hope he doesn’t tell Li Tie.

We host Sunderland on New Year’s Day, one of the powerhouses of the division with the remarkable Matthew Piper on the right wing. I make no changes other than a quick swap of the centre-backs to ensure that Alan Stubbs marks Tore Andre while Li Weifeng, who retains his place because I like a chap who haggles, takes Kevin Phillips. 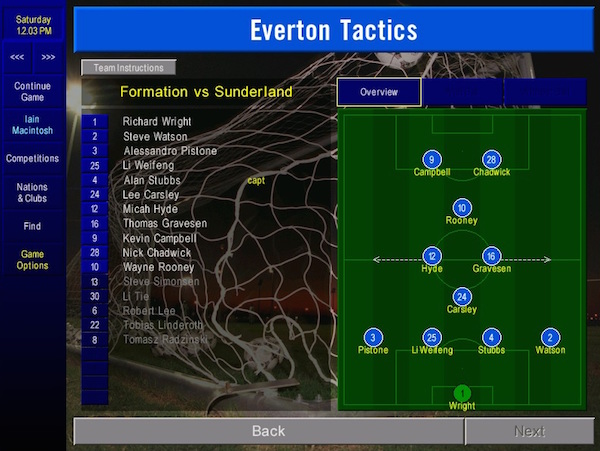 A fine performance in spite of my foolishness. I had underestimated Li Weifeng’s strength in the air and had failed to predict his inability to deal with Phillips. The Sunderland striker beat my defender to the ball on four occasions in the first ten minutes, scoring only once thankfully.

The shift was reversed, Stubbsy took control and Li Weifeng didn’t give Flo an inch. Goals from Thomas Gravesen and Wayne Rooney earned us three valuable points. Perhaps 2003 is going to be a good year after all. 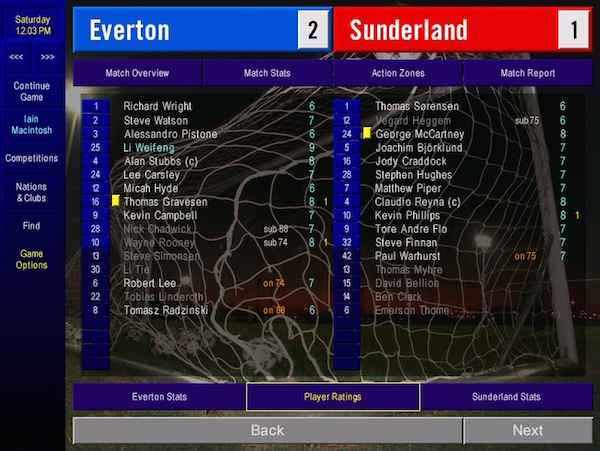 We move immediately to the third round of the FA Cup. Ordinarily, given the state of our books and the paucity of our squad, I wouldn’t care too much about this competition. However, the challenge is to win silverware with Everton, not to finish respectably in the league. Therefore, my only change is to rest the exhausted 17-year-old Rooney and give Carlos Dure a go in the hole. 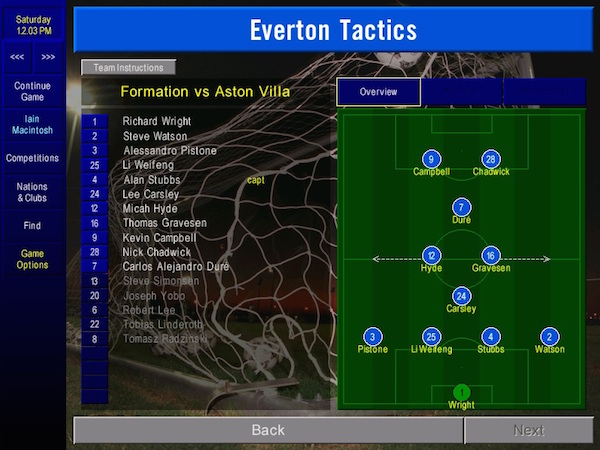 Another fine performance. What on earth is going on? Dure performs admirably. Perhaps I’ve been misusing him. He was hopeless up front, but if he can continue to rip teams apart from a deeper position, I could use Rooney as a striker instead. It’s something to ponder. As is the form of Micah Hyde, but as we’ve already established, it’s not as if I have much choice in that department. 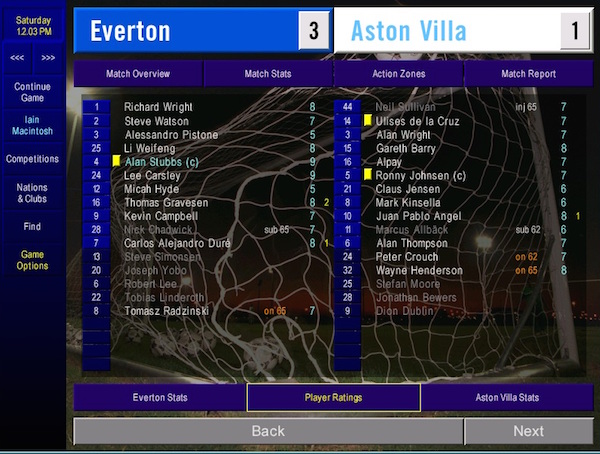 Oh, how I’d love to have some money to spend. Look at the state of Liverpool. In one day, they’ve spent enough money to put us back in the black and they’ve spent it on a single player. How am I supposed to compete with that? We’re in the same league in name only. 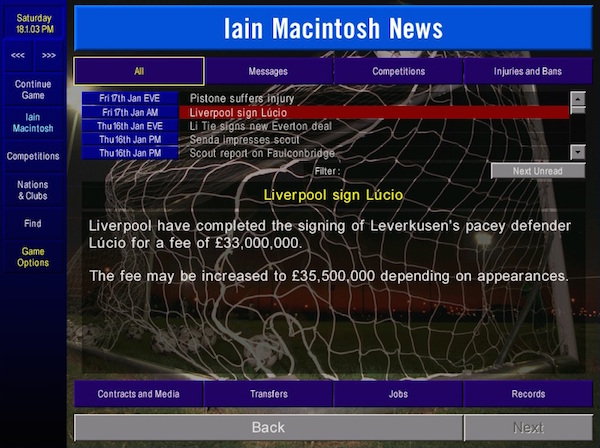 It’s Aston Villa again, this time in the league and this time at Villa Park. Given how well we performed at Goodison Park, I send out an unchanged team and hope for a similar result. Well, why bother changing it, eh? 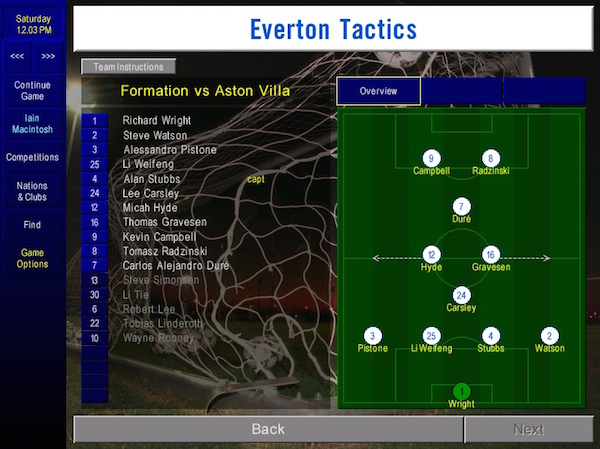 Ah, that’s why. Because we’re shit. Dure is nothing to me here. Villa don’t just beat us, they hold us at bay like a school bully with his hand splayed out over our face, our tiny fists swinging and missing again and again. It’s all so familiar that it stings. 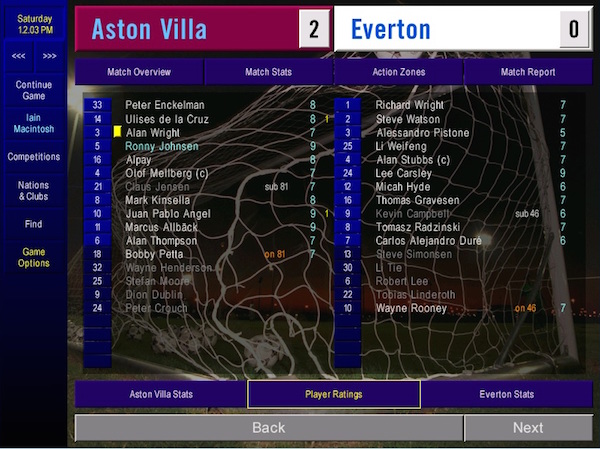 And to continue the sense that nothing ever changes, Duncan Ferguson turns up late for training again. I fine him two weeks wages and he tells me he’s shocked. I can only presume that he’s being sarcastic. We do this every month. I’d be surprised if he’s managed to make a single mortgage payment since November 2001. 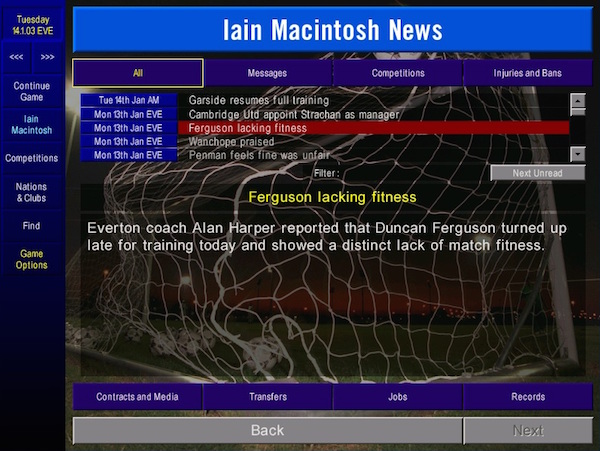 Tottenham, bloody Tottenham. With their weird asymmetric formations and their underperforming, highly paid players. Which Tottenham will we get today? 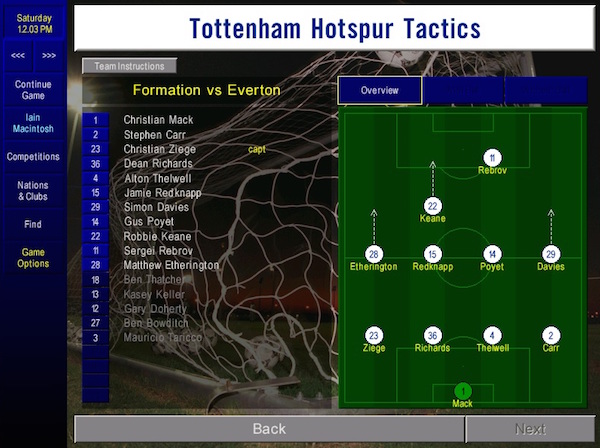 Ah, that one. Well, it’s time for judicious man-marking and the plaintive hope that we’ll get something on the break. 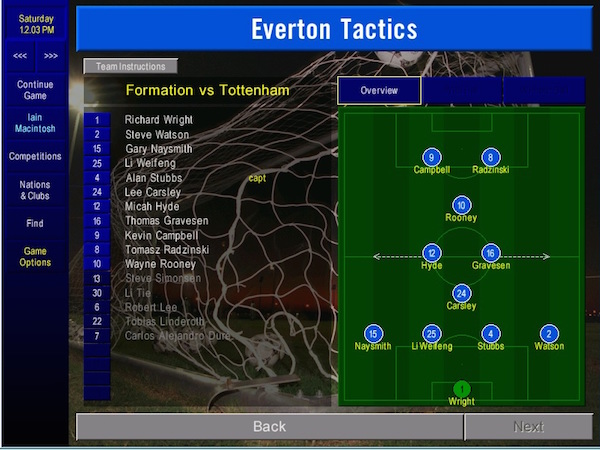 I don’t know why I bother. It’s just the same old shit from one week to the next. That was rubbish. But of course it was rubbish. We’re rubbish. This whole game is rubbish. 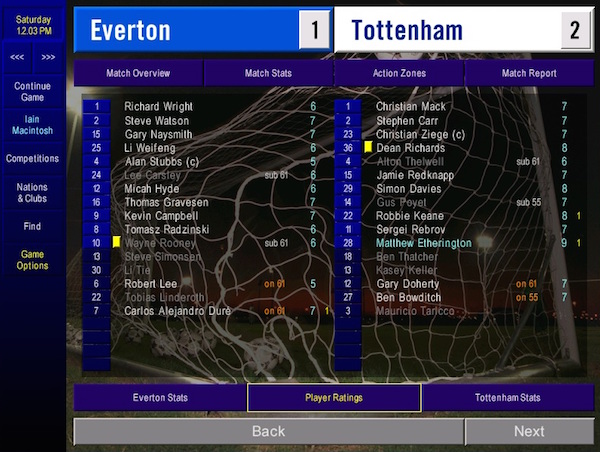 I didn’t mean that. I love this game. It’s just a bit of a twat.

Roaming sadly around the screens, I note with interest that the board has left a £475,000 allowance in the figures. I don’t know why, it doesn’t make any sense all things considered, but I think the best thing to do is to spend it quickly before anyone changes their mind.

I launch into an epic search of the transfer market. Even though we’re broke, I’ve still had scouts watching every league and I’m able to specifically search for people who can pass (we still have some standards here) and who are cheap. And I find this guy in Sporting Lisbon’s reserves. Surely he can do a job? Look at those stats! Down goes £375,000 and in he comes. 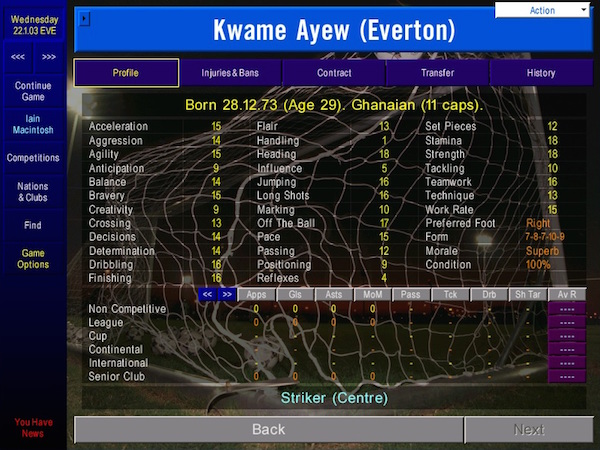 Of course, the scouts were far more impressed by this guy, but even the pitiful £600,000 price tag is too much for us. This is the very definition of frustration, but I shan’t dwell on it. We are not at home to negativity. 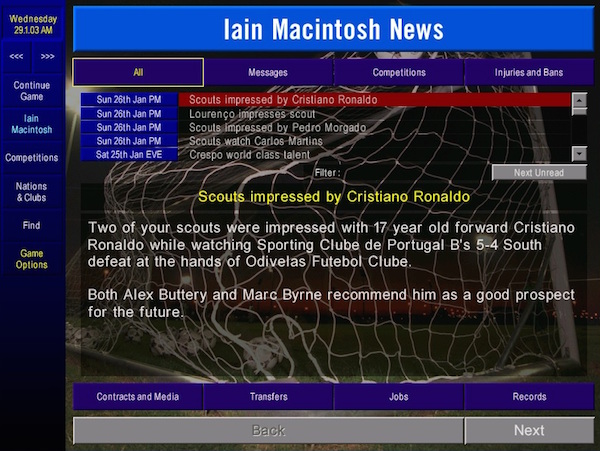 Especially as we’ve got Gillingham in the cup. Gillingham! They’re crap! They’re 22nd in the second flight and woefully out of form. What better place to introduce a debutant to rough and ready English football? He’ll clean up here. 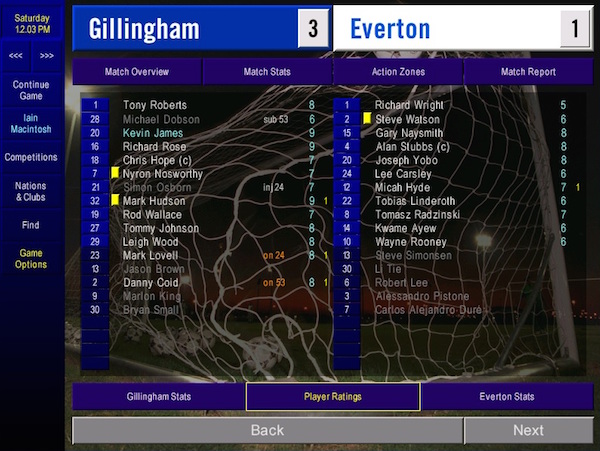 For fuck’s sake. Can anything else go wrong? 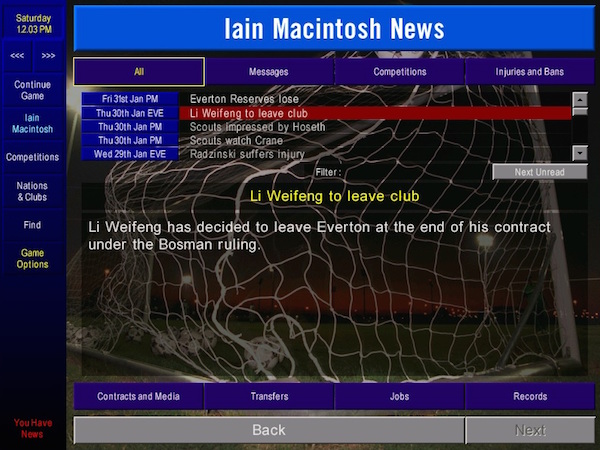