They say that the form book goes out of the window for a Merseyside derby and, once again, that can only play to Everton’s advantage. We’re desperate this season, capable only of picking up results against the crappest of opposition. And annoyingly, Liverpool are not crap.

While Gerard Houllier’s decision to spaff £9m on Goran Bunjevcevic was something of a mystery, there’s no doubt that he continues to improve this football club. They finished second last year, they’re in the title race again this year and they will be runaway favourites against us.

We cannot continue to bang our heads against the wall with our standard ‘diamond lights’ formation. It’s just not working anymore. It’s time to tear it up and start again. The one area in which we’re well stocked is defence, so it’s a back three and Alan Stubbs returns. We are starved of width, so we’ll make a go of it with Gary Naysmith on the left and Joseph Yobo on the right. The midfield three pick themselves and we’ll push Rooney up front. It’s zonal marking, short passing, press the shit out of them and hope it works. Christ. 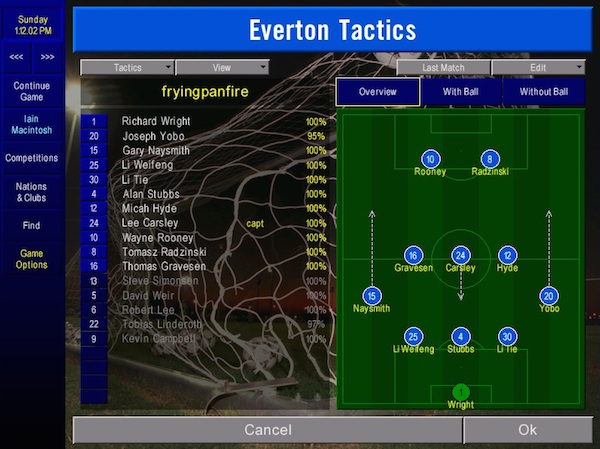 Liverpool are 2-0 up after just nine minutes. At half-time, we haven’t created a single opportunity of any sort, most of our players are giving fives and Richard Wright is on a nine. I have to change it again. Rob Lee comes on as a defensive midfielder and we switch to a 4-1-3-2 with all the numbers in the middle. It ends 3-0. We didn’t create a single opportunity of any sort in the entire game. 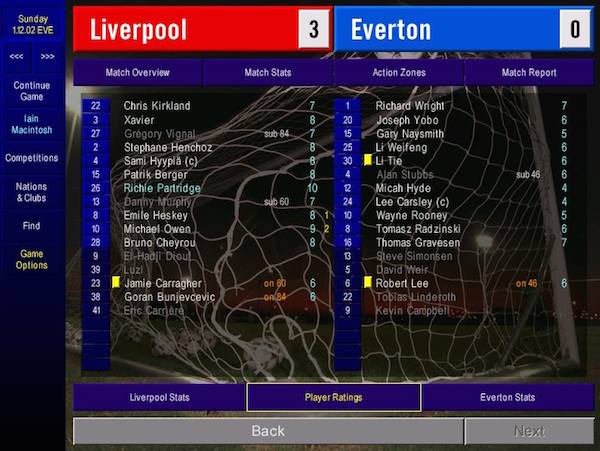 Lesson learned and now I can’t go out on Merseyside for at least three months. Changing the formation was, in hindsight, a bad move. I suspected that we didn’t have the players for it. I should have trusted myself. Back to diamond lights, we go. It’s the most sensible course of action against Manchester City, who continue to play a 4-4-2 with Ali Benarbia making forward runs. We can dominate the midfield. 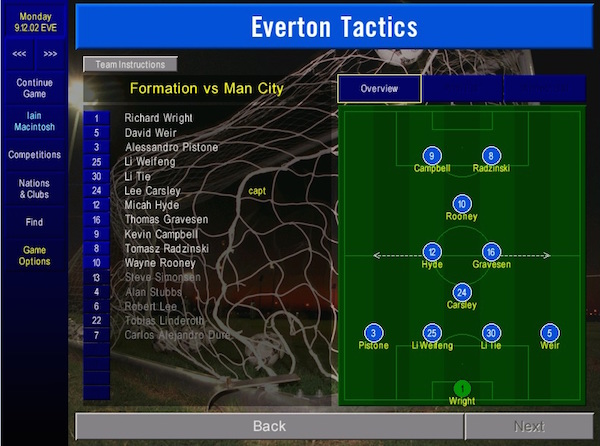 And that’s exactly what happens. It’s one of the rare occasions this season that everyone has done everything that they were supposed to do. Kevin Campbell opens the scoring, substitute Carlos Dure, on for the misfiring Tomasz Radzinski (one goal in 14 games) doubles the lead and City are no threat whatsoever. A ray of sunlight breaks through the clouds over the reduced capacity Goodison Park. 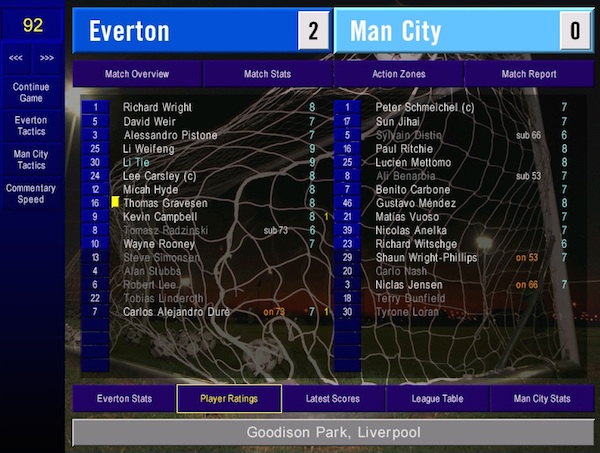 Having broken that horrible run of bad results, it would be nice if we could have an easy fixture to build some momentum. Alas, we’re away to Claudio Ranieri’s title-chasing Chelsea. However, like City, they’re vulnerable to the diamond. All you have to do is stop Gianfranco Zola. How hard can that be? 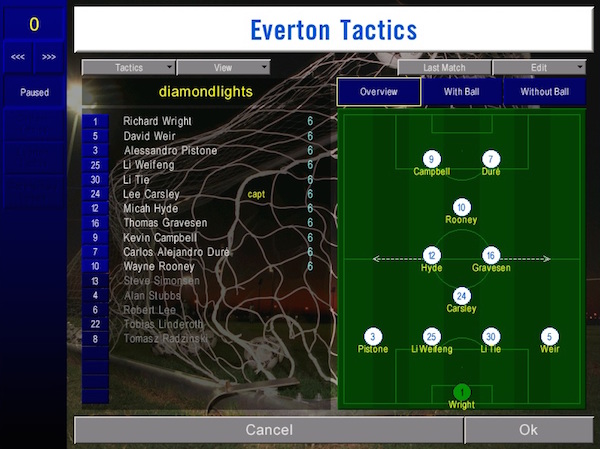 Well, we stopped Zola. Indeed, we stopped Chelsea. It’s just that we didn’t really do much for ourselves. One shot off target was the sum total of our efforts. And yet, I cannot be angry. Four points from two games is a considerable improvement and we’re now eight points clear of relegation as we approach the halfway stage. We have improved dramatically and, by thunder, we’ve earned the right to call ourselves mediocre. 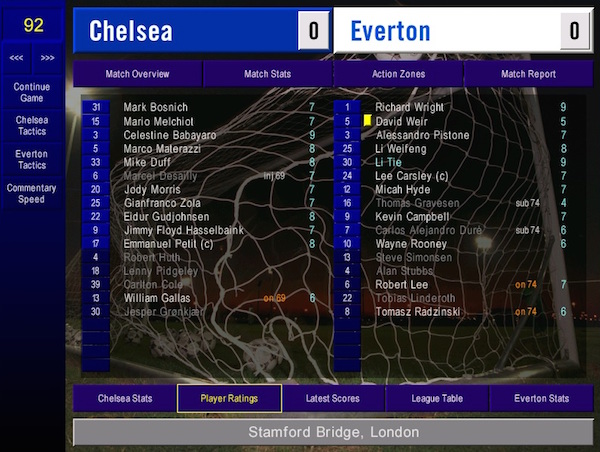 Now we’re talking. Southampton away. Southampton are terrible. They’ve won just eight points all season and even in our darkest days, we usually beat them. There can be no slip ups this time. We need the points. I am a little perturbed that they beat Leeds United 2-0 in their last game, but surely that was just a one-off? 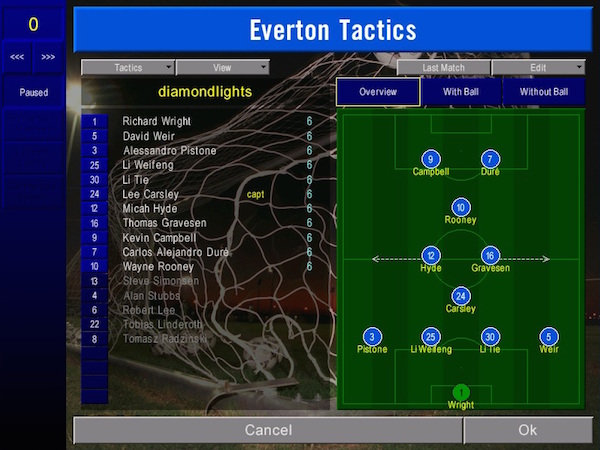 Strangely satisfying and for all the wrong reasons. It wasn’t a one-off, Southampton are unnaturally confident for a team of such profound uselessness. They batter us in the first half, score through James Beattie and are highly unfortunate to go in level at the break after a Rooney long range effort sneaks past Paul Jones.

I make frantic changes. Weir is a spent force, so on comes Stubbs to mark Beattie while Li Tie moves out wide. He obviously doesn’t like it out there, he’s sent off before the hour. We re-jig again, losing the attacking midfielder, moving Rooney up front and putting Carsley at right back. Not only do we hang on to our point, but we look the more likely side to win it. Three games without defeat and five points in the process. As Andy Townsend would say: better. 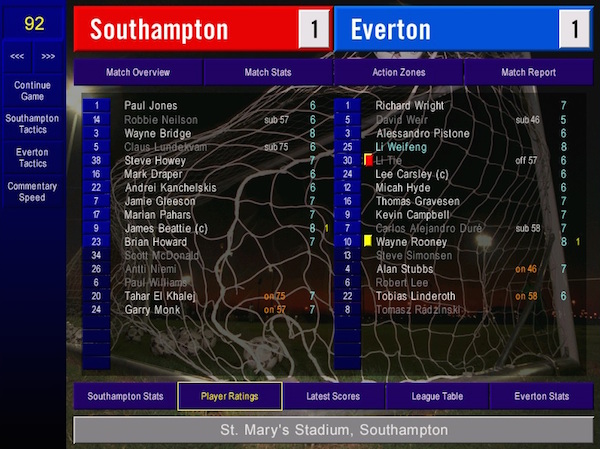 In other news, it’s nice to see that someone got their perfect Christmas present. 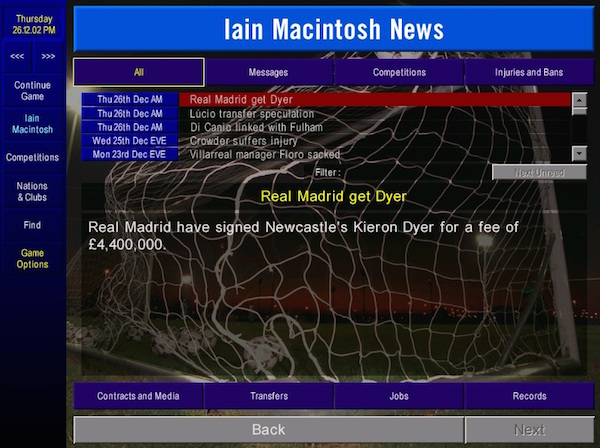 Average Middlesborough are the next visitors to Goodison Park, with their average manager and average team. We make a few changes. Li Tie will spend some time thinking about what he’s done and Stubbs, who is shocked that I don’t treat him as a first-team regular, will get a run back in the centre of defence. And, for the sixth time, I’ll try to make Steve Watson at right-back a thing. 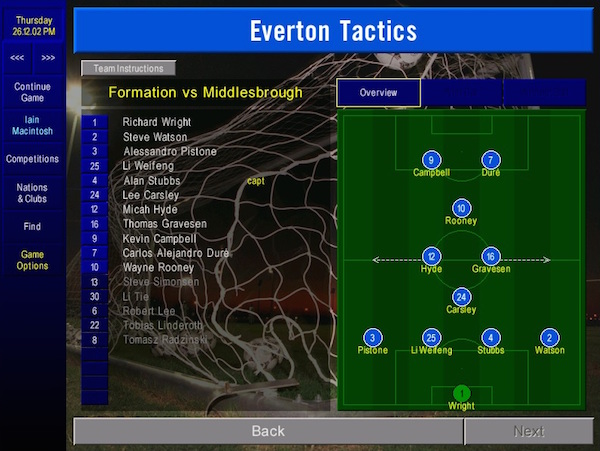 And we’re right back to square one. We played okay, we didn’t do anything wrong. Middlesborough had two chances and scored one of them. We had six and scored none. We don’t score many. Rooney has hit five, Carsley three, but none of the strikers are past two yet. That’s pretty poor. Nick Chadwick will partner Kevin Campbell for the next game. I’ve had just about enough of this shit. 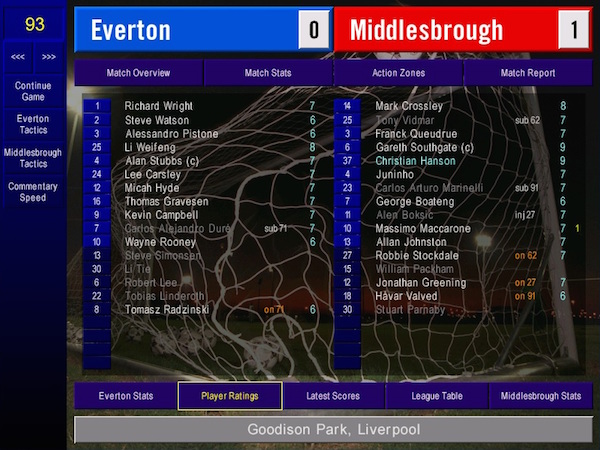 And so to Harry Redknapp’s Blackburn Rovers, victors in only two of their 20 games this season and one of the few clubs we’re above in the table. Failing to win this game would be unforgivable. But three points, my goodness me, three points would prove most useful. We go again, gentlemen. We go again. 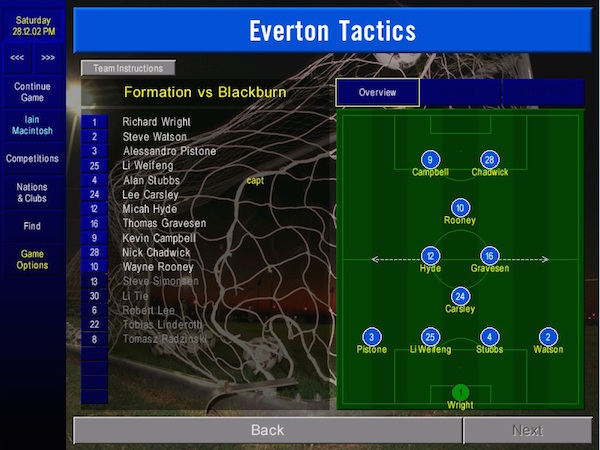 Unbelievable! Blackburn are savaged by wave after wave of attacks, but Carlo Cudicini is equal to everything. Deep into the second half, wracked with stress and frustration, I move Carsley and Rooney up to create a 4-3-3. Still no breakthrough. And then, in the last minute of the game, Nick Chadwick breaks through and hits one. We’ve won! Two wins in a month! What a way to end 2002! 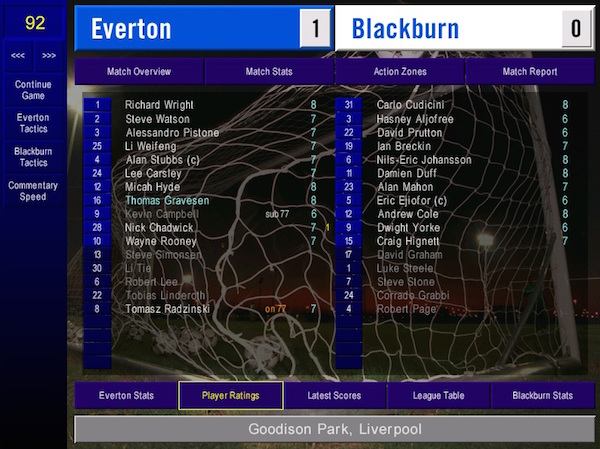 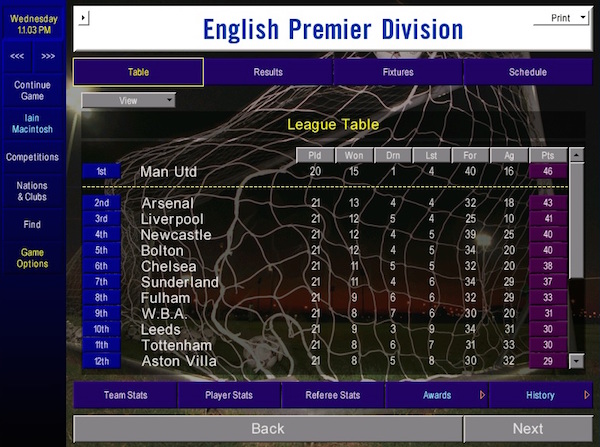 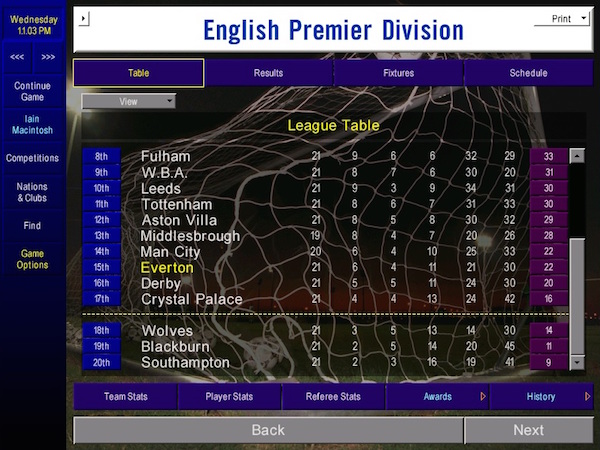 I feel invigorated, refreshed and ready to crack on. Yes, it’s been a hard six months, but look at what we’ve achieved. We’re just about competitive in the Premier League despite our financial struggles. We’re eight points clear of relegation and improving, so we should be safe this season.

Okay, so we’re £29m in the red and three punitive visits from Health & Safety have reduced the stadium and with it our ability to earn money, but even so, we should reduce the debt by half over the summer with TV revenues and prize money alone. That would put us on track to clear all of it by the end of the 2004/05 season. Who needs a takeover, eh? I’m feeling pretty good about this now. Wait, what? 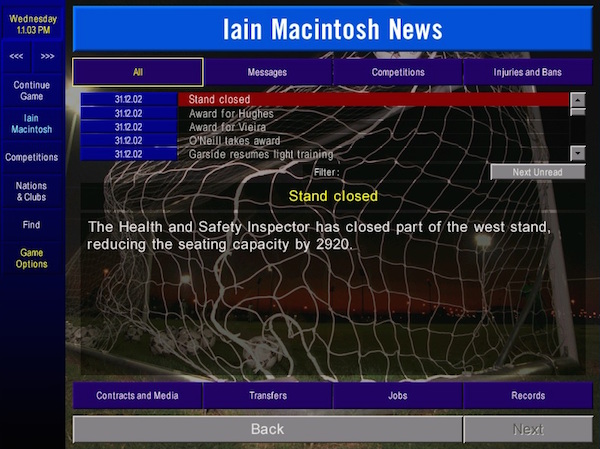