Now…where were we? Before a dramatic change in personal circumstances and a first festive period in over a decade that could legitimately be considered as a break, I believe I was steadily making progress with Everton.

Sure, we’d been beaten out of sight by Bournemouth and Tottenham in the first two games of the season and I was struggling to make the best of a weirdly unbalanced squad, but we’d made it to the Europa League group stage, picked up back-to-back league wins and were sitting safely in the middle of the table. I think we all know that it’s been much worse than that in the past.

I did notice some acerbic comments on social media regarding my decision not spend any money in the transfer window. This is entirely fair. It does seem odd to complain about a squad that is not fit for purpose, while simultaneously refusing to go shopping. However, it should be noted that £20m is not a lot of money these days. With no one position markedly weaker than any of the others and with multiple bids for players rejected or met with ludicrous valuations (£72m for Nathan Redmond?) it felt like discretion might be the better part of valour. The money will keep and we’ll spend it in January. I’m unbeaten in five, so there’s no crisis.

There is, however, a chance to avenge ourselves on Bournemouth for that opening day embarrassment. We have them at home in the League Cup and I think it’s worth playing a strong side here. Kevin Mirallas, who was supplying so many chances from the right before his injury, is back and with Gylfi Sigurdsson taking Ademola Lookman’s place on the left, I want to give the kid a chance up front while Sandro is indisposed. We’ll play a little deeper this time, to avoid being caught on the break by their rampant pace. And we’ll believe in ourselves. I think that’s the most important thing. We’re on a good run of form. We’ve stabilised. We can only get better from here. 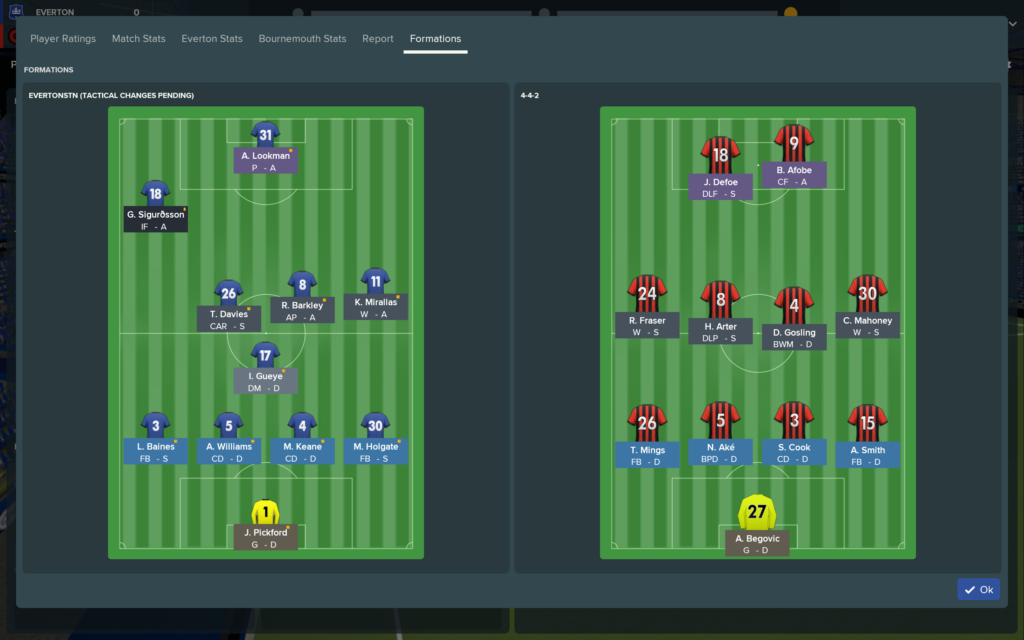 I really hate Bournemouth. It doesn’t seem to matter what you do, they always get you on the counter. We start reasonably well, but we’re snatching at chances and moves are breaking down for the want of a smart pass. And then Connor Mahoney pops up to turn in a low cross at the far post. Low crosses are supposed to be my thing. I’ve told the players to do them, but I haven’t seen one yet all season. At least this vindicates my belief in them.

To make matters worse, I lose Mirallas just before the break to another injury. We step up a bit, trying to get back into the game and obviously Bournemouth capitalise; another long ball over the top, Benik Afobe runs on to it and Pickford has no chance. Another brace of substitutions makes no effect and Asmir Begovic prevents us from even hinting at a recovery. So much for the League Cup. 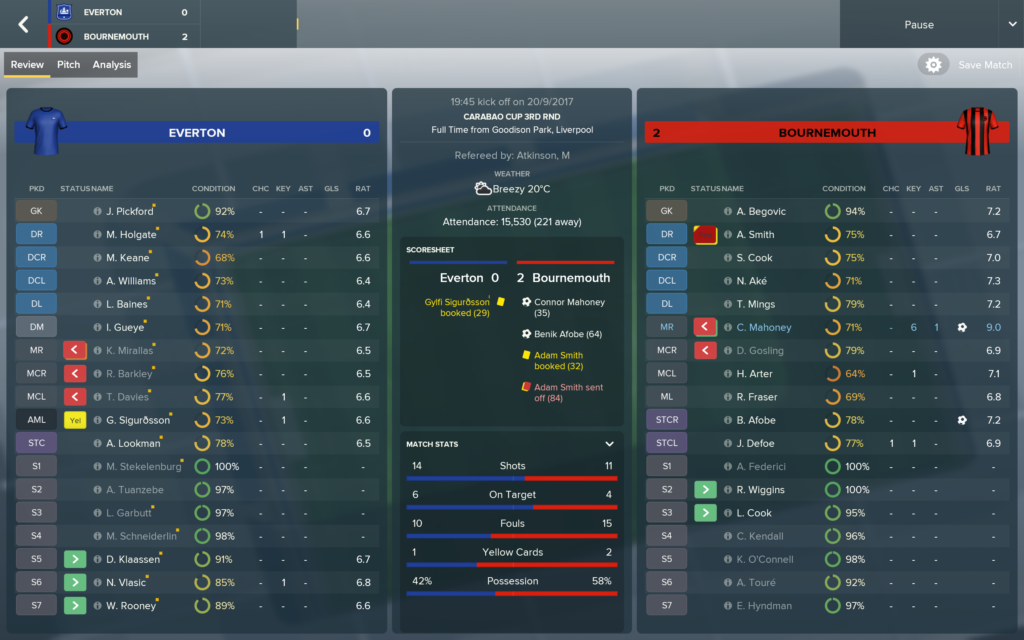 I need to get more out of this team. With Sandro still crocked, I toy with the idea of a return to 4-4-2. The lone striker always seems to get isolated in our normal shape. If I combined the presence of Oumar Niasse with the pace and vitality of Lookman, it’s just possible that I could start making the most of our chances. With two mobile central midfielders, Idrissa Gueye and James McCarthy, we should be able to compensate for the loss of dominance in the middle. It’s Stoke City at home, so it’s got to be worth a go. 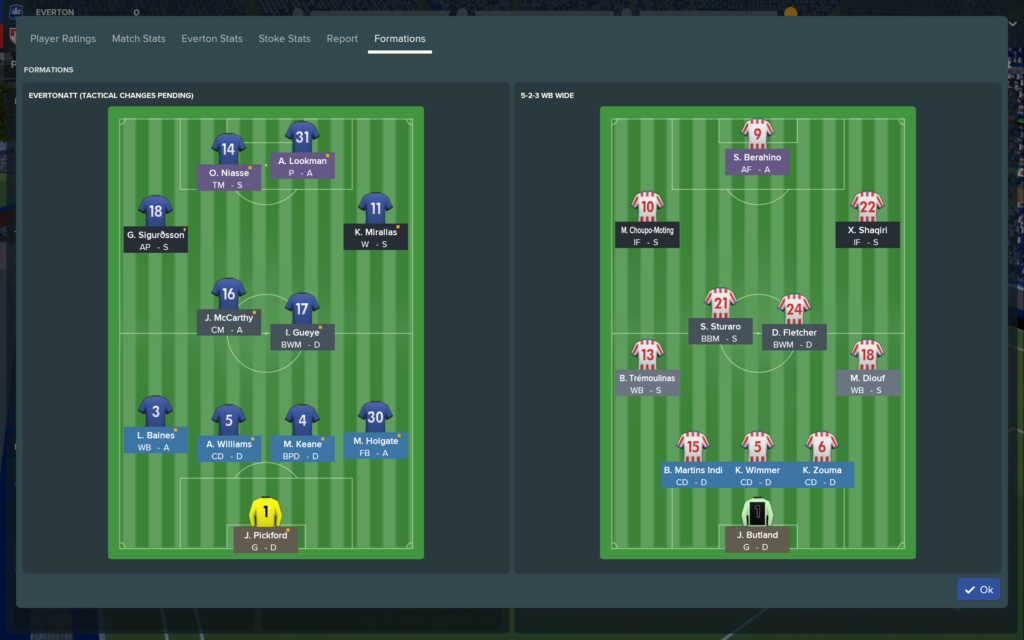 No, it wasn’t worth a go. After three minutes, Mason Holgate is caught out at the back and Saido Berahino scampers in to score what will prove to be the winning goal. Without the control of the midfield, Stoke cause us problems all afternoon, their profligate finishing preventing the game from vanishing out of sight. Niasse is bobbins and Lookman isn’t much better. We make just a couple of decent chances, with Sigurdsson at least doing something to lift the crowd, but it comes to nothing. We’re sliding again, I can feel it. 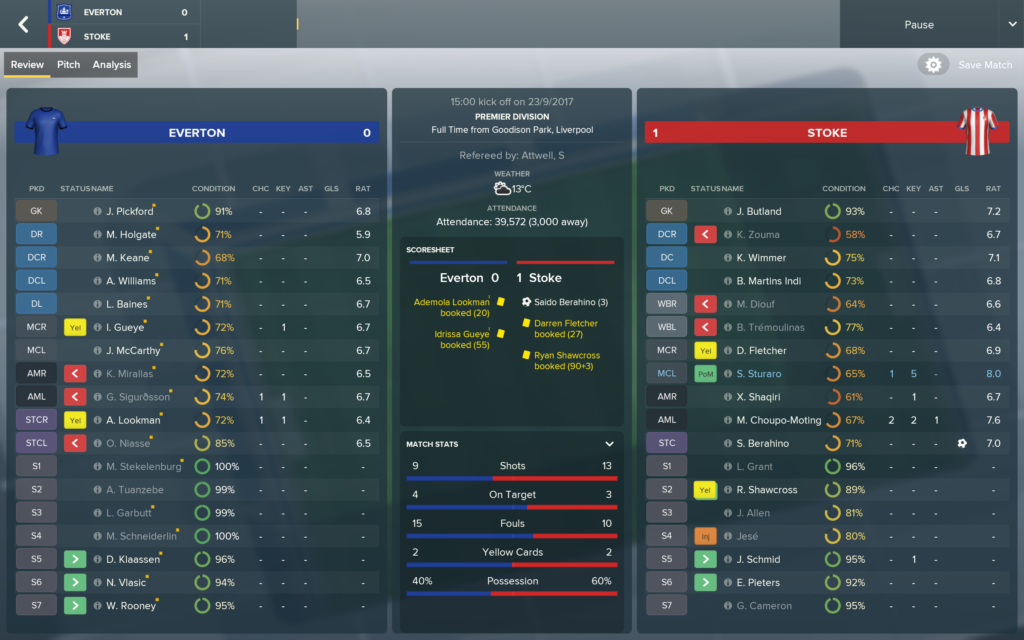 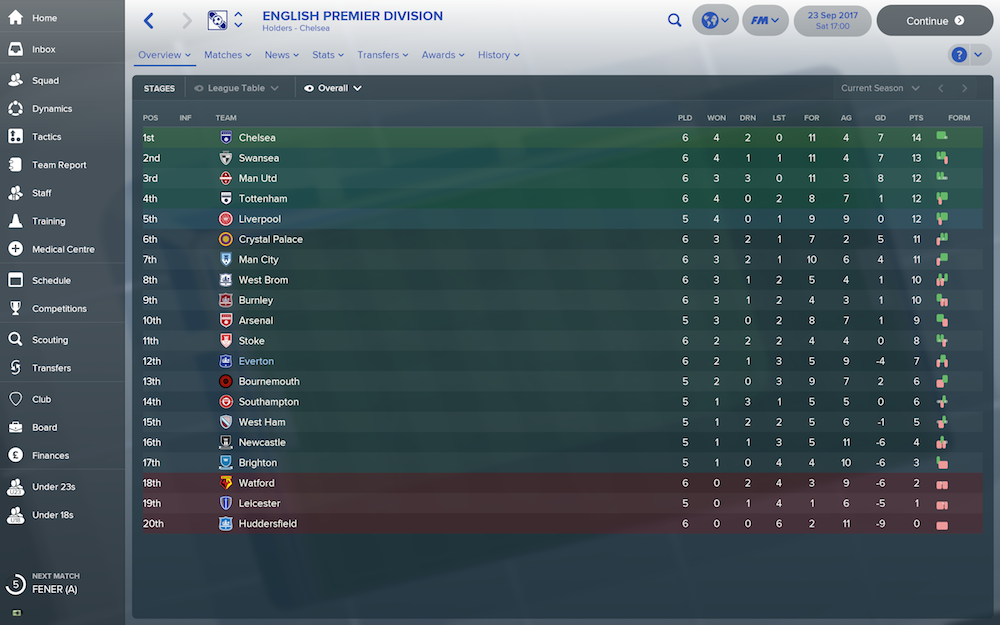 I’m not making that mistake again. In fact, I think it’s time I gave up on this fancy dan asymmetric stuff and just went back to my old faithful 4-1-4-1 with a deep-lying front man and concerted efforts to get the ball out wide, hit them on the counter and play low crosses in to an advancing pack of attacking midfielders. It worked for me at Celtic and Arsenal on FM17, there’s no reason why it shouldn’t work here. Unless, of course, the SI coders were reading and eradicated the vulnerability on the basis that something must be systemically wrong with the game if I’m doing well.

We’ll get the pace from the flanks, with Jonjo Kenny and Luke Garbutt racing up behind Lennon and Lookman. Ross Barkley and Davy Klaassen should be effective supporting midfielders and I’ll let Schneiderlin have a crack at guarding the defence. 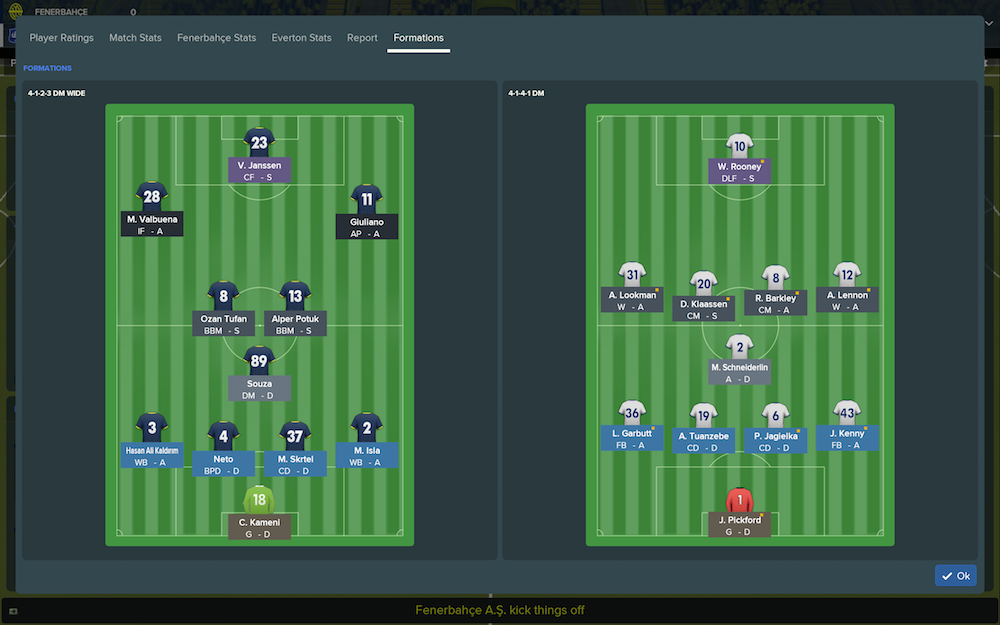 Not too shabby. I won’t turn my nose up at a point away from home in Europe. Rooney was predictably awful, but within four minutes of his departure, we equalised through Nikola Vlasic, thanks to a good run and low cross from Lennon. It’s just like old times. Except that my expectations are far lower and we’re not in any danger of winning anything. 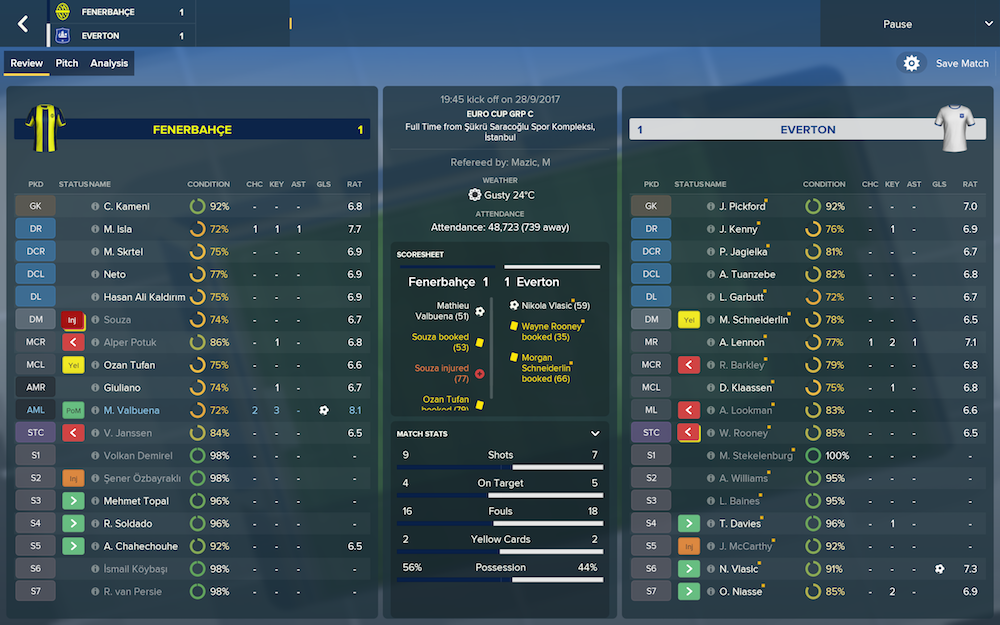 Now let’s see how those tactics work in the Premier League. We’ve got Sandro back, we’ve got fresh legs after another bit of rotation and we’ve got Swansea away. The Swans have been a bit of a surprise package in the league so far and they’re flying high in the table, but they are still indubitably Swansea and therefore we should have nothing to fear. It is long past time that we showed this division what Everton are all about. 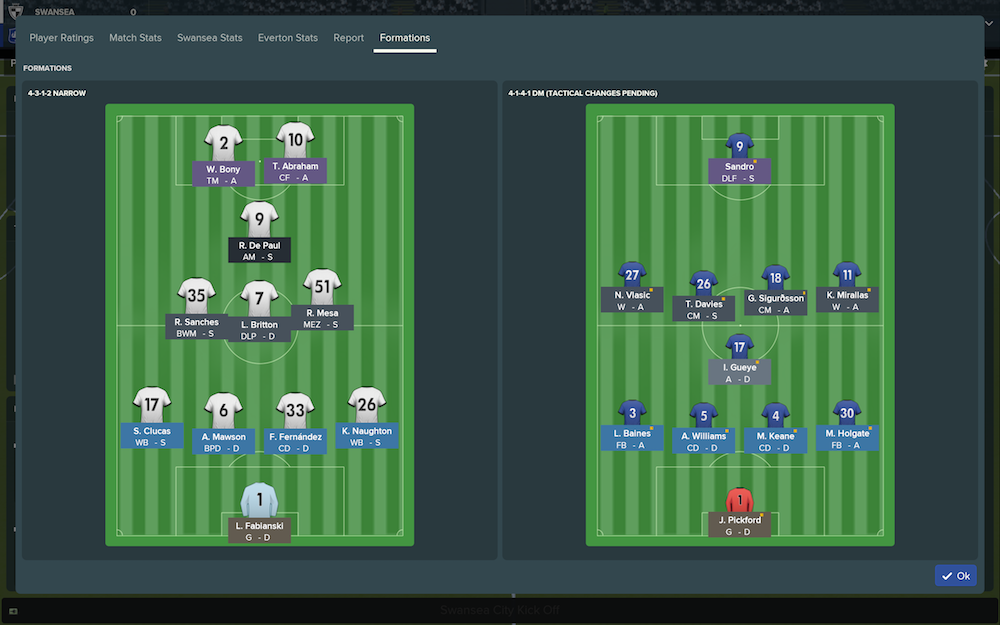 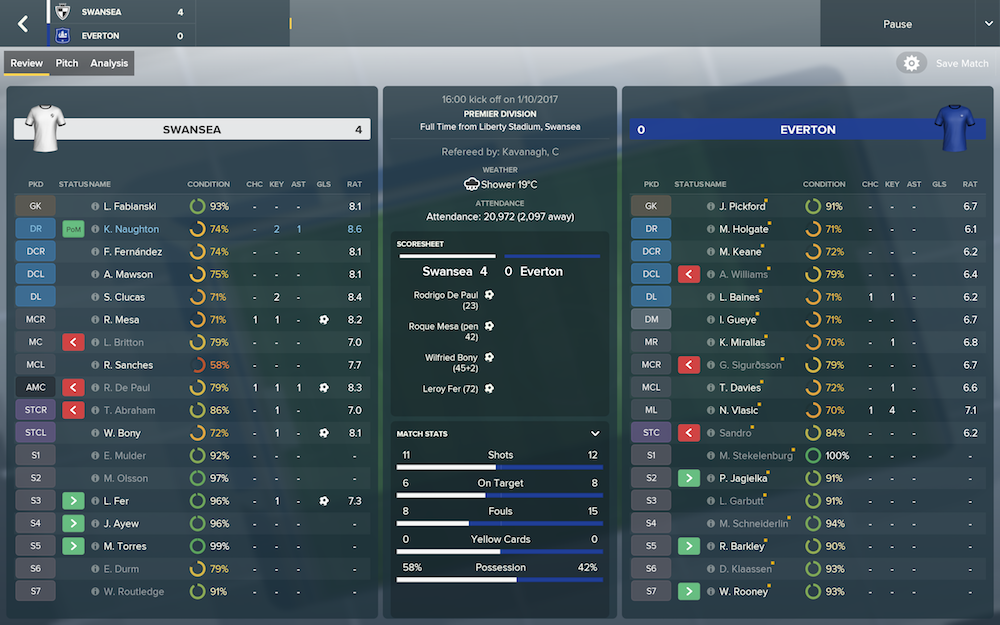 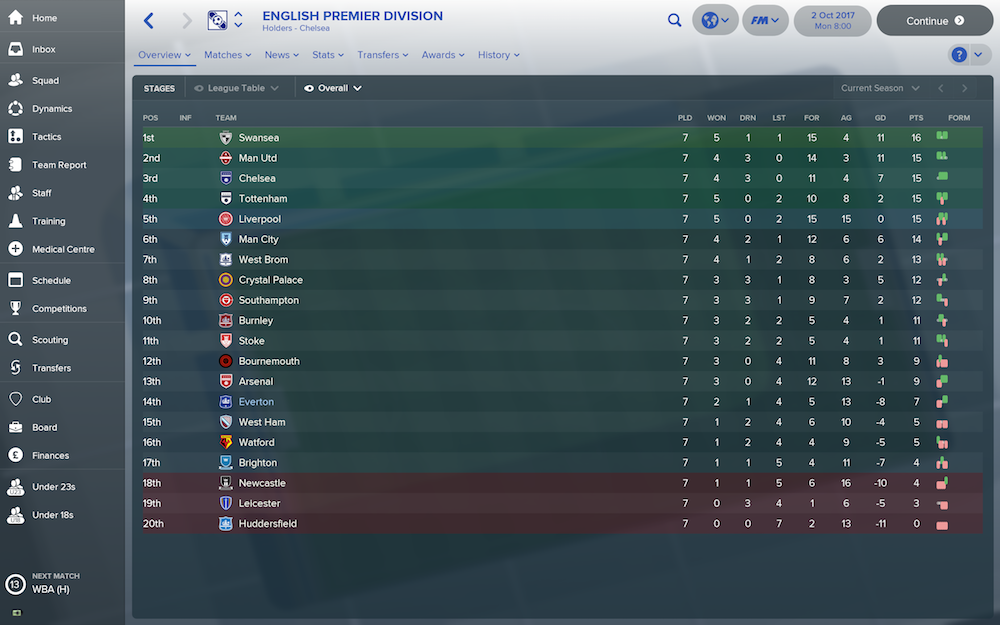