Time is running out and the transfer window is set to close. I have the most unbalanced squad I can recall managing and I need a complete overhaul. But in an effort to avoid a complete breakdown in morale, I’ve resisted the urge to launch a fire sale. And, of course, it would be silly to sell everyone without giving them a chance to prove themselves. Look at Sandro. Based on his real life contributions, I’d have him out the door and melted down for glue. But in my team, he’s scored five in seven.

But I’ve only got £20m. That’s not really a lot for a team with European aspirations. And where do I spend it? With Sandro in such good form, is it wise to buy a striker? I’m only going to play one at any given time. I could do with some pace on the flanks. I certainly don’t need any attacking midfielders, or defensive ones for that matter. We have half a dozen centre-backs and I’m more than happy with Jordan Pickford. That leaves the full-back positions, where Leighton Baines is getting old and there’s no real cover for the crocked Seamus Coleman. But my scouts haven’t had enough time to build a proper network yet. I could take a chance on someone, or I could hold the money and save it for January.

I make a dozen or so enquiries for players I’d like, but all seem happy in their surroundings. Most, like my swoop for Ben Chillwell, are rejected out of hand. Others, like my enquiry for Nathan Redmond, result in ludicrous valuations. £72m? Even Pep Guardiola doesn’t like Redmond that much. And so the window closes without me spending a single penny. If I survive until January 1, this will have been a masterstroke. If not, I may have to spend some time away from Twitter.

In the meantime, our struggles to meet UEFA’s squad parameters for the Europa League mean that I have to leave a couple of players out. Cuco Martina is cool about it, but Shani Tarashaj really kicks off and there’s nothing I can do. I have to put him on the market. PSV come in with £3m and that’ll do. It’s a shame, but I run a strict no-dickheads rule here. I get an exemption as I’m the boss.

We recommence our Premier League campaign (one win from three so far) away at Leicester. They’ll be without Jamie Vardy, so that’s good news, but we’ll be without Kevin Mirallas, who has supplied so many key passes from the right. Aaron Lennon comes in for him, but I’m a little disconcerted that the ‘good atmosphere disappears immediately’ when I walk into the dressing room. It’s a bit early in the game for that. Usually, there’s three or four months of tolerance before I lose them. Still, you can achieve a lot these days with just one good result. 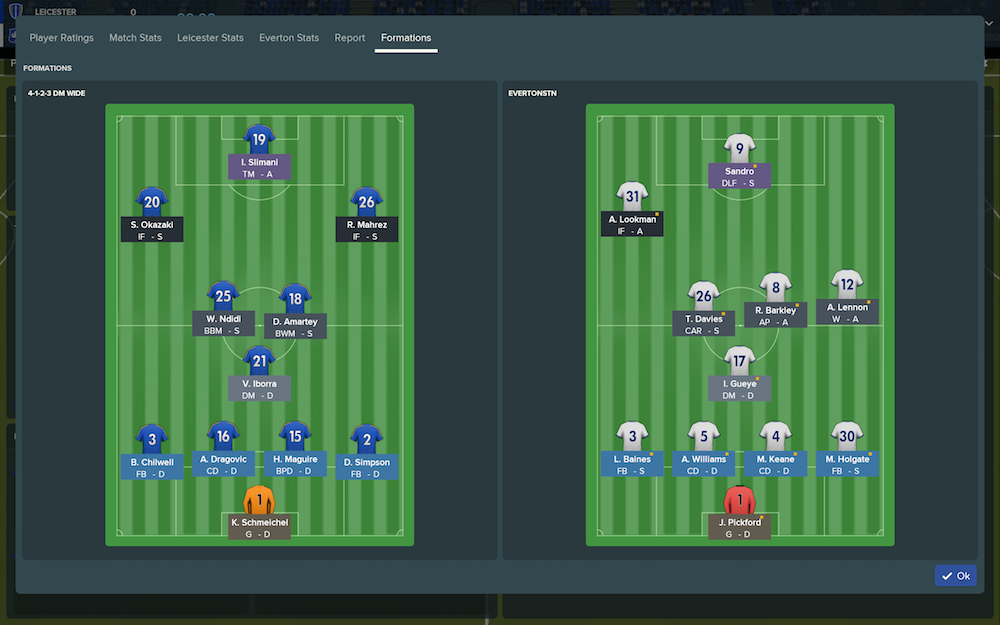 It doesn’t take long for me to spot my first major error. Pushing the left midfielder, young Lookman in this case, up so high brings certain benefits, but if the opposition has a particularly gifted right midfielder, you do ask rather a lot of your full-back. Leicester’s right midfielder is Riyad Mahrez. After watching three consecutive Leicester attacks down that flank, I sheepishly drop Lookman back and we all agree to say no more about it. Chances are few and far between after that, our best moment coming when Ross Barkley lofts a ball over the Foxes’ defence and Sandro dutifully smashes it into the side netting. We’ve created very little though, Lennon has offered nothing and we don’t have much strength in depth on those flanks. I decide to test them in the middle and switch to a diamond.

It doesn’t take long for me to spot my second major error. While it’s nice to have two strikers and a man tucked in behind, it does leave both of our full-backs hopelessly exposed. Leicester overwhelm us and make three big chances while I’m desperately trying to repair the damage. I won’t be doing that again. Back to 4-1-4-1 we go, with Lookman as an uncomfortable left winger. We don’t make any chances, but neither do Leicester and with time running down, I reconcile myself to the virtues of a point away from home.

And then Ashley Williams lumps the ball out of defence and finds Sandro. The Spaniard has a lot of work to do, but he holds it up nicely and then slips it across to Sigurdsson. Tom Davies, bless him, has been sprinting all the way from the edge of our box and he doesn’t let up for a moment. He powers into the box, Sigurdsson rolls the ball into his path and the youngster’s finish is true. It’s our first shot on target and I have absolutely no shame in shutting the game down with every defensive tactic I know. One point away from home is good, but three undeserved ones are far better. 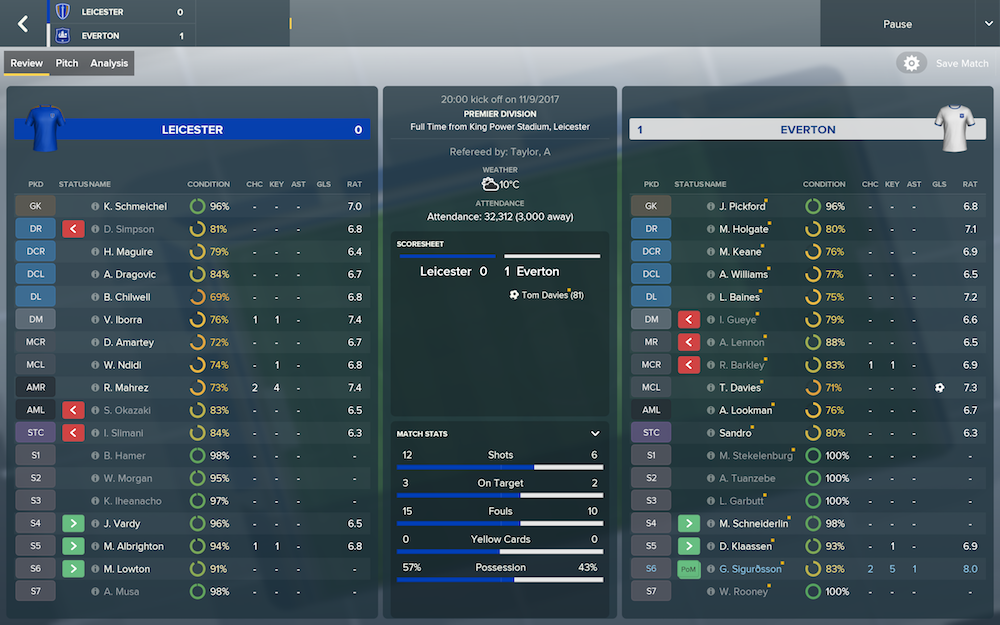 Those of you who have followed this sort of drivel since the first days of Bobby Manager will know my feelings towards the Europa League. It’s a bloated nut sack of a competition hopelessly compromised by the sudden influx of Champions League also-rans in the second stage, almost as if all of European football has been structured for the benefit of just a few elite clubs.

As delighted as I would be with any kind of silverware, or indeed any wins, I’m ranking the visit of Hoffenheim some way beneath the visit of Crystal Palace in my list of things to worry about. I want my players fresh for the league, and it would also be nice to give a chance to a few people who haven’t had much game time. So we’ve got eleven changes for this game. 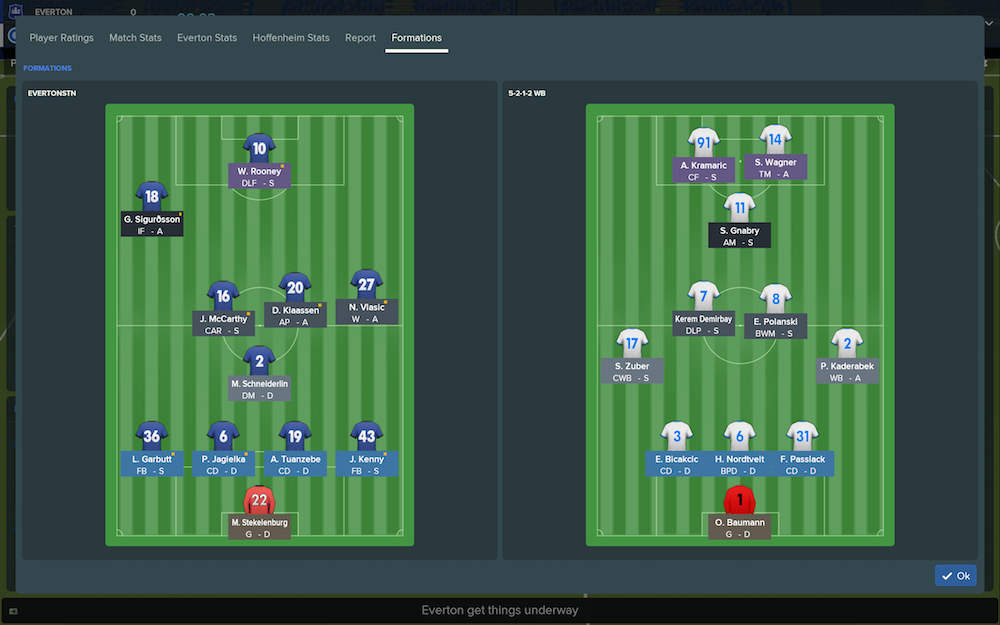 It’s an even game right up until the moment that Luke Garbutt’s idiotic back pass allows Kramaric to open the scoring. I’m so disappointed in Garbutt, and this isn’t his only error of the game. He looks a decent player and I’d given him six months to impress me. One game later and I’ll be setting the scouts to prepare me a shortlist of left-backs for January. He’s not the only one though, everyone is crap. I shift to our attacking 4-4-2 and bring Oumar Niasse on for Morgan Schneiderlin to try to take the game to them.

We start to make chances, including one that Vlasic should be reviewing over and over again in his bed at 4am while sweating and shaking. After an hour, suitably impressed, I withdraw Sigurdsson to keep him fresh for the weekend. I want him on that left flank. I also wash my hands of Garbutt, whose performance is reaching new levels of incompetence. I didn’t want to use Baines, but he’s given me no choice. Shortly after that double change, Rooney chips in a free kick and Axel Tuanzebe, of all people, lashes it home.

We have chances to win the game, both of which are horribly spurned, but a draw from a reserve side against a team like Hoffenheim isn’t to be sniffed at. We’ve learned a lot here. 1) Do not trust Luke Garbutt; 2) A broom stabbed into the ground wearing an Everton shirt would be a better target man than Oumar Niasse; 3) Wayne Rooney may not be entirely without merit. I’ll take that. 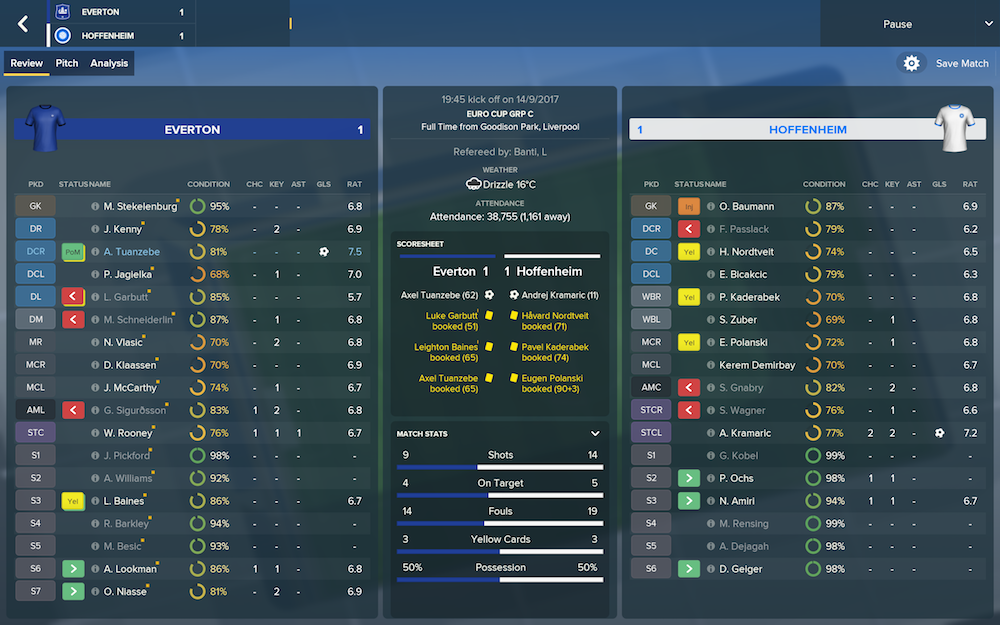 The problem with sacking off a midweek game like that is that if you don’t win the fixture you saved your first-teamers for, you look really silly. It’s Crystal Palace, they’ve had a really good start to the season but, and I do think we need to make this point robustly, it’s Crystal Palace.

Gylfi Sigurdsson’s efforts recently have seen him usurp Ademola Lookman on the left, but with the exception of Aaron Lennon, continuing to deputise for the wildly superior Kevin Mirallas, this is pretty much a full strength team. So I have expectations. 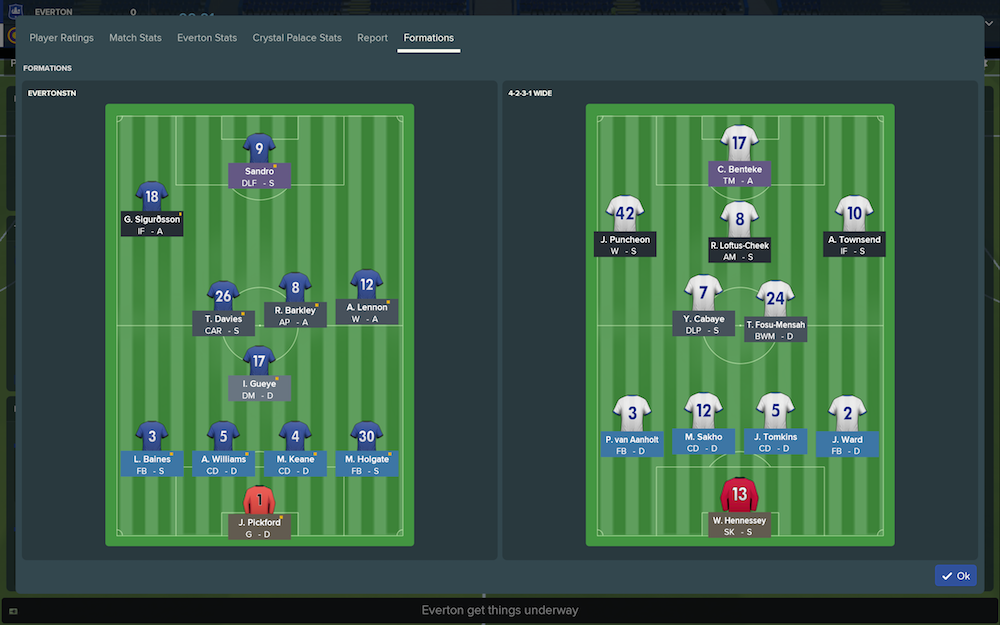 For the first time, I feel frustration at points lost as opposed to relief at points saved. We should have been two goals to the good before the clock had reached double figures. Sigurdsson skied one from close range and Baines brought a world class save from Wayne Hennessy, which is the kind of thing you don’t expect to have to type.

Palace caused a few problems, but were largely reduced to long shots from range. That’s encouraging, in that it means we can hold our own against the form team in the league – as you’d call Palace if you work in PR – or against a team expected to finish in 14th, if you’re being honest. Don’t knock it. Achieving competence on your first go is no mean feat.

We dominated the second half as well, making and then wasting great chances to score, but it felt like a 0-0 draw from around about the hour mark. Still, let’s look on the bright side. We’re unbeaten in three, we’re unbeaten in Europe, we’ve evidently stumbled upon a shape and game plan that isn’t perfect, but isn’t hopelessly flawed either. When the fourth goal went in against Bournemouth on the opening day of the season, I would have lunged for that like a drowning man reaching for driftwood. We might just make it to the transfer window. 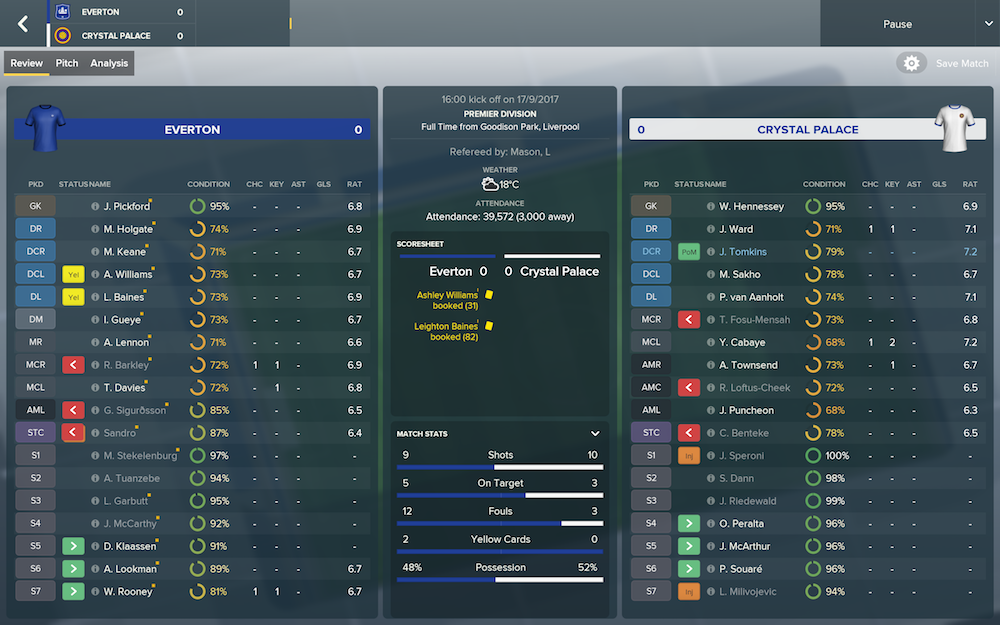 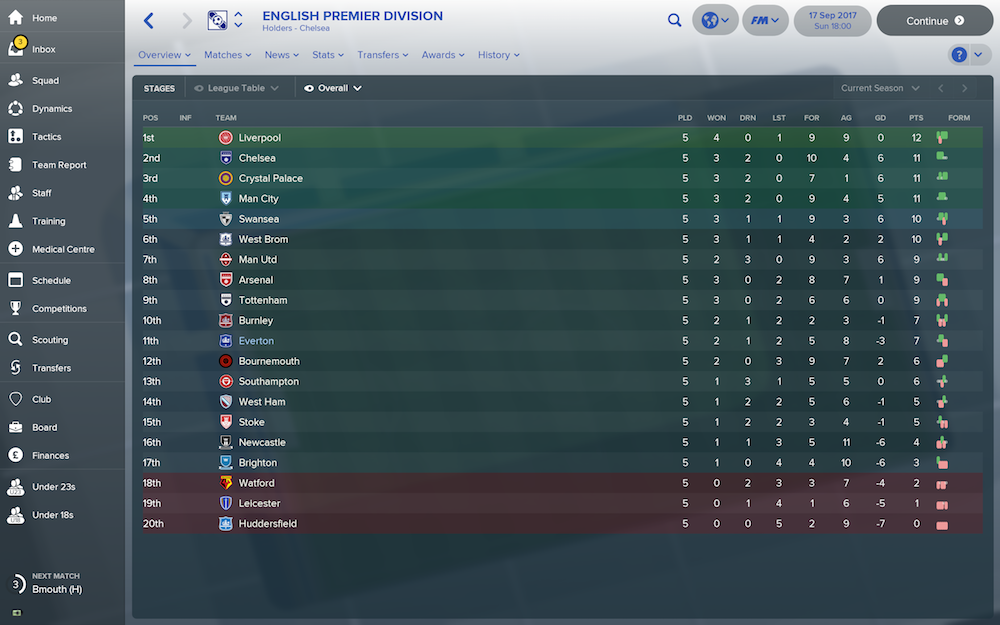