There’s no point tossing in near post corners at a load of big lads. We’ll use my special short corner routine that drags all the markers into the six-yard box and leaves Sandro lurking on the edge of the box for the cut-back. 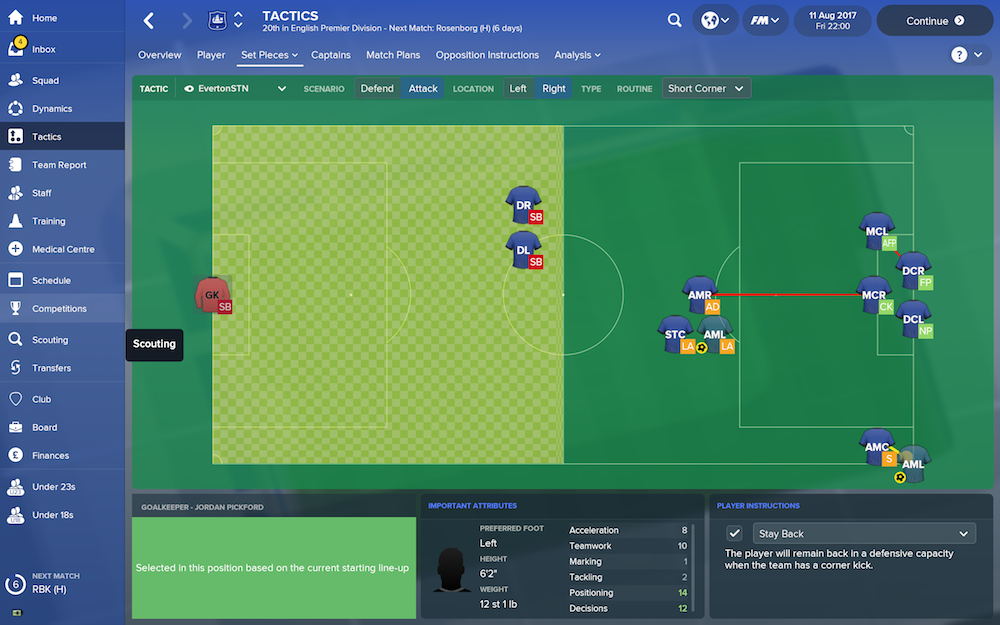 Leighton Baines and Wayne Rooney still lack a bit of sharpness after their injuries, so they’ll sit this one out. Davy Klaassen and Luke Garbutt can play. I’ve been impressed with Axel Tuanzebe in pre-season, so he can line up with Michael Keane. We’ll play the standard formation which is to step up and dominate possession. Gylfi Sigurdsson will be ostensibly deployed to the left wing, but he’s going to drift in as another No.10 on the basis that we have millions of them and we’ve got to fit them in somehow.

But I’ve seen in pre-season that he usually drags a defender with him, freeing up room for the over-lapping left-back. Sandro has hit five in four this summer, so he’ll lead the line. I’m still weighing up what to do with the £20m transfer budget. I think it’s safe to say that we’re okay for midfielders. But we do need a striker, a left-back or a quick winger. I may leave this decision until late on. 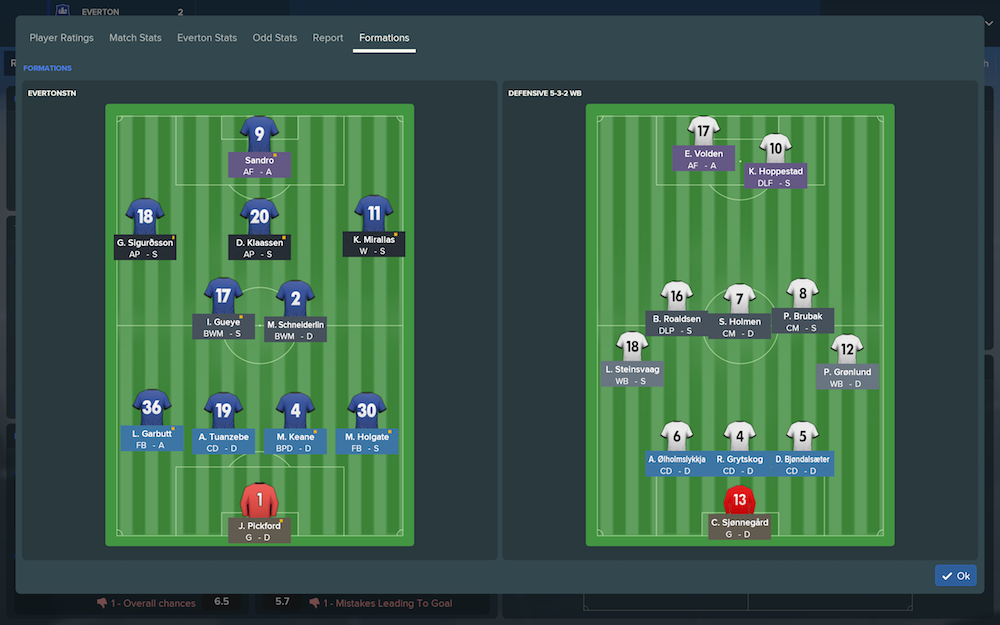 I’m really not sure how this only ends 2-0. We take the lead after 90 seconds when we push forward from the kick-off and essentially colonise Odd’s penalty area. We have eight men in or around the penalty area when Sigurdsson lays it off to Idrissa Gueye and he wellies it home with extreme prejudice. We should double the lead long before Sigurdsson converts a spot-kick just before half time. We seem intent on playing some kind of near-miss bingo, ticking off far post, near post, cross bar, super save, reaction save, cleared off the line, missed by a bit, missed by miles and the all important, sweet jesus, Davy, was that actually a shot?

Still two goals to the good on the hour, I bring in Rooney and Baines, but it doesn’t make much difference. Odd are playing a tight back three with defensive full-backs, protected by a deep-lying midfield three. Getting through them is like getting through a brick wall with a knife and fork. But, with the exception of a couple of breakaways that come to nothing, they present no serious threat and we take the win. It’s not quite enough for me to play a reserve team in Norway, but I can at least be a little conservative. 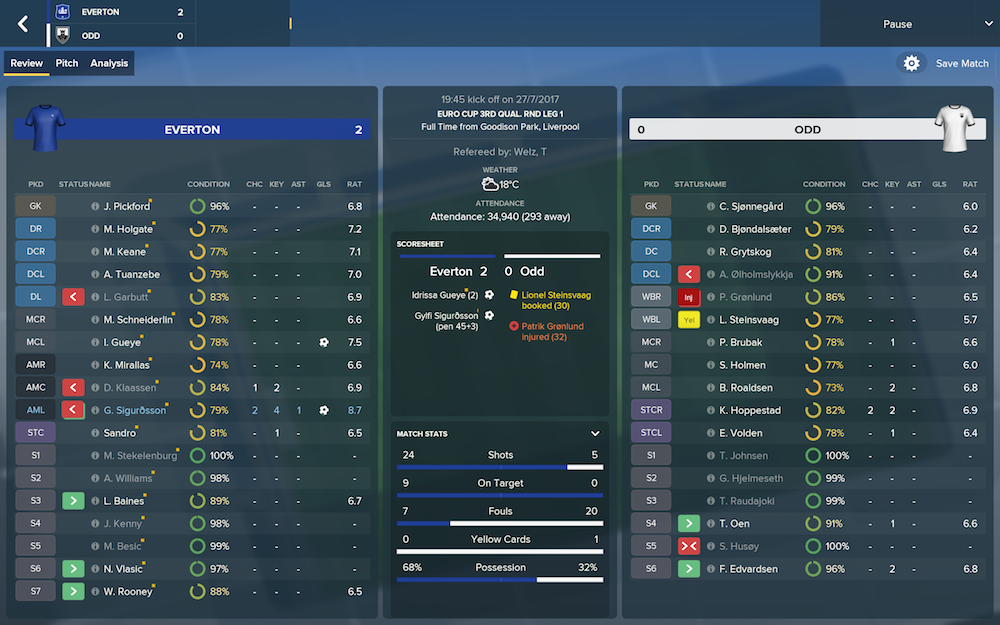 For the second leg, and with one eye on the approaching clash with Bournemouth, I return Baines and Rooney to complete what appears to be my first choice line-up, injuries notwithstanding. Baines and Holgate provide width from full-back and they have instructions to overlap. Michael Keane and Axel Tuanzebe are both good young defenders with a bit of pace to get them out of trouble. Morgan Schneiderlin and Idrissa Gueye should serve as a formidable base to the midfield, and Gueye has the licence to get further up the pitch. Gylfi Sigurdsson will cut in from the left and dovetail, hopefully, with Rooney while Kevin Mirallas gets out wide to provide crosses. And then there’s Sandro buzzing away up top. We push up, we dominate, we win. I hope. 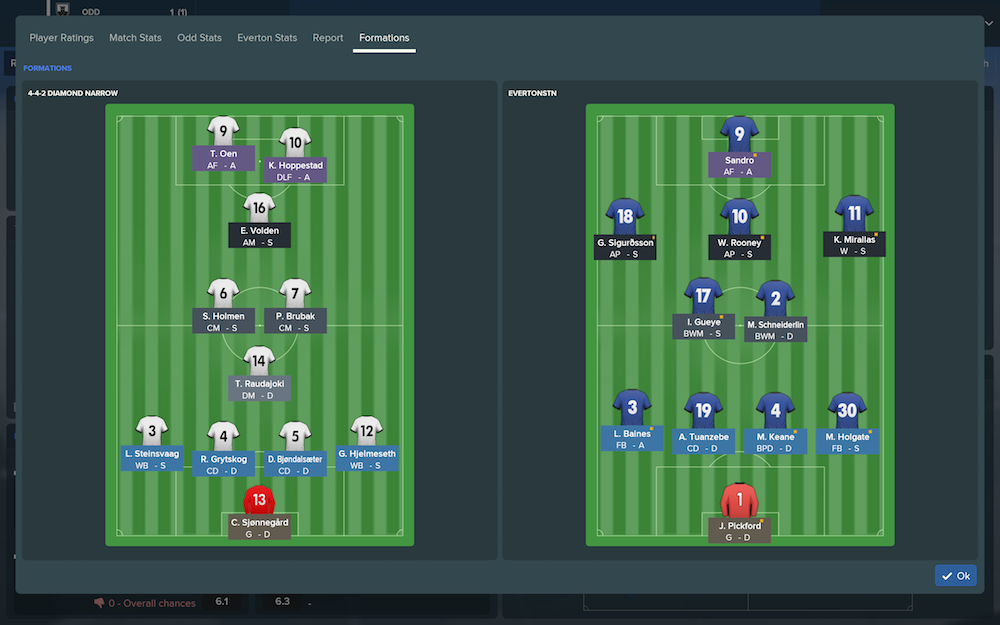 It’s another win, another comfortable game and another lingering sense that this should have been more convincing. It would have been more convincing if Rooney hadn’t fluffed a penalty in the early stages. We created scores of chances, but it wasn’t until the 50th minute when Sandro finally converted, finishing off a 329 pass move that seemed to go on for fully five minutes.

Annoyingly, Odd hit back when they went long, got behind our advanced defenders and slipped the ball past Pickford, but Sigurdsson put us back in front shortly afterwards, so no harm done. Mission accomplished. And yet I’m not exactly vibrating with confidence ahead of Bournemouth. 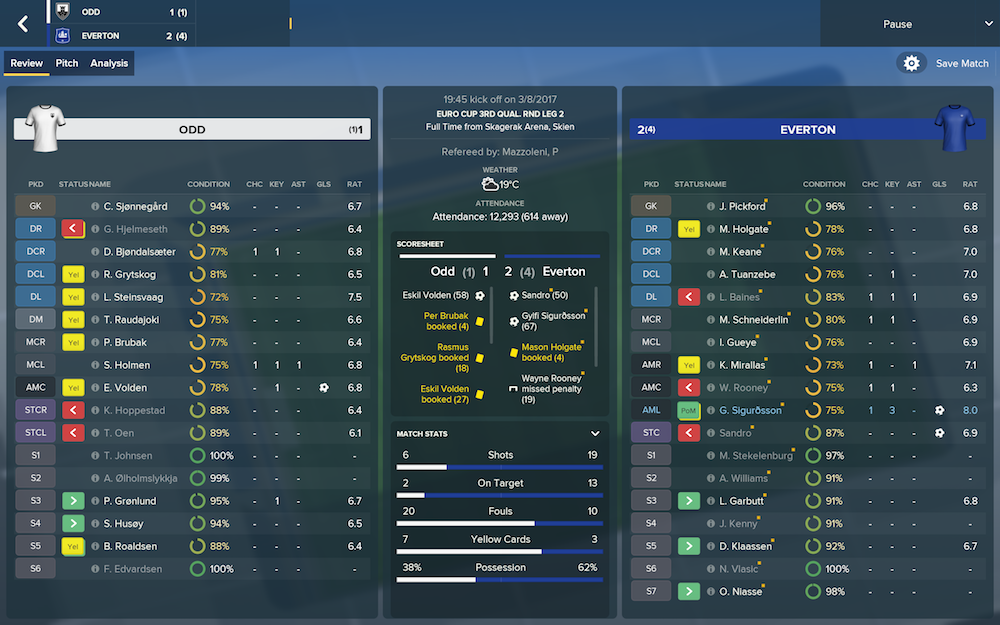 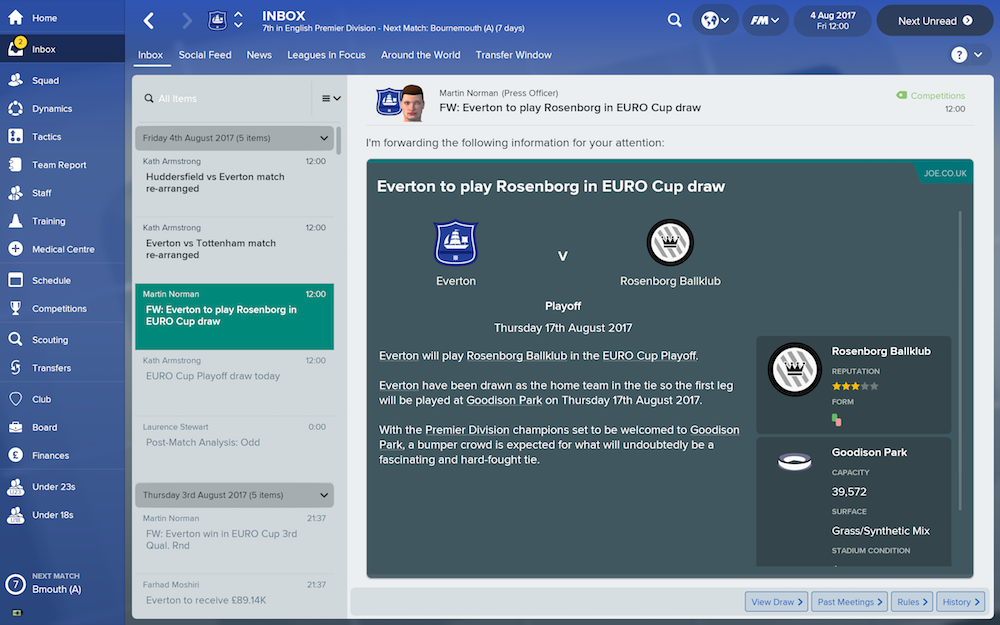 I’ve had problems with Bournemouth in the past, you know. It’s Benik Afobe and Jermain Defoe. They’re both really quick and really clever. All the Cherries have to do is lob the ball over the top and we’ve got two incoming problems. I’ll need to drop the defensive line deep to guard against that.

This, of course, negates the whole idea of pushing up and dominating possession in their half. A back three would probably be the best idea here, but I haven’t prepared one and I don’t think a week is really enough time to do so. But we’ve shown in pre-season and against Odd that, at the very least, we’ll dominate possession, pass the ball calmly and make plenty of opportunities. I’m over-thinking this. Let’s just get on with it. 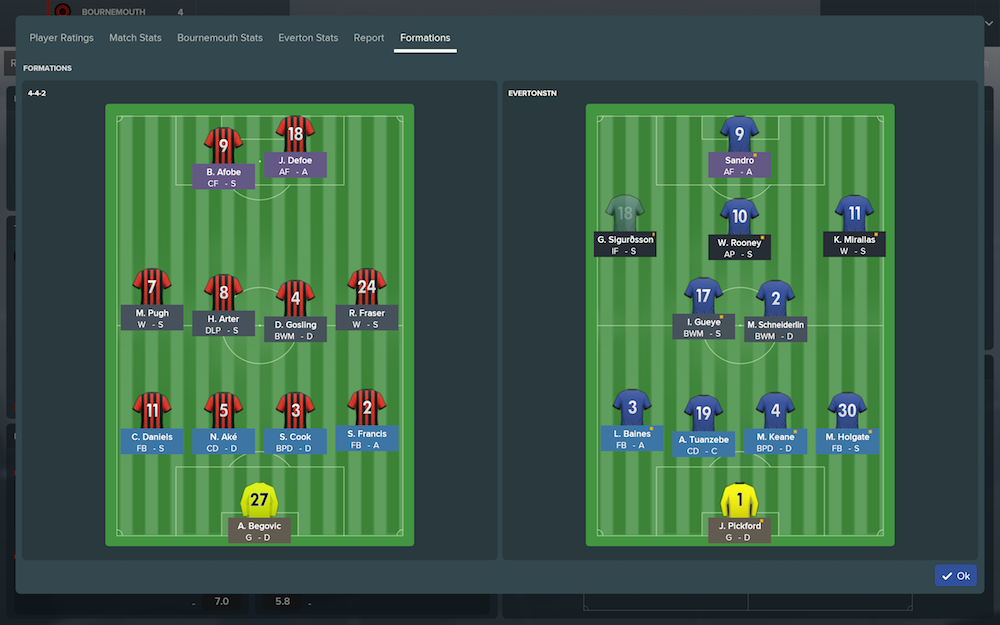 It’s some time after the final whistle before I can move. As you, dear reader, know well, I’ve had my low points in this game. But I can’t recall a slap around the face quite like this. In almost every department, we matched Bournemouth. Possession? Split down the middle. Chances? We made loads, they made loads. It was 0-0 at half time. It fucking wasn’t by the end.

Afobe and Defoe looked like Ronaldo and Messi. As soon as Bournemouth were able to get the ball to one of them, they tore us apart. They had six clear cut chances, four half chances, they hit the post twice and they missed a penalty. It didn’t matter what I did, I couldn’t stop them. I tried dropping deeper, I tried adding a defensive midfielder, I tried reverting to the counter-attack, nothing seemed to work. For every punch we swung, they landed two. The goals came thick and fast. One, two, three. We responded with a freakish goal from Oumar Niasse, but then they came back with a fourth. And then they missed a penalty too. 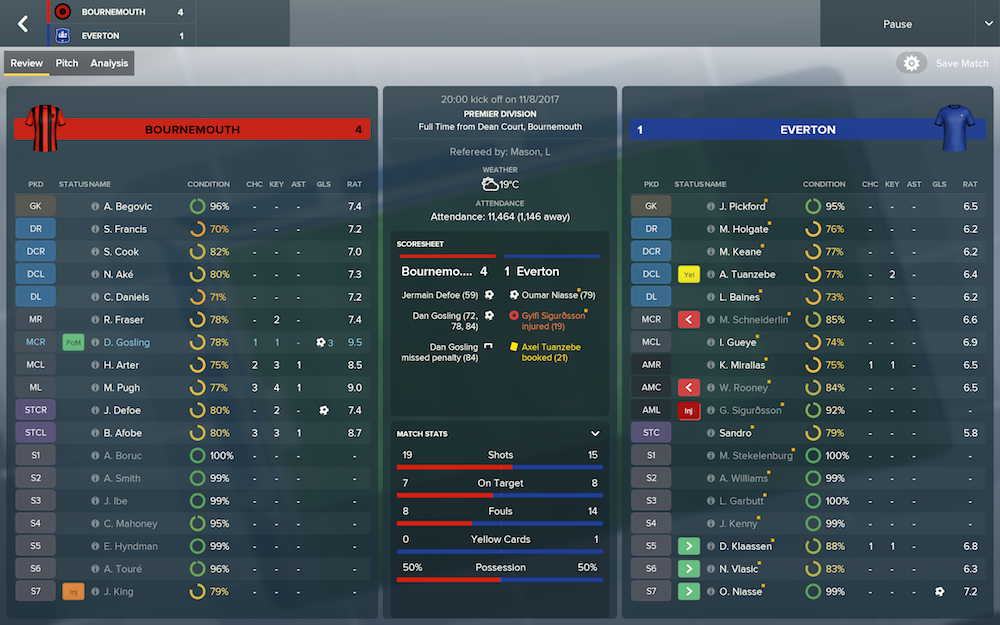