I really thought that Matt Stanger was better than this. Not much better, admittedly. But I never thought he was so cruel that he’d inflict Everton on me all over again.

I thought we could try something different this year, perhaps something a little more joyful like Real Madrid or Barcelona. But this is clearly not how Matt’s mind works. Matt’s mind is apparently like medieval machinery; innovation driven solely by the desire to inflict pain. It clanks and grinds in the shadows as the innocent beg for death.

I’ve learned from last year. When I spoke to Oliver Collyer, original creator of Football Manager, about my FM17 failure, he commended me for my courage, but told me I was foolish to go in with a low reputation and no transfer window. Fair point. So I’ve rectified that. I’m now a fully qualified coach who used to play at a international (continental) level and likes to focus on youth development. For whatever that’s worth with my track record of early sackings. It means that most of the players are prepared to give me a chance. Only three oppose me, and it breaks my heart that one of them is Idrissa Gueye. I had high hopes for us

But while this squad is still horribly unbalanced, packed with No.10s and sorely lacking in strikers and width, it’s not quite as bad as it looks in real life. While we only have seven players with 15+ pace, only three outfield players are under 12, so we’re not painfully slow. And Sandro, far from being a misfit, actually looks quite good here. I probably won’t be able to use the lightning counter-attack 4-1-4-1 formation that I developed for my Arsenal and Celtic sides, but given that I’d feared we’d be playing walking football here, I’m actually quite relieved.

My biggest concern is that, and I’ll admit this does sound a little dramatic, I have no idea what I’m doing. I only played a handful of games on the Beta, most of which were with St Albans. The basics of the match engine don’t tend to change dramatically from edition to edition (though the jump in difficulty from FM14 to FM15 nearly broke me), but I’ve never yet found that I can slip from one iteration to the other without ripping up everything I thought I knew and starting again. This is a problem, you see, because this is the only game, the only save, of Football Manager I’ll be playing. I won’t be doing my own private game this year. So I have to learn on the job.

And so it begins. pic.twitter.com/WzL1foHJ0M

I’ll spare you the details of my first morning at Finch Farm. It is enough to say that there is not one department of this football club that hasn’t had my full attention across four real hours of graft. We have short term searches on for a left-back and a striker, but I do want to see how the players do in pre-season before I go crazy with our modest £20m war chest. That’s only enough for one proven player, or two hopeful punts. And yes, that will probably prove to be rhyming slang.

We appoint four new coaches to fill the gaps and, while we could be better served on the training field, it’s all we’re allowed for now, so it will have to do. In keeping with my desire to give everyone a chance, none of the players are placed on either the transfer list or the loan list. I didn’t want to take the risk of putting two or three up for sale and crashing morale before we’ve even started. Every one of the 56 players on our books has been reviewed and a note has been made of their ability and potential. And then a three-speed tactical plan has been laid down.

As I’ve said, it would be foolish to try to play that break-neck counter-attacking 4-1-4-1 without any seriously quick players. What we do have, however, is an excess of technically gifted, intelligent attacking midfielders. With that in mind, I’ve gone 4-2-3-1 and urged them to play possession football, to express themselves, to move with freedom, to dominate possession and work the ball into the box. We’ll put the old maxim about the first yard being in your head to the test. To ensure that we can react to changing circumstances, there are two other shapes, both very similar, but one that is more attacking and one that’s far more defensive. We’ll work as hard as possible to familiarise ourselves with these shapes as pre-season unfolds.

I need every edge I can get here and so I’ve painstakingly designed multiple set-piece options for the season to come. I’ll be physically scouting future opponents, noting down their set pieces and then adapting to exploit any weak spots. But not in pre-season. Pre-season is for finding a shape, finding a groove and ensuring that no-one breaks their leg. 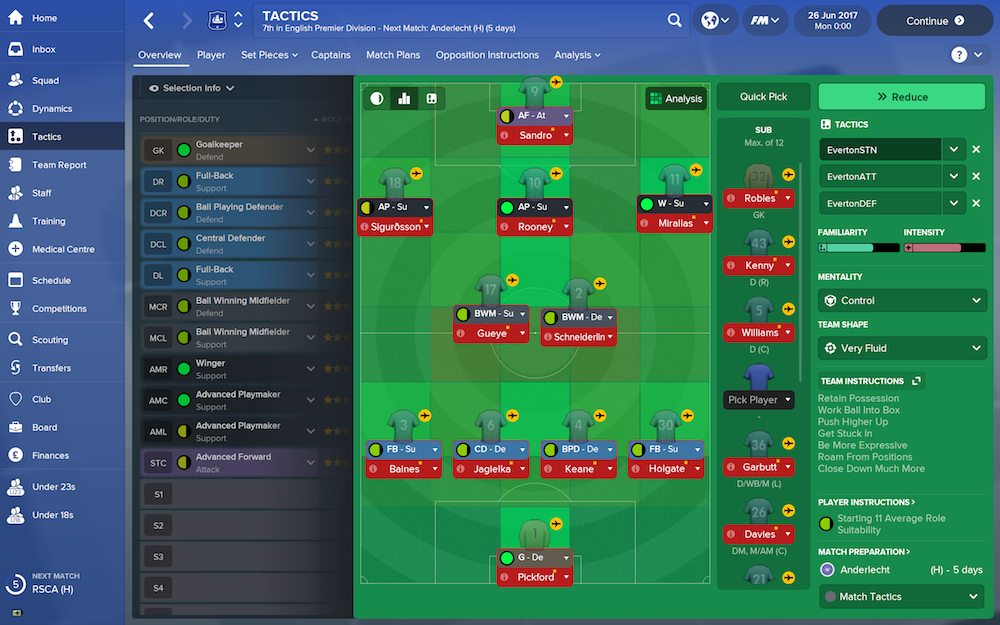 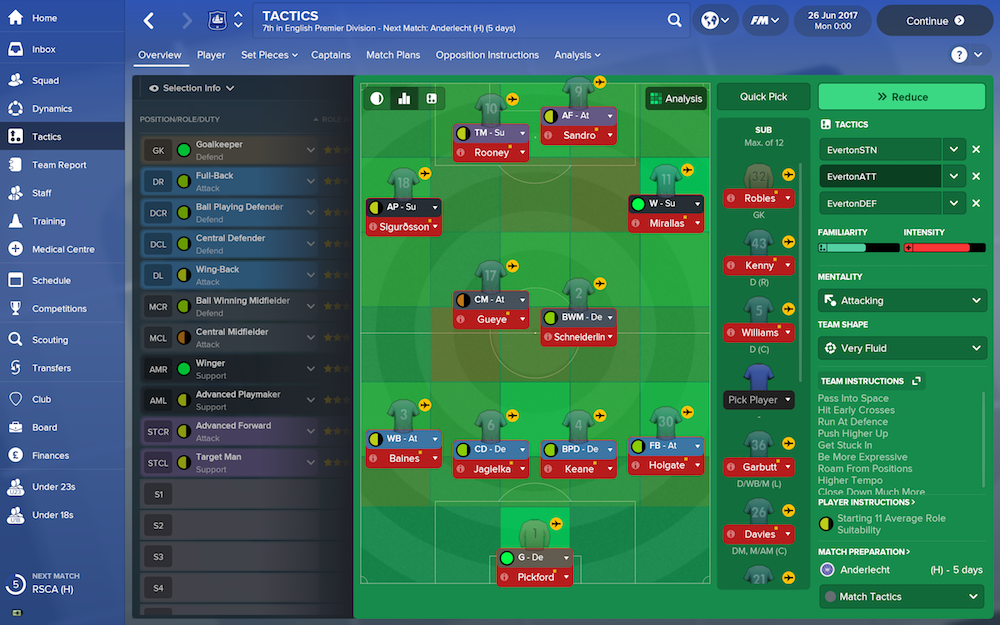 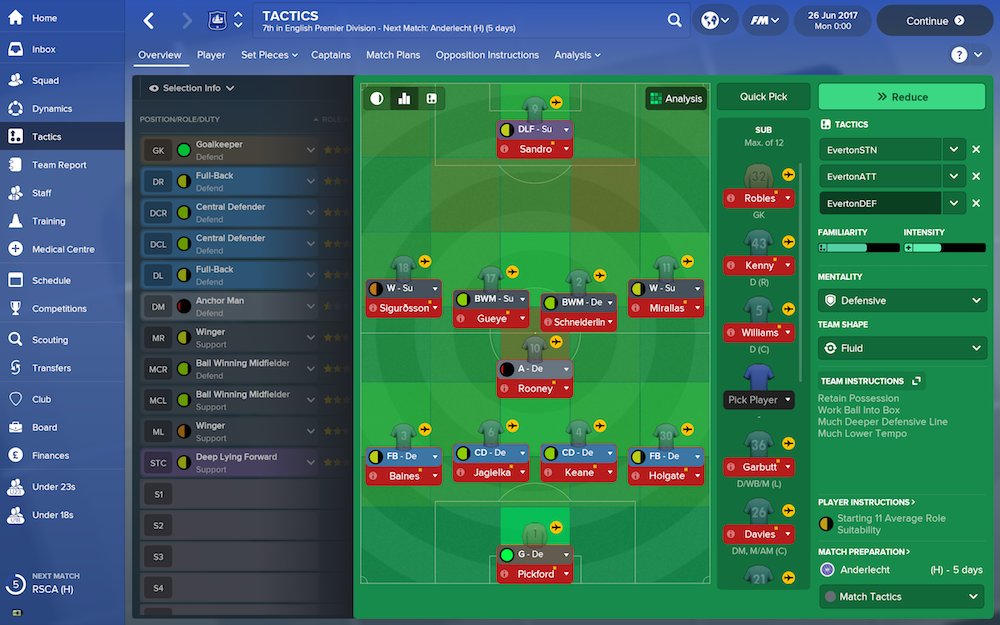 It’s time to meet the players and I want to make a good impression and get the big characters on my side from the start. Deep down, I fear humiliation once again, but in front of the lads I have to act differently. I have to sell them a dream. I have to whisk them up on my magic carpet and show them my whole new world, a world of passing football and unprecedented success. And so I tell them that I think we can get into the Europa League places if we play our cards right and it works a treat. All the big characters agree. It’s just a shame that everyone else thinks I’m asking far too much. Eager not to lose face in front of Rooney and his clique of weary 30-somethings, I double down on my expectations. Morale crashes. I hate this fucking football club. 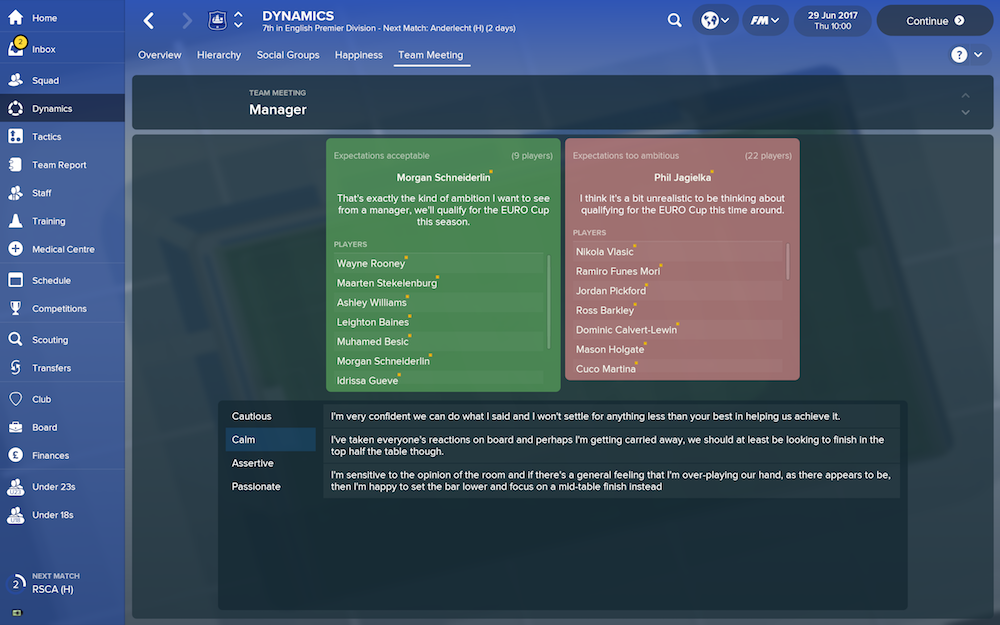 Our first game is a dull affair, mostly because Anderlecht defend deep and in numbers and, while we dominate possession, we spend the afternoon carefully trying to work the ball into the box. I change the entire team at half time, it’s probably not the last time I’ll want to do that, and Aaron Lennon scores what proves to be the winning goal. 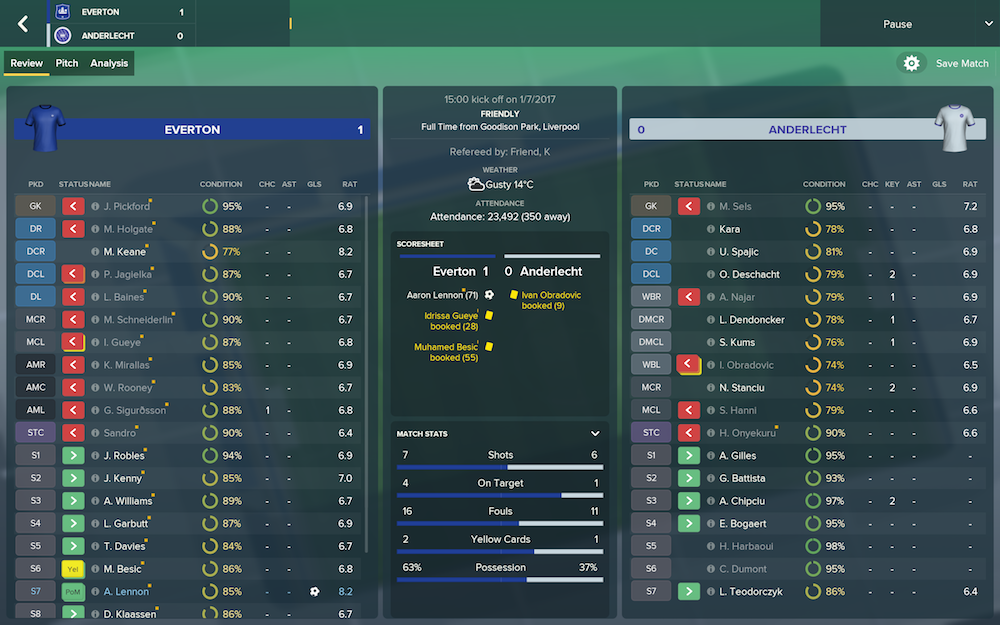 I’m willing to let Dominic Calvert-Lewin go out on loan because I just can’t cope with the possibility that I might be basing my reputation and my self-esteem on a young man whose key technically attributes are generally about 12 or so. I’m also happy to let Jose Robles go to Valencia for £4.4m. We’ve still got Marten Stekelenberg. To address the lack of depth at centre-back, and thanks to whoever it was who sent three perfectly acceptable young defenders out on non-recallable loans, I’ve got Axel Tuanzebe in for the season from Manchester United. He’s young, quick and eager and he’ll do well here. 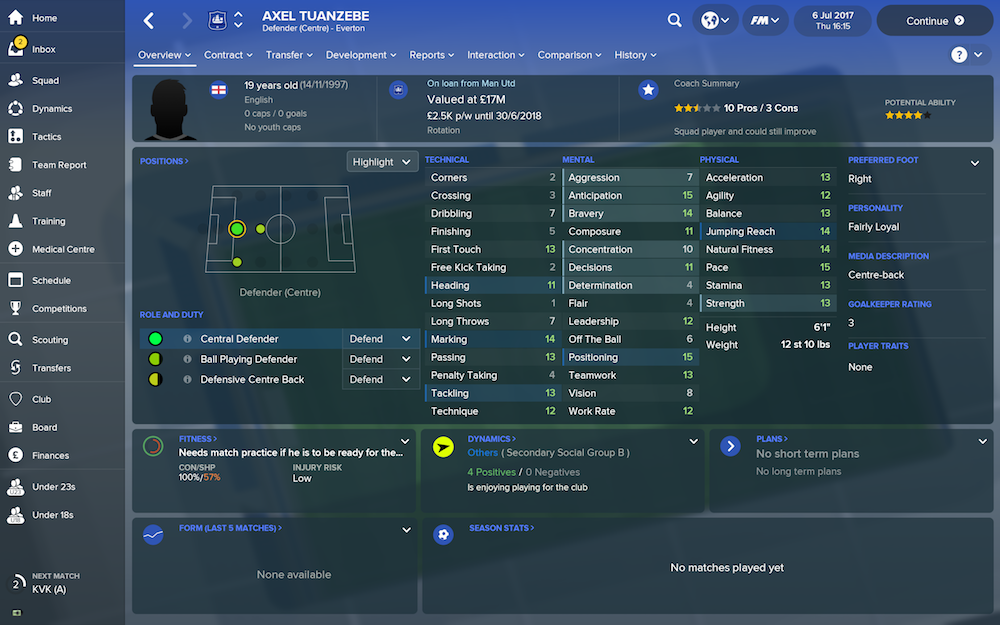 With Kortrijk happy to actually come out and play football, this is a far more interesting affair. In fact, when one of their defenders turns around and inexplicably blasts the ball past his own goalkeeper, it’s very interesting indeed. We add another shortly afterwards, swap almost the whole team at the break and enjoy a degree of comfort throughout. Slowly, we’re getting fit and familiar. 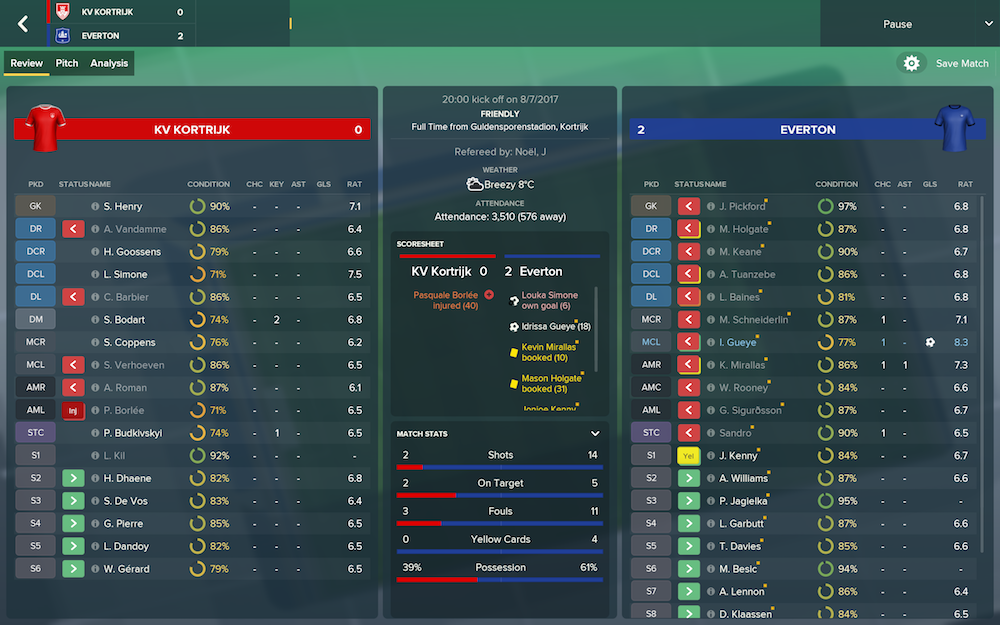 A slight tactical shift here. I’ve noticed that Sigurdsson drifts into very central positions, sometimes taking people with him, and it seems a shame not to make something of that. I switch off ‘work the ball into the box’ and with Leighton Baines carrying a knock, I offer a Luke Garbutt a chance to make an impression. And he does exactly that, rampaging up and down the flank in a glorious first half. Sandro looks great too, indeed everyone looks great. It’s just a shame that we completely switch off at the break and let Scunthorpe run the show. Why won’t they let me be happy. 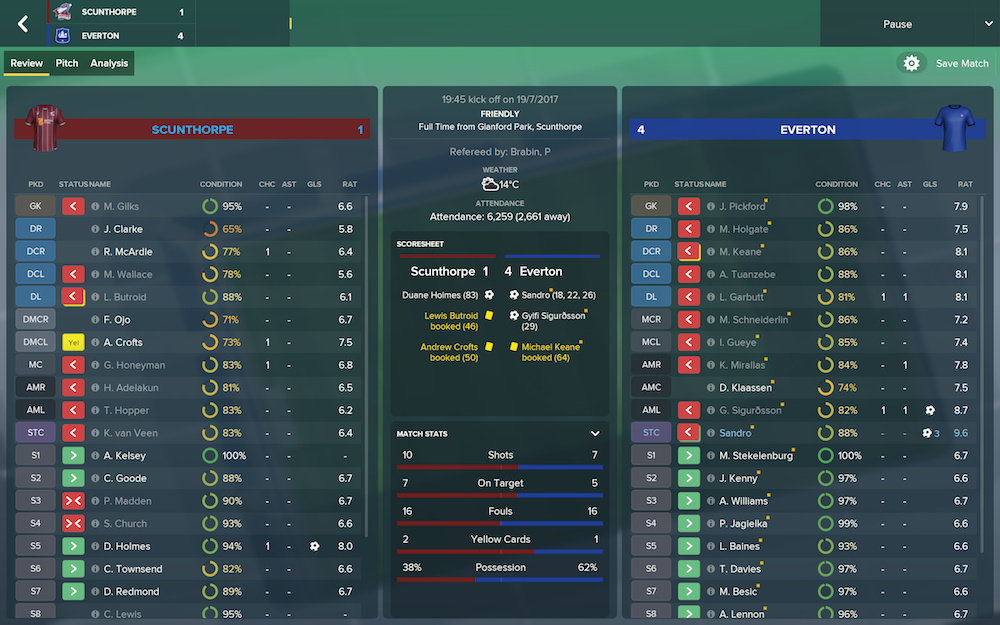 Another good showing ahead of the Europa League games. We can’t get too excited obviously, but it’s nice to see the development in the team. Some annoying little injuries have stopped us from getting everyone to the level of fitness that I’d expect, but we can work on that as we go. And Sandro is really enjoying his advanced forward role. Four games, four wins and just the one goal conceded. If you could read anything into pre-season friendlies, I’d be happy with that. 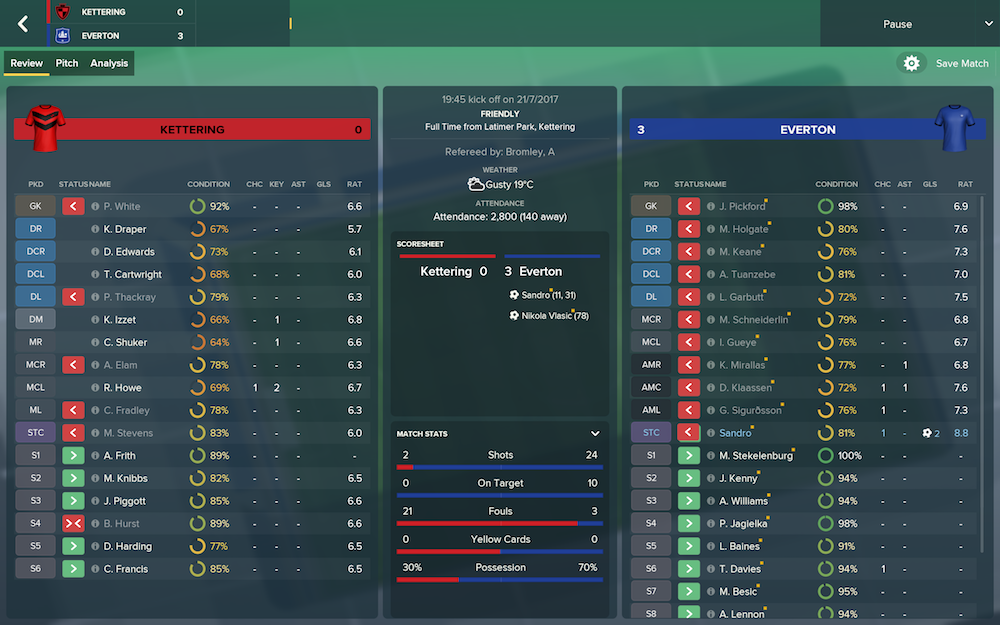 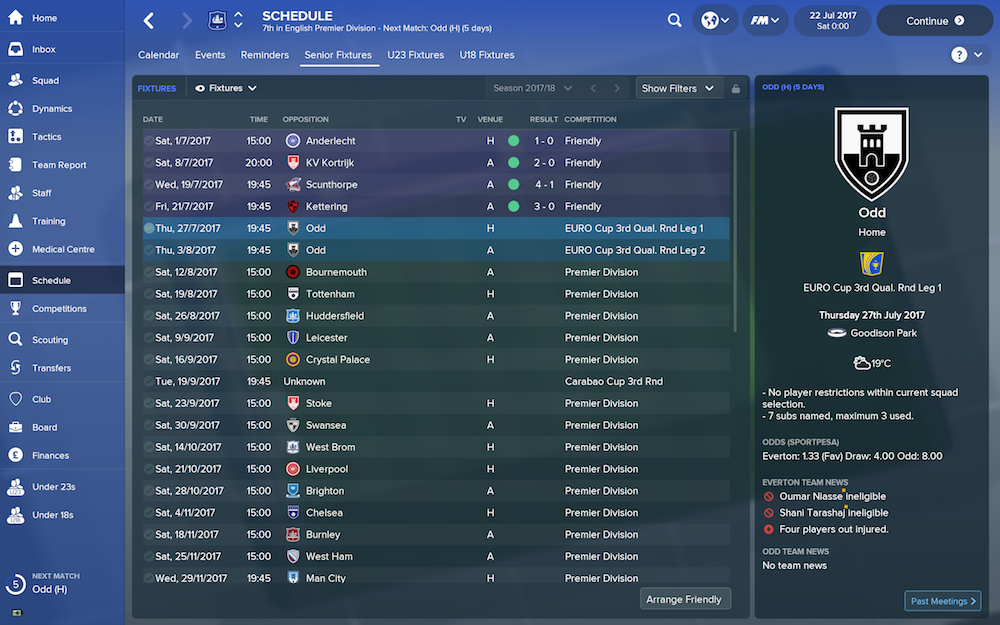 And so the new season looms up ahead of us like a tidal wave of misery and emotional anguish. At least we’ll have the benefit of an easier start against Norwegian outfit Odd in the Europa League. But, in my experience, Everton don’t do easy starts. They just do early disasters. 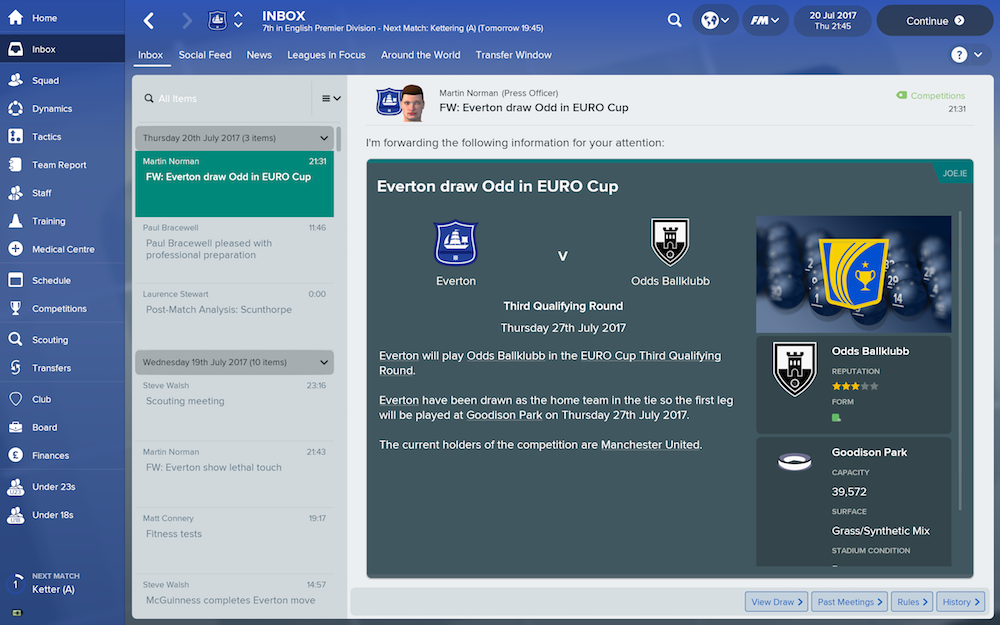