Oh God. This is all very reminiscent of my time at Celtic. I had a good first pre-season up there, I felt really confident in the three tactical plans I’d painstakingly put together. And then I got gubbed 1-4 by Kilmarnock. At home. But…and this is the important bit, I won the treble that season. And privately, with Alex Stewart and Matt Stanger broken on the wheel of Rangers, I went on to win the next three titles and reach the semi-finals of the Champions League. But, yeah…Scotland. It’s a bit harder in the Premier League.

I think it’s fair to say that the ‘push up and dominate’ plan was a bit of a disaster. We’re Everton. We’re in no position to dominate. So to avoid the indignity of giving it another go and going out of Europe, I’ve gone back to the drawing board. We’ll keep it nice and simple and tweak as we go, so it’s standard mentality and the only thing we’re really going to do is try to get it out left for Ademola Lookman, a rare source of acceleration in this team.

We’ll have Sandro dropping a little deeper to help out while Kevin Mirallas continues on the right to offer width and crosses. The biggest change is in the middle where Morgan Schneiderlin will drop back, Idrissa Gueye will shuttle in this new role that I can’t even say properly and we welcome Ross Barkley to the team in a role with all the attacking licence. Axel Tuanzebe drops out for Ashley Williams, but the rest of the defence stays the same. Gylfi Sigurdsson is injured and I’m pointedly leaving Wayne Rooney out. I expect an improvement. 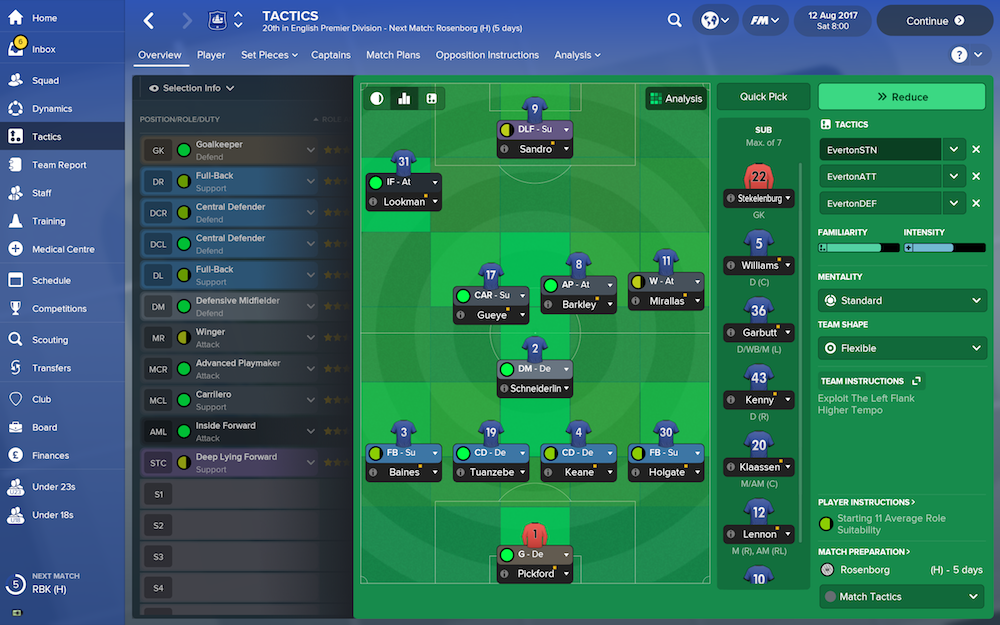 Right from the start, it looks better already and our early pressure delivers an early goal. Mirallas trots up the right, plays the ball in for Sandro and the finish is sweet. It’s an even sweeter finish for his second goal, again the product of a Mirallas cross, again lashed home with brutal accuracy.

We’re clicking so nicely, but I’m still cringing like a whipped dog every time Rosenberg get the ball. But it’s strange. When they do break, they don’t get very far. Williams and Keane have it all locked up, perhaps because the presence of Schneiderlin means that no-one gets pulled out of position. And as for young Lookman, he’s a sensation. He doesn’t score, but he’s all over the Norwegians like a rash.

Strictly speaking, the asymmetric formation and the instruction for one wide man to stay out and the other to cut in means that we’re absolutely *not* a balanced football team. But we feel like a balanced football team. So have we just suddenly got much better, or is it just that Rosenburg aren’t very good? Don’t give me an answer. I don’t know what I’d do with it anyway. 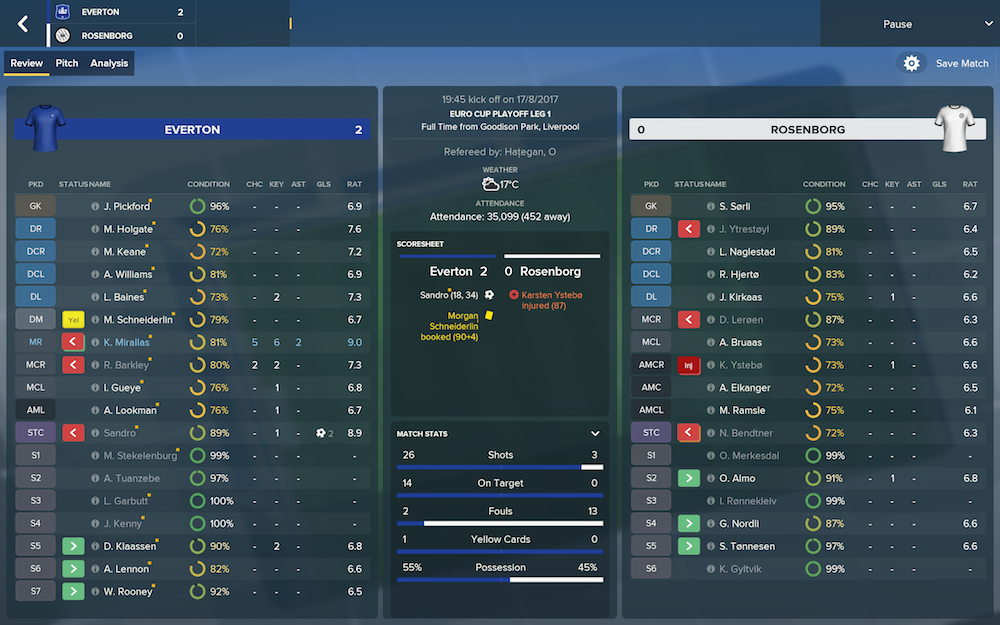 The reason everyone likes to start the season with a win is that you don’t have to go into the second game knowing that even an unfortunate defeat will signal a witch hunt. I could tell you that Howard Kendall’s first title winning Everton team lost their first two games, but you’d only laugh at me, wouldn’t you? The situation is quite simple. We have to get something off Tottenham at Goodison Park. And Tottenham are one of the best teams in the league. I think the wisest course of action here is to make as few changes as possible.

Tottenham lost their first game as well, at home to West Bromwich Albion while suffering injuries to Jan Vertonghen and Dele Alli. Danny Rose is out and Ben Davies has only just returned from injury, so it’s a no brainer to switch our focus from the left to the right. We’ll keep with those short corners as it minimises the risk of being caught on the break with too many many up front. There will be no changes to personnel. 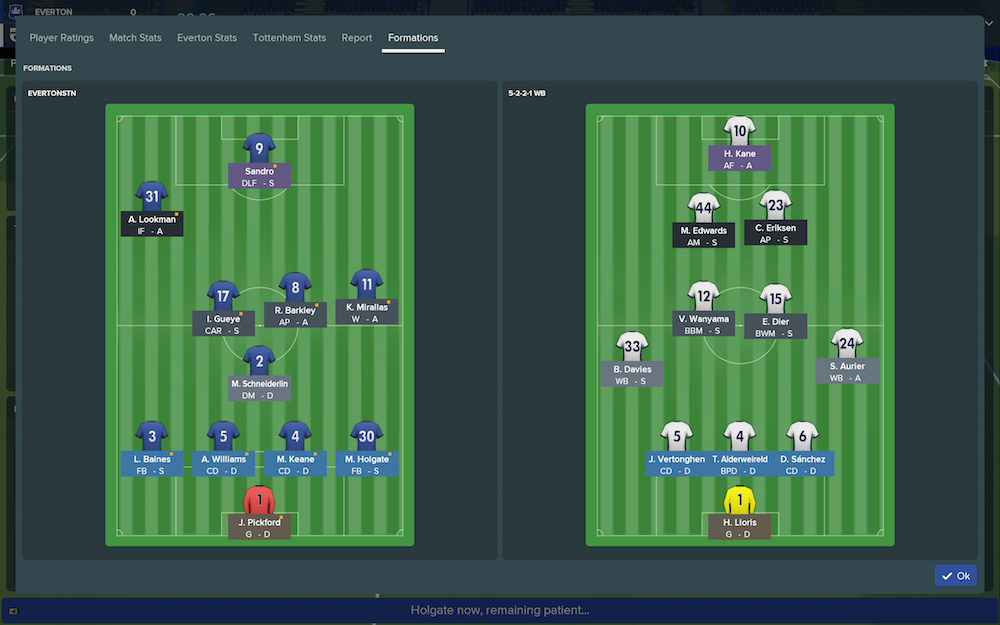 Right, stick with me on this. I thought we played really well. We could have taken the lead early on, but Ross Barkley hit the post and that wasn’t the last time we wobbled the woodwork either. For the most part, we held our ground well, we made lots of chances and I was pleased with the effort. But yes, I will accept that we lost the game and conceded another three goals in doing so. But wait until I tell you about the xG. I mean, I don’t know a lot about xG, but given the chances we made, I expected more gee than we actually received.

We were very close to another 0-0 at half-time, but we switched off at a throw-in and allowed Vertonghen, who sadly was quite operational, to ghost in and score. No matter. We replaced Barkley, who really isn’t fit, with Rooney and switched to attacking, to try to get back in the game before time ran out. Three good Everton chances duly followed before a free-kick from out deep was headed down by Harry Kane and dispatched by Davison Sanchez. Well, that really did screw the pooch.

With half an hour left, I had to gamble. I had to chase the game. I had to back my belief that this injury-ravaged Spurs side would tire. And you know what? They did tire. It’s just a shame that they scored a third through Kane before the fatigue set in. With 17 minutes to go, Ashley Williams scrambled one back for us, but it was, as Nate Dog once said, a tad bit late.

But I don’t want to panic about this. I don’t want to get too upset. We played well, we didn’t get the breaks, we got beat. But yeah, we’re in the relegation zone and we’ve conceded seven goals in two games, so I respect the fact that you’re howling with laughter. 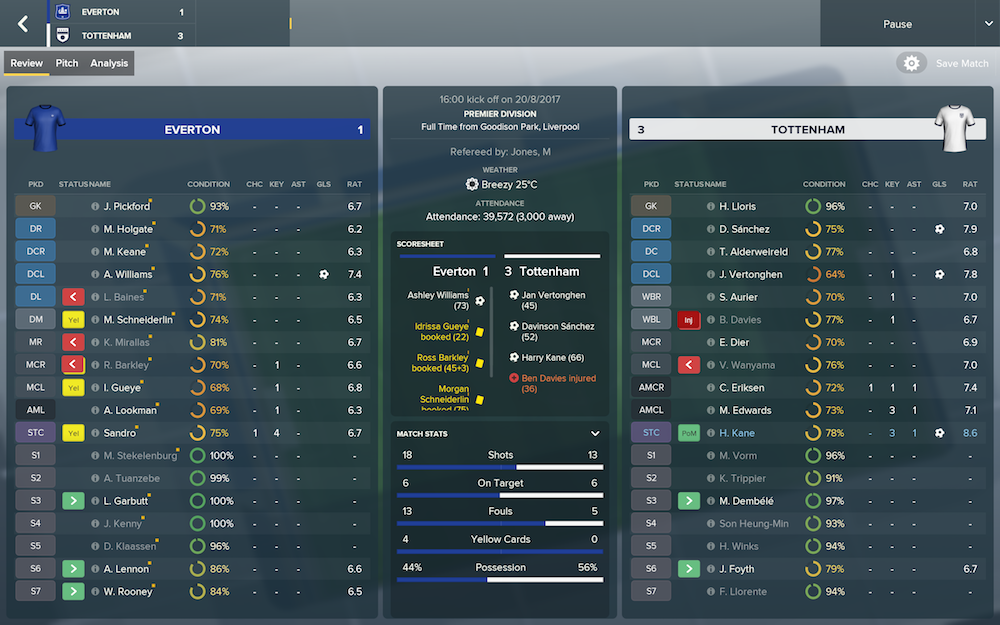 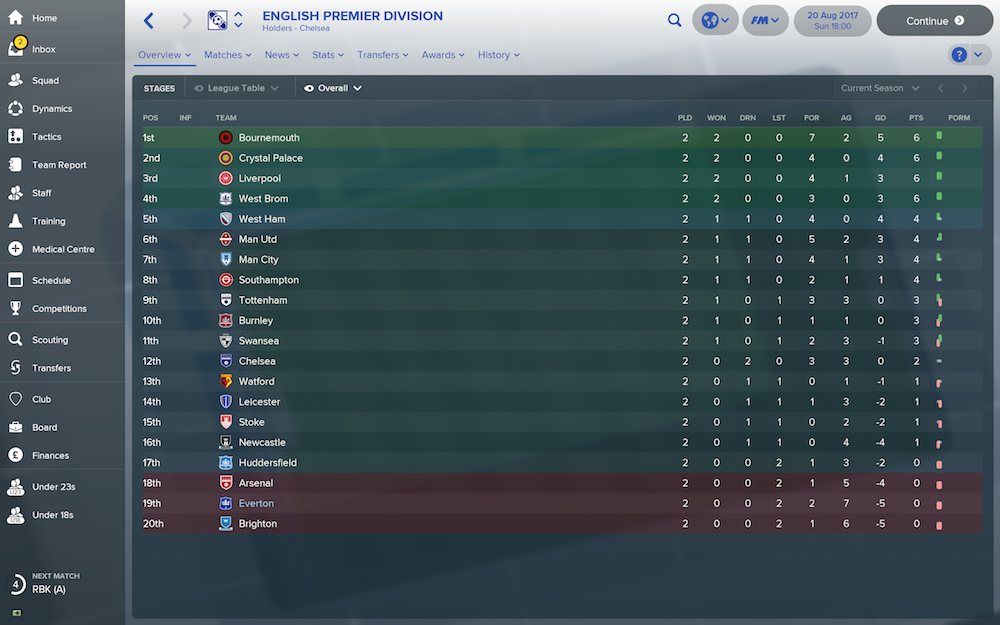