Everybody hates me. This is not unusual. Indeed, I’ve grown used to it since the summer. But generally, within the confines of Football Manager, it usually takes three months for the first signs of a dressing room revolt to appear. And yet here we are, still in August, just two games into a 38 game campaign and I’ve managed to alienate 14 players in the squad.

Apparently, the concession of seven goals in two games is considered a bad thing. If it were possible, I’d point them towards the real life Everton and ask them in which universe they’d prefer to dwell. 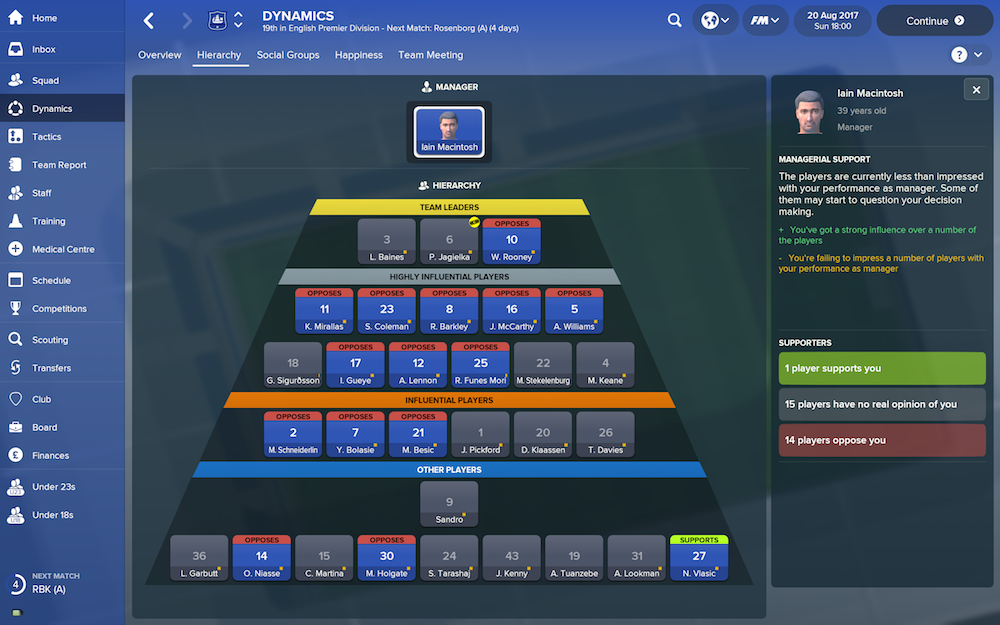 We have to push on. But I think that we have to push on in the same shape. There were positives about our weird, asymmetric formation against Spurs. Yes, they battered us, I accept that, but we had our moments. I think this formation gives us the right level of cover and allows us to field players with the right amount of pace. This is not a very balanced squad.

I really like Ademola Lookman, I like he way he always tries to do something with possession rather than slowly turning in a wide circle like a tugboat with a knackered rudder…like some attacking midfielders I could mention.

Wayne. He has to stay. Sandro is getting chances, so he stays. And that Cary Elwes player role, or whatever it is, that seems to allow Tom Davies to provide the cover to Lookman. It’s Rosenborg (got there in the end), we’ve taken a two goal lead to Norway from the first leg. Now let’s get ourselves into the group stages of this hideously bloated competition that no-one likes. 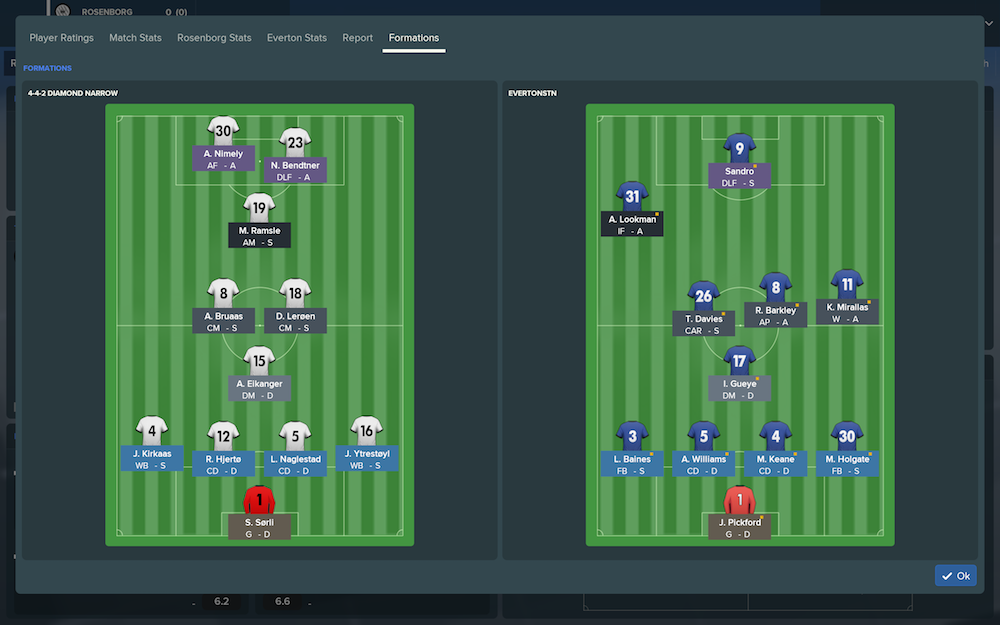 They barely got past the halfway line. That was lovely. Ninety minutes of attacking, punctuated only by their repeated attempts to kick lumps out of my players. We were well on top even before their inevitable red card and, once again, the 2-0 scoreline didn’t begin to reflect our superiority.

Kevin Mirallas picked up both goals in similar fashion, driving home form 25 yards to finish a move that began on the left through Lookman. He really is a very promising young man. We managed to get a half decent performance out of Ross Barkley, who was replaced to great effect by Davy Klaassen. Once again, it’s a Europa League qualifier, not a Premier League game, but at least this indicates that we’re not doing a lot wrong. Right? 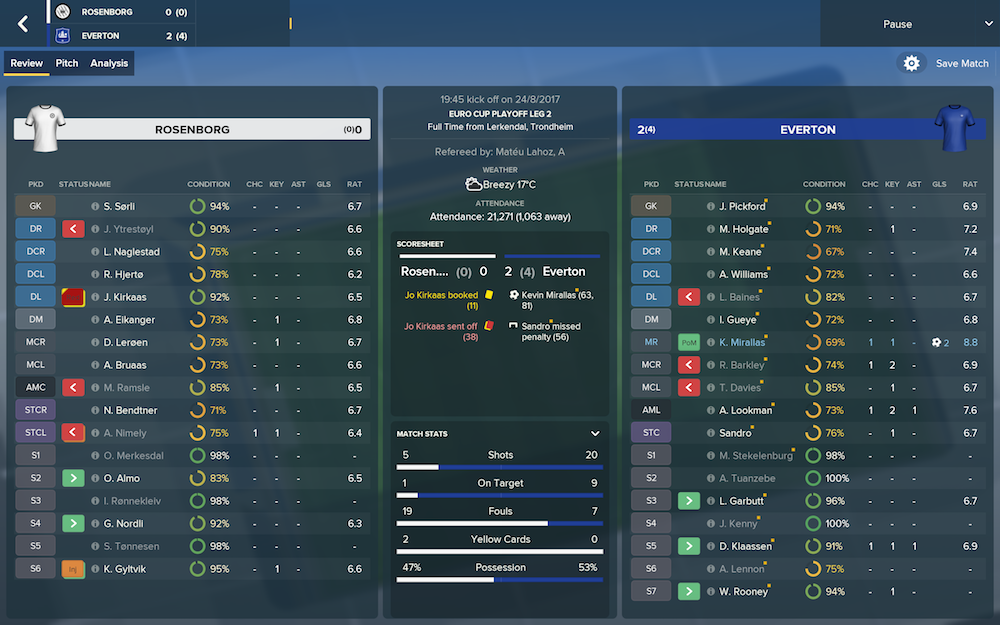 I think it’s fair to say that we could do without losing this one. We’ve played two, lost two, for starters. But it’s also Huddersfield. I can take losing to Bournemouth, these things happen. I can take losing to Spurs, they’re one of the best teams in the league. But we’ve got to be beating newly promoted teams.

I see little point in changing the team. It’s a team that looks cohesive and composed. At least against Rosenborg. But it’s also a team that, unlike our original tactic, can attack with a bit of pace. And we’ll surely find gaps against David Wagner’s side if, as I’d expect, they’re set up to counter-attack. 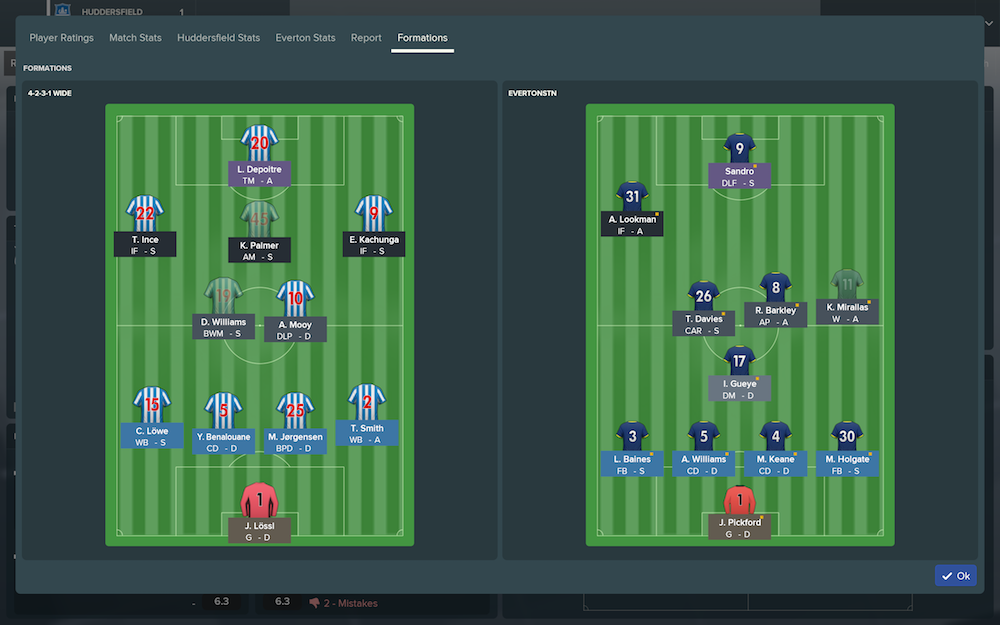 It’s a set piece. Of course it is. They couldn’t get us in open play, so it had to be a set piece. They could barely get the poxy ball before they scored. And then they toss in a corner, we can’t clear it and bang…we’re a goal down just as we were looking good. I can see heads going down all over the park. Then Huddersfield step up and they start coming at us, sensing the blood in the water.

What can I do? Nothing really. I just stare in horror as we carefully build chances only the toss them away with a misplaced pass or a misjudged run. We’re playing well, in a manner of speaking. We’re doing everything I ask of them. But it’s not until the second half that we equalise. Sandro scores again, and it’s Lookman with another assist. But a draw isn’t going to be enough. I absolutely have to win.

I switch to attacking. Nothing. I remove Idrissa Gueye for Rooney and push him up to support Sandro. Nothing. I switch to rapid fire football. Nothing. If anything, all this ambition is only making it easier for Huddersfield to make chances. With ten minutes left, I switch to ‘overload’. And we all know what that means.

For the next five minutes, Huddersfield are scampering through our half like it’s a trolley dash. Jordan Pickford makes a saves for which a statue should be commissioned. And then Michael Keane clears his lines by lumping the ball upfront. And Sandro races onto the ball and beats the defence for pace. And then Sandro is one on one with Jonas Lossl and I have time to look up at the clock and see that we’re in the final, sweat-stained vinegar strokes of the game and when I look back down, Sandro shudders and releases the trigger, exploding into the back of the net and I have exploded too and we have won and we have won and we have won and I might just be able to get to Episode Five.

To the first person who says, “It’s only Huddersfield,” I will have you shot. 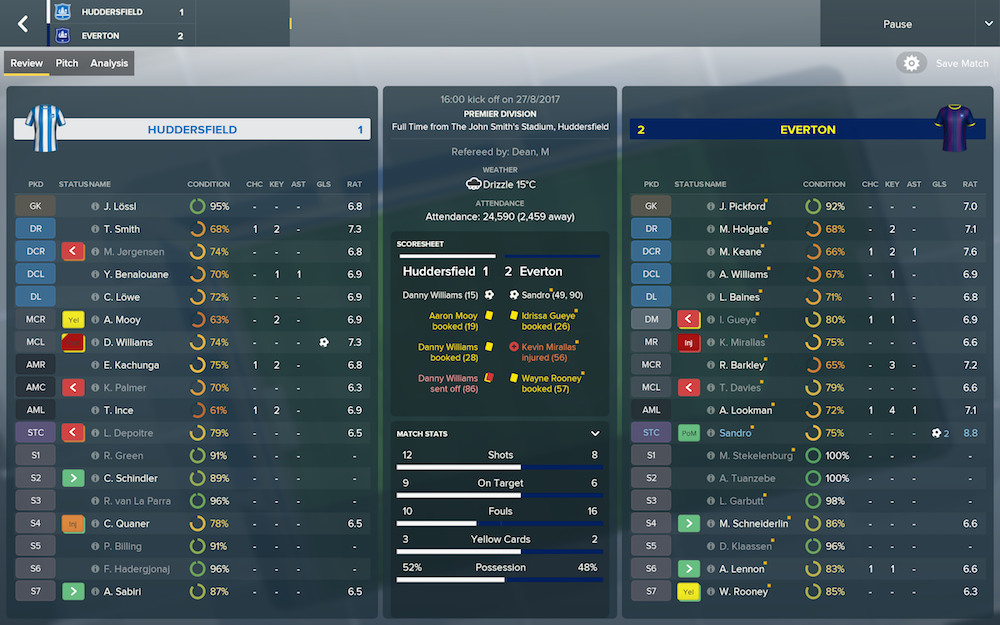 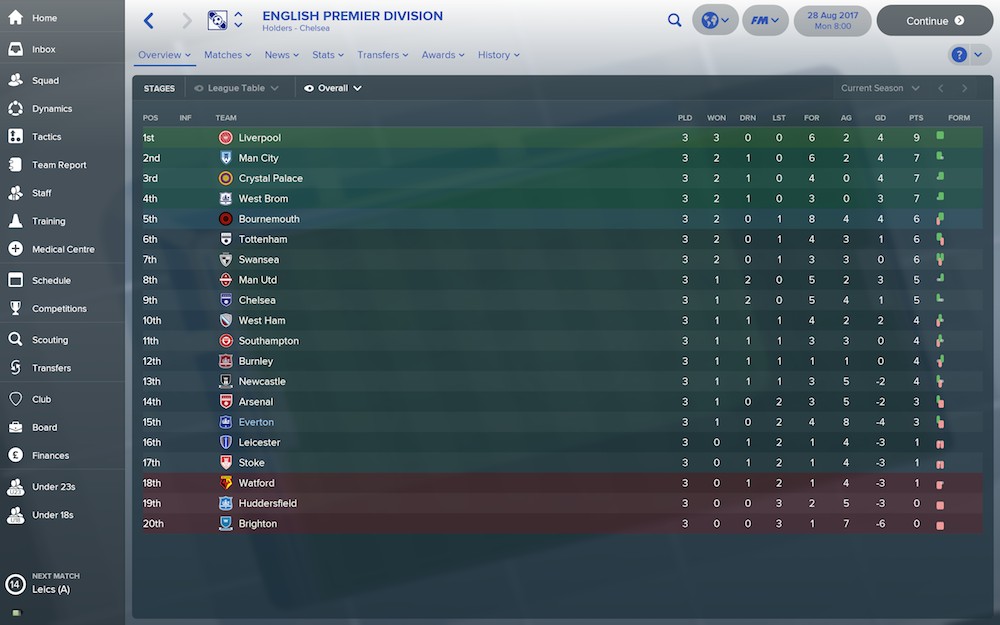