Dele Alli just hasn’t done it for me. Two consecutive 6.5’s are not good enough for this stage of the competition. I haven’t exactly got anything better in the locker, but Adam Lallana is fresh and he’s done well for me. He’ll get his chance. Clyne and Ryan Bertrand retain their places ahead of Kyle Walker and Luke Shaw. And that’s it. Same tactics, mostly the same team. Let’s see what France have got. 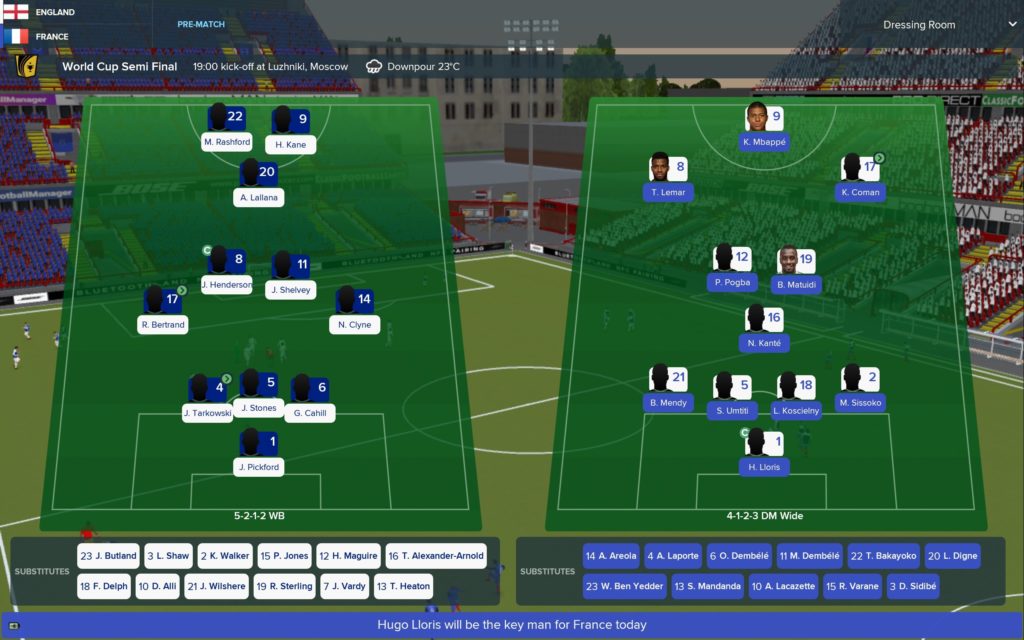 They have quite a lot, yes. France kick off, stretch us about a bit, feed the ball to Moussa Sissoko and his cross is headed home by Thomas Lemar, which is a little annoying given the size of him compared to the size of my *three* centre-backs. Inside the first two minutes, we’re one goal down. Can we respond? 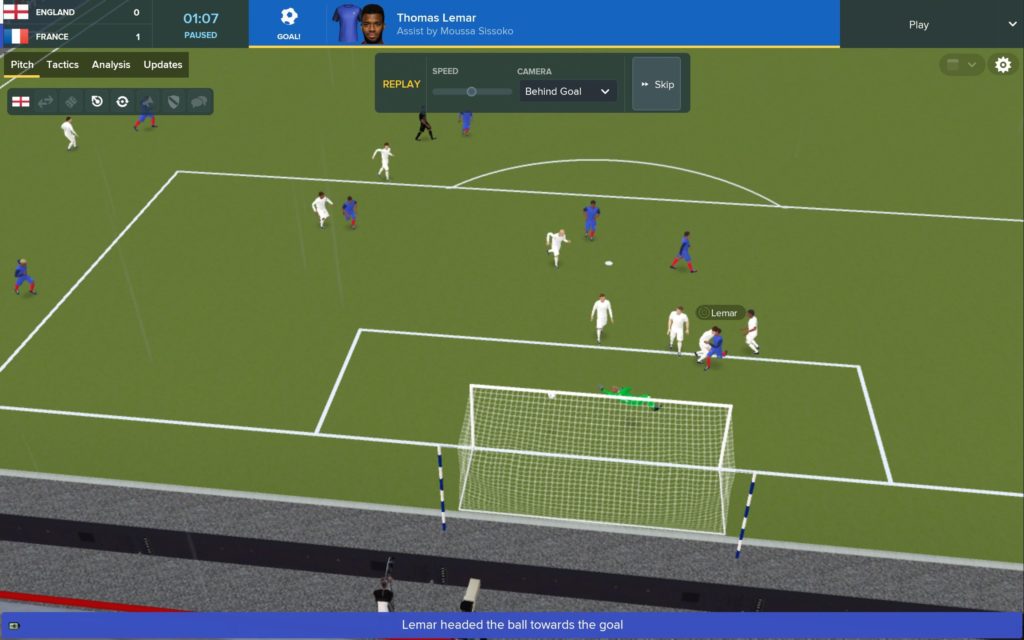 Of course not. In fact, we don’t do anything. And neither do France. For 20 minutes, nothing happens whatsoever. We sit deep and wait for them to commit. They sit deep and wait for us to come at them. Nothing happens. And so, midway through the first half, we take the initiative and attack. It makes very little difference. Our one sortie towards their box ends with a misplaced pass which is intercepted and carried forward by Paul Pogba. The Manchester United man strides imperiously straight through the centre of the pitch and releases Lemar on the left. His high cross swirls and beats Jordan Pickford and bounces off the top of the bar. That was very nearly game over.

I start considering half-time changes and perhaps a half-time bollocking when Bertrand puts a first-time cross into the box and Harry Kane falls over. After giving away three penalties in this tournament, we’ve actually won one. Kane picks up the ball, places it gently on the spot and then sends the goalkeeper the wrong way. Hold the phone, we’re back in the game. 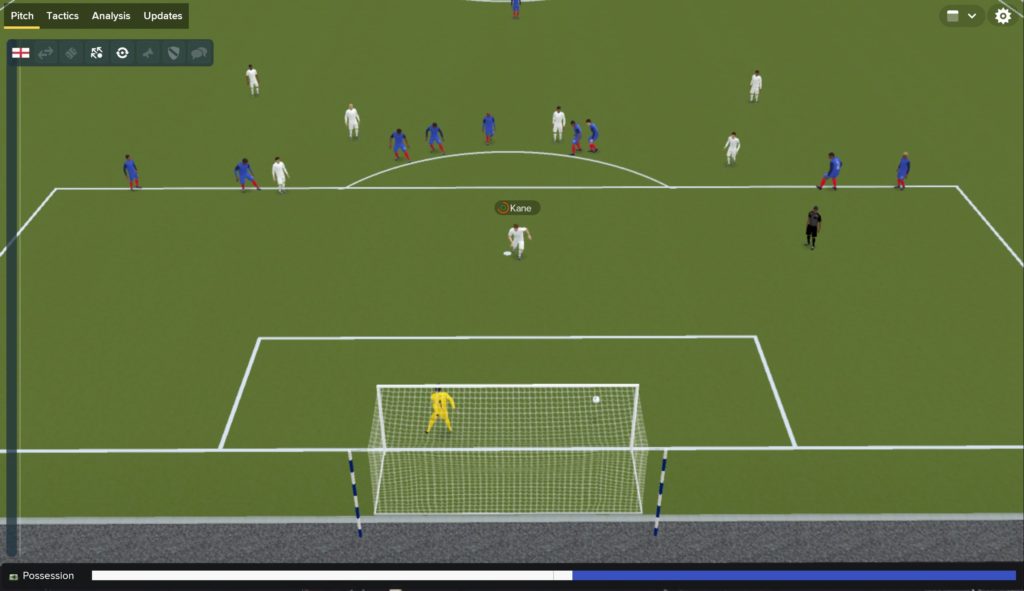 I’m pleased with the players and I tell them to keep it up. We’ve scored now, we’ve rediscovered our belief. And France are tiring. They haven’t been rotating players the way that I’ve been rotating players and this isn’t going to be an easy half for them. We continue to attack because that’s what we’re good at. And we can change our stars here today. We can end this tireless narrative of failure by laying down a marker for all future English teams. We stand, my friends, on the very precipice of history.

France regain their lead within moments of the restart. Pogba pops a low cross into the box and Lemar evades all three of my centre-backs and one of my full-backs to clip the ball past Pickford. The first goal was an appalling one to give away; the second one is far, far worse. France aren’t a team who need gifts, but we’ve given them two. 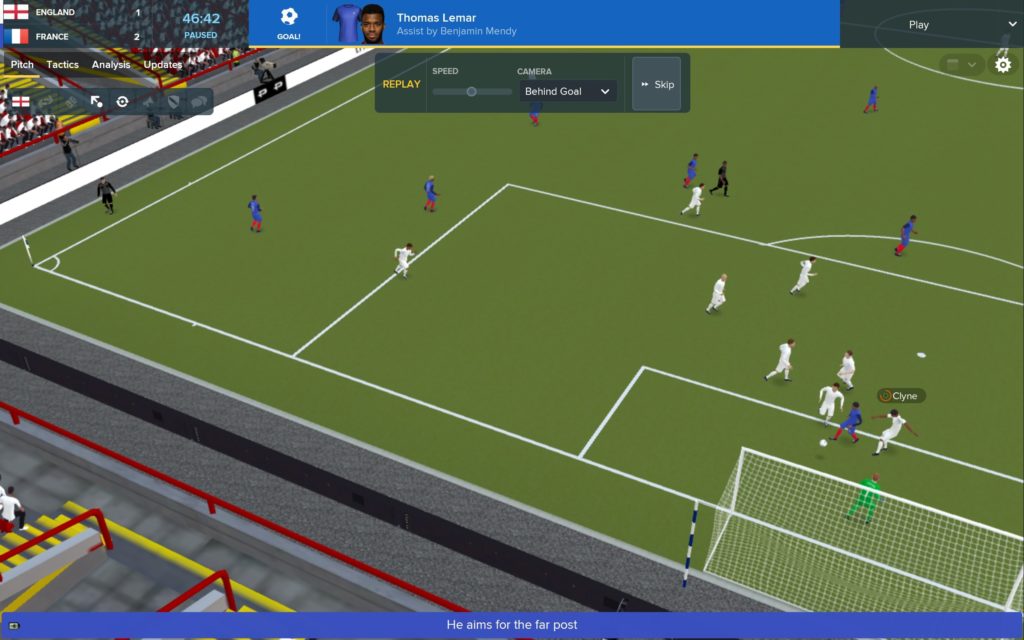 The game just ebbs away without so much as a single chance of note. France are weary, but they drop deep and soak up pressure without ever looking nervous. We’re recording 6.2 ratings across the team. This is no way to lose. This is the very definition of going quietly into the night. And so it ends. Not with a bang, but with a whimper. 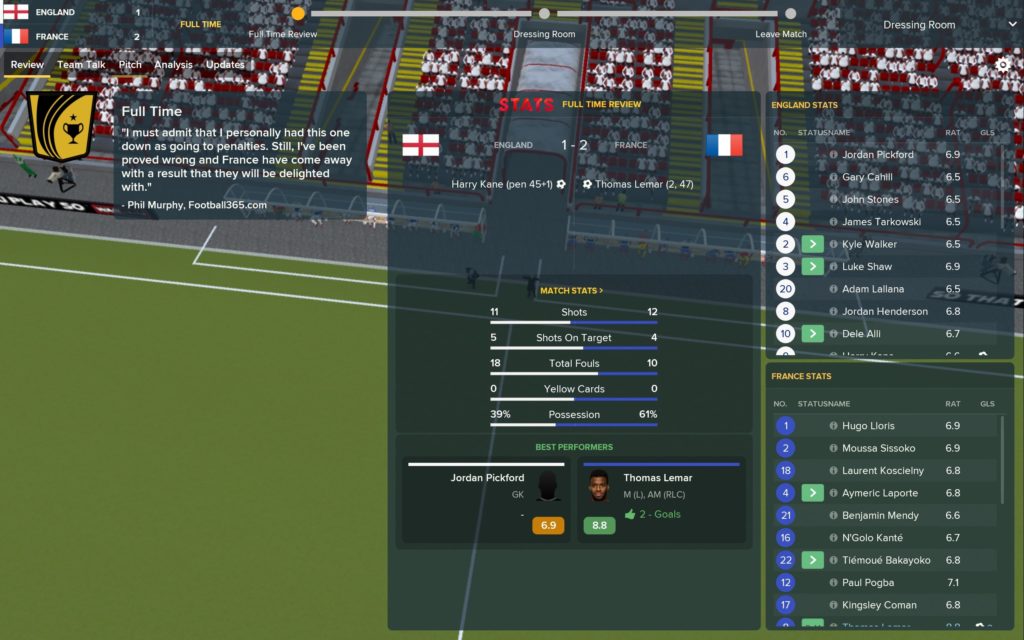 We still have a third place play-off, but I have no interest in that. I pick a complete reserve side and we offer up 120 pointless minutes against Portugal, predictably losing the penalty shoot-out when Trent Alexander Arnold fluffs his lines. The press are very happy, the Football Association are delighted, the players return to Luton airport and it’s all over for another four years.

It’s all over for me too. I can’t continue. I won’t get closer to touching glory than that. It’s time for a new man. Perhaps it’s time for Eddie Howe. But my time, certainly, has passed. It was, while it lasted, a wonderful journey. But now all I want to do is to climb into my drinks cabinet and shut the lid on the world.