Nothing changes. Time passes, the world turns, the game updates, but it’s the same old story, isn’t it? I take over a football team, I start reasonably well, I begin to believe I might be getting somewhere and then reality bites a chunk out of my arse and everything I’ve built collapses around my ears. It doesn’t matter if it’s Everton or Arsenal or England, it’s always the same. I’m Sideshow Bob and this game is 100 dropped rakes.

I am still in shock at how poor we were against Scotland. We escaped with a 3-3 draw, but we didn’t deserve it at all. For at team with this much raw talent at its disposal to require a catastrophically clumsy Grant Hanley own goal just to maintain a sliver of dignity is intolerable. If we turn up in Russia and play like that, we’ll struggle to make it beyond the group stage.

Now we have Slovakia in what is essentially a dead rubber. We’ve already qualified and there is no pressure. But I like pressure. Pressure makes people perform. The very last thing we want to do is wander out in our slippers expecting a nice stroll under the lights. 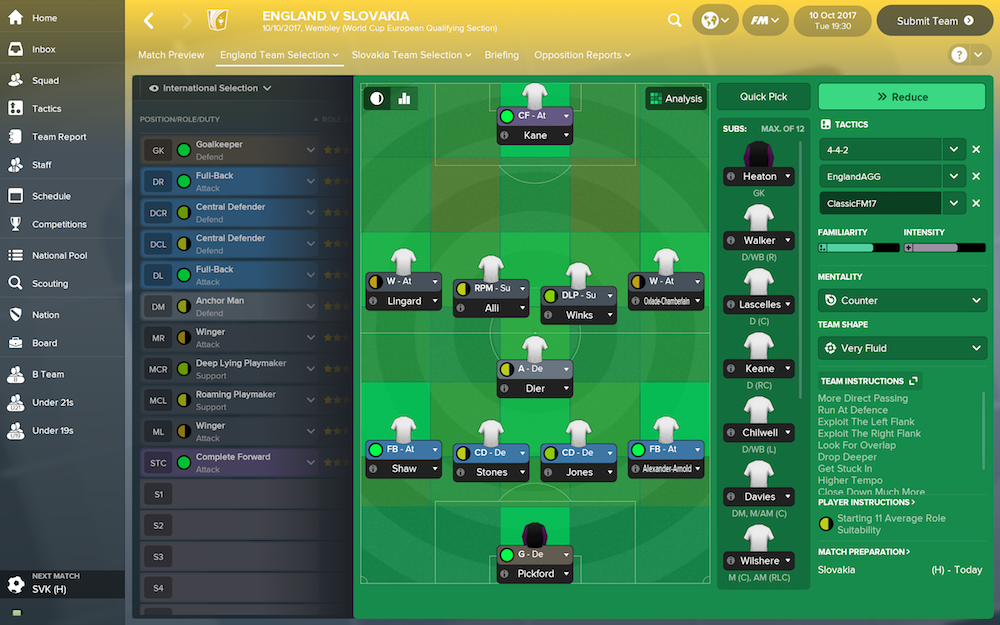 It’s entirely possible that we were too aggressive against Scotland. That we might have been better off dropping back and inviting them onto us, rather than charging over the hill with our balls flapping in the wind. I’m going back to a formation I used to great effect on FM17. It’s the clenched fist 4-1-4-1; a shape that relies heavily on pace and low crosses. We sit deep, we soak up pressure and then we explode in a devastating counter-attack. That’s how it works on paper anyway. I won a Champions League with Arsenal playing like this. Mind you, I also did so badly with it at Everton that I felt physically sick whenever I tried to load the game.

I feel a little rush of adrenaline as the players trot out. As if something wonderful might be about to start. This nook-shotten isle’s brightest and boldest are out there for me tonight and this might just be their moment.

For the next 40 minutes of game time, nothing happens. Nothing at all. I check the highlights settings to make sure I’m on ‘extended’. I am. We’ve had three long shots, all wildly off target. They’ve had one and it took a coat of paint off our post. This is not ideal. And then Dele Alli picks up the ball in the middle.

He’s already been booked and I have half a mind to take him off at the break, but he make a compelling case to be retained when he picks up the ball in the middle of the park, twists to make a bit of space and then finds Lingard with a perfect pass out to the left. Lingard meep-meeps down the flank, draws the attention of the defenders and then cuts the ball back *low* to Harry Kane. And Kane does what he does and we’re 1-0 up. I am encouraged. 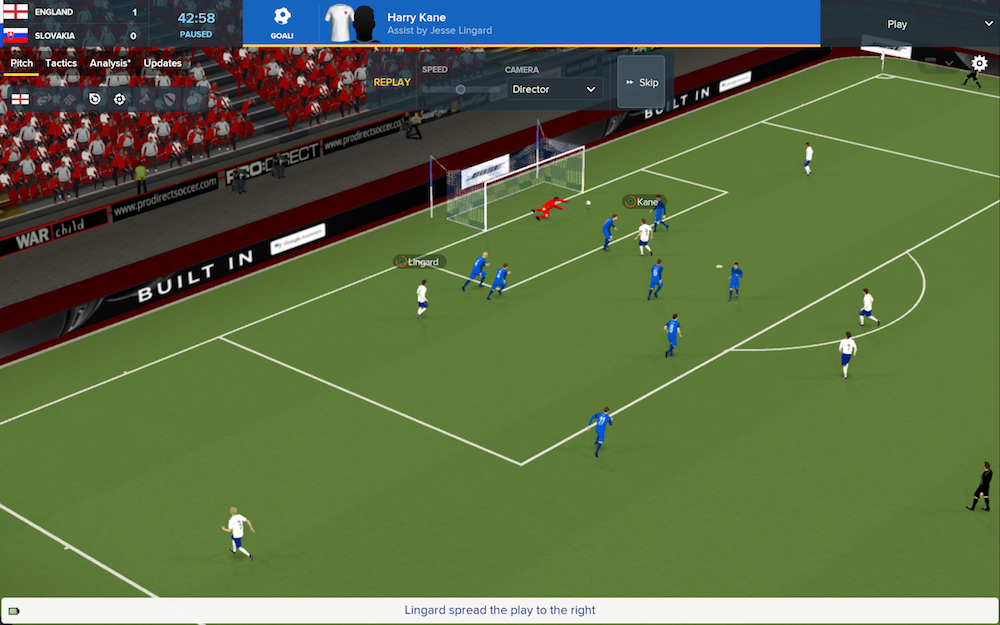 I tell them at the break not to get complacent and they follow my instructions to a tee. Winks hits the bar after a clever free-kick, Kane hits the post moments later and then Alli works his magic again. This time he plays the ball out right to Oxlade-Chamberlain and it’s the same story. The Ox drags the ball back *low* into the box and Kane is there to finish. They’ve got it. By Jove, they’ve got it. 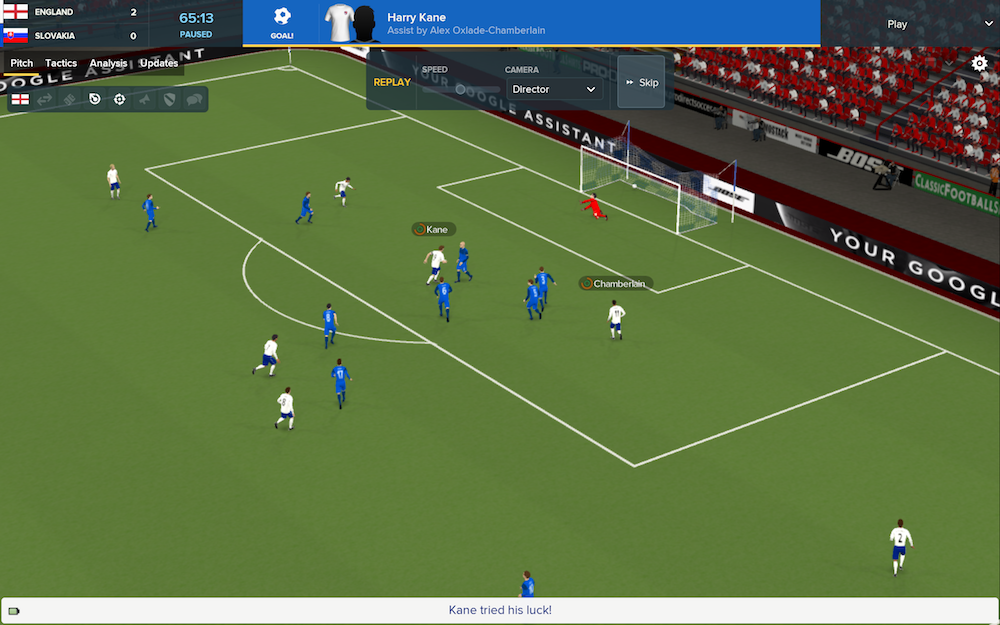 With the game all but won, I withdraw Kane, Alli and Luke Shaw and send on Rashford as a lone forward, Jack Wilshere as a midfield dynamo (stop laughing, he was really good once) and Ben Chilwell because he’s the only plausible cover on the left. One minute later, we’re 3-0 up. Rashford, showing no ill will to the man who replaced him in the team, sets up Lingard for the game-killing goal.

But bless them, they keep pushing on. We make scores of chances and add a fourth with five minutes to go, utterly overwhelming the Slovakians with a counter-attack that started by the brilliant Alexander-Arnold and finished by Oxlade-Chamberlain. 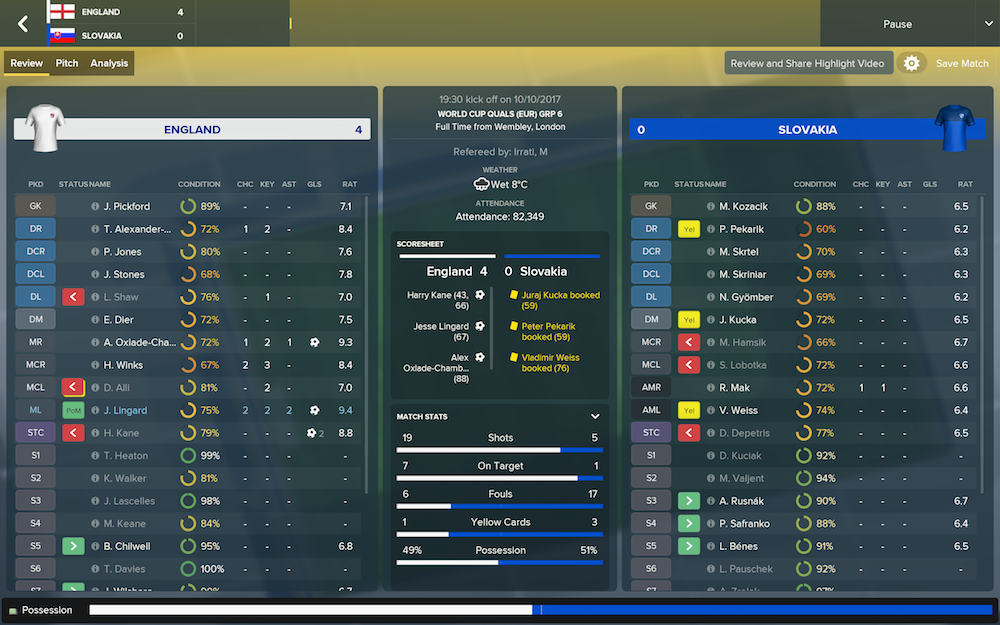 We’re back on track. And now all the world will know that the lion has awoken. Slovakia’s demise will serve as a warning to others. There is a team in here. A great team. And we’re taking them to Russia. And I think I may have given myself an erection. 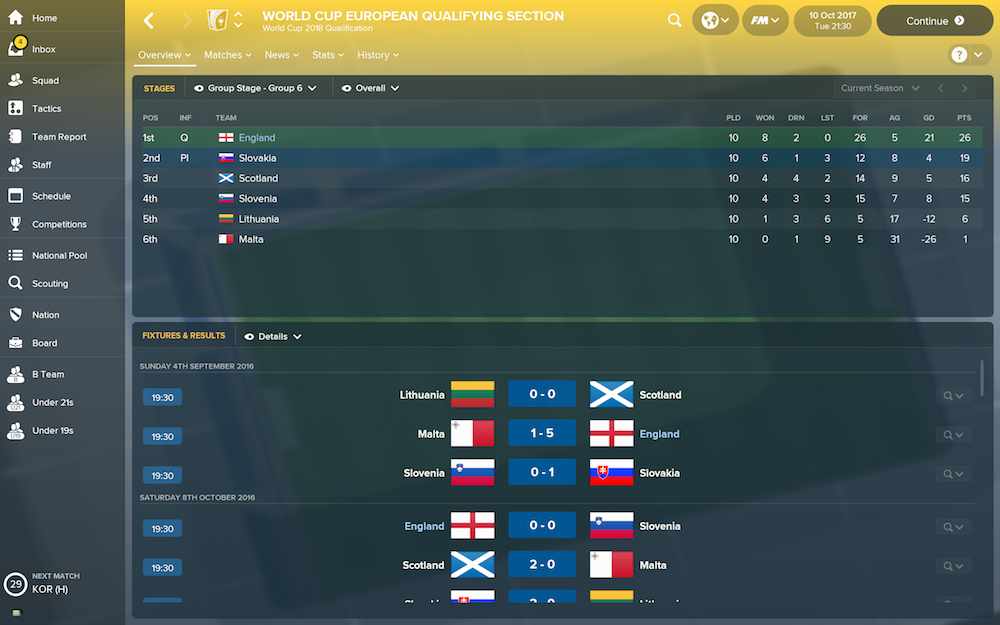