The pitfalls of international football are already becoming painfully obvious. There just isn’t any room for manoeuvre. I’ve had no warm-up games and precious little preparation. I’ve got a squad of players who have only played three league games at most and been tossed into the fray, forced to follow a game plan that’s being tested on the hoof. Also – and this does feel like it might be important – their manager is a proven failure who hasn’t even racked up 100 hours on FM18 and has little idea of what works and what doesn’t. This is learning by doing.

Still, the first day on the job went well enough. We scored twice in the first half against Slovenia and then shut the game down nicely in the second. They scored because we were playing a highly aggressive formation which left too many players up the pitch. We were punished, but we learned from that and it won’t happen again. And so, as we welcome Lithuania to Wembley, I’m going to play exactly the same highly aggressive formation that left us so vulnerable last time.

Stick with me here. Lithuania are away from home and they’re not very good at football. There’s no obvious source of pace in their ranks and I think we can take the risk. I don’t believe there’s any such thing as a bad game plan. They’re all good game plans, it’s just that some are executed at the wrong time. 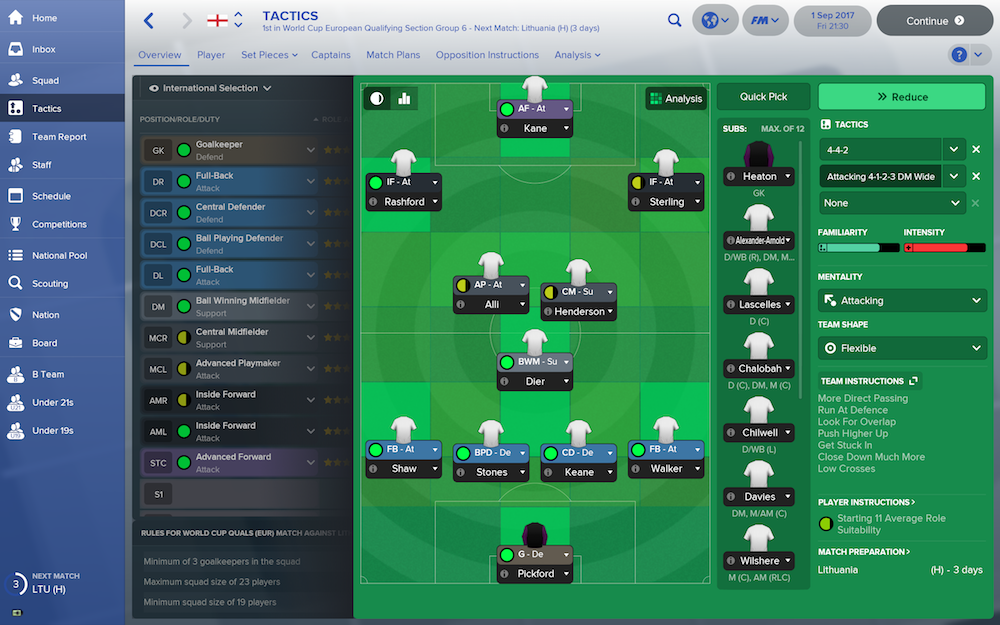 I will make one change, though. I wasn’t exactly blown away by Nathaniel Chalobah on his debut, so Eric Dier will come in and play the safety role. But that aside, it’s more of the same. We push up, we play fast, we have full-backs as wingers and we get up and support Harry Kane. In time we’ll develop more conservative methods, but for now I think we should just go for it.

As the first whistle blows, I break into a sweat. This is too aggressive, isn’t it? This is too cavalier. Why didn’t I just play a simple 4-4-2, keep it tight and wait for the natural order to reestablish itself by virtue of a narrow 1-0 win? But just as I’m reaching for the tactics button, Dele Alli plays a lovely ball out to Marcus Rashford and the young forward hits it to the back post where Raheem Sterling is on hand to apply the finish. Six minutes before half-time, we have a cushion. Alli initially loses the ball but chases and harries to regain it, before playing it out to the left for Sterling. This time, it’s a deep cross from the Manchester City man and it’s Harry Kane who’s there to finish. We should be four or five up by now. We’ve absolutely dominated Lithuania, who can’t even get a shot off.

We don’t score our third until the hour mark, which is disappointing as we’ve had 20 chances by then. It’s Alli again at the centre of everything, which is reassuring because he was pretty average against Slovenia. He’s been stroking the ball left and right all night, pushing it into space for Sterling and Rashford to exploit. The latter gets down the flank and cuts it back for Kane to finish. And you know how I feel about a low cut-back. 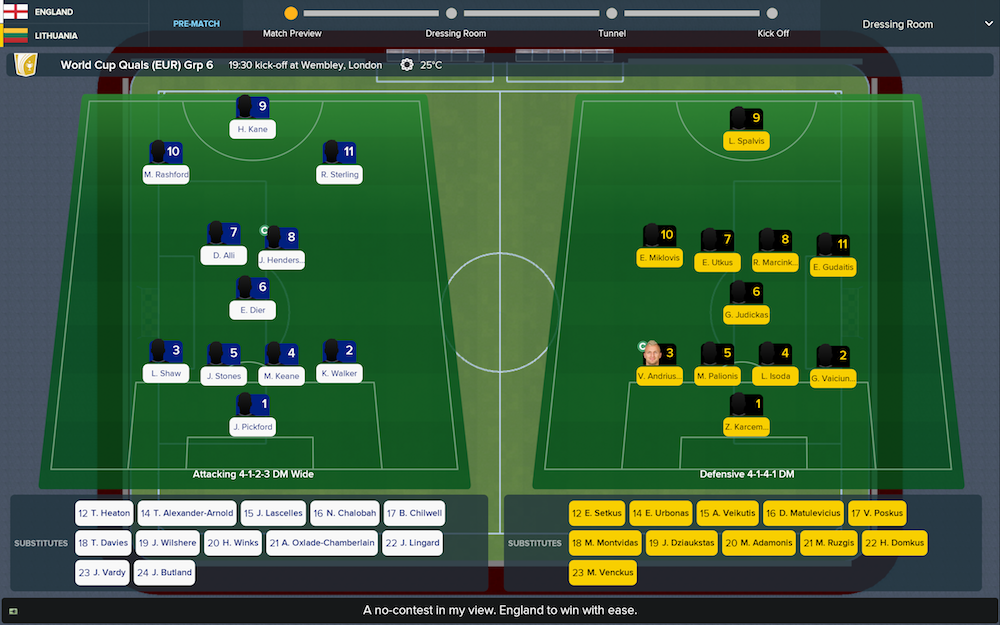 There’s some tiredness in the ranks, so I withdraw both full-backs and replace them with debutants Trent Alexander-Arnold and Ben Chilwell. Ten minutes later, with Lithuania tired and broken, I take out the defensive midfielder and give Jamie Vardy a chance to partner Kane in a 4-4-2 to see out the match. Kane should complete his hat-trick with five minutes to go, but he’s denied by a double save and so it’s Rashford who pokes home the third rebound for him. Sixty seconds later, Kane plays a through-ball for Vardy and it’s five.

It should have been 10. If we finish as poorly in Russia as we’ve done tonight, this won’t be a long series. But you can’t complain. We’re not technically qualified yet, but it’s as good as certain. A single point from our last two games will be enough. And we can rubber stamp everything in Scotland next month… 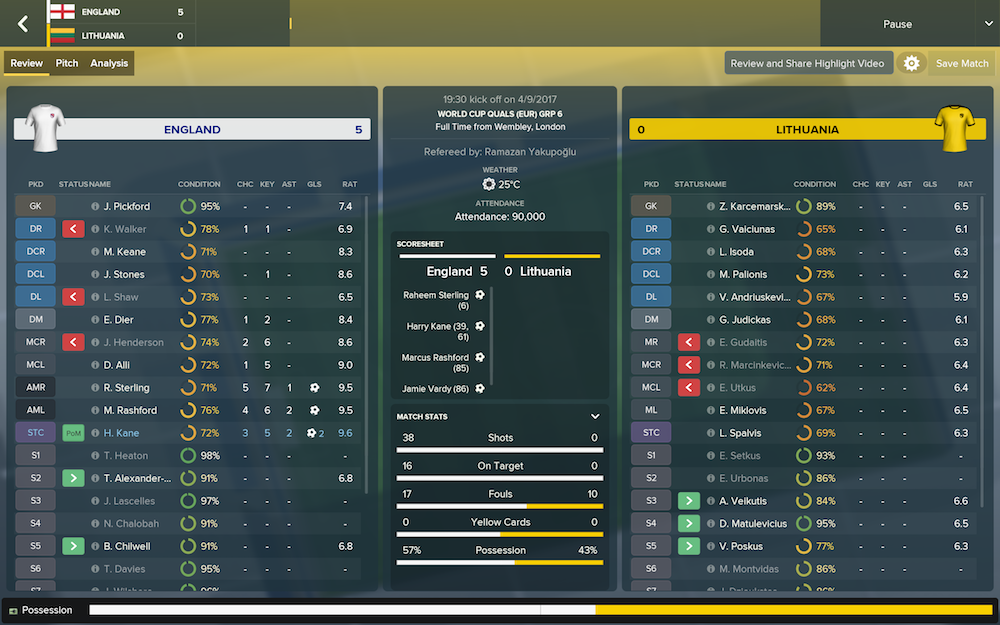