With the World Cup all sewn up for us table-topping types, we’ve got a couple of friendlies to keep the Wembley coffers full. Cameroon and South Korea await. Now I’ve always said that these games should be used for wild experimentation so that a manager always goes to a tournament with a variety of options at their disposal, or at the very least, an idea of what really doesn’t work. However, now I’m in the hot seat, I’m too scared to experiment. There’s no point flinging out a back three, getting humped and then everyone getting in a strop before the tournament is there? We’ll stick to the plan.

Remarkably, there are hardly any injuries and I’m able to pick a squad with just two changes. Tom Davies has been very much on the fringe of the group and I think I’d rather have more pace at my disposal than tyro-midfield ability, so in comes Demarai Gray. He can take set-pieces too, so he may be useful.

Danny Welbeck was spectacularly bad against Scotland, so he also drops out. Unfortunately, we’re not exactly overwhelmed with striking talent. And so it’s with heavy heart that I summon Troy Deeney to St George’s Park. The press report that Welbeck is being “rested” Yeah. Rested. Let’s go with that. 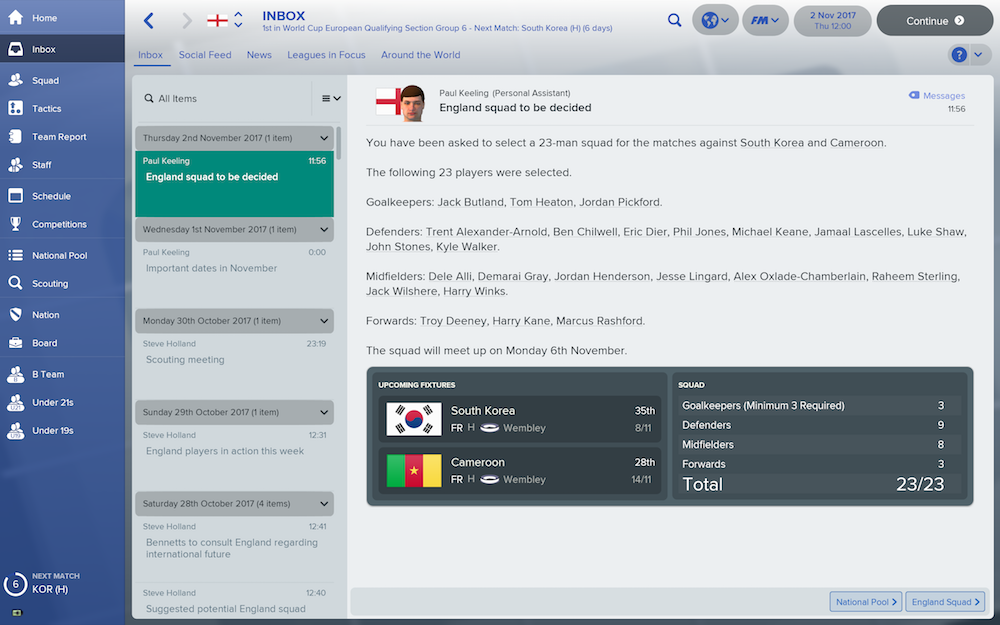 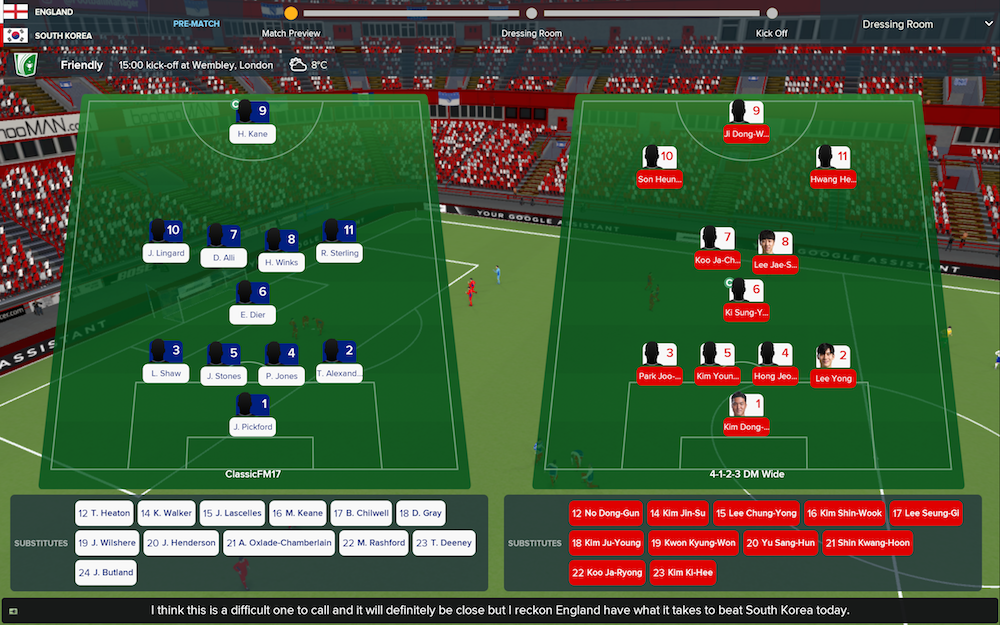 This formation, as long-suffering readers will recall, is all about holding one tight shape, absorbing pressure and then shouting BANG! and all running up the pitch at once, ideally down a flank, ideally executing a smart low cross and finishing calmly from close range. However, it’s not exactly conducive to exciting football. Literally nothing happens for 22 minutes, before Koo Ja-cheol bounces one off the crossbar to wake us all up. And then nothing at all happens for the next 18 minutes. But then we win a free-kick. 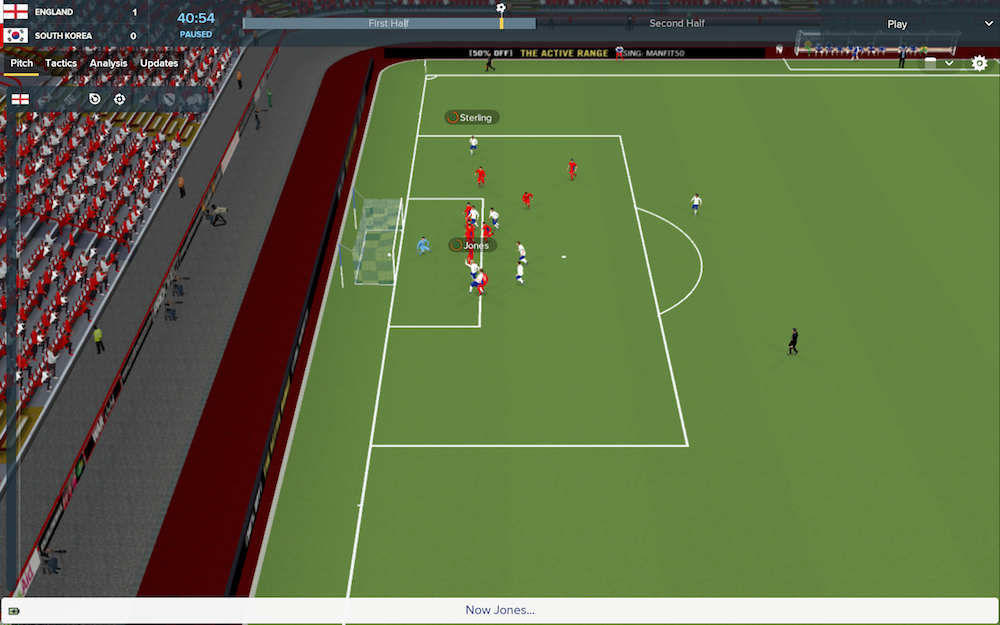 Rather than crossing the ball, Raheem Sterling taps it over to Jesse Lingard and then bursts forward. Lingard returns the ball and Sterling has room for the cross. He doesn’t go low, he goes high and deep and Phil Jones is there to screw up his face and nut the ball messily over the line. But the goal masks a fairly poor performance and I tell the players that at half-time, destroying the confidence of Luke Shaw in the process.

After another 15 minutes of absolutely nothing happening, I make changes. Kyle Walker comes on for Trent Alexander-Arnold, with Gray instructed to sit ahead of him on that refreshed right flank. And who’s that leading the line for England? Why, it’s Troy Deeney of course.

Sixty seconds later, South Korea equalise as Koo Ja-cheol finishes off a nicely worked free-kick that has echoes of Javier Zanetti in 1998. We nearly go 2-1 down five minutes later, avoiding that fate only thanks to a remarkable reaction save from Jordan Pickford.

“Show some passion!” I bellow from the touchline. One minute later, Dele Alli is booked. And the rest of the game simply evaporates into nothing more than an exercise in light jogging. It hasn’t taken me long to capture the spirit of the England football team. I tell the players they’ve let themselves down and walk out in a strop. 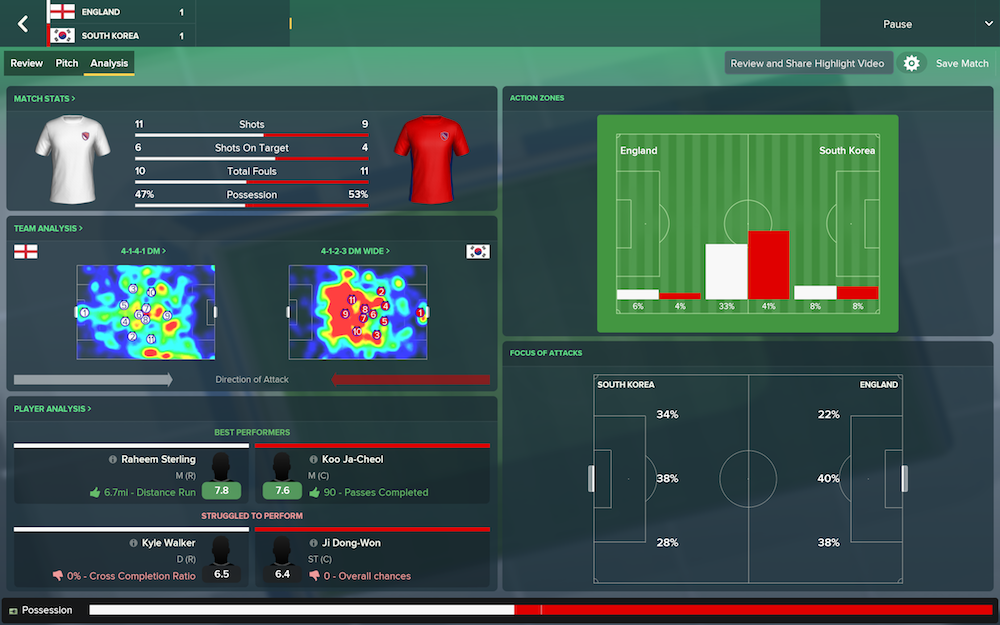 But I can’t let my head drop. We’re not actually bad. It’s just that we’re resolutely not good. Or in other words, we’re England at any time post-2004. But perhaps a win over Cameroon will lift my spirits. Not that there’s any excuse for trying any of that attacking football. We’ll keep to the same shape. 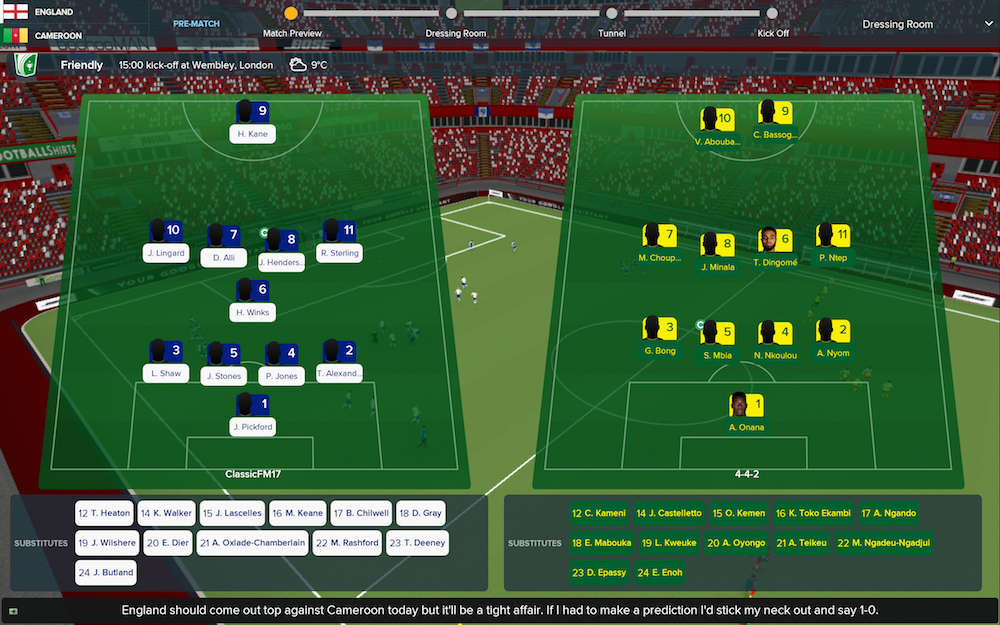 I decide not to make too many changes to the team either. I bring Jordan Henderson in from the cold after his appalling set-pieces. Tottenham have requested that Eric Dier only plays 45 minutes, but I’ll give him more time off than that. Harry Winks can drop back to his position and Dier can have a long, hard think about his priorities. I’ve tweaked a few roles, so Henderson will have the freedom to get forward and hopefully we’ll make a few things happen out there for the supporters.

No. Nothing happens. Nothing happens at all. The needle returns to the start of the song and we all boo along like before. And we’ll all be lonely tonight. And lonely tom… hang on, something’s happening… yeah, Cameroon nearly scored. And that’s half-time. One highlight and it was for our opponents. I am not amused.

Enough of this. Let’s consider the clenched fist an option for when we don’t want anything to happen. We’ll give that aggressive, Klopp-like 4-3-3 we’ve been working on a try. And Dier can come on to firm it up with Jack Wilshere, replacing Alli on account of the silly boy getting himself booked again. 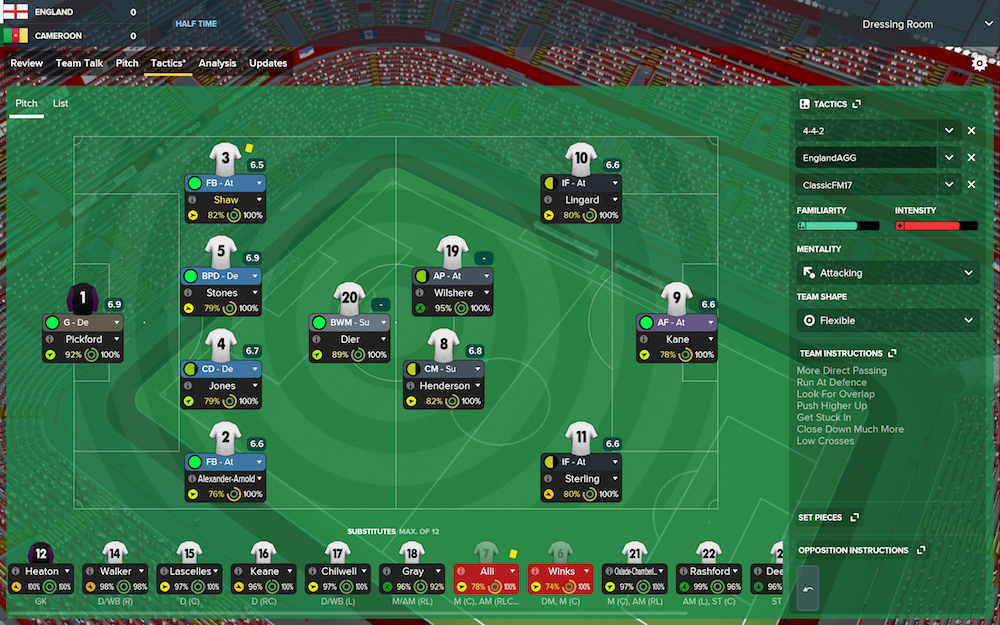 Oddly enough, we’re much more lively in the second half. Harry Kane misses an absolute sitter shortly after the break, heading Lingard’s cross wide. Lingard twice goes close himself shortly afterwards, lashing a shot over the bar after a promising breakaway and spurning a wonderful chance when he’s teed up by Sterling. With 20 minutes to go, I make my last change and bring Deeney on for Kane. Ha ha ha! No, of course not. I bring Marcus Rashford on for Kane. I should have put Deeney on. With seven minutes to go, Gaetan Bong scores for Cameroon.

And then something very odd happens. We react, we break down the left, Lingard slides a low cross over for Rashford and Bong, still celebrating his goal, slides in and scores another, but this time for England. We’ve done it! For the second time in four games, we’ve been rescued by a spectacular own goal!

So for all that anxiety, we can at least… hang on, something’s happening. Oh… Leonard Kweuke has scored a late winner for Cameroon. I see.

I think, on balance, I was happier when I was playing Civilization IV. 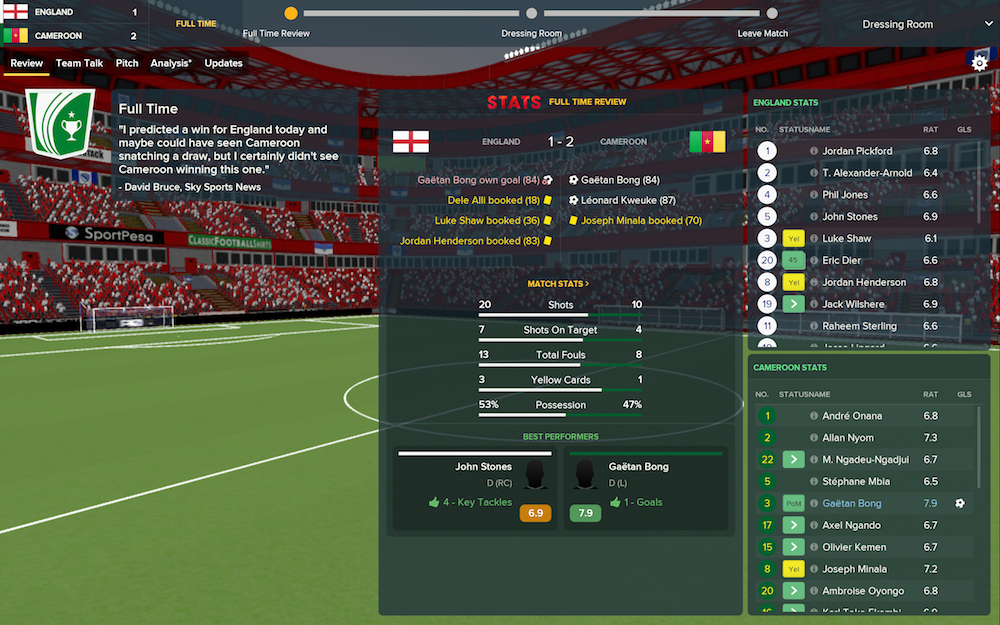