Let’s be honest, I should have been sacked by now. After a promising start, this assignment has turned into an absolute nightmare. We qualified easily from a simple group, but we’ve failed to win any of our four recent friendlies and I’ve long since forgotten what I was trying to do with this team in the first place. With two friendlies left before the World Cup itself, I’m left with no other option than to tear it all up and start again, hoping against hope that I can throw enough shit against the wall to leave some clinging to the wallpaper.

For the first time, I’m trying a back three. One to push up and join the midfield (probably John Stones), two to stay at home and keep us safe (no one has thus far proved capable of this). We’ll use Luke Shaw (Danny Rose is injured) and Kyle Walker as the most cavalier of wing-backs and I’ll experiment with the midfield. I think a deep-lying playmaker and a cari…care…car…midfield shuttler will be able to give us a base and then we can use a proper No.10 to open teams up. That gives us two strikers, a biggie (Harry Kane) and a quickie (possibly Jamie Vardy). I’m not going to mess around too much with tactics. We’ll play fast, run at people and hope that it doesn’t go horribly wrong. And, as it’s Wales, let’s hope that Gareth Bale has an off-day.

Gareth Southgate is wise enough to know that picking a 30-man squad and then culling seven of them is a great way to destroy morale, but frankly I’ve always enjoyed the bitter gladiatorial infighting that ‘the cut’ offers. Our new formation means today is a bad day to be a winger, but I take Raheem Sterling along on the off-chance that he can do a job up front. Injuries have decimated the national pool, but I think there’s enough here to be getting on with – though some of the players I’ve ignored would beg to differ.

And the mission to assess my 30 and cut them to 23 goes horribly wrong when it transpires that I’ve scheduled my friendlies for after the squad deadline. So seven people have been called up for no reason whatsoever. One way or another, I don’t think I’m going to be allowed to carry on after the World Cup. And I don’t think I entirely disagree with the bookies’ assessment of my chances. 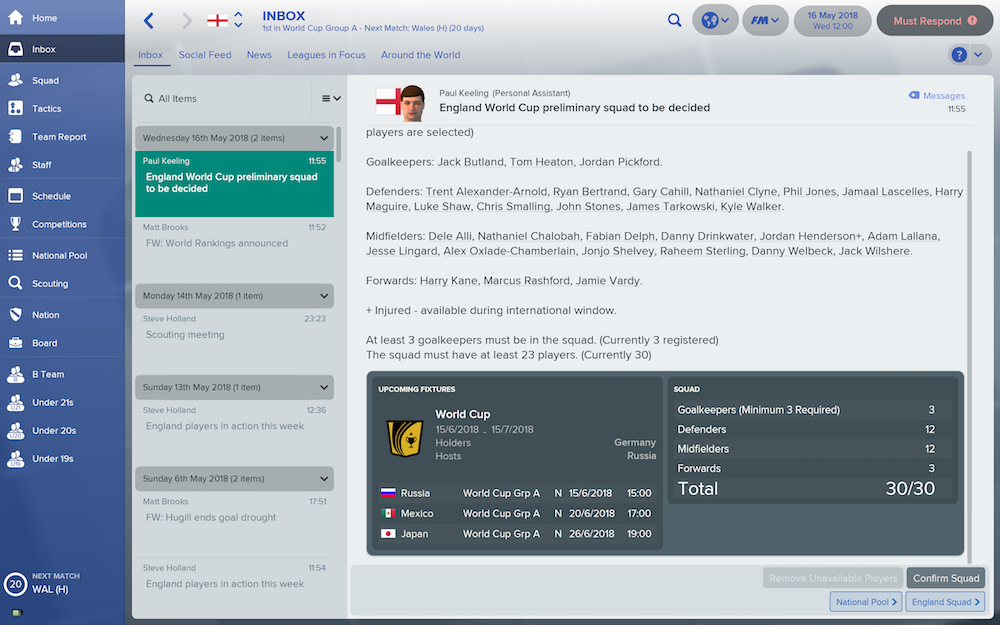 We start… really well. Walker and Shaw get right up the field and we’re all over them. We should have scored twice in the first five minutes, but we take the lead in the sixth when Vardy heads the ball against the bar, it crashes back into his face and bounces over the line. And that came from a Kyle Walker cross. We continue to make chances, really good chances, thanks to a combination of searching crosses and great big balls over the top, so it’s something of a surprise when the defence opt to leave Bale completely unmarked at a corner and he equalises.

For the first time since taking over as England manager, I’m calm. We’re playing very well. It’s only a matter of time, surely. Quite a lot of time, though. Enough time for me to make six changes on the hour to freshen things up, one of which is the use of Sterling as an advanced forward. When he misses two one-on-one chances, I’m beginning to suspect that I’ve screwed up again, but with 20 minutes to go Adam Lallana wellies one up in the air, Sterling races in and absolutely smashes it into the back of the net from close range. 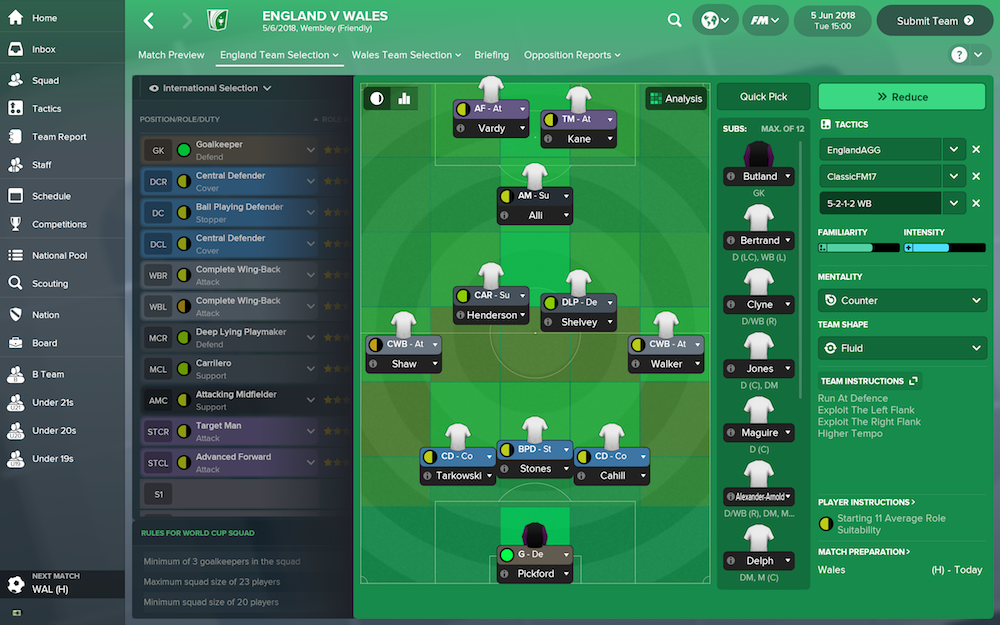 It has been a very long time since I won a game and so I drop the team back into a 4-5-1 and switch to defensive, time-wasting and possession retention. And we hold on with a degree of comfort. But was it a fluke? The only way to find out is to bound onwards to our next friendly against Northern Ireland.

After 19 minutes of precisely nothing happening, I decide a counter-attacking mentality was probably a little cautious and I urge my players to attack. Nothing happens. I stare with interest at the clock as it rolls forward, 15 minutes, 20 minutes, 25 minutes. I check the match stats. We’ve had two shots; they’ve had none. They’ve had 55% possession. 30 minutes, 35 minutes, 40 minutes. 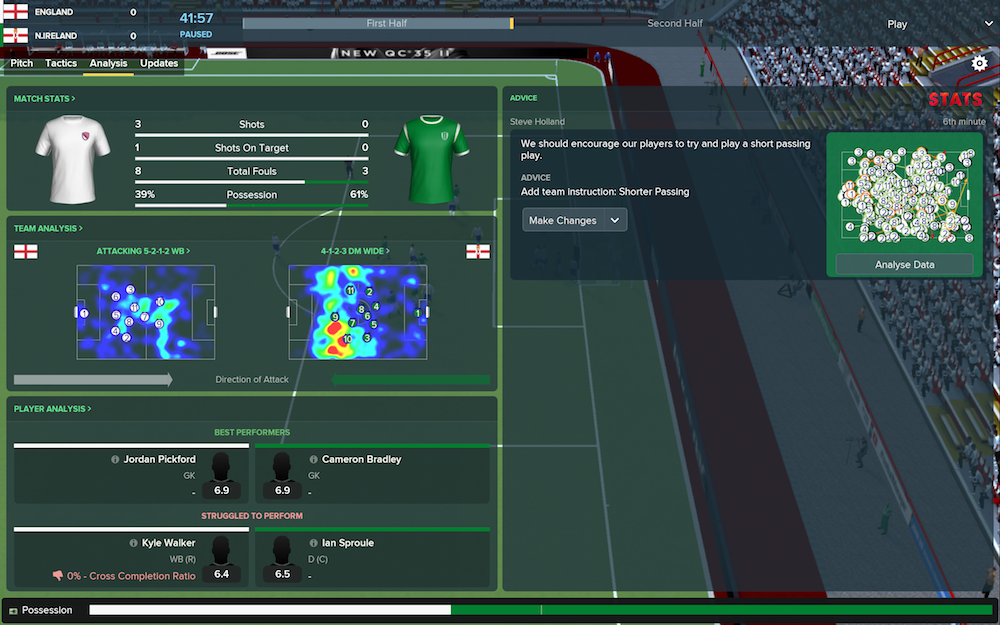 I pick up the laptop and turn it around carefully in my hands to see if something has gone wrong. It’s roaring like a rescue helicopter, but that’s pretty normal for this laptop. The game doesn’t appear to have crashed. What’s going on? With two minutes to go, Vardy is put through one-on-one and smashes his shot into the goalkeeper’s shins. So it *is* working. But with barely 30% possession, it’s obviously my players who aren’t. At half-time I bollock everyone, and pull both full-backs off (Bloody hell, Alf. At City, we just get an orange at half-time etc etc). Vardy can go too. Sterling comes back on.

After another 10 minutes of nothing, I switch to extended highlights. On 66 minutes, still having only watched one tiny passage of play in more than two-thirds of the game, I switch to comprehensive highlights. Finally, I have something to assess: a very deep Northern Ireland team patiently playing keep ball and chatting among themselves.

Well, that’s enough of that. I tell my players to close down all the time, to push right up and to get stuck in. Now the chances come thick and fast, but still they resist. Kane misses a sitter and I begin to wonder if it’s worth applying for League One jobs now, or to just wait until after I go out in the group stage. But then, mercifully, Nathaniel Clyne stings the hands of the keeper with a rasping shot and Kane slots away the rebound. We’ve won. Again. How odd. 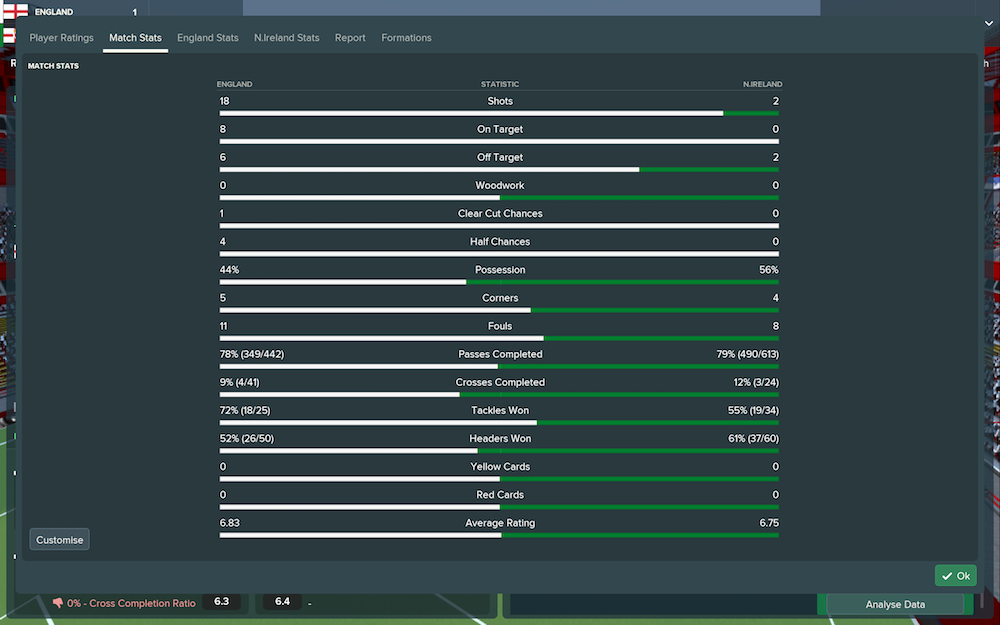 But that’s all I can do now. Russia, Mexico and Japan await. I’m still not particularly confident, and I’m not sure how much you can read from two single victories over non-qualifying nations. But we’re looking a lot better than we did when we were getting played off the park by Zambia. And as a man who has enjoyed little success in this incarnation of the game, I’ll certainly take that. 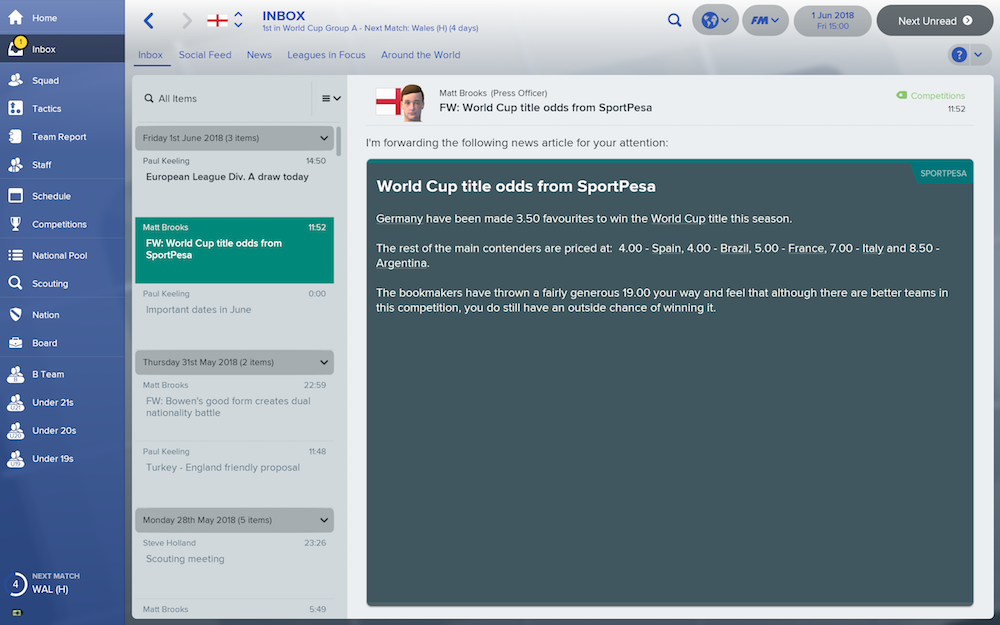