The waiting is over. The World Cup is about to begin. Everything has led to this moment. The straightforward qualification process. The winter friendly meltdown. The steady buzz of pre-tournament victories. And now this… Russia in Russia and the first game of our adventure.

There’s no way to assess our opponents. They’ve had poor results in their warm-up games, but they’re on home turf and I’m terrified that this is going to go wrong. I have a formation, though, a formation that seems to work. It’s all about the full-backs, who provide the width. There’s creativity and industry in the middle. There’s a solid base at the back with a ball-playing defender. And we basically just get the ball wide, run at people and see what happens. Don’t knock it, it seems to work. I just need it to keep working. 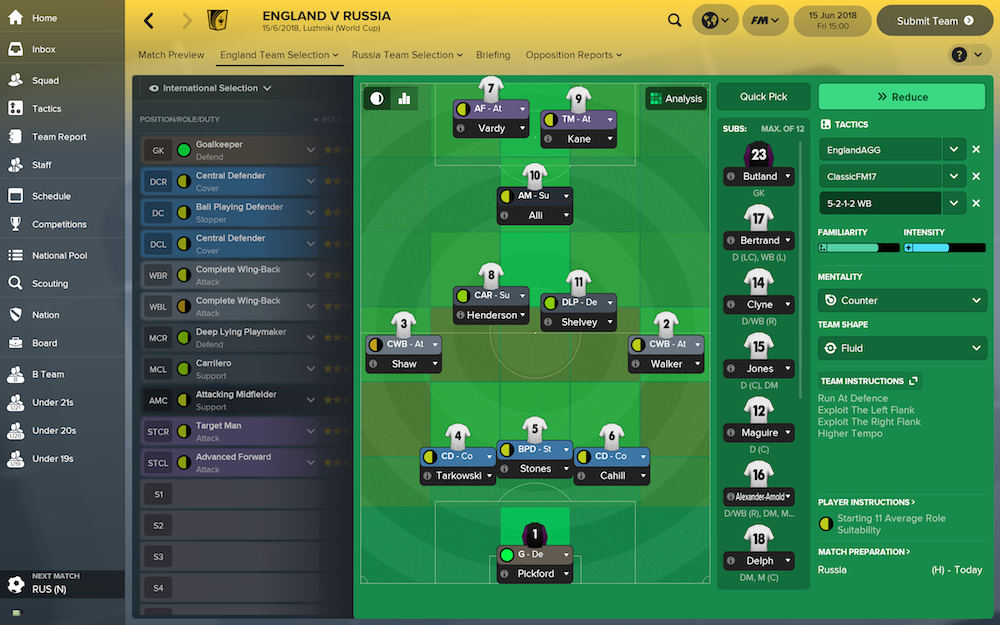 The first thing we do, the very first thing, is give the ball away. Back it goes from the kick-off, Jordan Henderson takes a touch and blasts it straight past the ears of Luke Shaw and into the instep of Alan Dzagoev. Inside me, something buckles. But two minutes later, we’re in the lead. Dele Alli plays the ball out wide to Shaw, he drills it back across the face of the box and Harry Kane smashes it into the bottom corner.

We could easily double out lead midway through the first half when the ball falls to James Tarkowski at a corner, but he blasts it at point-blank range into Oleg Shatov’s chest. Seven minutes before half-time a Russian set-piece goes awry, the ball falls to Kane and he charges up the field. Jamie Vardy charges with him and Kane puts him through one-on-one. Vardy doesn’t miss these, does he? Yeah, he misses these. Just past the post. 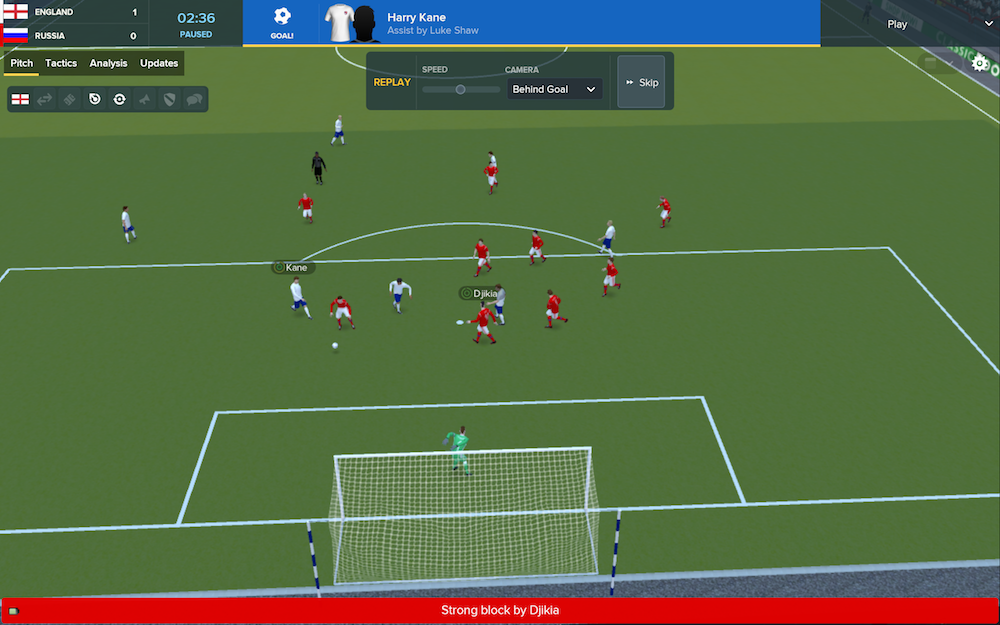 Just before half-time, Russia threaten. Schennikov gets down the left and tosses a dangerous looking cross into the box. Gary Cahill gets a head to it and flicks it out to the edge of the box. It could land at a Russian boot, but it doesn’t. Henderson gets there first and he wins the header, nodding it to Alli who heads it forward to Jonjo Shelvey, who volleys it first time out left to Shaw. It’s basically the Brazilian airport Nike advert, but inside our own half during a World Cup opener. I’ve never been so proud.

Shaw runs up the pitch and whacks a cross field ball out to Kyle Walker, who beats his man and knocks over a lovely cross for Vardy. If he hadn’t hit the crossbar, it would have been the best goal I’d ever seen on this accursed game. But he hits the crossbar.

Two clear-cut chances, two half-chances and one off the woodwork. But crucially, just a single-goal lead. What now? Do you change to a more defensive mode or do you continue to hit Russia on the counter yourself, all the while knowing that every attack leaves you vulnerable to a counter-counter attack, albeit while leaving open the possibility of a counter-counter-counter attack and so on and so forth. I tell the players I’m pleased with their performance and leave things well alone.

Ten minutes into the second half and I’m worried about Vardy. He’s booked for… well, for being Vardy. I replace him with Raheem Sterling who isn’t supposed to be much good up front, but did well in those friendlies and crucially isn’t Vardy. It may not be a strictly scientific way of doing things, but by thunder it works. Ten minutes after his introduction, Sterling beats two men, skips inside the penalty area and whips a shot in on goal that Igor Akinfeev can only parry. Walker is there to mop up. We have a cushion. The Russians fall apart. Yuri Gazinskiy comes on, leaps in two-footed on Kane and goes off again.

The full-backs work so hard in this formation that I change both of them and go to a defensive mentality. We still make and waste three clear-cut chances before the end. I feel sorry for the Russian manager, even if he’s just a short piece of machine code existing in human form only in my mind. I’ve been here. I’ve stood on the touchline and watched it all go to shit. It’s horrible. But there is a way through and I think we’ve found it. 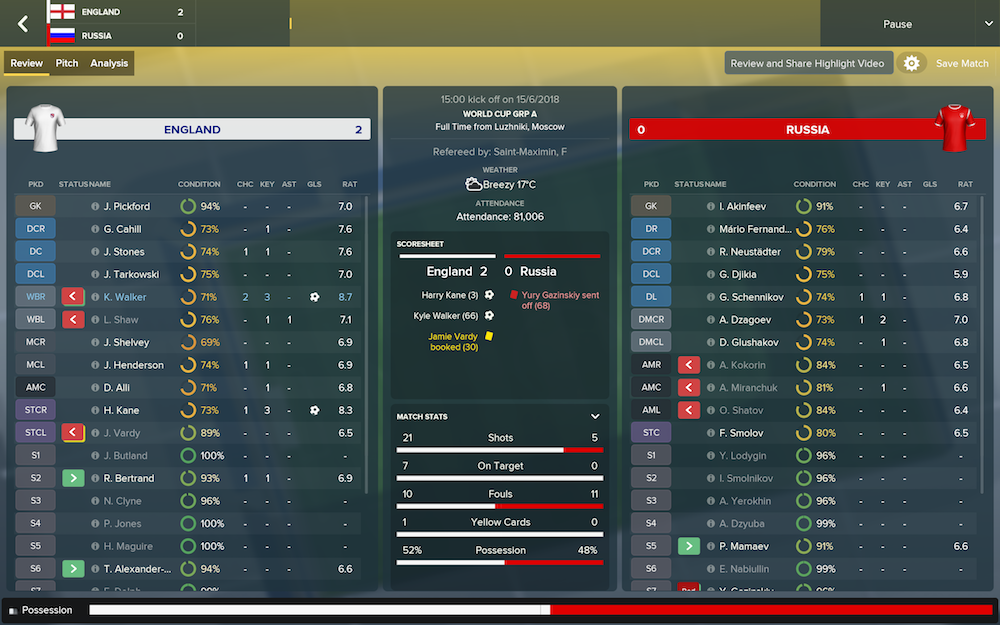 The full-time whistle blow and we take our place at the top of the group. Later that day, Mexico beat Japan thanks to a Javier Hernandez penalty. A win against them in five days and we might even be able to start thinking about the knockout stage.

But there’s plenty of time for that. For now, I’m just grateful that I’m not sat here in my pants, my face stained with tears and snot, wondering where it all went wrong. Again. 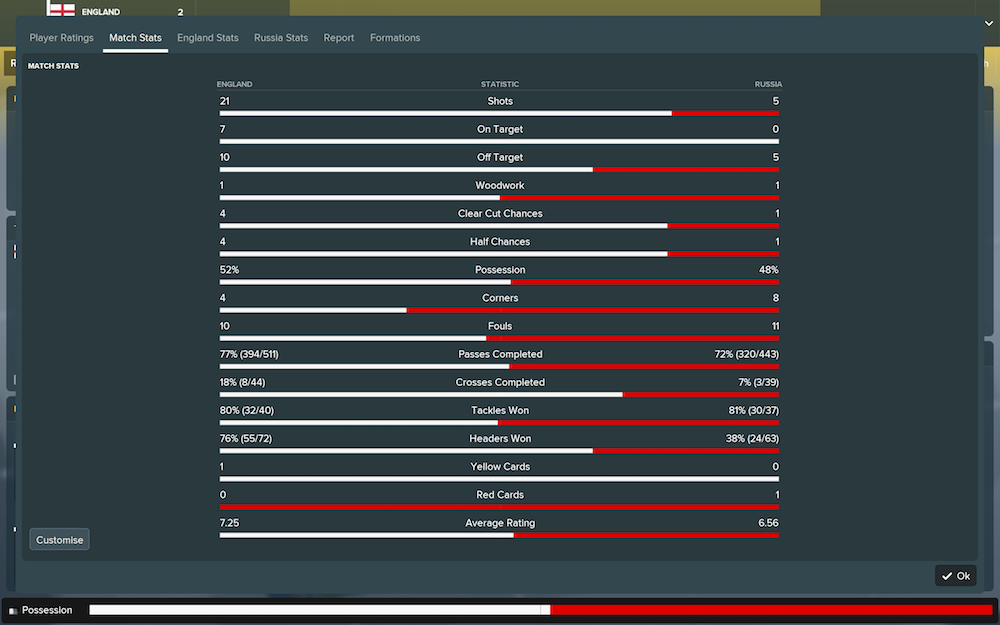