We are knackered. And I know why. It’s these tactics. Kyle Walker and Luke Shaw are shadows of themselves; they’re out of breath in line for the breakfast buffet. They do all the running down the flanks, dropping back to help the back three and getting up to supply the crosses. There’s no way they can play against Spain. But everyone is below par. This game plan is all about pressing and running and it’s taking its toll. With a heavy heart, I put in Ryan Bertrand and Nathaniel Clyne and resolve to keep a very close eye on everyone else.

I wanted to clarify a few things before the game: when I said after our defeat by Mexico that I would have these useless chancers shot for incompetence as a warning to others, I misspoke. I actually meant that I *wouldn’t* have them shot. So put that in there. That’s what I meant. I have great faith in these players. They love me. They really do. I’m very popular. Ask anyone.

I’m still a little surprised that we got past Italy, though. We never seem able to get every part of the team working at the same time. Jordan Pickford had that horror show against Japan. Dele Alli frequently goes missing. I’m still fairly convinced that Jonjo Shelvey is only in the team because I forgot he was there. But we seem to be getting results, so there seems little point in making too many changes. And also, it’s Spain. I hardly think the introduction of Jack Wilshere or Jamie Vardy or Fabian Delph is really going to make much of a difference. As my old gran used to say, “Kid, you can only piss with the cock you’ve got.” So, let’s piss. 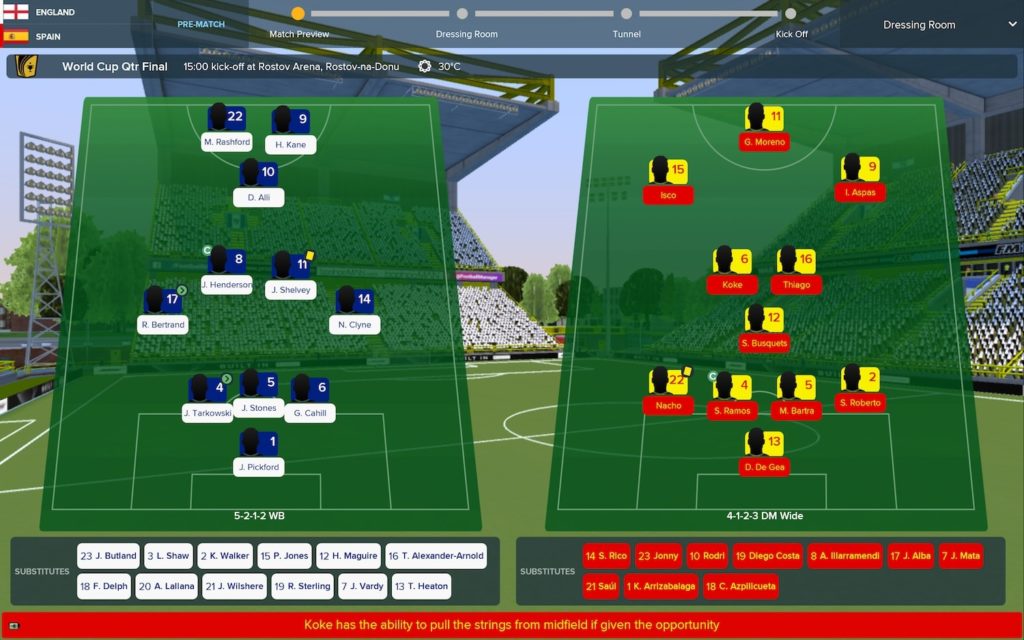 Something feels very wrong in the opening stages. I think it’s possession. I think it’s the fact that we haven’t touched the ball that’s worrying me. Although I also think we need to have a word with this lot about their positioning. There’s just a little bit of bunching in the middle and it’s leaving a smidgen of space in the central areas that Spain could exploit. 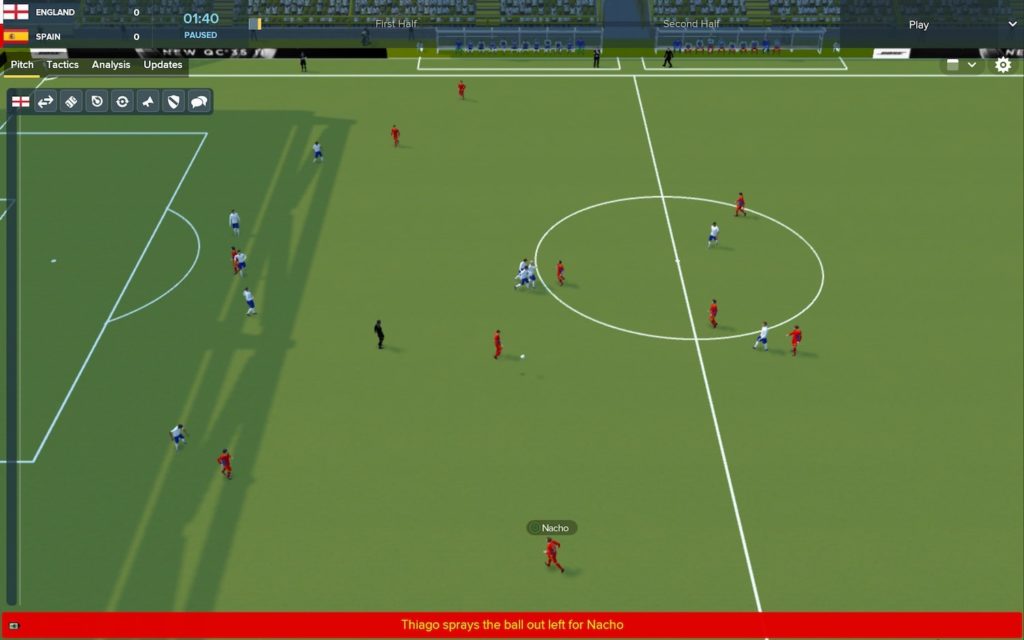 After 15 minutes, I’m still fairly sure we’ve only touched the ball for the kick-off. Spain just seem to be pinging it about for fun. They’re making chances, but not particularly good ones. The back three of James Tarkowski, John Stones and Gary Cahill looks pretty solid. Another 15 minutes pass without incident. 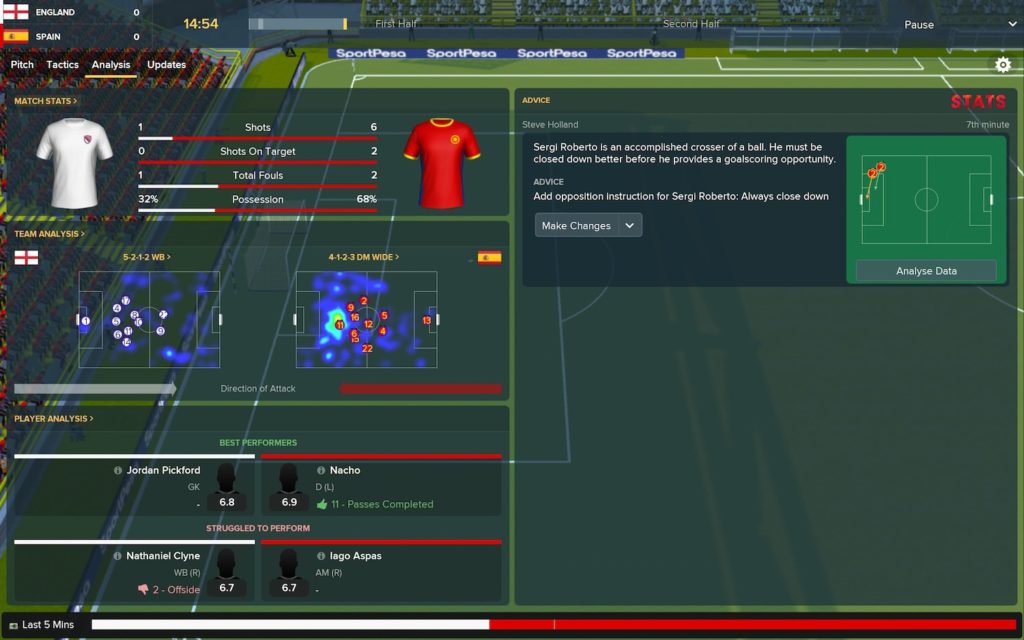 And then we have incidents. In a rare moment of coherence, we pick up the ball and advance into the unfamiliar territory of the Spanish half. Jordan Henderson notices that Bertrand has found bags of space on the left and clips a smart pass through a crowd which finds the Southampton man completely clear. I stare in amazement as he rifles the ball past David de Gea, who looks as surprised by this eventuality as everyone else. We’re 1-0 up. 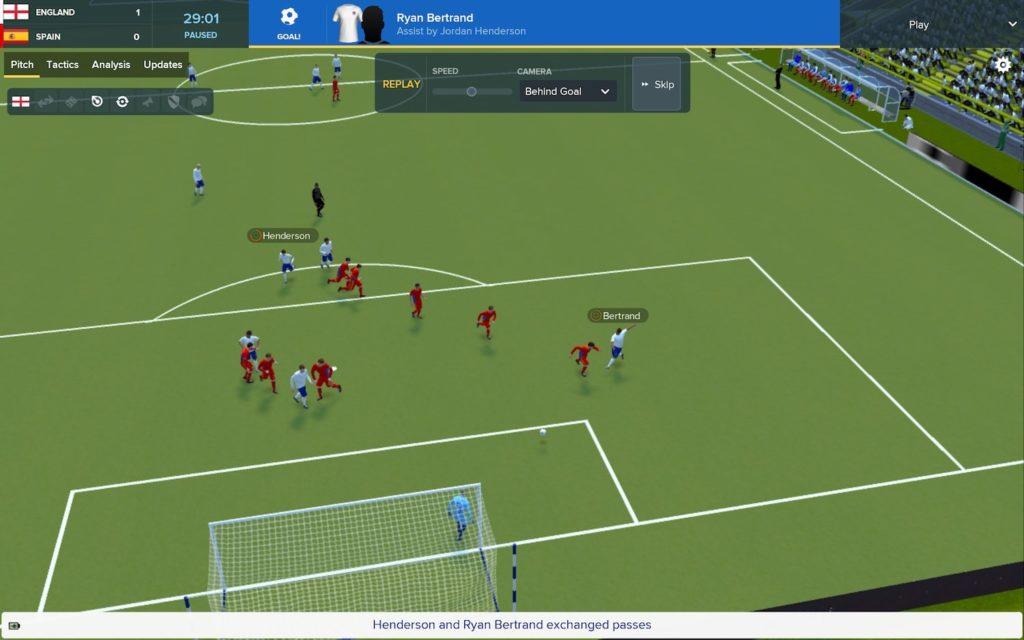 The Spanish respond in typical fashion: by linking together a 328-pass move that ends when Isco gives the ball away to Tarkowski. Our understated defensive lynchpin wellies it into the sky and somehow puts Harry Kane away in the Spanish half. With Marcus Rashford racing into the centre, it’s two against two, except it isn’t because both Spanish defenders try to close down Kane and so Rashford is left alone to smash home the second from close range. It’s 2-0. I lift up the laptop and examine it for signs of witchcraft. 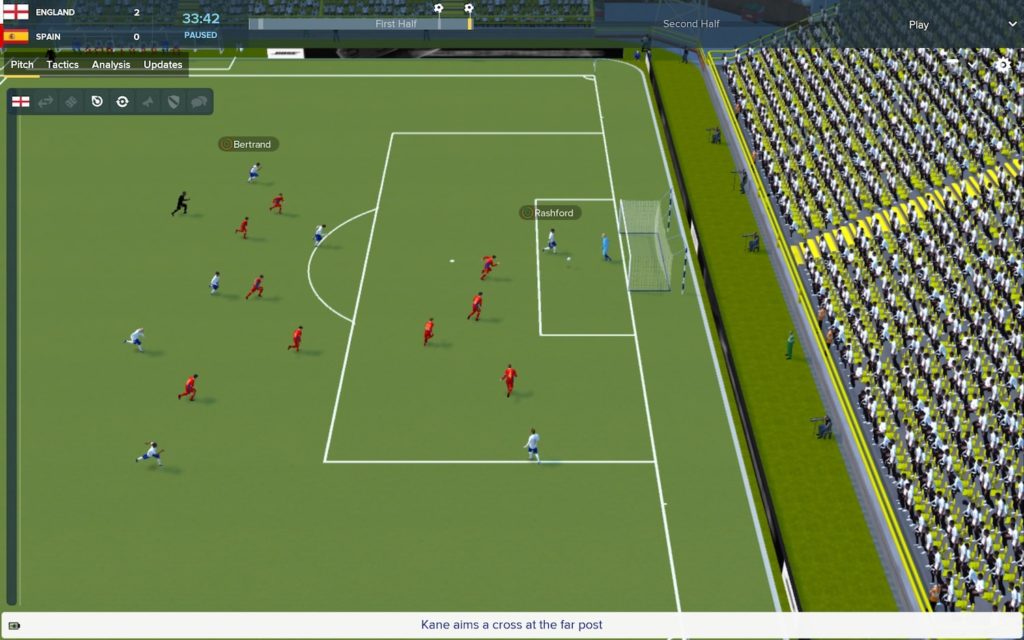 There’s not much I can do at half-time except ask them to keep going and not allow their performance levels to drop. Then we’re right back into them again. Five minutes into the second half, Kane finds Rashford with a cross and the youngster heads the ball off the crossbar. It should be 3-0. What on earth is going on?

And then Diego Costa arrives. I don’t know why Diego Costa didn’t start, to be quite honest with you. He appears to feel the same way, making a point to his manager by cutting in from the left and flicking the ball to Koke, who finds Iago Aspas at the back of the six-yard box. Bang. It’s 2-1 and I feel something slipping beneath my heart, as if all that’s good and pure in the universe is crumbling. 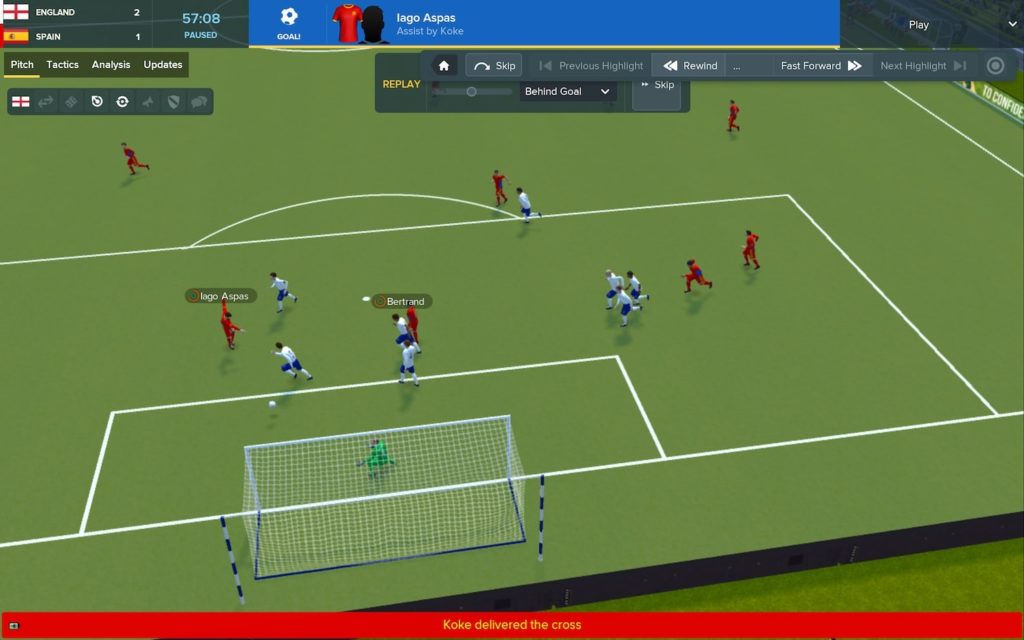 Shelvey is showing clear signs of fatigue in that he hasn’t nearly got himself sent off all afternoon, so I drop Alli back into his role and put Raheem Sterling in the No.10 slot. That ought to give them something to worry about. It doesn’t, of course. Because now Spain believe in themselves again. Now they’re attacking all the time and we don’t seem to be able to stop them. And when a cross is lofted into our box with 22 minutes to go, there’s an almost imperceptible pause and the referee’s whistle shrieks. He’s spotted some kind of push. Of course he has. Spain have a penalty. It’s Aspas again. And in this universe, Aspas never misses. 2-2. 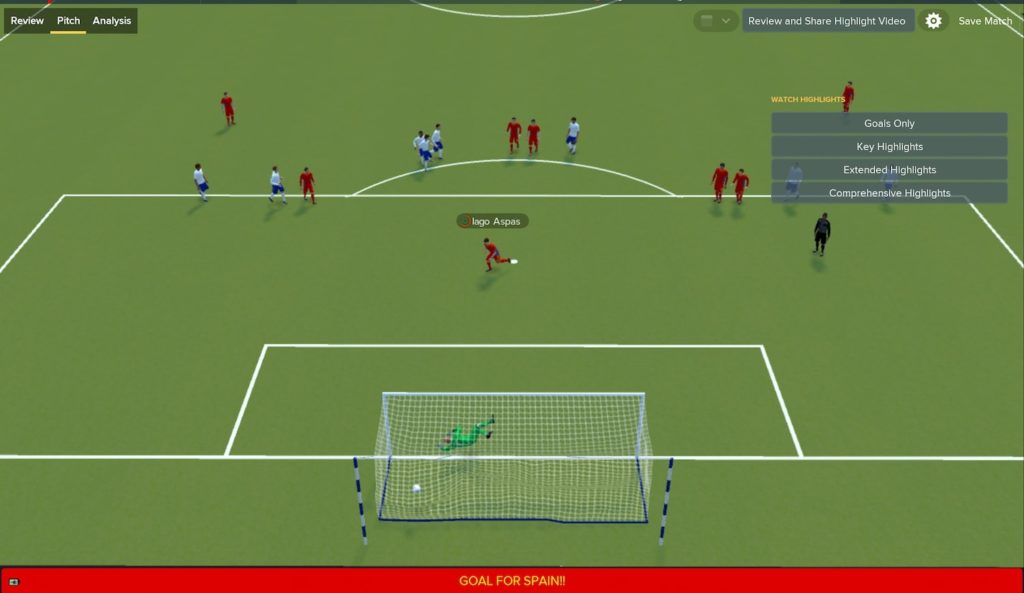 To make matters worse, Rashford pulls up with an injury. I put Sterling up front and drop Wilshere into the centre of the three, with the wing-backs becoming full-backs. We’ll be 5-3-2 for the rest of the game. That ought to stop those Spanish attacks. And it does. Nothing happens. The game goes quiet. The Spanish clearly believe that they can pass their way around our heavy legs in extra time. I have to say, I concur. And so with six minutes left, I put Adam Lallana on for Dele Alli and I switch… to overload.

In the last moments of the 90 minutes, Bertrand coaxes one last run out of his weary body. He trudges up the touchline, blowing hot steam out of his sweaty arse before grunting and swinging a cross into the box. It evades every Spanish head and finds its way to the feet of Kane. Harry Kane. England’s flaxen haired hero. The targetman. Our open-mouthed knight in shining armour. Everything stops. The universe puts down its cup of tea and says, “Oooh.” Kane takes a touch, lowers his head and… crashes the ball off the outside of the post. The fucking idiot.

That was it. That was the chance. You always get one chance and that was the one chance and he missed it. I reach out to the laptop and prepare to adjust our tactics for extra time. But De Gea’s goal kick is won by Lallana. He beats a man and plays the ball inside to Wilshere. Kane starts to accelerate, racing into the gap between Spain’s centre-backs. Wilshere reads his run, steadies himself and plays the most perfect pass I’ve ever seen in this life or any other. Kane brings it under control and unleashes a shot that no goalkeeper could ever stop. It’s 3-2. It’s 3-2. It’s 3-2. We’re in the semi-finals. 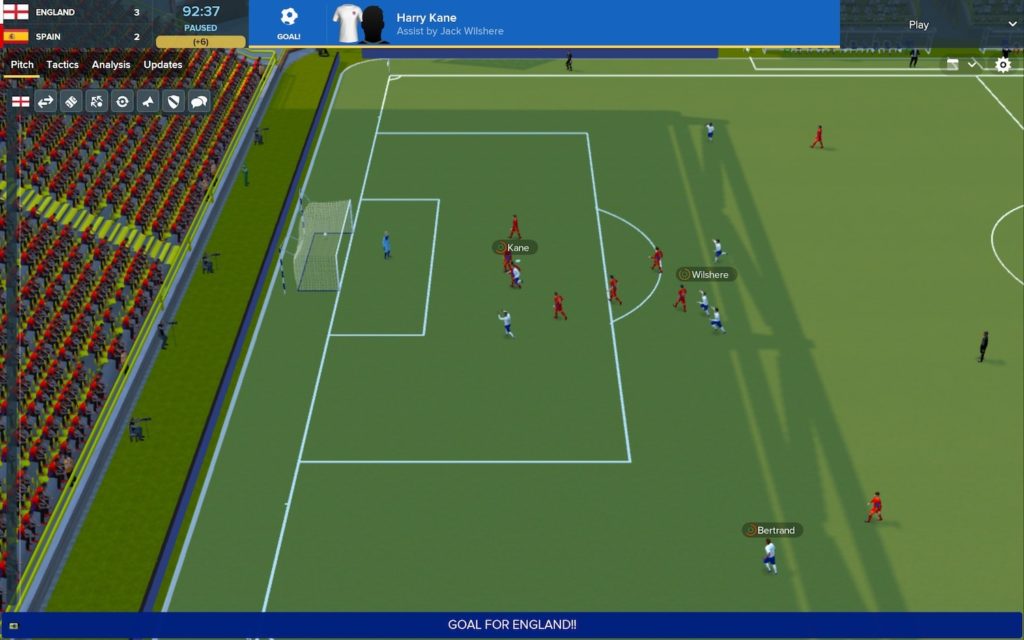 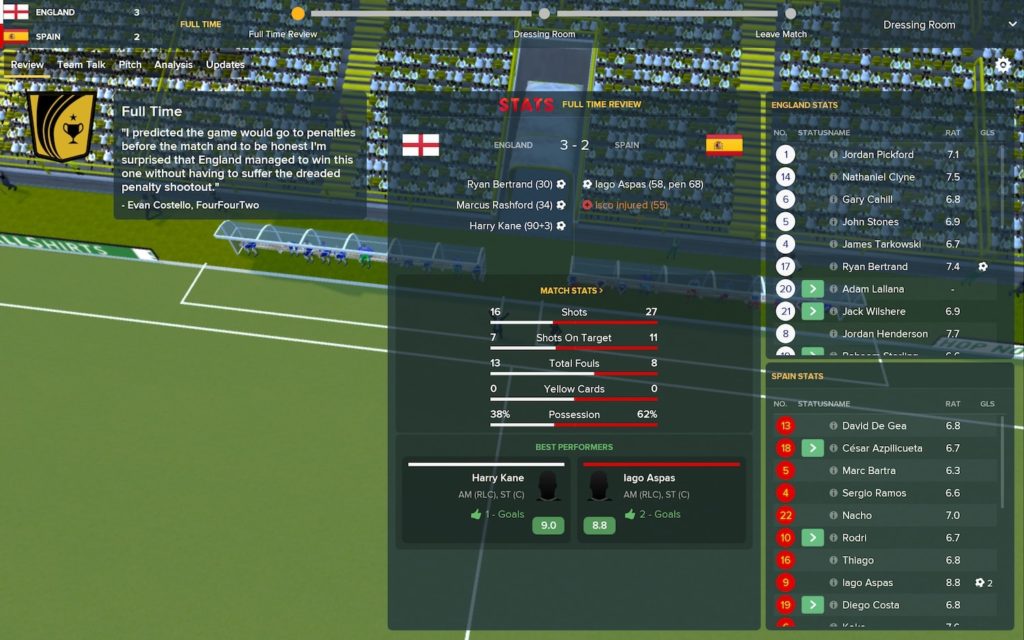 I’m not sure we deserve to be in the semi-finals. The tone of the reporting suggests that we don’t. But somehow we’ve pulled ourselves up from being bullied by Zambia at Wembley to beating Italy and Spain on the way to the last four in the World Cup. The only thing that stands between us and a first World Cup Final since 1966 is France. Which is a shame, because they’re quite good. 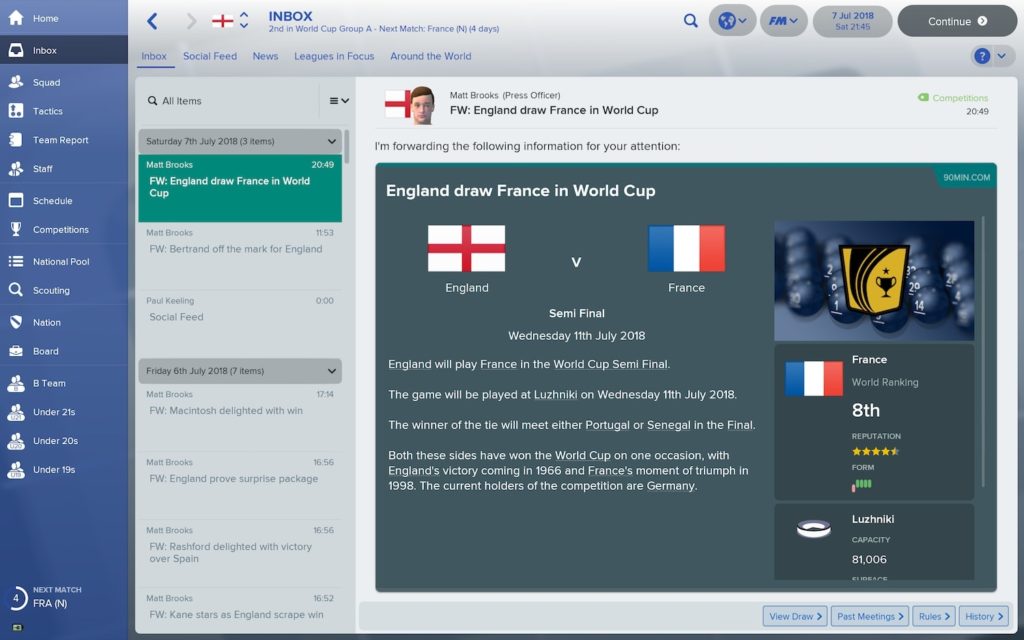