We were 60 seconds away from putting one foot in the next round. Sixty seconds away from sitting happily at the top of the group with four points in the bag and the prospect of qualifying even if we slipped up against Japan in the last game. And then Mexico scored and we were right back in the brown stuff.

Fortunately, Japan and Russia played their second game the day after the Mexico debacle, so I was able to go along and have a look. And I was very glad I did. Japan are absolutely terrible at defending crosses. They lose 4-2 to Russia and every single goal is from a cross, every single one of them. They just don’t know what to do at all. And so I change my tactics a little. 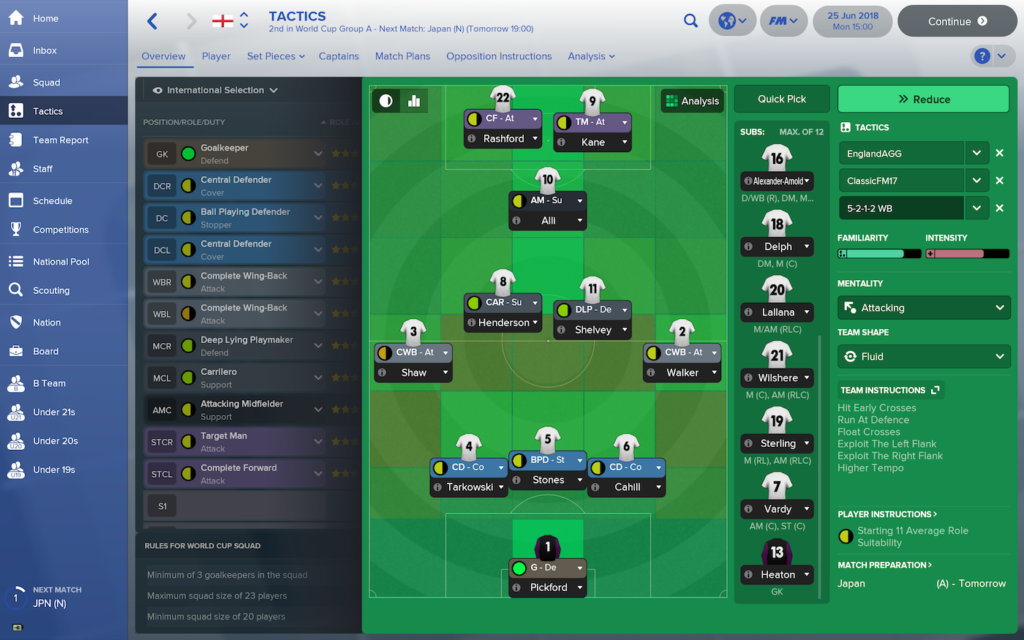 For this one, I’ll go with Marcus Rashford ahead of Jamie Vardy. He’s not exactly a targetman, but he is reasonably tall and that might be enough against this lot. We’ll go for early, floaty crosses. I want to crack into them early and make them capitulate, so I’ll switch it up to attacking too. And I take personal charge of the briefing, reminding the players about the crosses, and specifically their floatiness. Crosses. Floaty. Floaty. Crosses. Got that?

Our situation is complicated a little by Russia’s win. If Russia beat Mexico, then a win might not be enough for me here, as we’ll all be on six points. So not only do I have to win, but I may have to win big. Crosses. Floaty, floaty crosses. 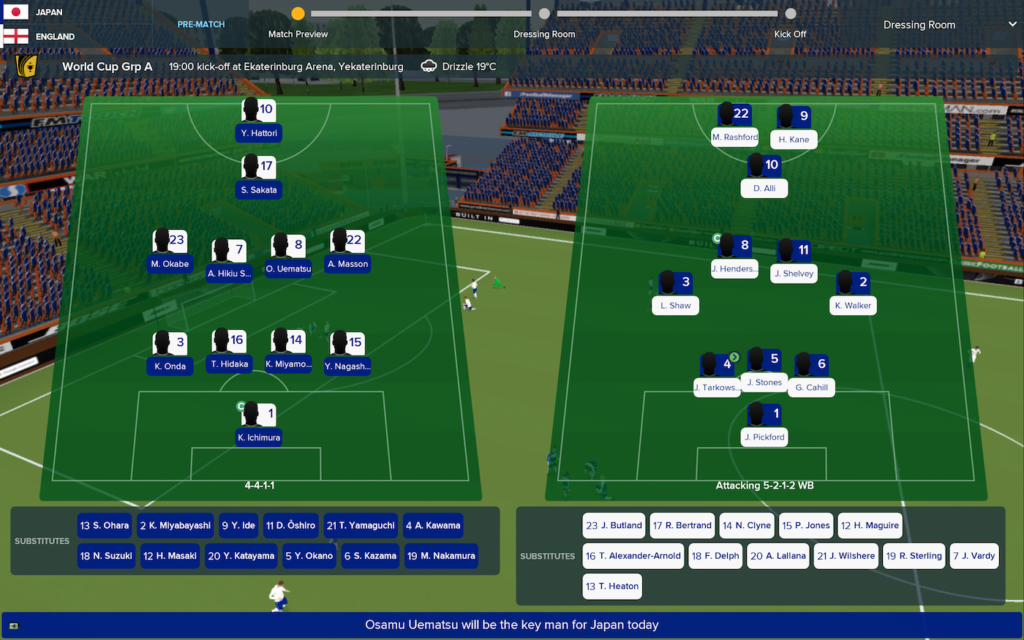 Two minutes into the game, Manabu Okabe floats a cross into my box. Jordan Pickford, like a child chasing a lost balloon, scampers out with his arms in the air and misses it by miles. The ball falls at the feet of Tomoya Hidaka, who cheerfully taps into the empty net. 0-1. Not the best start, but a it’s a freak accident and something we’ve got 88 minutes to fix. 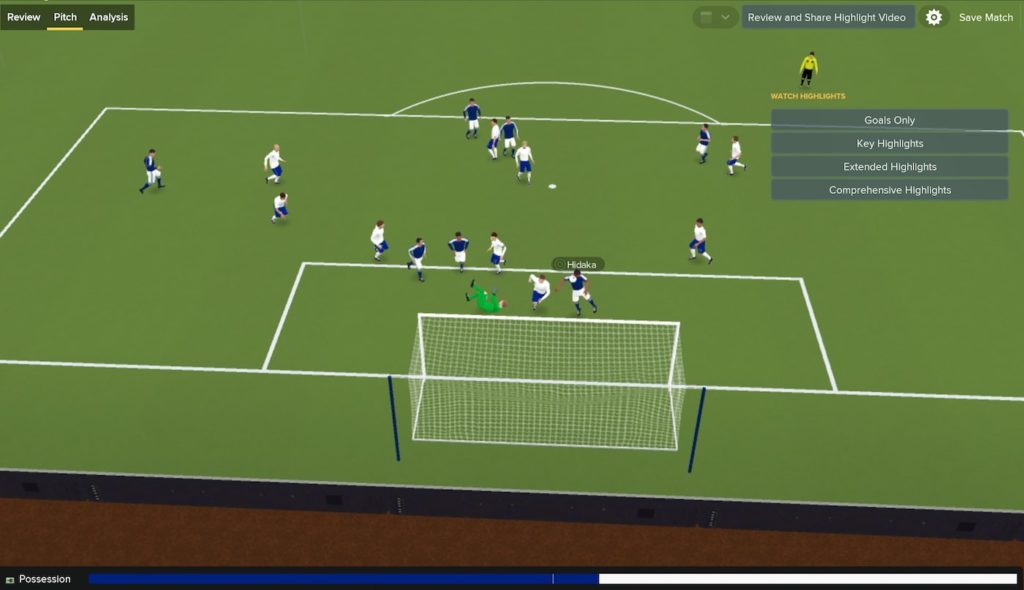 After 10 minutes, Akira Masson scampers down our right wing, but he makes a poor connection and scuffs the ball slowly along the ground. Pickford steps forward and crouches down. The ball bounces off his arm into the path of Yuki Hatturi, who smashes it past Pickford’s swiftly reddening ears. 0-2. I don’t know what to do. And so I do nothing. I just stare at the screen in horror. Apparently Mexico are beating Russia, but I don’t think that matters for me any more.

The clock rolls around to the 25th minute and there isn’t a single highlight. Not one. We’re attacking, we are the cream of the Premier League set to attack and we haven’t made a single chance. I want to cry. But I don’t cry. I go to overload, I haul off John Stones for no particular reason and I reinforce the midfield with Jack Wilshere. Maybe we can regain control of the game if we pack the centre. With seven minutes to go before the break, James Tarkowski rises above the defence for our first floaty cross of the day. He heads it over. Of course he does.

With two minutes to go before I can scream vomit-flecked, eardrum-shattering abuse at them all for the entirety of the half-time break, Japan toss in another cross and Pickford fucking well drops that one too, the useless fucking twat. This fucking game. This fucking, fucking game. It’s not a fucking game. Games are fun, this fucking thing is about as fun as passing fucking kidney stones. And I do it to myself. I do it to myself. This whole fucking series is just me eating small, pointy pebbles and then fire-jizzing them through a crescendo of unimaginable pain at a disgusted looking doctor. I fucking hate it. I fucking hate me.

After the break, we seem a little sharper. Marcus Rashford peels off to the left, lifts a cross into the box and Dele Alli smashes into the back of the net from close range. 1-2. That’s a little better. 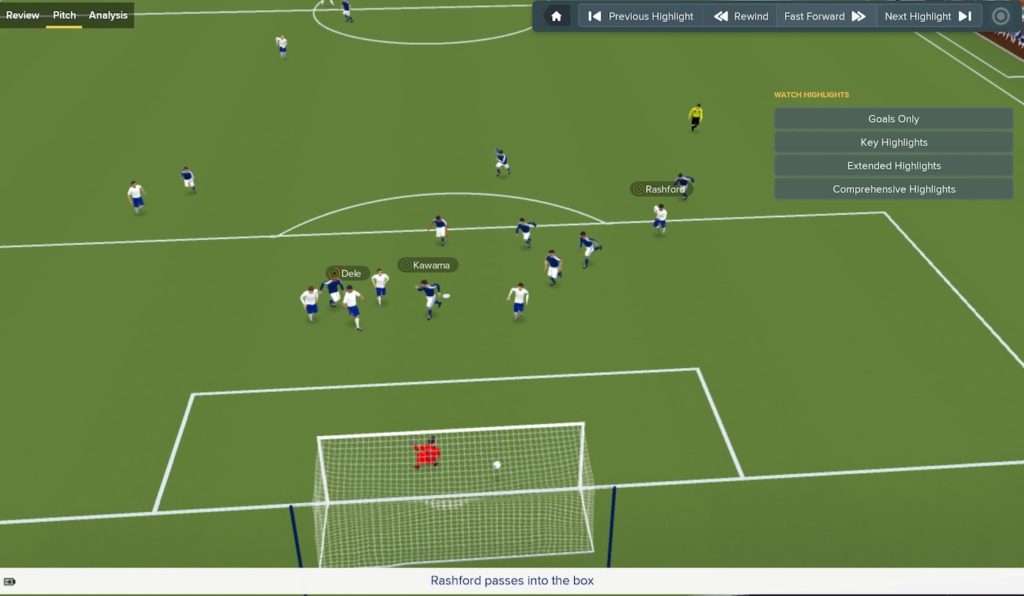 It’s not enough, though, and after 10 minutes, I mix it up again. Adam Lallana comes on for Jonjo Shelvey, but goes out onto the right as an advanced playmaker. Dele Alli becomes a shadow striker and we’re something a little closer to a 4-2-4, albeit a very lob-sided one. Five minutes later, Jordan Henderson rises to meet a cross, only to see it scrambled off the line. A minute after that, Alli gets above everyone and smashes his header just over the bar. We’re getting there. We’re getting there. And we get there. Luke Shaw breaks down the left and floats one in, by God they’ve got it, Alli gets a touch and Lallana is there to finish. 2-2. 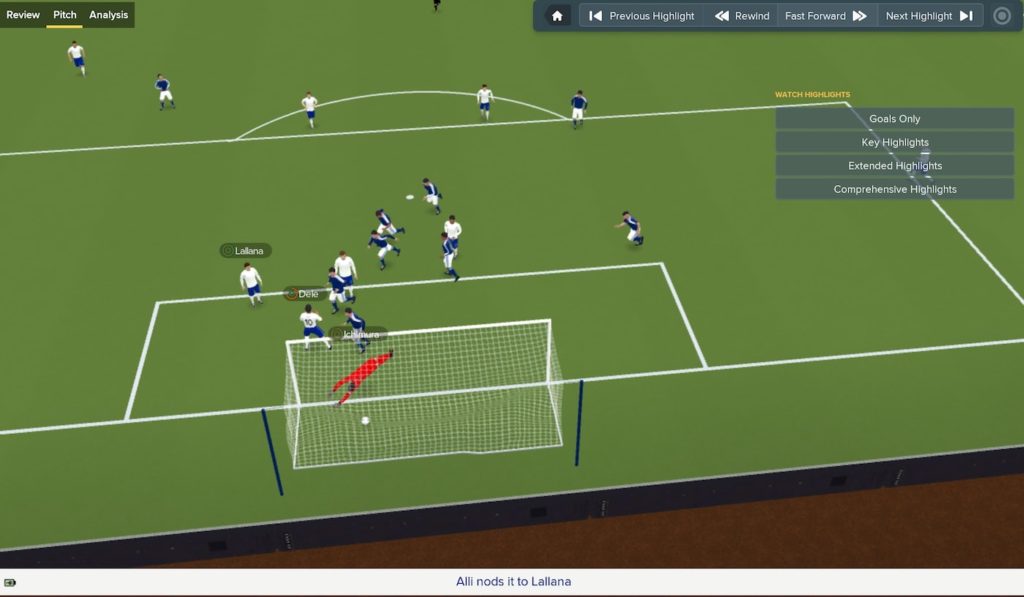 Russia are still losing, we’re back up to second and there are 25 minutes left, but this is no time to close the game down. I keep them on overload, I keep to 4-2-4 and it pays immediate dividends. Within 60 seconds of the equaliser, comes the goal that puts us in the lead for the first time.

This time it’s Kane who’s peeled off wide, it’s his high cross and it’s Rashford’s deft header and oh my God, it’s 3-2 and all three goals are from crosses and one is from my fresh starter, one is from my sub and one is from a man whose position I changed midway through the game and my actions are bringing reactions and I have successfully assessed my weaknesses and reacted accordingly and I’m winning, I’m actually winning and I feel vindicated now, not just within the narrow confines of this virtual experience, but on a spiritual level. I have passed through the flames and I have not been found wanting. I am reborn. I am reborn. I am reborn. 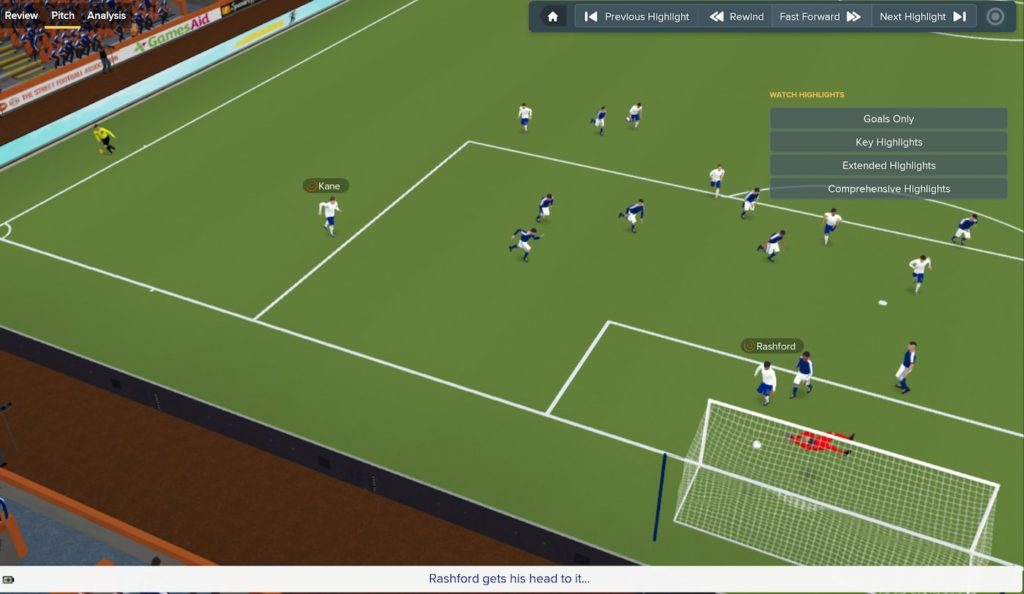 I switch to 4-5-1 and defensive mode because I’m not a complete fucking idiot. We get a fourth in in injury time and it’s all over. Looking at the stats, we seem to have bossed the game. Looking at the stats, it looks like we should have scored six or seven. But I’ll just take the three points. We’re through to the next round. And Italy are waiting for us. 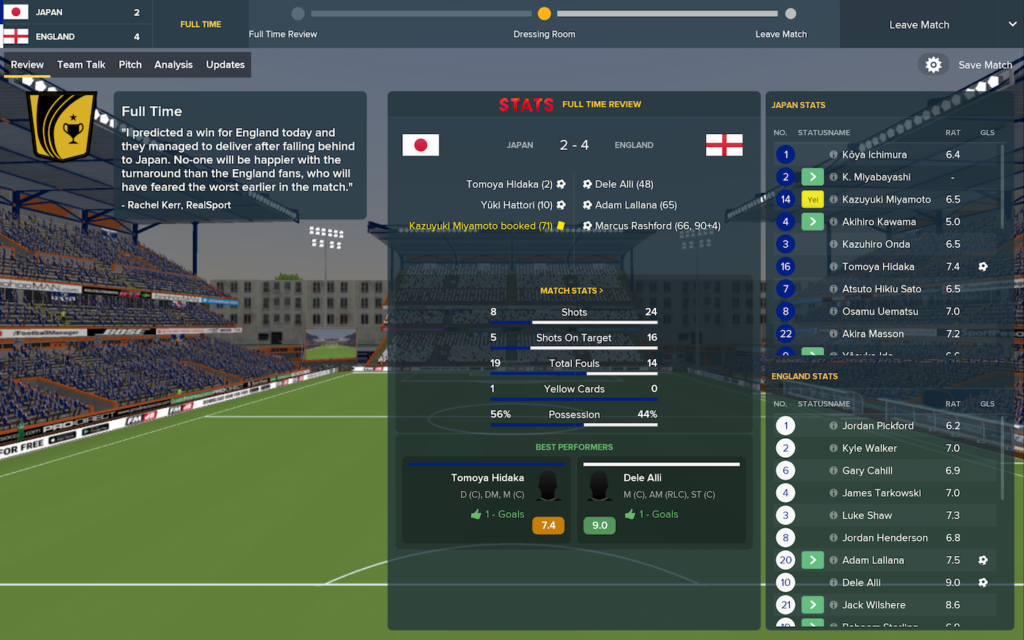