We’ve won a game! A proper game! And I’d like another one, please. I’m really rather keen to book our place in the next round as soon as possible. Sadly, our group doesn’t have any easy fixtures. In fact, I have a horrible feeling that everyone else has earmarked *us* as the easy fixture. But with that morale boosting victory over Russia under our belts, we have no reason to fear Mexico.

I’m still not taking any chances, though. I watch the highlights of their 1-0 win over Japan and make a careful note of their set-pieces. And I’m very glad that I did. For some reason Señor Osorio chooses to put all of his big lads at the near post and leave the far post marshalled by Galito Vazquez. He’s 5ft 5in, which we now know is shorter than both Mel and Sue. 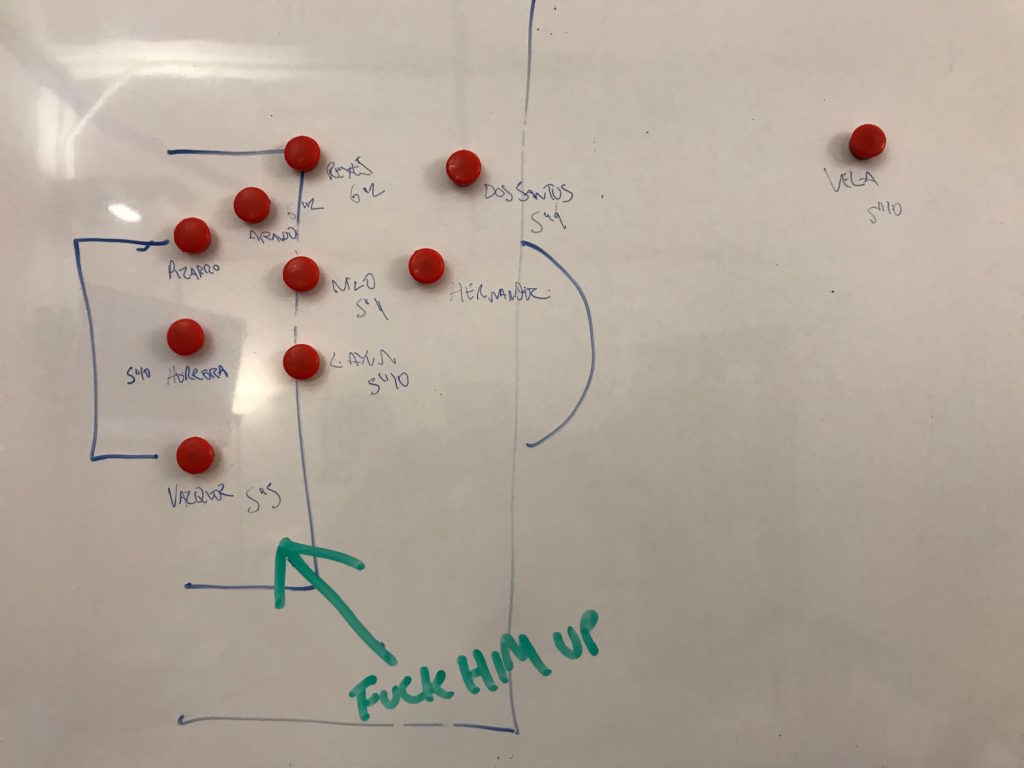 And so we’ll be smashing everything to the back stick where Gary Cahill and Harry Kane will be waiting, looming over Vazquez and bullying him. To aid their progress, I’ve put dangerous players at the near post and another to come short which should hopefully distract some Mexican markers and free up a bit of a space. However, they are very quick and very skilful, so it’s important to be cautious and not leave the gaps for them to exploit. 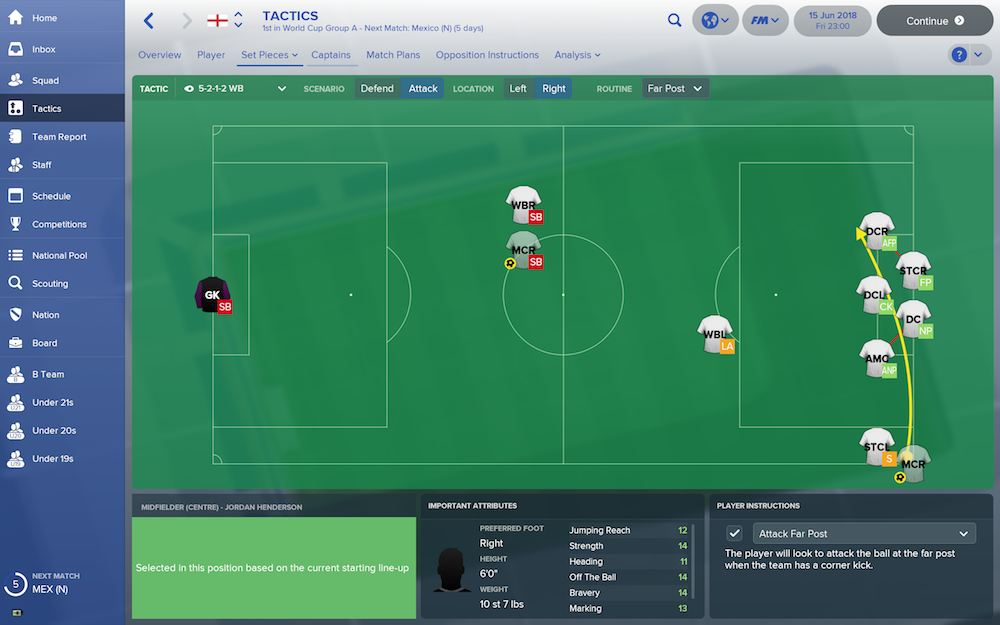 Mexico, however, have a few surprises of their own in store. They come out in a deep 4-5-1 formation that will make it very difficult to get at them down the flanks. They’re giving us far too much respect. Maybe they didn’t see that time Zambia nearly turned us over. It doesn’t seem to work, though. Three minutes in, Harry Kane puts Jamie Vardy through one-on-one but his shot is tipped around the post. No matter. Time to see how this far post corner routine works out. Jonjo Shelvey strolls over, puts the ball on the ground… and drives it low into the near post. I see.

Midway through the first half, disaster strikers. Kyle Walker, of all people, is guilty of a clumsy challenge on Javier Hernandez and the referee, without even referring to VAR, awards Mexico a spot-kick. Hernandez gets up, dusts himself down and twats it straight at Jordan Pickford. A lucky escape. 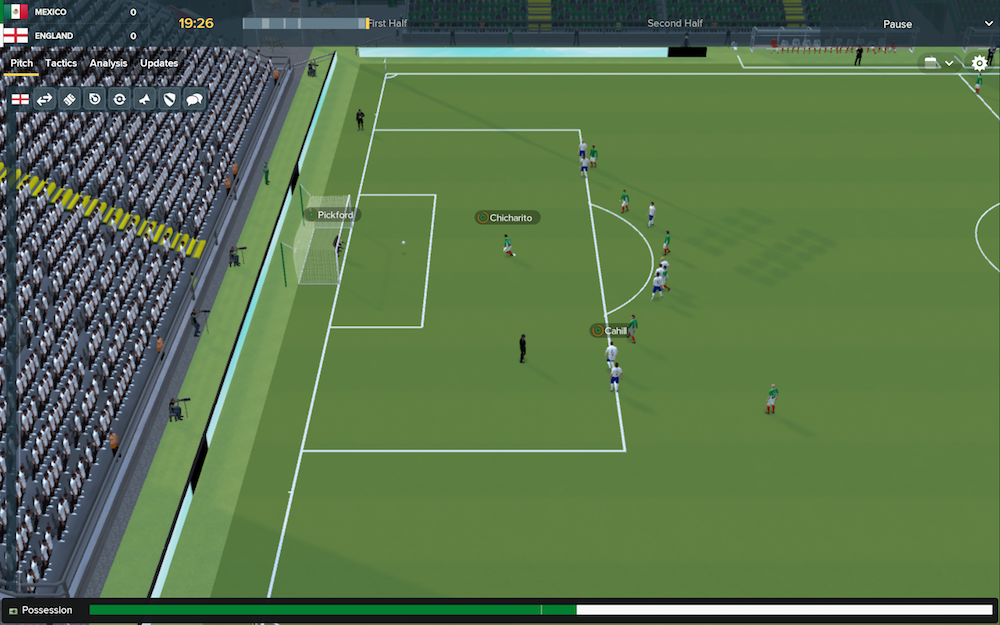 But instead of waking us up, it seems to inspire Osorio’s men. For the rest of the half, we barely get a kick. We keep them at bay with little difficulty, their shots are almost exclusively from 30 yards or more, but it’s a bit disconcerting. I let them know this at half-time through the medium of screaming abuse from close range. But it makes no difference. We’re not even getting corners, so there’s no time for Shelvey to redeem himself. He and Vardy pay the price for their incompetence seven minutes after the break and I introduce Raheem Sterling and Jack Wilshere to the fray. Staggeringly, this fails to turn the tide.

However, I am starting to see what’s going wrong. Mexico are dominating the midfield and we have two strikers adrift and starved of possession. I use Sterling as a false nine, turn the triangle of midfielders so that Jordan Henderson sits deeper and Dele Alli tries to punch through their lines. Finally, we start to see a bit more of the ball. Sterling fluffs his lines in front of goal, Kane powers two headers straight over the bar. I use Trent Alexander-Arnold’s fresh legs to try to open them up on the right.

And then five minutes from time I think, ‘time to shut it down.’ We’ve been shit, they’ve been shit, let’s take the point. The last thing we need is to go chasing a win we don’t deserve and then getting caught on the break. I switch them to ‘defensive’ mode which means, I am told, simply that the team will no longer take risks. It’s not a total ‘fall back and defend deep’ option. That’s ‘contain’. Defensive mode is simply a more cautious mode of play. It’s sensible. It’s shrewd.

And that’s why I’m rather surprised to see Henderson titting about with the ball so deep into injury time. He eschews three easy chances to pass the ball away safely and instead turns ever decreasing circles on the right side of our penalty area as Mexicans gather around him like sharks. Obviously they dispossess him and obviously he chases after them to try to redeem himself and obviously he hacks one of them down and obviously it’s a penalty and obviously Miguel Layun slots it home and obviously this game can go and fuck itself. 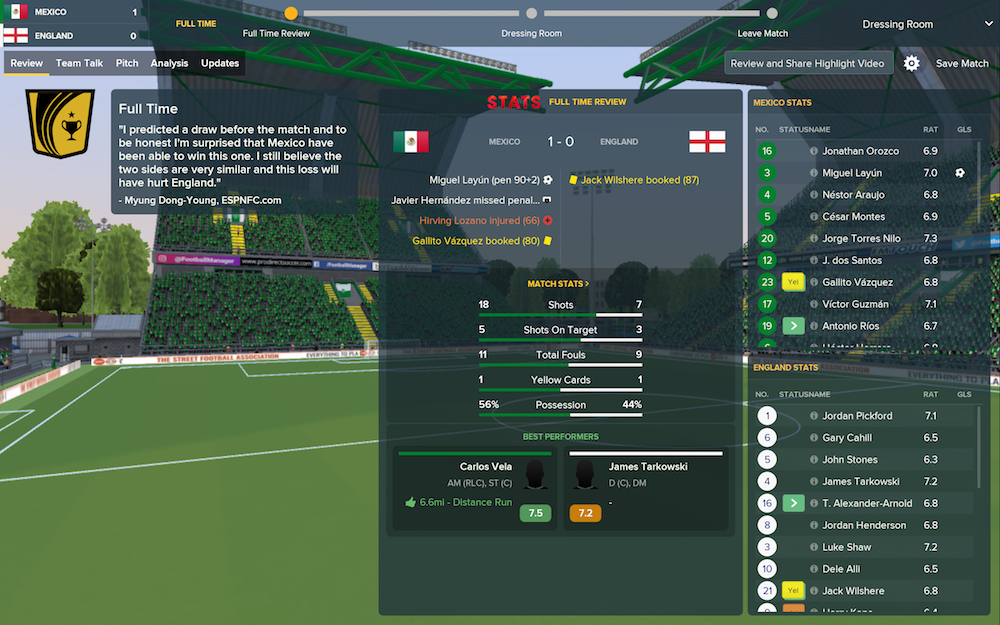