IAIN: And so it is to Europe that our thoughts must turn. There can be no time for sadness, there can be no room for resentment. We have to accept our disappointing Old Firm performance and move on.

A point is no disaster, though it does mean that the gap we had opened up between ourselves and our rivals has suddenly contracted. But there is a long way to go yet. It should be enough that we stand on the brink of history, albeit very recent history. For if everything falls into place tonight, we can be the first Celtic side to reach the knock-out stages of the Champions League in four seasons. All we need to do is beat Basel in Switzerland and then hope that Atletico Madrid take care of CSKA Moscow in Spain. Is that too much to ask?

There’s just one minor problem. Craig Gordon is my first choice goalkeeper and he is injured. Dorius de Vries is my second choice, but he’s only just returned from injury and is down at 52% match sharpness, which essentially means he’ll need help remembering which way round his gloves go on. Logan Bailly, who played against Rangers, is cup-tied because I had a big squad and I didn’t want to drop any outfield players before I’d seen what they were like and I’m sorry, okay? Step forward, 18-year-old Ross Doohan. No pressure, son. 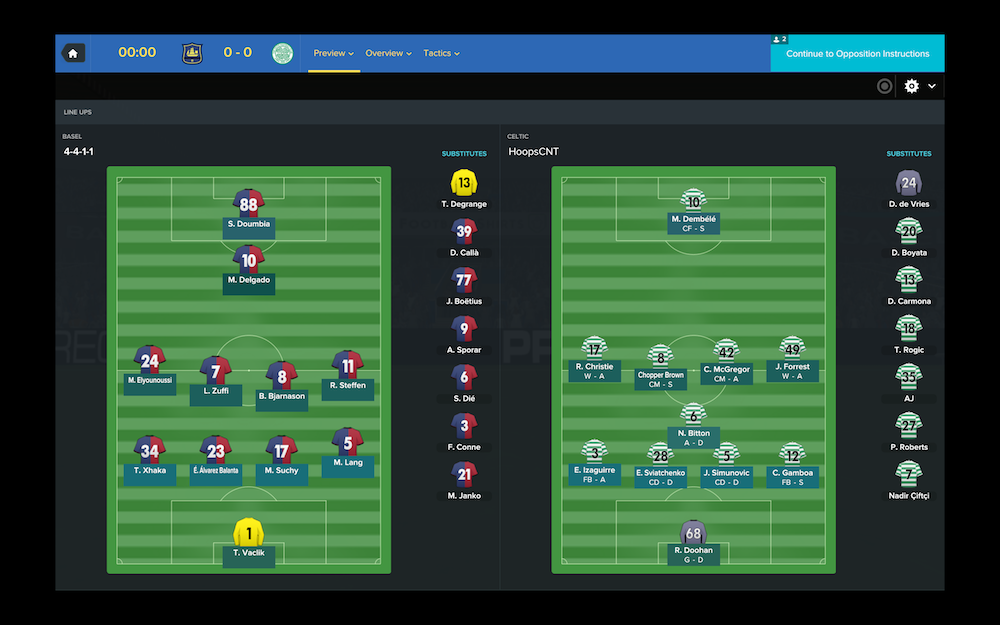 It is at times like this that I am reminded of the words of Napoleon Bonaparte, stood forlornly upon the broken, smouldering fields of Waterloo. “Bugger,” he said. “We nearly fucking had that.”

Our part of the deal is upheld with little difficulty. Basel, for all the problems they cause the English every year, really are rubbish. We take a commanding three goal lead quickly but it’s not long before news comes in from Spain. And it’s not good. With CSKA winning, we are bound for the Europa League. But then we hear that Atletico have equalised. It’s at this moment that Basel make an irritating grasp for freedom, ruining Doohan’s clean sheet. And then Chopper Brown, after months of good behaviour, is sent off for the fourth time this season. It’s not even Christmas.

We swipe Basel down with a fourth goal, a devastating riposte to their impetuosity. And then Atletico win a penalty. There are only 16 minutes left. If they score this, we’re going in the hat for the last 16. You can diminish my BetF….BetBright Cup, you can diminish my lead in the Scottish Premiership, but you cannot say anything that would diminish a place in the knock-out stages of the Champions League.

Atletico miss the penalty and I go for a very long walk. 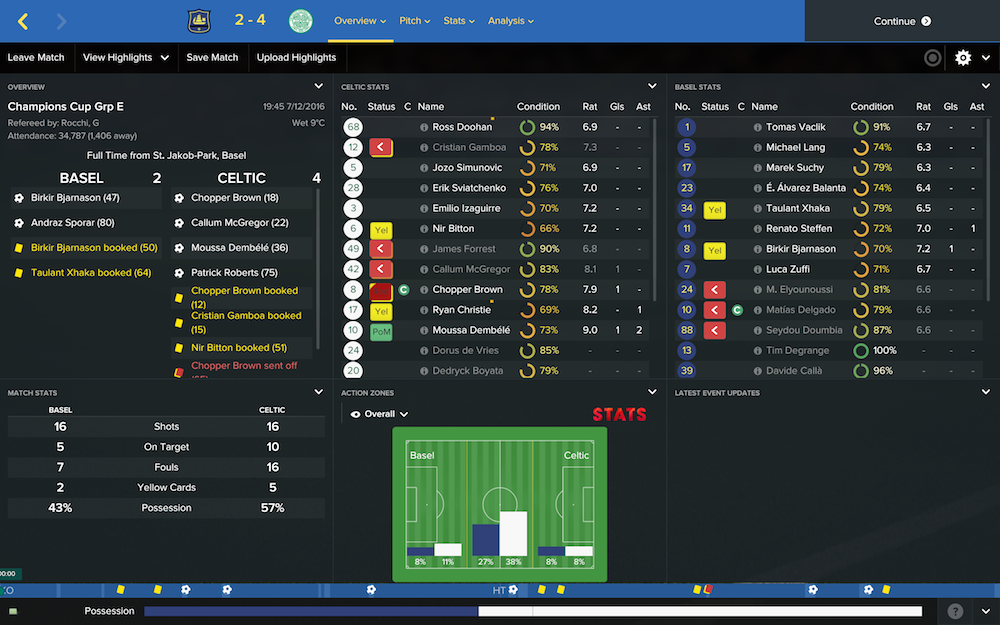 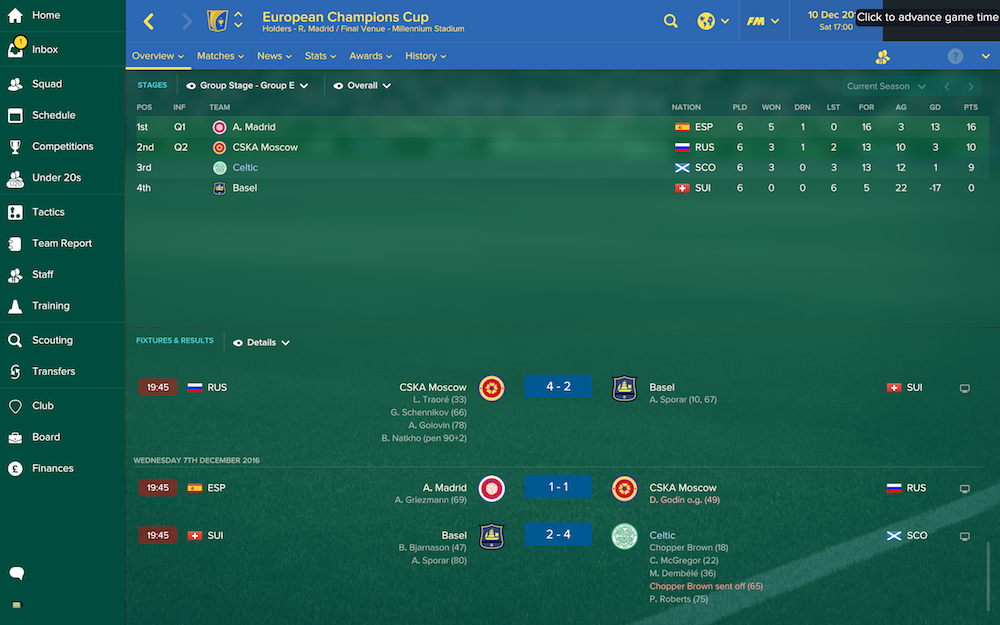 ALEX: A point at Parkhead, however earned, is cause for celebration. But despite the draw against our Glasgow rivals, our form is still littered with too many red dots and not enough greens.

We might just about be in the hunt for European football, but the Board’s start of season expectations – that we win the Premiership – are a leaden weight. On the bright side, the squad’s mentality seems to have been energised by the result against Iain and the formation seems to be working ok. We are creating quite a lot of chances, but our failure to score is leaving us vulnerable, as is our openness to counter-attacks at pace.

Next up, we host Kilmarnock at home, in what should be a straightforward game. I stick with the 4-4-2, and name my strongest line-up once again, with Macheda back in for Crooks as we go with two strikers. Foderingham, who has done well since replacing McCrorie, retains his place in goal. Kilmarnock start with a 4-1-4-1, much like Iain’s Celtic, and will doubtless look to hit us on the break, a tactic that the smaller sides up north seem to do well. 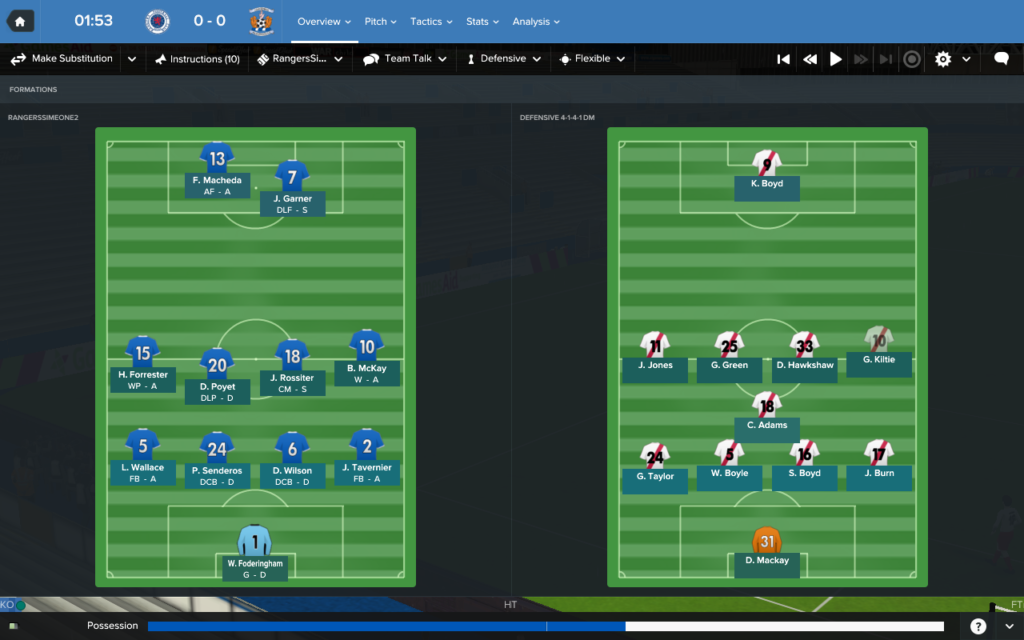 I give up. I literally give up. Fourteen shots and five on target, to their five and three on target. Two clear cut chances to their one. 51% possession and 82% passing accuracy. And still we fucking lose 2-0 at home. I can’t explain it.

They hit us twice on the break, exactly as predicted, and yet my centre-backs seem unable to track late runs into the box. Foderingham has no chance with the goals, and any attacks we do have are snuffed out by Burn and Boyle in the Killie defence. Greg Kiltie turns in a superb performance out wide for the visitors, and Kris Boyd bags both their goals. After a while, I just sit there with my head in my hands. This is how it feels to be powerless. It’s a devastating loss and I am utterly bereft.

There’s nothing worse than losing when you’ve played well and been hit by sucker punches. For once, there’s no triumphalism from Iain either, just a weary shake of the head. He’s been here before and he knows how unforgiving this game can be. 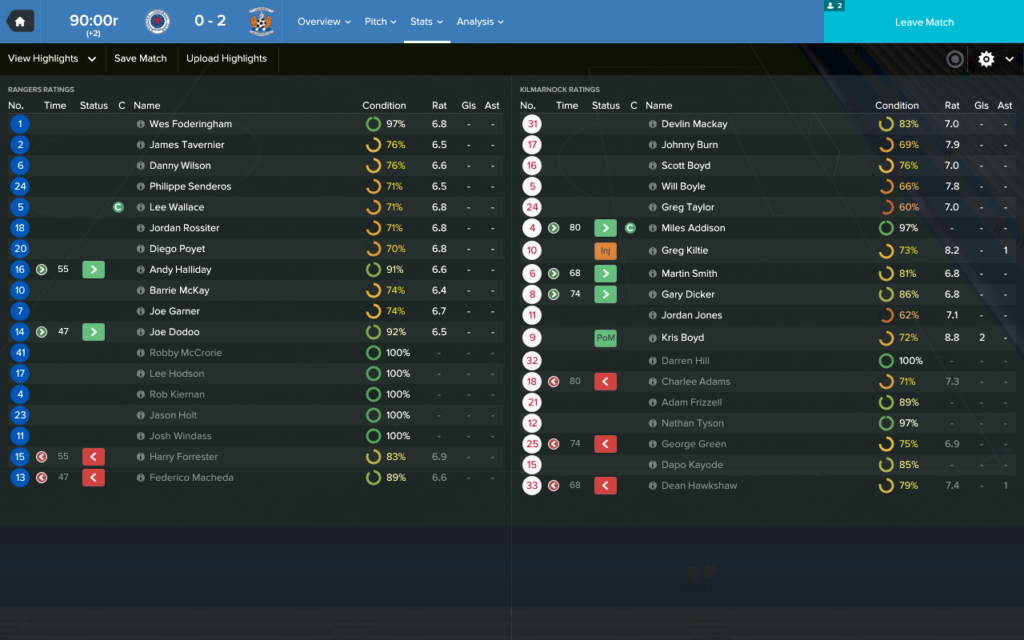 It’s no great surprise when the Board summon me for a crisis meeting. We’ve lost three of our last five home games, the dressing room is disillusioned, and I scrape and plead a month’s grace to turn things around.

I’m granted that much, but if I can’t get some wins under my belt, then I’ll be packing my bags, stowing the laptop, and leaving Rangers for good. It’s an unthinkable result for a manager who has never, ever been sacked in any version of the game. I have some ideas of how to get the ship back on course and I can only hope that they work. If not, will the last person out of Ibrox please turn off the air-conditioning? 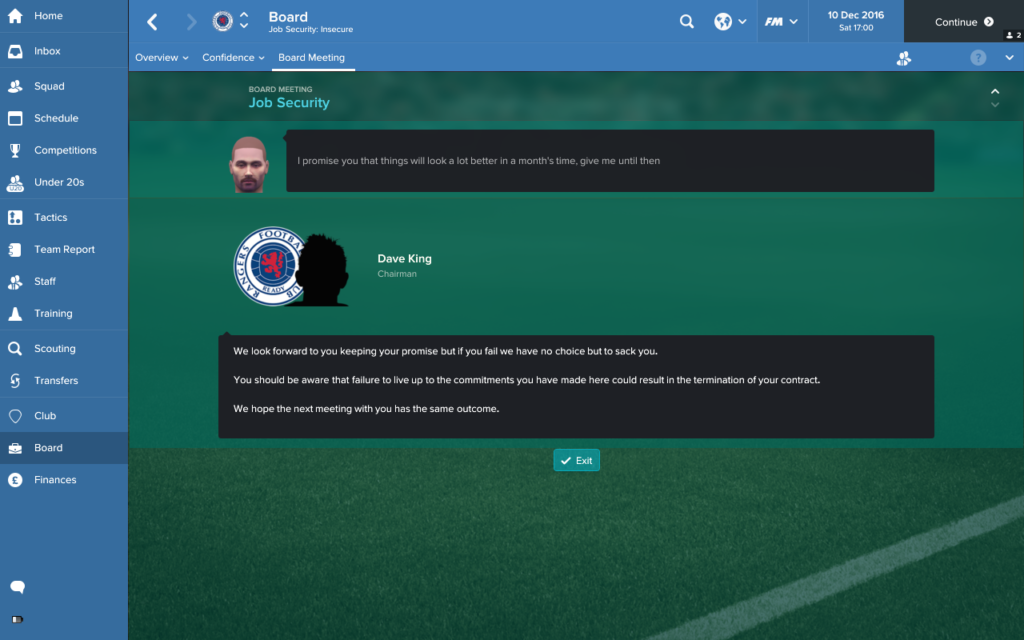 IAIN: Back to the drudgery of the league then and the challenge of a trip to Ross County. We mix things up a little to allow for fatigue. We have to play Aberdeen away in three days so I don’t want to take any unnecessary chances. This is an opportunity, possibly the seventh, for Tom Rogic to live up to expectations. I’m also going to leave Ross Doohan in goal, in accordance with my pledge to cultivate homegrown players. 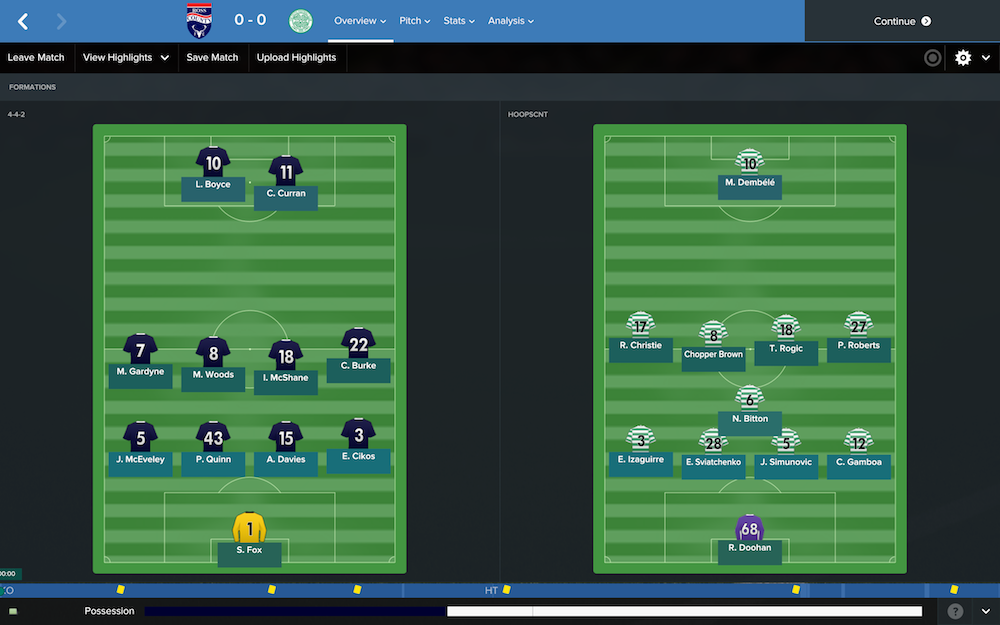 Well, that was immensely frustrating. Let’s focus on the positives first: Doohan kept a clean sheet.

Now the negatives: Even though we had the highlights set to ‘extended’, we didn’t get a highlight until the 70th minute. For over an hour, I can only assume that we passed the ball amongst ourselves while discussing our plans for Christmas. I gather that we had some half chances, but no real ones until the latter stages, by which point I’d moved to two strikers, attacking football and pushed the defensive line to within nine inches of the Ross County goal.

This is infuriating. I tell Alex how angry I am at my players for dropping two points, but he isn’t listening to me. He’s just staring out the window in silence. I hope he’s okay. 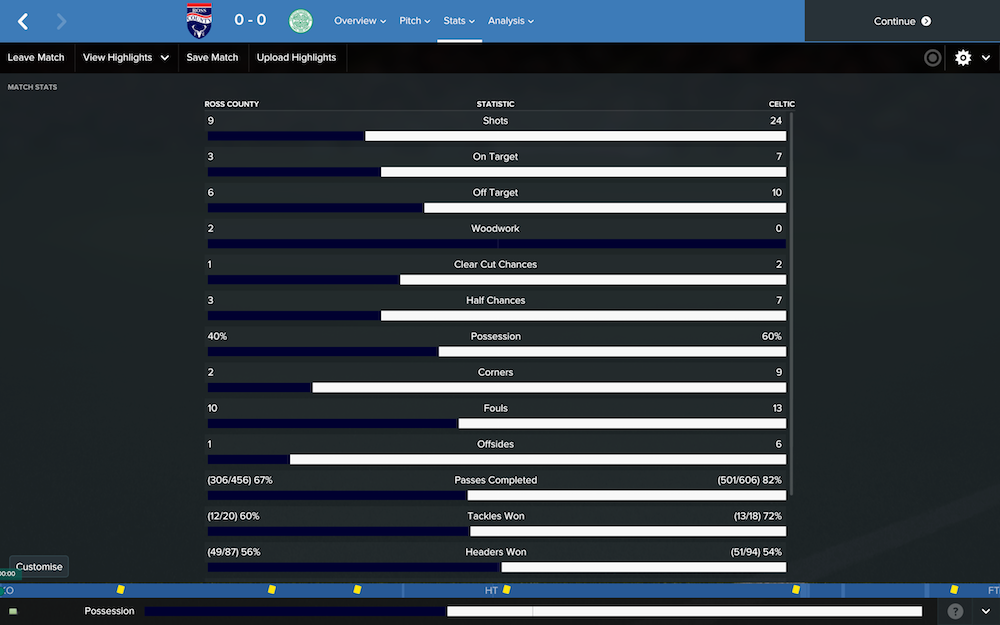 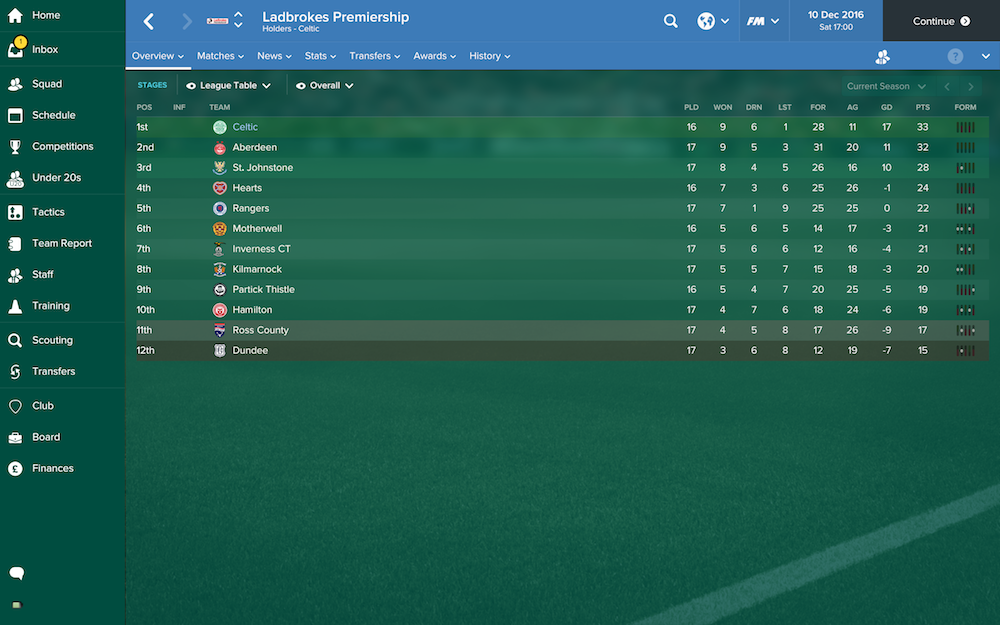