IAIN: We have some good news ahead of our game against Inverness, the final warm-up before the rivalry with Alex is renewed when Rangers visit Parkhead. Kieran Tierney, who has been so good that poor Emilio Izaguirre hasn’t had a look in, has signed an extended contract. Pep Guardiola has been spotted at Parkhead twice this month and I wanted to get a ludicrous release clause (£45m, since you asked) to make sure that we’re protected. I know he’ll go at some point, but I don’t want him to go yet.

We also have some odd news in that Inverness manager Ritchie Foran has some sort of problem with me. I’m a bit confused by this. I expect it from Alex, I’ll accept it from Hearts, Aberdeen and St Johnstone, but I’m not sure what to do with an Inverness manager slagging me off. I feel like I’m being heckled by a mouse. 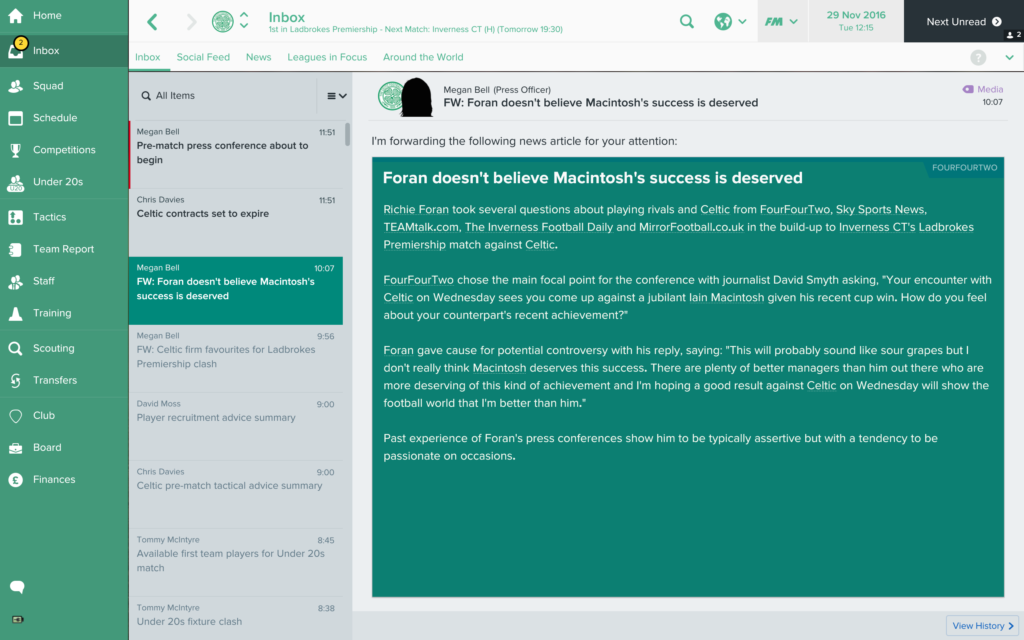 I’d like to dispense some instant justice, but once again my players are exhausted. I have to rest Gamboa, Simunovic, Forrest, Bitton and I’m not hugely comfortable with risking Dembele when the game with Rangers is just three days away. But let’s focus on what’s in front of us. Alex can wait. 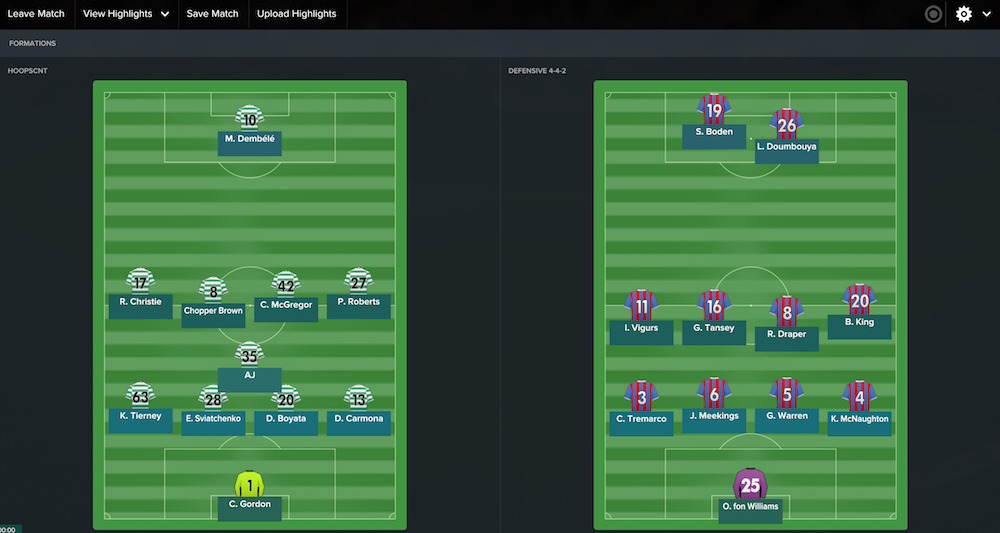 Eat that, Foran. Who needs a full strength team? We make light work of Inverness, thanks largely to a brace from McGregor. They have the temerity to score, but it only enrages us further and we end up scoring four. That’s the good news. The bad news is that I’ve lost Craig Gordon and Tierney to injury. Tierney, I can handle. We have Izaguirre. But losing Gordon is really bad. My back-up keeper is Logan Bailly, a Belgian with a handling of 10 and eccentricity of 17. Brilliant. What perfect timing. And I have had just about enough of Foran’s continuing shit fit. 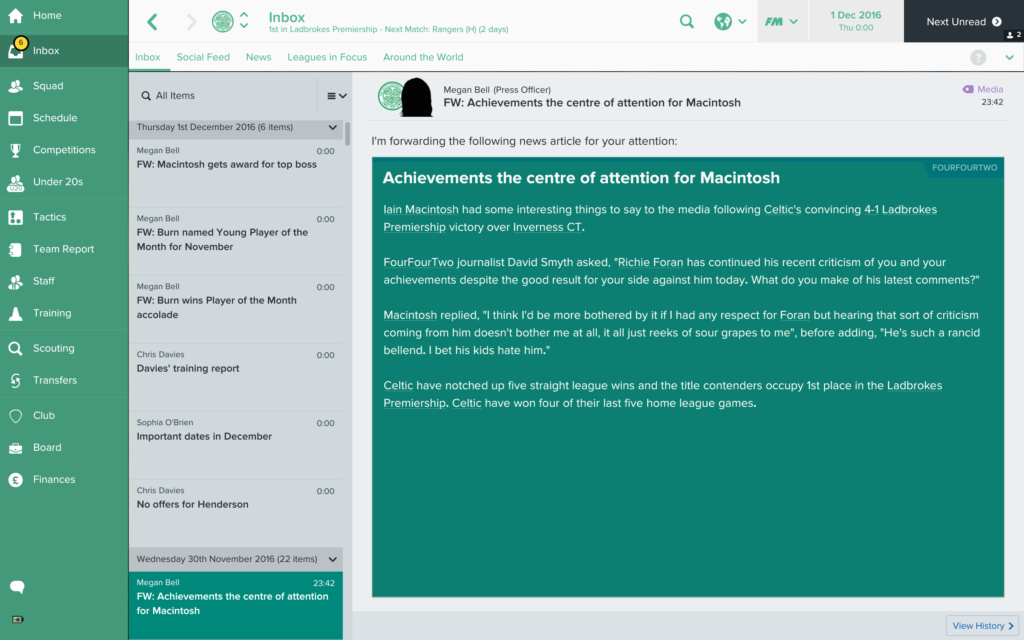 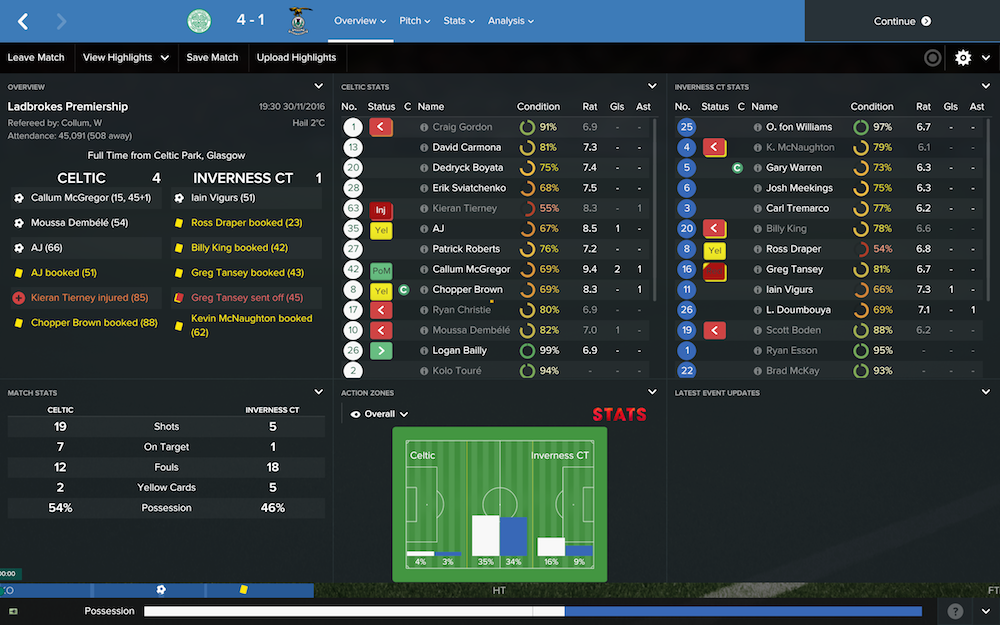 ALEX: Hamilton are something of a bogey team for my Rangers side, so I approach the away trip to the Accies with trepidation. The uplift to my squad’s morale by the recent run of wins seems as fragile as Waterford crystal; one defeat and their heads have dropped again.

The board, though, are still ‘satisfied’ with my performance, which given their ridiculous pre-season expectations seems only fair. Winning the league was always going to be tough and I need time to turn youngsters like Poyet and Rossiter into the world-beaters they can be.

I also desperately need to ship Senderos off somewhere, or at least find a replacement so he can clog up the bench instead. But anyway, the matter in hand is Hamilton away and we line-up 4-4-2, resting Rossiter for the upcoming trip to Macintosh’s lot but otherwise unchanged. 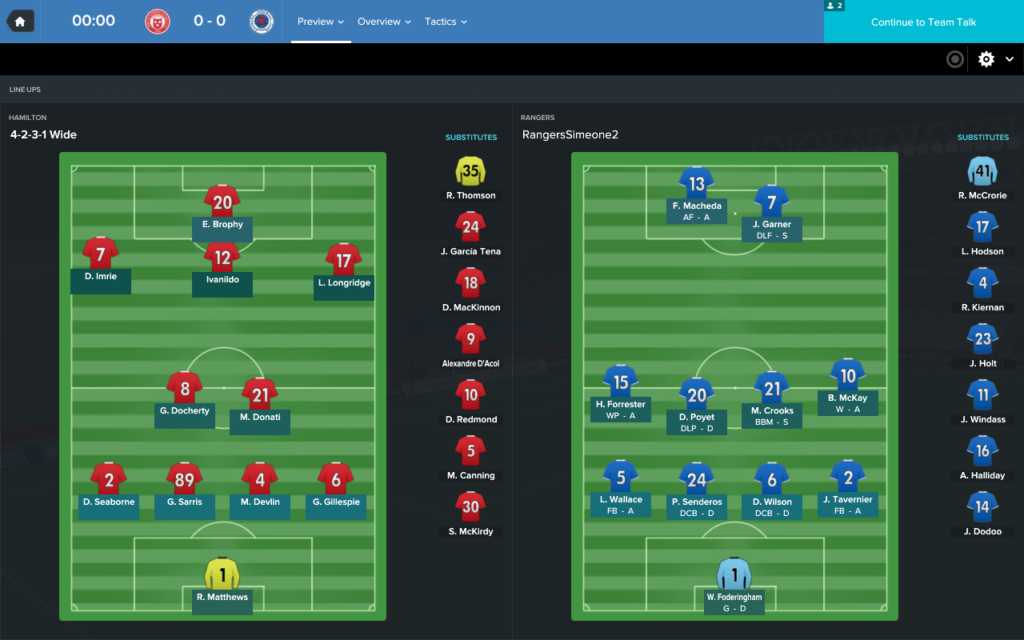 I’ll be honest, I have no idea what just happened.

James Tavernier got us off to a flyer, curling in a beautiful free-kick from the right side of the box to leave their keeper grasping at thin air. A solid start, I thought, and one to build on. And then the game disintegrated. They pulled it back to 1-1, then 2-1, then 3-1, then we made it 3-2 as Tavernier scored a second direct free-kick of the game (a first for me in FM). As I threw men forwards and tried everything to get the equaliser, Hamilton grabbed one more on the break to leave the final score 4-2.

As a match, it made no sense. We had 18 shots, 10 on target, to their 16 and eight on target. Despite only 39% possession, we also created a clear-cut chance, which they didn’t, and had more corners. We missed in every conceivable way, playing spell-blinding football at times without finding a way through.

I would fume, and indeed I did in the dressing room, but it’s another of those matches where I’m left scratching my head. The upshot is that we head to Celtic having lost two in a row, with a tired team and only three days between fixtures, a misfiring striker partnership, a shaky defence…and so on. But despite all that, I have seen glimmers in this team of something genuinely exciting. That’s not the desperate prattling of a man under pressure. Honestly. 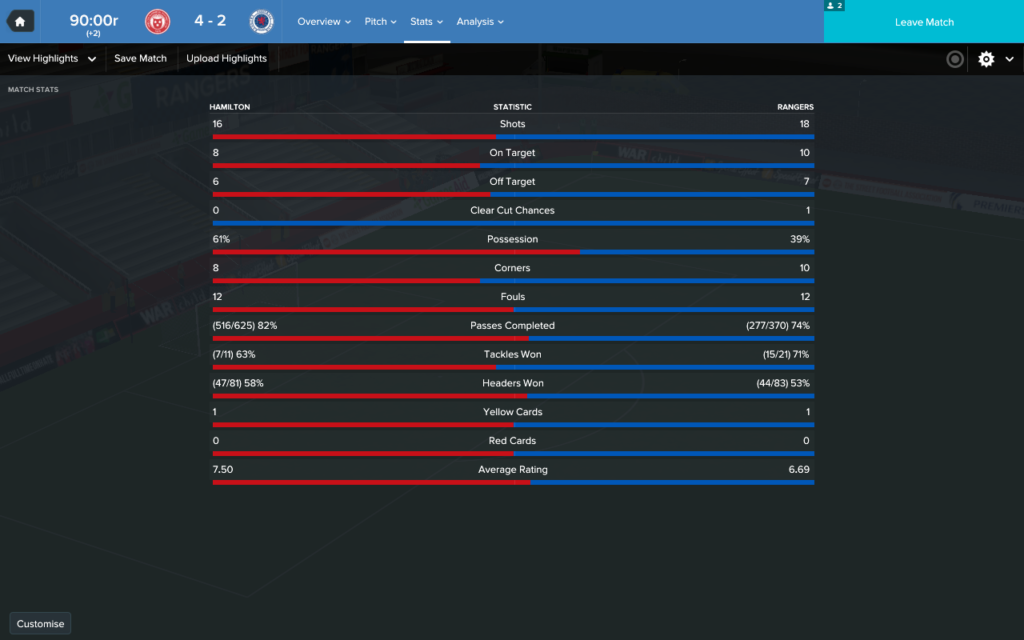 The danger isn’t hard to spot. We’ve already shown this season that we can be complacent when we’re in good form. We’re missing Craig Gordon and, with his reserve Dorus de Vries injured too, we’re relying on Logan Bailly, a great big eccentric lummox, to keep Alex at bay. I haven’t got Kieran Tierney either, but at least I know that Javier Izaguirre (Ed: Emilio’s brother?) is as good a replacement as I could hope for.

Once again, I’ve taken the time out to work on set pieces. I’ve watched a few of Alex’s games and I’ve noticed that most of his big players, by design or default, cluster at the near post. That’s where I usually aim my corners, so I mix it up, aim everything at the far post and cluster my big lads there. I even pick AJ ahead of Callum McGregor just because he’s a foot taller. If I lose, I don’t want to spend the next week hating myself for not working every angle. We should win. We’re a better team in better form and our 4-5-1 usually dominates a 4-4-2. But it’s the Old Firm game. Anything can happen.

"Absolutely. The board have complete confidence in @iainmacintosh and we're sure his Celtic career will be long and successful." pic.twitter.com/3rtRuhitFx

ALEX: There’s nothing to like about this scenario, to be honest. Two losses on the trot, even after four wins, and a trip to Parkhead knowing that Iain has already issued my team something of a spanking at Ibrox. I know that we are only three points from the European qualification spots, but the gap yawns in my mind, taking on colossal, unbridgeable proportions – you might say that this is getting to me a bit.

Nonetheless, I take heart from a few woes Iain is having to contend with: Craig Gordon, easily the best keeper in the league, is injured. And someone whom even I, with a pretty encyclopaedic knowledge of football, have never heard of is taking his place.

I also know that Iain’s team have been treating recent games like strolls in the park, rather than intense, fretful, night-time dog-assisted yomps. I hope to capitalise on a malaise that Iain seems unable to counter, even with his dressing-room tea-cup throwing.

@AFHStewart "What Alex is offering with Rangers…they're not bad results, no. They're 'alternative' results." pic.twitter.com/uIDBBwqFN6

We line-up in the 4-4-2 again, but I have a cunning plan. Poyet is nominally up front in place of Macheda, but as soon as the match starts, I’m going to bring him back into a deep-lying playmaker role in front of the back four, both to shore up the midfield and match Iain’s formation.

Garner will have his work cut out up front, but he’s a tough lad and if you can’t raise yourself for an Old Firm derby…? Otherwise, the team is as normal: Senderos and Wilson, with Tavernier and Wallace looking to get forward, Rossiter and Crook shoring up the middle, and McKay and Forrester bringing guile and pace from the wings. Well, that’s the theory…

IAIN: Bah! A draw, and that’s all we deserved. Alex changed his formation moments after the kick-off and switched to a 4-5-1. It’s hard to tell what effect it had, but given that we were set for extensive highlights and we barely saw a flicker of action in the entire first half, I’d say that he successfully gummed up the midfield to the point that our counter attacks got backed up in heavy traffic.

I had a full and frank exchange of views with the chaps at the break and sent them straight back out. Six minutes after the break, Ryan Christie, still adjusting to his new role on the left, tossed in a free-kick and AJ beat Pip Senderos to win the header, directing across the edge of the six yard box. Now, officials have a very difficult job and you can’t expect them to be absolutely perfect, so I think we should just move past Chopper Brown’s ever-so-marginal offside positioning and focus on the tenacity required to win the ball and stay upright for the rebound. Top marks, Chopper.

The game, such as it was, meandered onwards without major incident. No changes from either Alex or myself seemed to make any noticeable difference. What did make a difference was the ridiculous penalty decision awarded by a cretinous referee too consumed with self-loathing to do his job at a level even close to basic competence. With one act of gross negligence and stupidity, he awarded Alex a penalty that Federico Macheda happily converted. December 3rd and the Scottish FA is giving out Christmas presents already.

After that, Alex and I seemed to both conclude that a point was better than nothing. I resisted the temptation to put two up front and chase the win, he chose to consolidate the result by falling back. A red card for Matt Crooks two minutes into injury time made not an ounce of difference.

A point then. Not what we wanted, but probably, on the basis of our subdued performance, all we deserved. Next time, Alex. Next time.

[internal monologue] "He's actually wearing a suit."
*looks to camera*
"Can you believe this guy?"

ALEX: Do you know how hard it is to light a smoke when your fingers are trembling? Well, let me tell you dear friends, I know now. Games like that tend easily to cliché, but that was a rollercoaster.

Celtic opened with a goal that looked for all the world to be offside after a first half of such stultifying tedium I worried for the poor souls who were watching voluntarily, as opposed to being shackled to the game by virtue of employment. Iain was delighted, of course, and I simmered and glowered but then, as we started to push forward, a corner led to what I might charitably call a surprise penalty.

I don’t think either of us really know why it was awarded, but at that point I was 4-3-3 and attacking and I felt then, as now, that my gumption deserved some sort of pay-off. Macheda, on for Garner, coolly slotted home (is there any other way?), and the dam of my emotional reserve was breached. It was not an edifying sight.

The rest of the game was a maelstrom of emotion as I sought to tighten up and defend our one point at all costs, even as Matt Crooks was sent off for scything down an opponent. Eventually, the final whistle blew and we had managed to register what was, in fact, my first league draw. A fair result? Probably: both decisions were questionable and neither side made a huge number of chances. Hopefully it’ll shore up morale a bit, if nothing else. 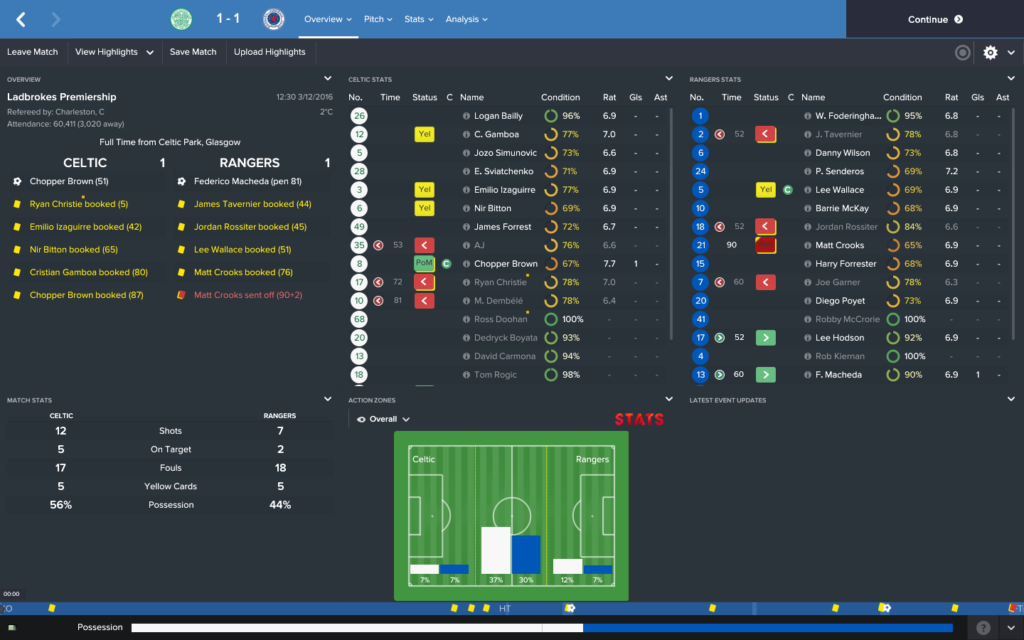