You know what? Let’s just try to ignore what happened last time. Let’s just accept that mistakes were made, lessons were learned and let’s all move on. Because, after all, we have just qualified for the World Cup and not every England team manages that.

We are, however, only the second seeds in the draw, which means we’re going to end up with someone very good in our group. Or we’re going to get Russia. And drawing heavily on the well of good fortune that has so far delivered us defeat by Scotland via the knee of Grant Hanley, we end up with Russia. We also get Japan and Mexico, which means we’ve actually got quite a balanced group, in that no one in their right mind would back any of us to get past the quarter-finals. But there’s still time to change hearts and minds. 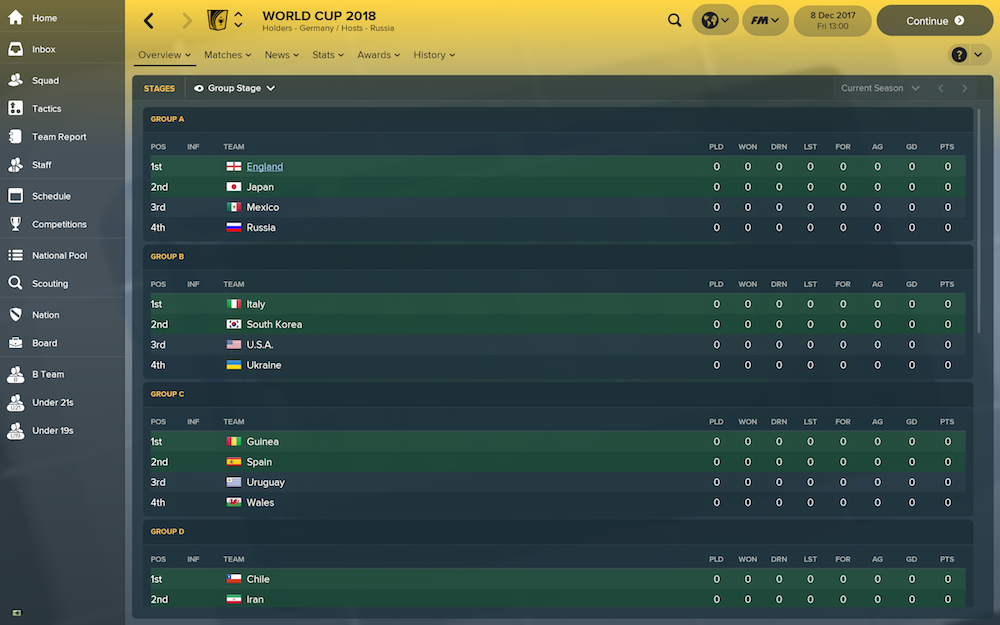 Tradition dictates that I should now select my warm-up sparring partners solely on their proximity to my group opponents, but I’ve never held with that logic. I don’t think playing Ukraine to prepare for Russia or battling the USA to get ready for Mexico makes too much sense. I’ll have Wales, a team ranked higher than us with a star player we can work on nullifying, and then Northern Ireland to help us work on breaking down smaller nations. That will cut down on the travelling as well, which has absolutely no bearing in a universe contained entirely on my laptop, but I’m in deep now and the lines are getting blurred. 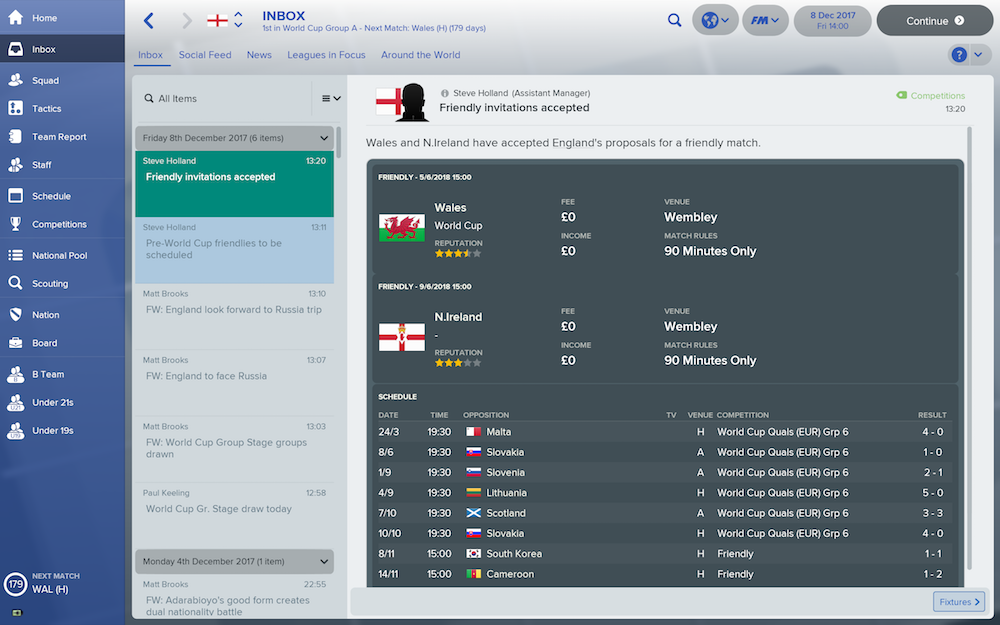 Mind you, it’s a really long time until the World Cup and my ‘continue’ finger is getting sore. So when my personal assistant lets me know that Ukraine and Zambia are interested in friendlies in March, I almost bite their arms off. International management is lovely for a pounds earned/hours worked life balance, but by thunder, it’s not very exciting.

It does at least give me time to tweak those tactics. I know what I’m looking for, I’m just having a bit of a struggle putting it into practice. I want to play on the counter-attack and I want to hit teams really hard and really fast, ideally by getting down the flanks and getting the ball in low to a cavalry charge of advancing players. You know, like I did at Arsenal. It’s all about getting the balance right, obviously. That’s why you use the anchor man, you see. It means three players stay at home to safeguard you from a counter-counter-attack. And that’s why you have so many players on attacking settings, so that they just roar fearlessly up the pitch. You know, like they did at Celtic.

Unfortunately, we haven’t be able to translate these ideals into performances and this whole project is turning into a humiliation. You know, like it was at Everton. But I’m not walking away from this. I’ll push us further up and increase the tempo, see if that makes a difference. 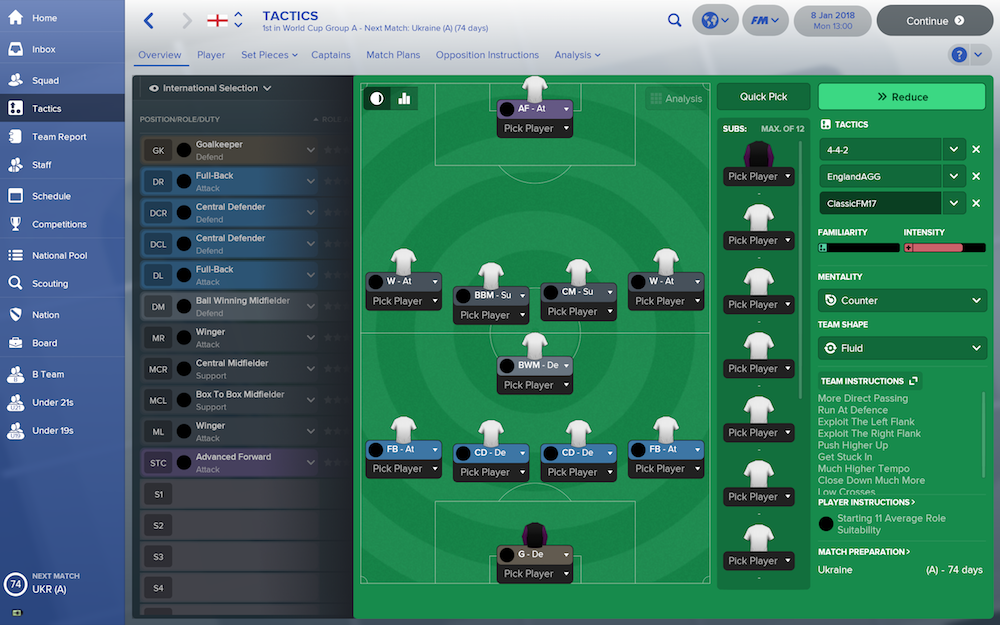 Much has changed since the last time I got the players together. For starters, there are barely any reported injuries, which is remarkable given the fact we’re approaching the vinegar strokes of the domestic season. The league table looks much as you might expect, with the monied elite dining alone in the top six and tossing scraps to everyone else. And so it’s time to go again, with a slightly fresher squad. 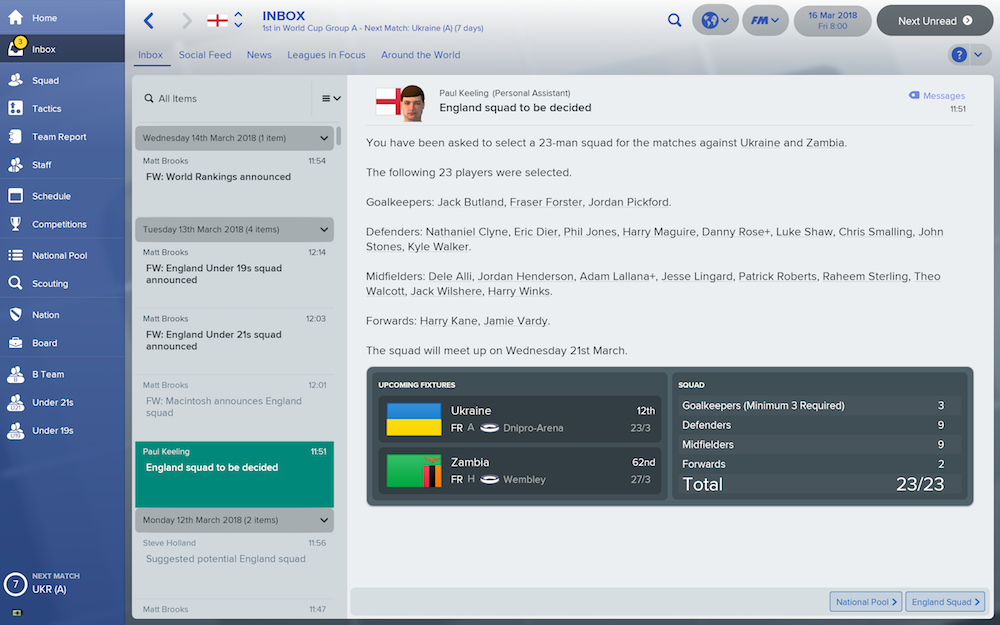 Adam Lallana, Danny Rose and Nathaniel Clyne have all recovered from long-term injuries, so they come into the squad. Jack Wilshere is playing well after his unexpected move to Manchester City and I’ve finally accepted the pleas of my coaching staff and selected Theo Walcott. As a final flourish, Patrick Roberts is added to the mix, as he’s really kicking on at Celtic. It’s a more mature squad than I’ve selected in the past. There’s no room on this occasion for Marcus Rashford, Trent Alexander-Arnold or Jamaal Lascelles, but the door isn’t closed. Not yet.

It’s an easy enough team to pick. If anyone asks to only play 45 minutes, they can have a good, long think about the ramifications of that request from the bench. Except for Harry Kane, of course. He’s allowed to do whatever he wants. The press think this will be a very close game. I wish I shared their optimism. 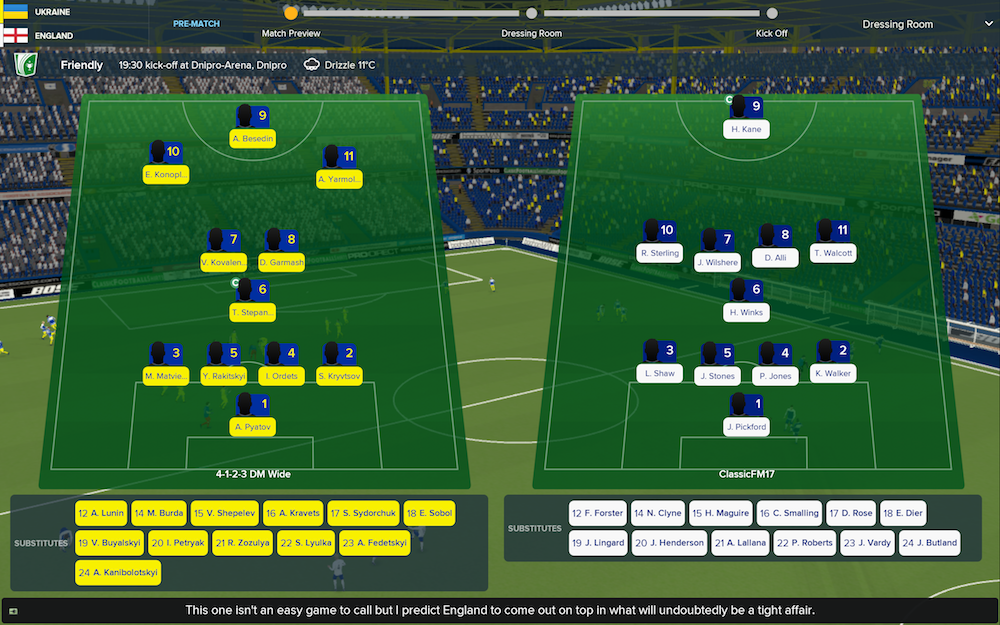 None of the tweaks have any instant effect. For the first 25 minutes, we struggle to even get the ball, with our possession dropping all the way down to 22%. I’ll accept that counter-attacking tactics mean low possession, but that does seem a little too low. Midway through the first half, Wilshere takes advantage of a defensive mix-up, darts in on goal and spanks the ball high and wide, which I take as a sign of what’s to come. I am, however, mistaken.

Just before the half-hour mark, Walcott gets down the right and fires in a cross – not a low cross, but a cross all the same. Kane gets his head on it, deflects it to the far post and Raheem Sterling finishes from a narrow angle. This pleases me. Shortly afterwards, Sterling turns provider from the left. Fed by Luke Shaw, he moves up the field and swings in a cross – not a low cross, but a good, meaty cross – and this time Walcott is there to finish. In this remarkable back and forth from one flank to the other, we nearly score a third before the break when Walcott crosses (not low, but I’ve given up caring) and Sterling smacks it off the post. We’re 2-0 up and cruising. 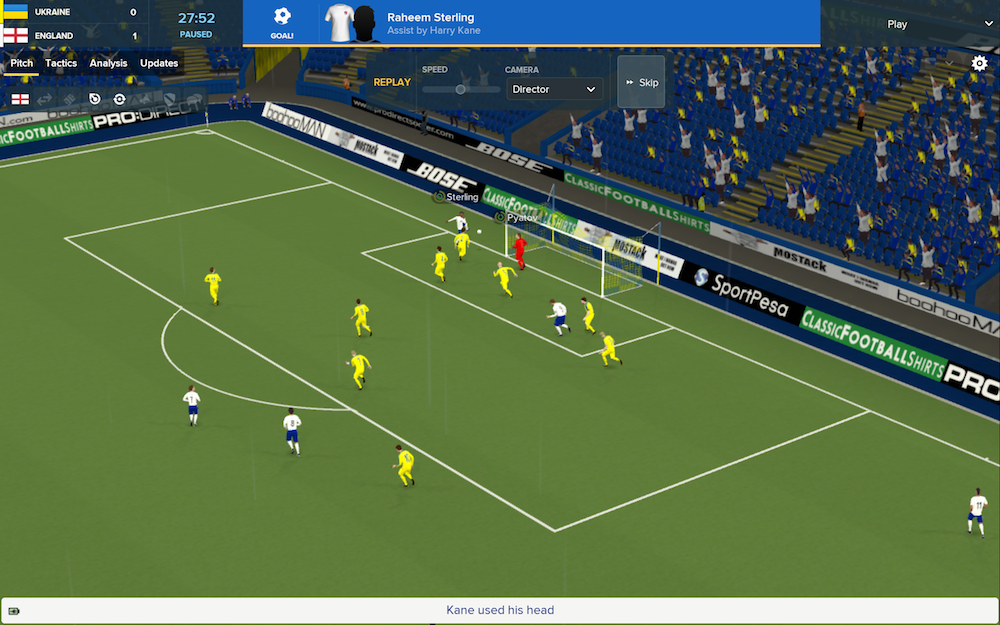 I’m obliged to remove Kane at the break, but I don’t want to make anymore changes. Sadly, reality bites. Sterling picks up a knock, Walcott tires quickly, Shaw is rubbing his calf and I have to make a raft of substitutions. Eventually the unwanted disruption costs us and Ukraine get one back. But we’re England. We’re not easily rattled. We take a breath, we regroup, we switch to defensive football and we hold out to secure a morale-boosting win.

Sigh. Do we bollocks.

As soon as the first Ukraine goal goes in, heads drop all over the park. We start misplacing passes, we get caught out of position, and all the judgement and technique from the first half is replaced by an empty-headed, sweaty panic. Sixty seconds after Andriy Yarmelenko’s first, Artem Fedestskyi equalises and while we’re getting our heads round that, Artem Kravets hits the winner. From two goals up to three two down, that’s the England DNA. 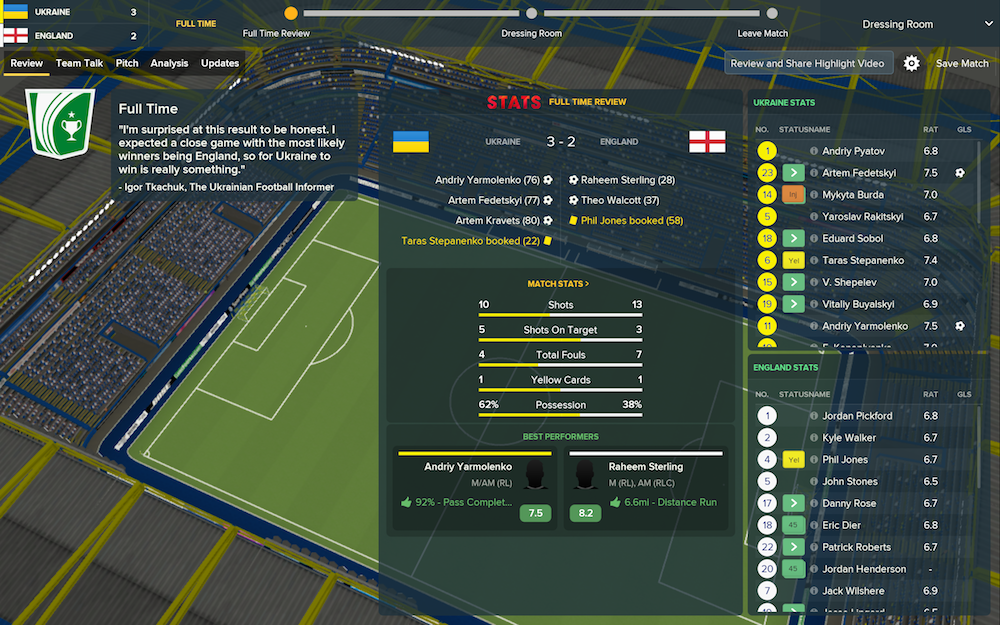 It was all going so well. Too well. And now look at us. I’m dreading the visit of Zambia.