Imagine a lovely cup of tea. A lovely cup of tea in your favourite mug. Whoever made it for you, knows you. They made that tea with love. You lift it to your lips and take a slow, steady sip. Yes. YES. This is the way you make tea. The right strength. The right sweetness. The right temperature. You go back in for another taste, a proper gulp this time. But something’s changed. It’s… salty? Is that salt?

You give it a sniff. That can’t be right. It was perfect a second ago. You try again. This time you can definitely taste salt. And possibly soil. And it’s not very warm. You put the mug down on the table and stare at it. On the outside, nothing has changed. Steam coils invitingly from the surface. It is, or at least it appears to be, that perfect cup of tea.

You pick it up and try to take another sip, but you recoil from the stench of rotting flesh and you drop the mug. The evil fluid that pours out onto the floor burns a hole in the carpet, but you’re not there to see it. You’ve run to the toilet, your cheeks bulging with sick. Welcome to my FM18 England team.

We started so well. We started with such confidence and shrewdness. A tight little selection of players who defended well and broke with such impetuous joy that the world would have fallen in love with them in Russia. But even their own mothers wouldn’t love this motley collection of screw-ups and morons. Since qualifying for the World Cup we’ve lost three friendlies, each time offering up a display of something close to total incompetence. But now we play Zambia.

I don’t know anything about Zambia, but I know that I need a good result to restore the confidence of this squad. Unfortunately, I’ve got a few issues. A number of club managers have asked me to restrict the use of their players to 45 minutes and given that we picked up three injuries in the last game, I don’t really blame them. I’m in a bind. And when I’m in a bind, I reach for the familiar. It’s time for 4-4-2. 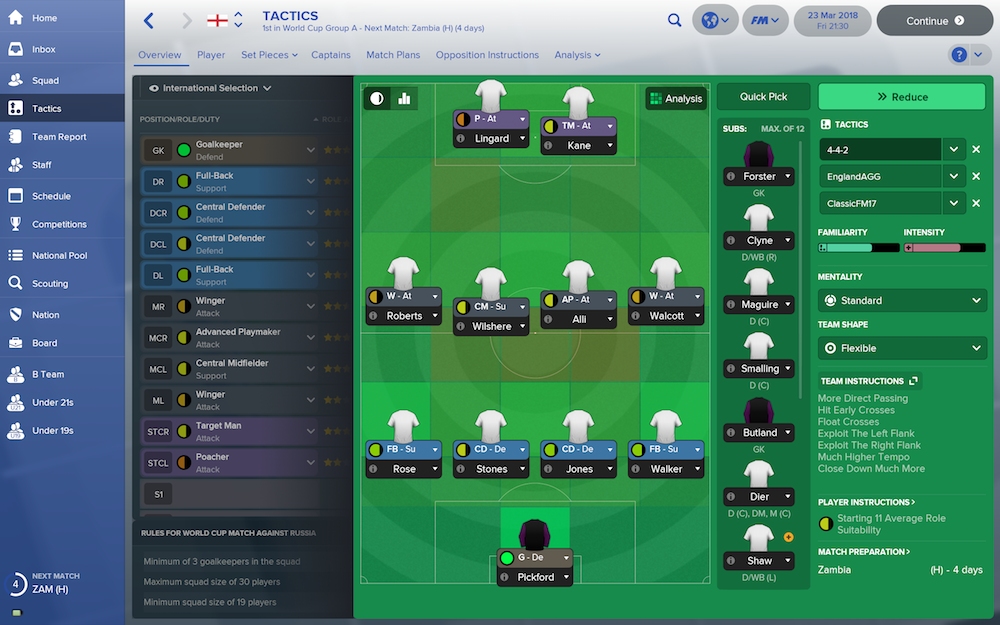 Now, this is going to be a bit of an issue as I only have one striker in my squad, Harry Kane. But he’s looked like he’s needed some company up there, so I push Jesse Lingard up there. He’s not a bad frontman and he’s got a bit of pace, so they should be able to complement each other. In the absence of any fit left wingers, Patrick Roberts can have a full debut and Theo Walcott gets a go on the right. This isn’t too shabby. Get the ball, get crosses in, work the big-man little-man partnership and secure a very necessary win.

We start well. Very well in fact. Lingard finds Kane with a neat little pass and the Spurs striker smashes one off the post. Midway through the first half, he hits the woodwork again. Zambia have barely touched the ball. Unfortunately, we’ve already lost Walcott to injury. But it’s a good chance for Adam Lallana to work his way back into contention. Except it isn’t because he gets injured before half-time. I don’t have any more wingers. But Jordan Henderson used to play on the wing at Sunderland, so maybe he can do a job. 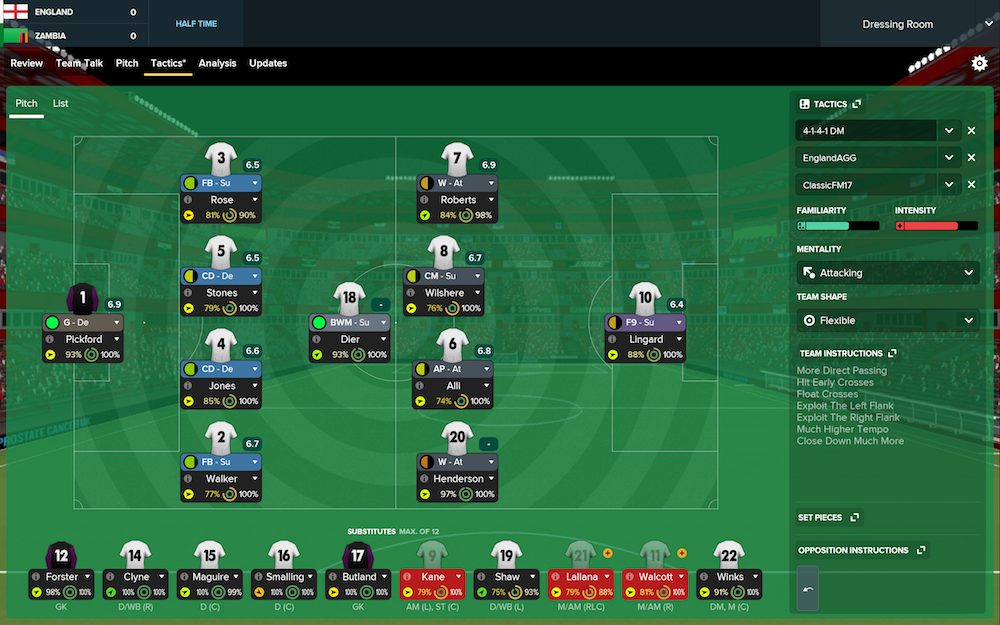 I’m not allowed to use  Kane in the second half, so Lingard is left alone as a sort of false nine and everyone else just has to do their best to support him. This might be the messiest, most unbalanced, ill-thought-out England team I’ve ever seen. Midway through the second half, Henderson gets injured. I don’t think I’ve ever seen such a domino rally of calamity in one particular position. Zambia’s left-back must be an absolute bastard. The game, easily forgettable, drifts to a 0-0 draw. I can only imagine what the Wembley crowd would make of that. Instinctively, I wipe imaginary spittle from the back of my jacket. 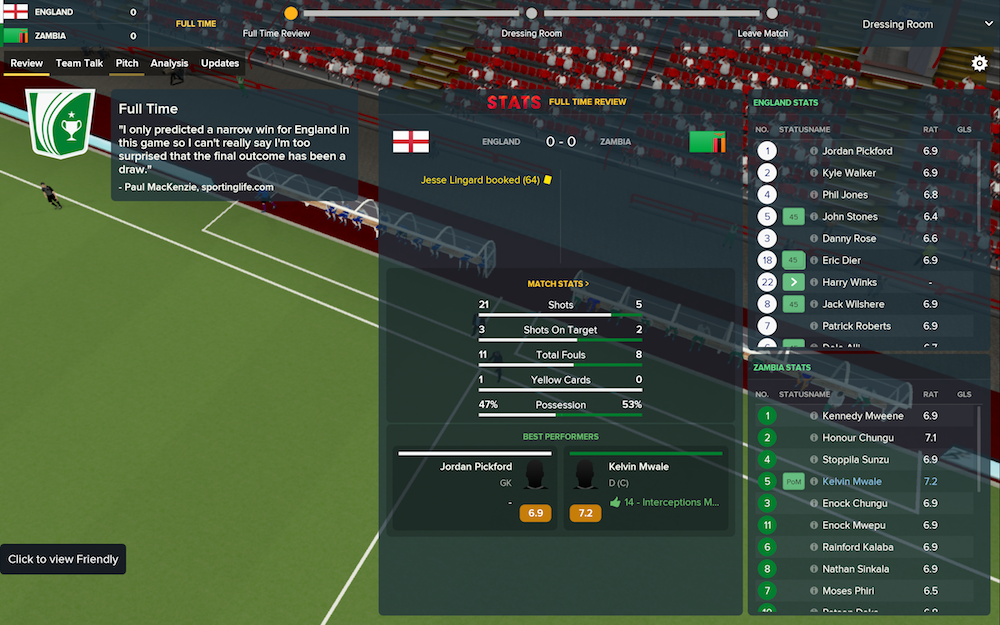 We’ve gone backwards. We’ve gone so far backwards that we have no clear game plan, no philosophy and nothing to believe in. I have to rip this all up and start again, assuming that the FA don’t step in and replace me with Harry Redknapp. 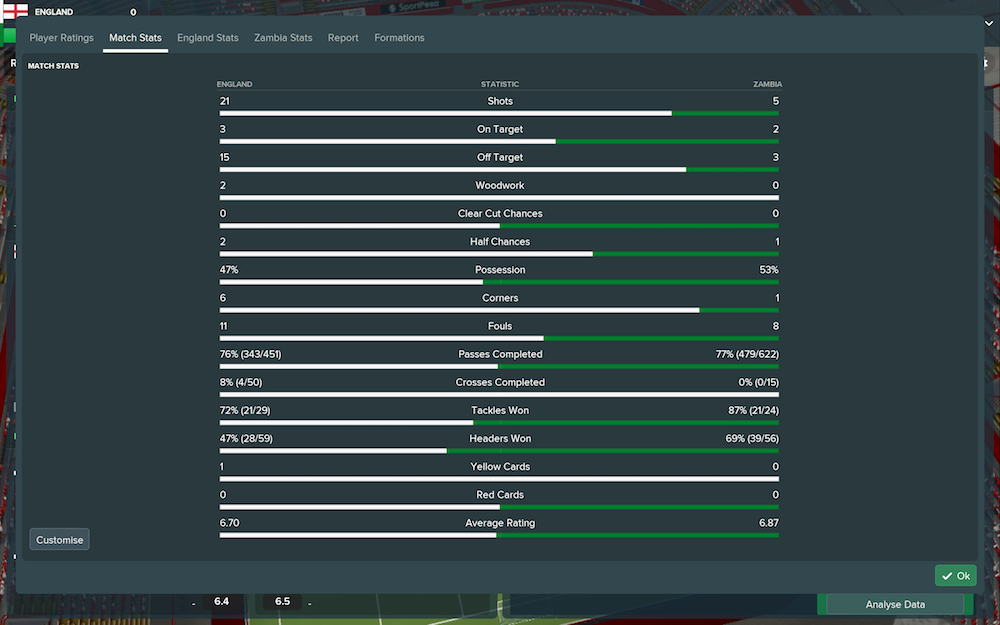 We haven’t won in four games now. There’s only one option. Something I’ve been putting off for a long time. Something I’ve never been entirely comfortable operating. I think it’s time for a back three.