“They say that the prospect of being hanged in the morning concentrates a man’s mind wonderfully; unfortunately, what the mind inevitably concentrates on is that it is in a body that, in the morning, is going to be hanged.” – Terry Pratchett, Going Postal

It wasn’t supposed to turn out like this. I did everything I could to ensure that it wouldn’t turn out like this. After a little experimentation and a couple of hiccups, we settled on a formation and a tactical plan that was entirely sensible; a patient build-up of play in a fluid 4-3-3 that allowed our most talented players to express themselves. It’s just a little unfortunate that they chose to express themselves by repeatedly losing possession or, on the off chance they retained it until they were within sight of goal, slamming the ball into the upper tier.

This should have been a tactical shape for the ages, a structure that we could grow within for many seasons, guiding the progeny of our academy, relentlessly accumulating silverware in a golden age of Merseyside supremacy. Instead, it’s just never quite clicked. Indeed, it has clunked. And now it’s all or nothing, shit or bust, house keys on the poker table time. Either we beat high-flying Tottenham Hotspur at White Hart Lane or this project grinds to a premature halt.

There was a time, not very long ago, when it seemed that we had cracked it. We beat Sunderland and Hull in quick succession and, while they may not have been the most ominous of adversaries, the manner in which we beat them suggested that beating other teams might not actually be beyond us. Regrettably, this was not the case. We lost in appalling style to Watford. We lost gallantly to Manchester United, but we lost all the same. We should have beaten Liverpool, but we lost and that one really stung. We were granted the universal lifeline that is West Ham at home, much like Roberto Martinez in real life last season. We lost that as well. And if we lose this, it’s all over.

I know that it’s nearly all over because the board’s faith in me is so strong that they have granted me the princely sum of £425,000 to rebuild the team in January. That would buy me approximately 10 days of Wayne Rooney. Thanks, Bill. Thanks so much. Oh, and don’t forget to go and fuck yourself.

At least some people have faith in me. Everton legend and all round good sort Tim Cahill has been telling Squawka that the very idea of sacking me is ridiculous. And he’s right. If I could just convince the players to like me, if I could just turn results around, if I could just spend some money on some footballers who aren’t utterly incompetent, I’d really have a chance of fixing this mess.

Sadly, Cahill is very much on his own in the ‘Macintosh Knows’ camp. The bookies give us only a 10/1 shot and I’ve never met a poor one yet. We are described as, “vastly inferior,” which would cause great offence if there was anyone in the dressing room who cared even slightly about their own reputation or the reputation of this great football club. Doubtless, they’ll just sit there with their stupid enormous headphones on, flicking blood diamonds at each other for banter. God, I loathe them. 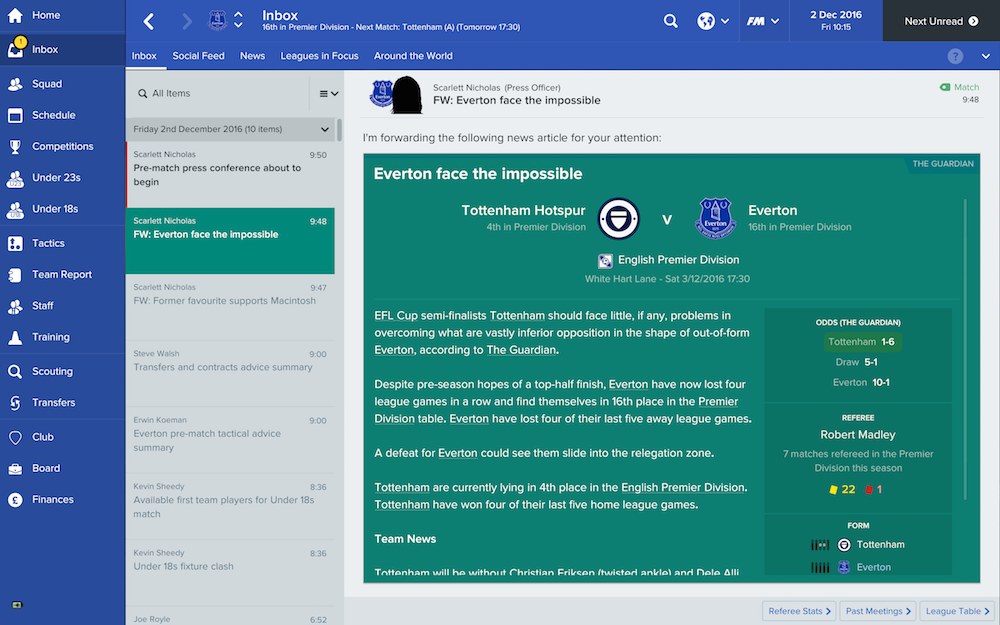 So what do I do? Do I rip it all up and start again? That is very tempting. To throw down a back three at this critical vanishing point, to stun Tottenham with my impetuous guile, to leave the commentators scrambling for pen and paper as they try to ascertain the depth of my cunning. But, no. That won’t work. This game puts a premium on a settled side. You could get away with mad arsed tactical switches in CM01/02, but on FM17, you’ll just send eleven confused man-children to the slaughter. There’s no sense in that.

Our only hope is to put faith in what we’ve learned, to keep doing what we know to be right. A solid defence with protection from midfield. Fluidity behind the attackers with licence given to our very best players. And if we can score first and lift our morale from the floor, who knows? We might just pull this off. This could be the day when it all turns around. 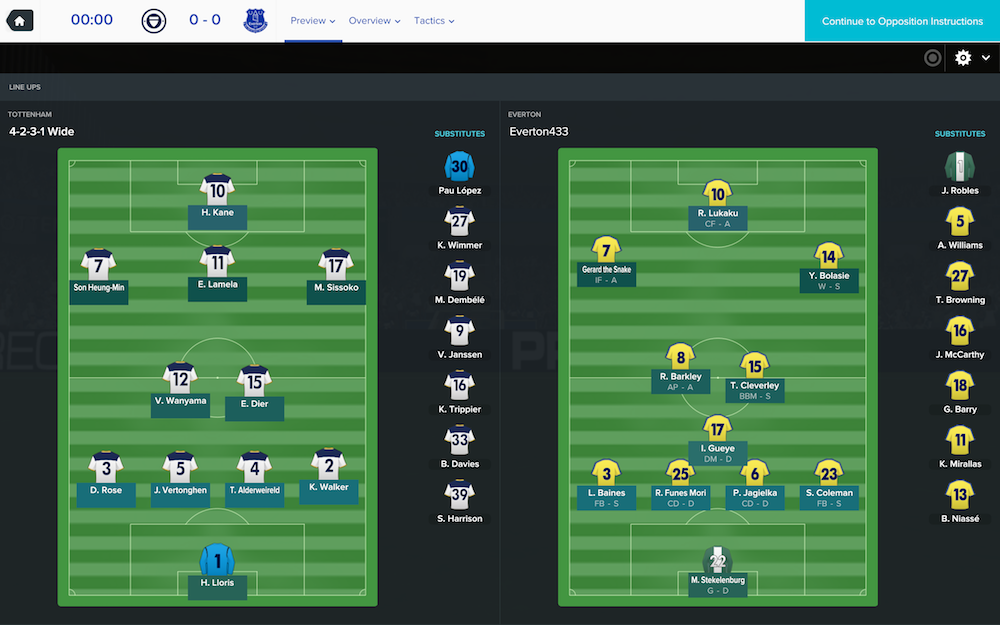 These men. These tiny fractions of men. I don’t know how they sleep at night. I don’t know how they face their families. When their children ask them what they do for a living, are they honest? Do they look down into those plump little faces, so full of adoration and love, and do they say, “I steal it, kid. I steal my living. And I don’t care who I hurt along the way.”

We made a bright start. We made decent chances. But we always do that. It would be so much more impressive if we kept going rather than collapsing like a burst bouncy castle as soon as we go behind. Because that was it. That was the end of it. When Son Heung Min scored the first of his FOUR goals, we laid down and died. Those players. They didn’t show a leg. They didn’t even show an ankle. We would have put up more of a fight had I stabbed eleven upside-down broomsticks into the White Hart Lane turf and hung shirts on them. At least they’d have held a decent defensive line.

It was relentless. They went through us like x-rays through custard. It was hard to tell for sure, but it looked as though their players were laughing for most of the second half, unable to comprehend how this could be considered the best league in the world. We were a fitful, lethargic, heartless disgrace and I’d rather die a thousand times than spend another minute in the company of these human skidmarks.

Good luck to whoever takes over. I’d recommend either selling and replacing every single member of the first team squad or just sealing the doors of the dressing room with concrete and leaving these detestable wankers to ponder their uselessness for all eternity. And you can print that.

Oh, I’m sacked, am I? What a surprise. Well, fuck you, Bill. You know what? You know what no-one’s ever told you? You were a bit hammy on Coronation Street. Yeah. Hammy. I said it. Someone had to.

What happened to showing faith in your manager? What happened to patience? Jesus Henry Christ, Bill, even Mike Walker got longer than me. You could have made a stand here, Bill. You could have sided with me over the players. But you didn’t, did you? Because you’re a coward. You’re all cowards. Well, fuck you. Fuck your football club. And fuck this game*.

I’m going for a pint. 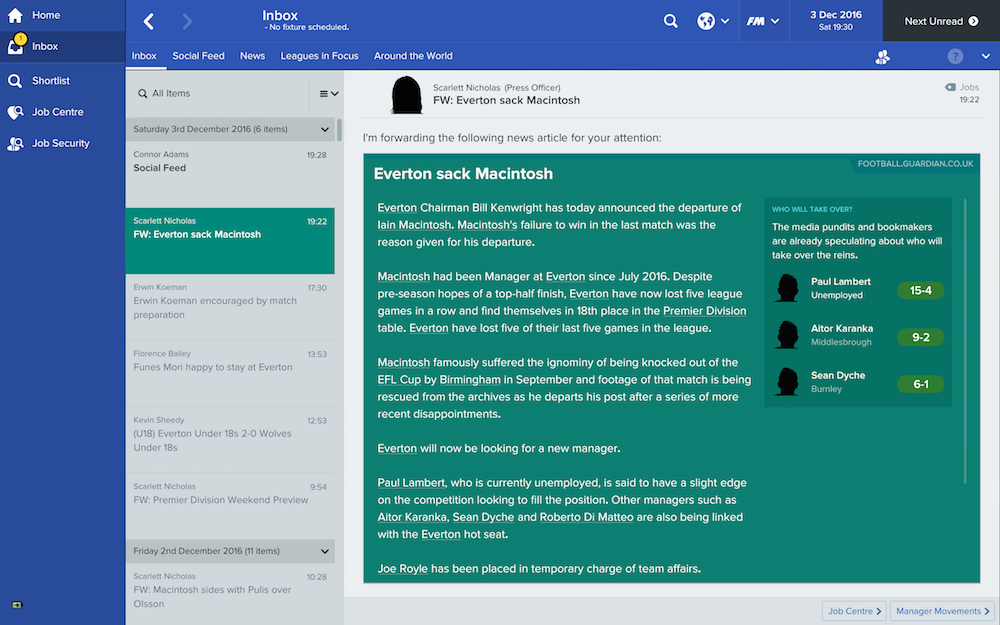 *- I don’t mean that. I love this game. I just wish it would love me back.