I’m still angry. We’d turned it around. Those two victories against Sunderland and Hull, the win over Southampton. We’d taken nine points from a possible 12 and we were rising up the table. And then Watford happened. Watford happened all over our face.

I have to take the blame for that. I had noted before the game that one-striker teams always struggled against Walter Mazzarri’s back three. Clearly my analysis is stronger than my decision-making. I am often accused of tinkering, but this time it was my refusal to budge that killed me. Watford won and they won well. My decision to remove a defensive midfielder at half-time handed the game to them. I will learn from this.

The fume, oh the fume, is all the stronger because the next two games are horrible. Manchester United away and Liverpool at home. I need to come out of this little run with something to show for my efforts. All things considered, I think a change may be required for Old Trafford.

We’ll drop the wide men back a bit because I don’t want to get caught out on the flanks. Hopefully, we’ll be able to block up all the space in the centre and prevent Juan Mata from causing chaos. Then I want us pushing up as one, getting forward to support Romelu Lukaku. We have good footballers, I want to trust them to play good football, to pass it around, to move into space. And to not do anything stupid. The odds are against us here, but I think we can surprise a few people. 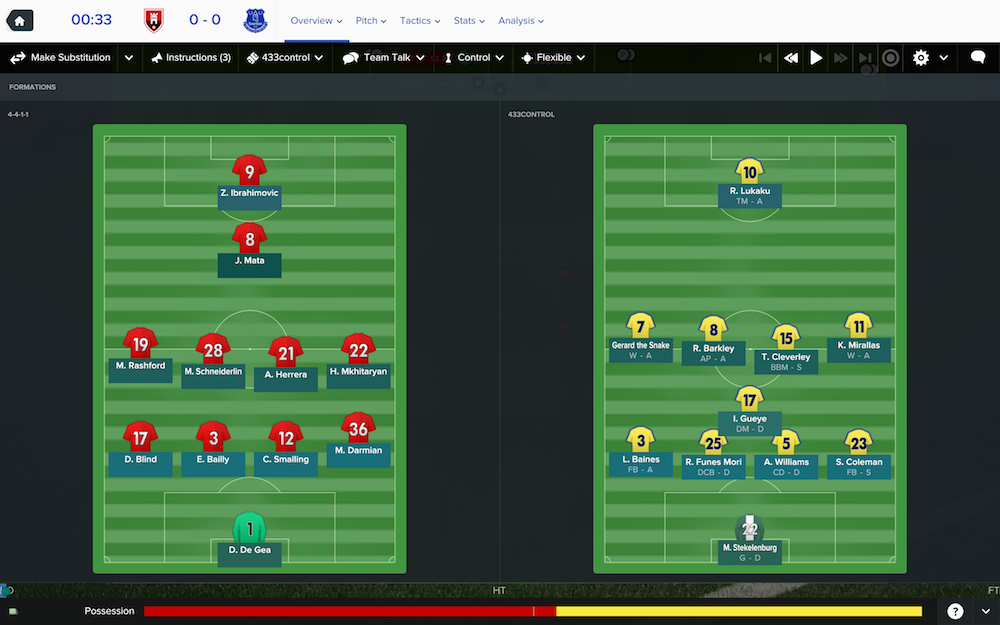 That really was a surprise. We played very well. For half an hour. In fact, we should have taken the lead early on. There was some really nice interplay from Ross Barkley and Lukaku and two clear cut chances inside the first 20 minutes. United had more of the ball but we were doing more with the ball. Finally, there was a sense that we were a team, attacking as a unit. Zlatan Ibrahimovic was winning everything in the air, but he picked up an injury that looked certain to end his afternoon.

Except it didn’t. He didn’t come off. And then ten minutes before half-time, Mata turned Idrissa Gueye inside out, Zlatan raced onto his through ball and smashed it past Maarten Stekelenburg. 0-1. No matter. These things happen. We had been the better team. As long as we kept our heads and kept doing what we were doing, we’d have every cha…20 seconds after the restart, Mata scored a second. 0-2. Gerard the Snake had gone on one of his trademark meandering runs into the midriff of an opposing player, United broke and doubled their advantage. 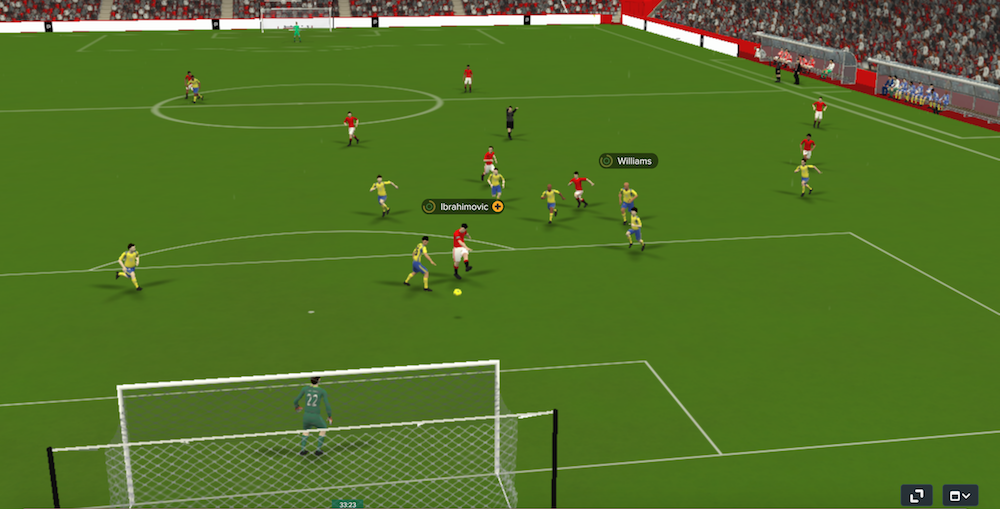 Four minutes into the second half, Mata lofts one over the back four, the apparently injured Zlatan races onto it and lobs Stekelenburg. 0-3. I am, it has to be said, a little disappointed with the way that this has turned out. 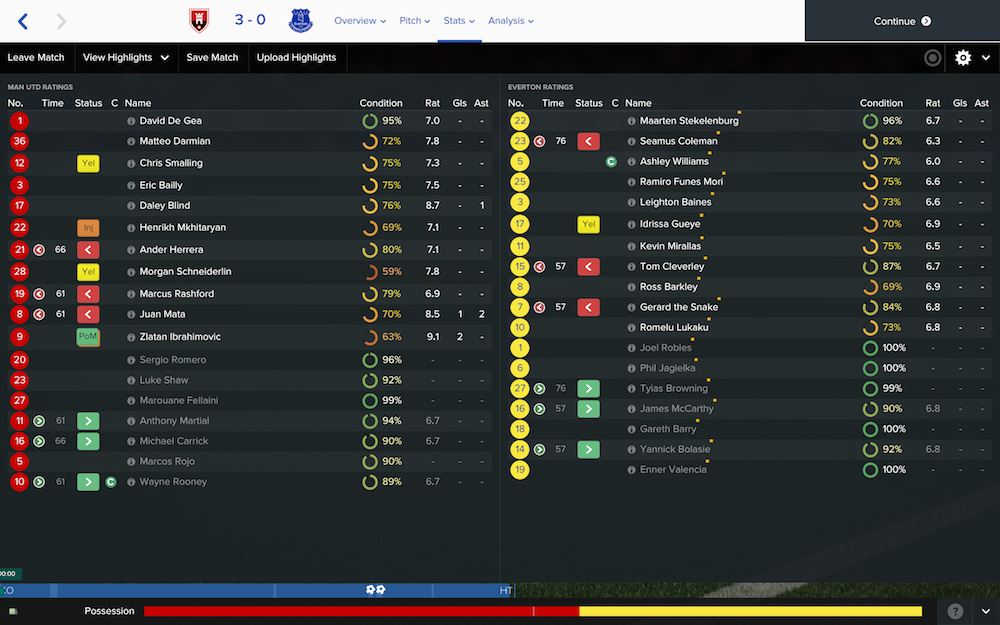 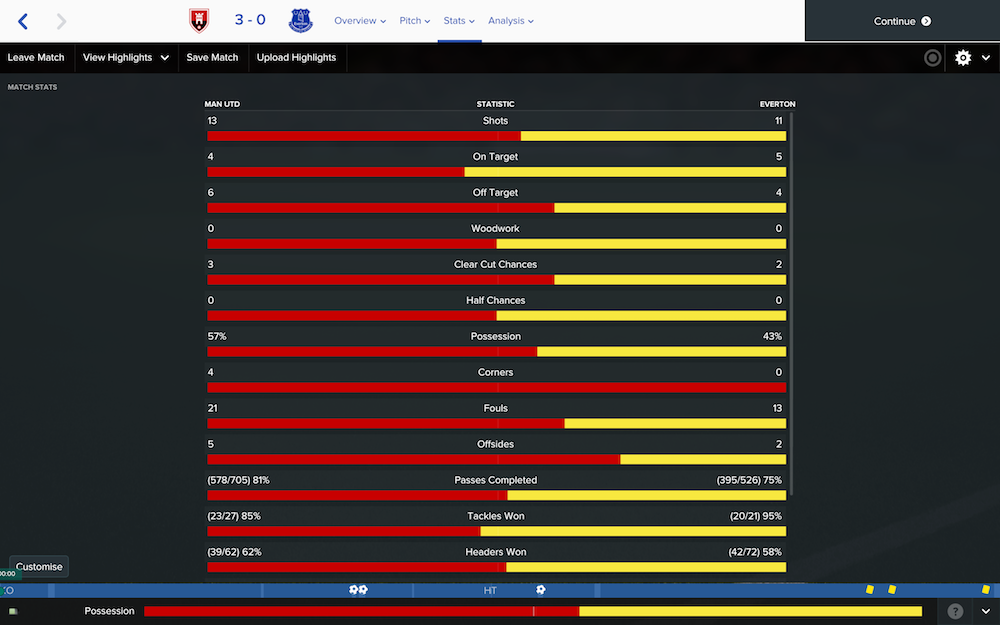 But look, there were positives here. We started well. We played well. We were undone by moments of genius by one of the greatest players of his generation. You can’t legislate for that. And besides, when have Everton ever been expected to win at Old Trafford? We’ve had a horrible start. This was matchday 11 and we’ve had Manchester City, Arsenal and Manchester United already. And now we’ve got Liverpool too. But I like that we’ve got Liverpool.

You see, Jurgen Klopp hasn’t been enjoying any more luck than me. In fact, Liverpool are 14th while we’re 13th. They go for the sort of fast, attacking style of football that should play straight into our hands, especially at what will be a packed and noisy Goodison Park. We’ll go back to the more attacking formation that won us three games from four, with everything going through Ross Barkley and hoping that those useless lummoxes on the flanks actually show up to help for once. This could be the game that launches our season into overdrive. 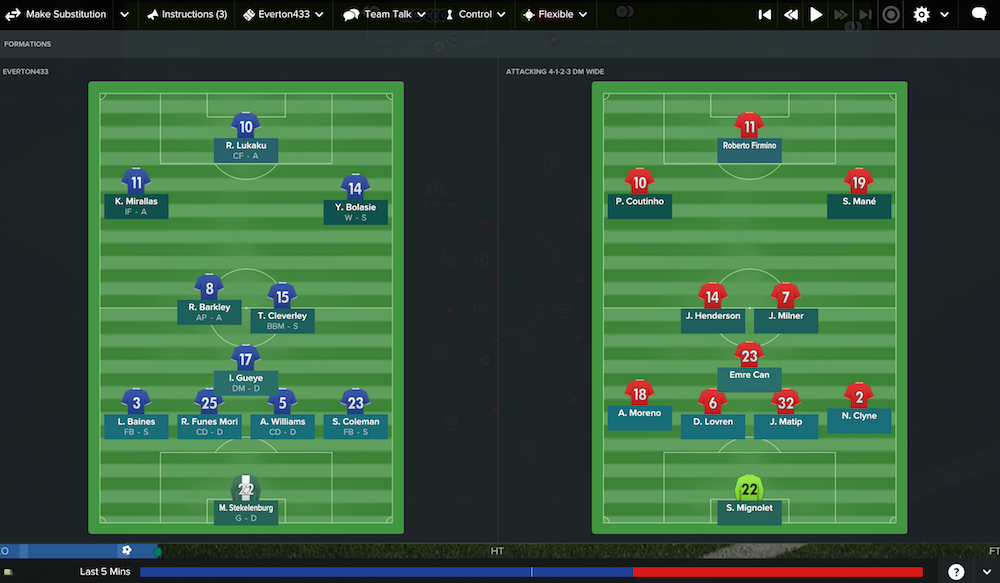 What a start. Any manager would dream of a start like this. In the 11th minute, Barkley surges up the pitch and plays a delightful ball in for Lukaku who slams it past Simon Mignolet. Five minutes later, there is an extraordinary passage of play that sees us smash the ball off the right post, the crossbar and the face of Alberto Moreno in quick succession. Liverpool are flailing, they can’t cope with this sort of assault. All the signs were there at Old Trafford that we were beginning to click into this 4-3-3 and now they are abundantly clear. We are irresistible.

Sort of. In the 25th minute, Leighton Baines loses the ball on the edge of the box, Sadio Mane fires in a cross and Philippe Coutinho stabs the ball home. That was Liverpool’s first shot. Ten minutes later, in a move that begins when Lukaku is dispossessed on the edge of Liverpool’s area, Mane lets off a particularly wayward shot that appears to strike Tom Cleverley in the back of the head before rebounding past Stekelenburg. Liverpool have not been in this game at all and now they are 2-1 up. 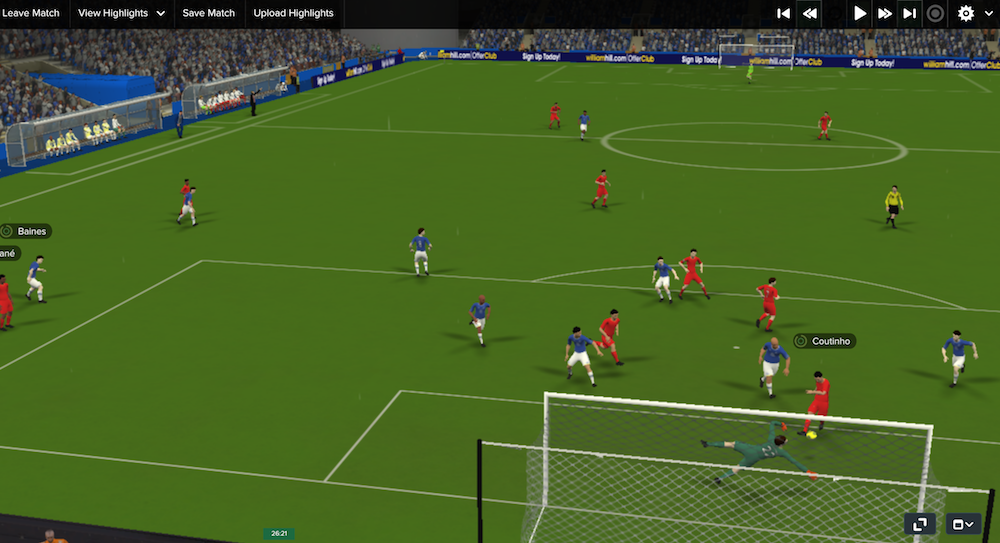 At this point, and quite understandably, the Everton players lose faith in everything. Heading for a third defeat in a row they are, to a man, the footballing version of the US Democrats on election night, dumbstruck, tears rolling silently down cheeks as the blue wall collapses and the screen fills up with red. Performances nosedive. There is no rousing them from their slumber. Liverpool begin to enjoy themselves, passing the ball around with impunity. Inevitably, they score a third. They are, in those latter stages, the only team showing a leg. I am growing increasingly concerned. 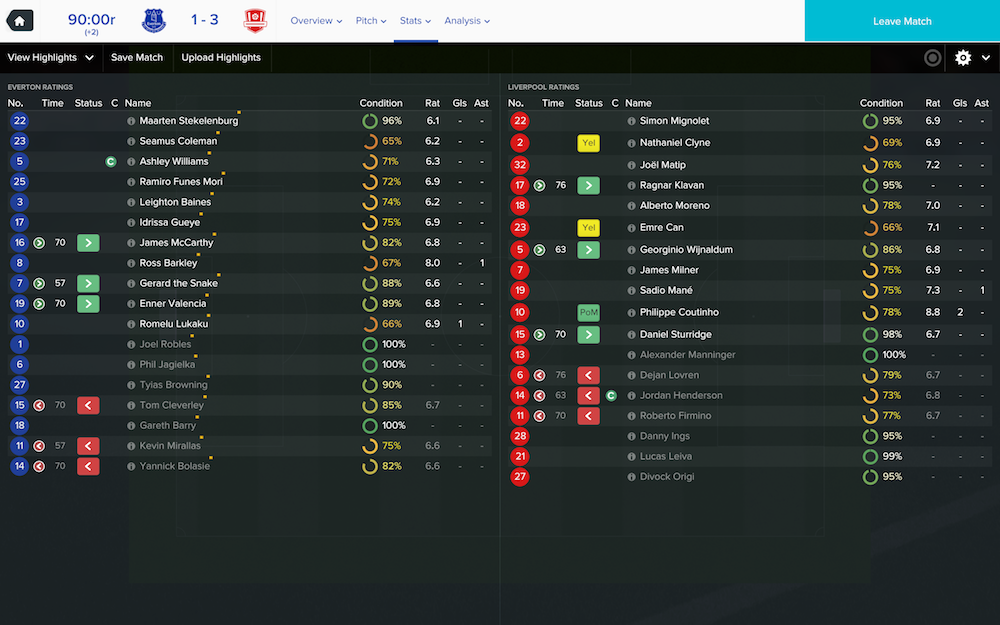 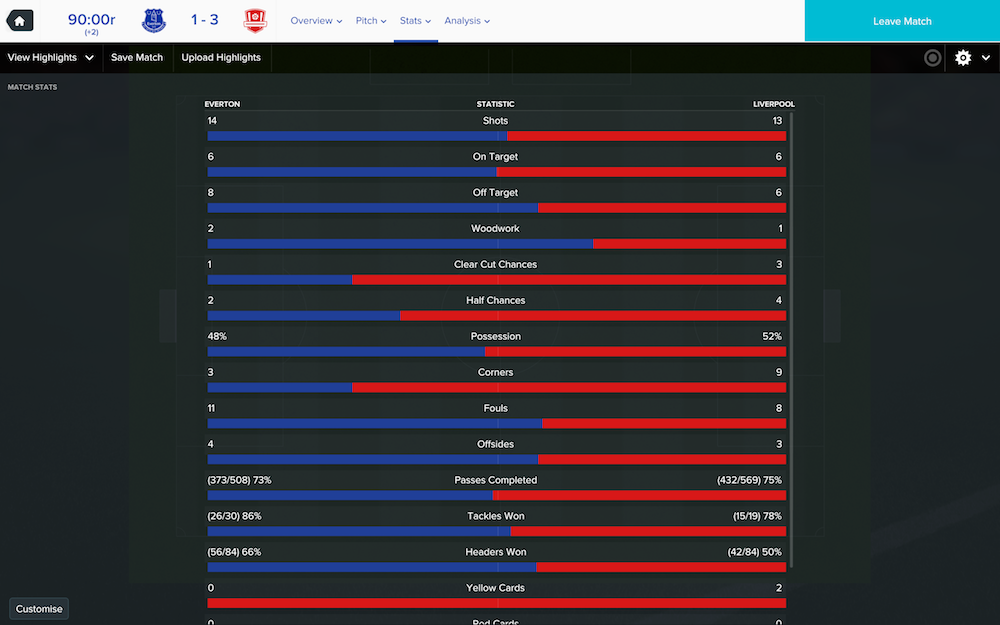 As you can imagine, I am feeling very down. I have a formation that I know works. I know because I can see it working. For at least half of every game I lose. We attack as a unit, we make good chances, but we cannot catch a break. And when it starts to go wrong, it really, really goes wrong. But at least we’ve got West Ham at home. West Ham at home is exactly the sort of fixture I need right now. They’re not doing as badly as I would hope, but it’s still West Ham. At home. Surely our luck will change now?

We make only minor changes. There’s nothing wrong with what we’re doing. It’s only when the game gets away from us that the opposition seems to play well. While there’s hope, while there’s parity, we’re the best team on the pitch. We just desperately need to avoid going behind because we don’t seem too resilient and until the transfer window opens, I can’t do anything about that.

My biggest concern is the players’ state of mind. It was obvious from the start that my appointment was unpopular. Yannick Bolasie has had trouble motivating himself to play for him since the beginning of the season and the manner of my team talks (calm or assertive) always offends three or four more players. A pox on Generation Snowflake and their propensity to be bottom-hurt by free speech. This would never have happened with Toby Hibbert and Alan Stubbs, proper football men of substance and valour.

But we must plough on. The method is sound. Only circumstances are against us. I remember being in a similar plight with CM0102 Everton. On at least five different occasions, in fact. You stay true to what you know to be right. You stay true to yourself. Eventually, you will prevail. Today feels like the day when it all changes. 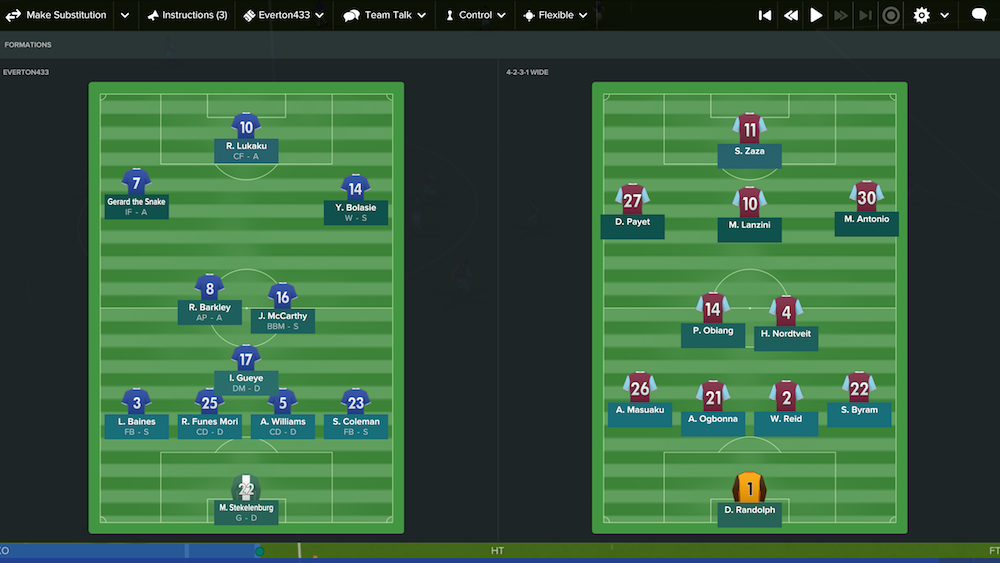 I am bereft of hope. I am adrift in cold, swelling seas and I cannot feel my legs. My fingers grip the driftwood more out of obligation than any desire to survive. For how can I survive? There are no friends out here. No-one is coming to rescue me. Better to relax and sink into oblivion, to seize that last strain of power; the choice of whether to live or die, than to have that choice taken away by the sea. I shall think of you, my love, as the light fades. The way we danced. And the way you held me so close.

No. I cannot give up now. Not even after this…betrayal. This abject surrender. This dereliction of duty. This…Everton. You make me sick, but I will fight the disease. I know it is in you to play good football. I know that you can win games, I have seen it. But Jesus Henry Christ, this is appalling.

Once again, we started well. The post vibrated for some time after Barkley struck it early on. We made chances too. Darren Randolph excelled himself in stopping them. And then Michail Antonio looped a header past Stekelenburg and we wobbled. We didn’t fall down though and that’s what makes this all the more irritating. Having taken Baines off free-kicks, it was Gerard the Snake who equalised from 25 yards just before the break. That was good. That felt right. That should have sparked the comeback. And it did, in a way. It’s just that it wasn’t our comeback. 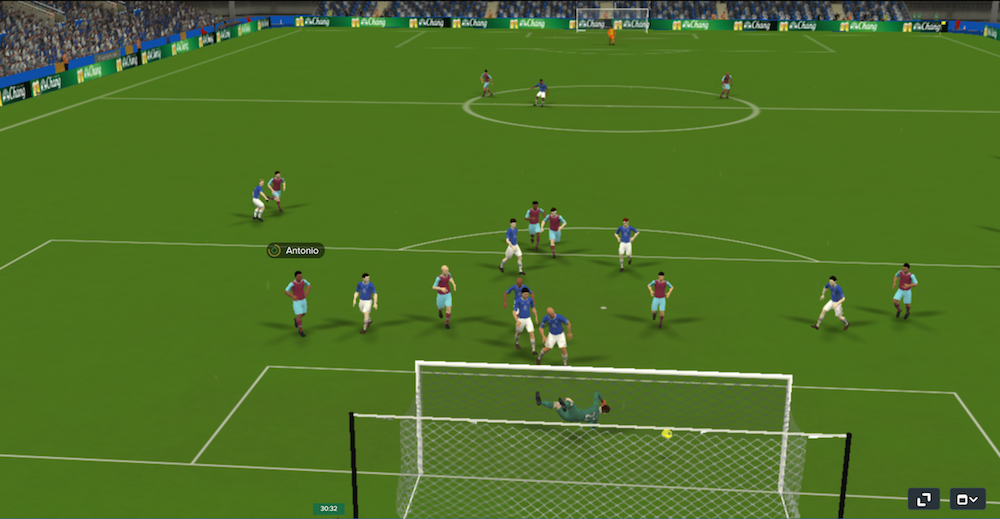 The media had been on Ashley Williams’ case in the build-up to the game. They’d suggested that his poor form was one of the reasons that we were losing. And they were right too. But I wasn’t going to tell them that. I thought it would be better to defend my man from the press pack. He made a point of thanking me too. “The only thanks I want, Ashley,” I imagined myself telling him, “is for you to put in the performance of a lifetime on Saturday.” And so he did. In his entire life, Williams will never again play this badly.

Beaten by a big ball over the top, Williams could do nothing more than heave and gasp as Simone Zaza ran through to put West Ham 2-1 up. Sixty seconds later, he beat Zaza to Arthur Masuaku’s cross and headed powerfully past Stekelenburg. 3-1. Six minutes after that, he chose to mark no-one in the box and Pedro Obiang wandered into space to make it 4-1. Not that he was the only offender. Lukaku could not have exerted less effort without lying down in the centre circle and going to sleep like a cat in a sunbeam. Baines and Coleman, so crucial to the gameplan, gave the ball away so often that you’d suspect it was radioactive and that they feared for their fertility. That’s four defeats on the spin now and I’m not feeling too positive. 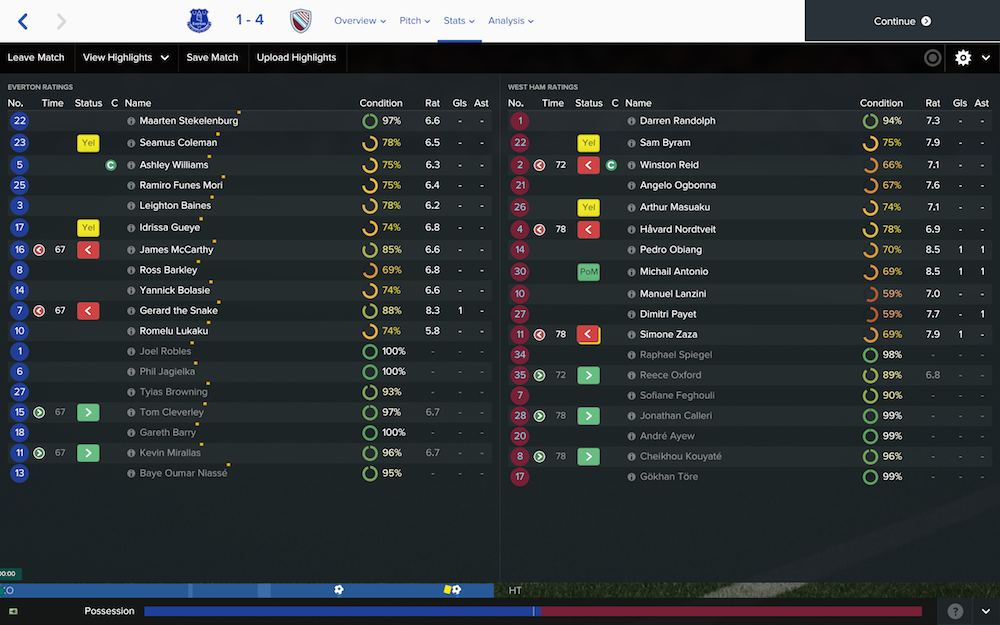 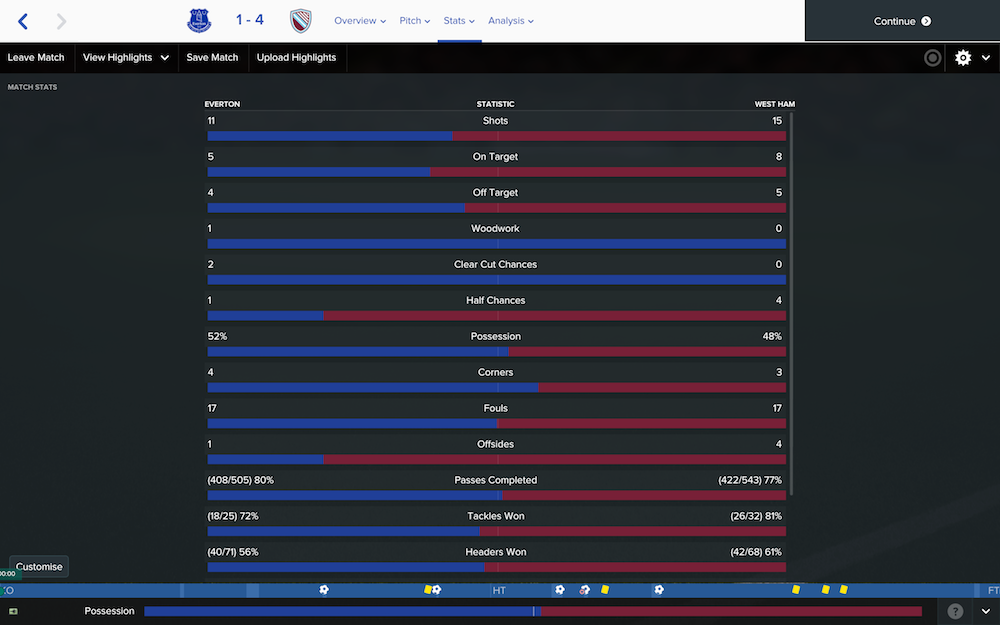 The board aren’t too happy either. I am summoned upstairs for a little chat about expectations, failure to deliver expectations and the ramifications for non-delivery of aforementioned expectations. Afterwards, I sit in my car and cry for a while. 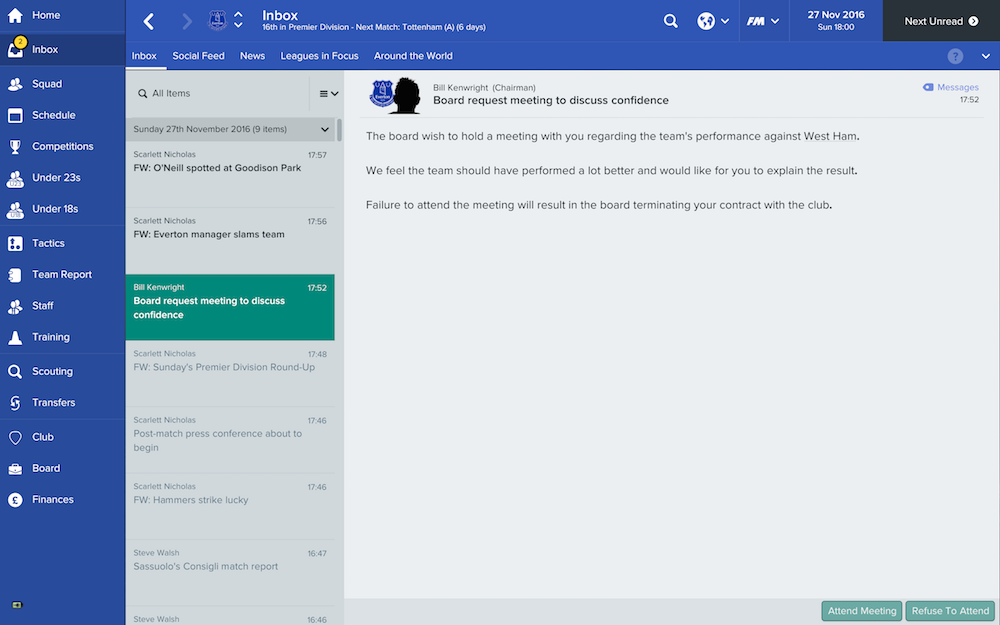 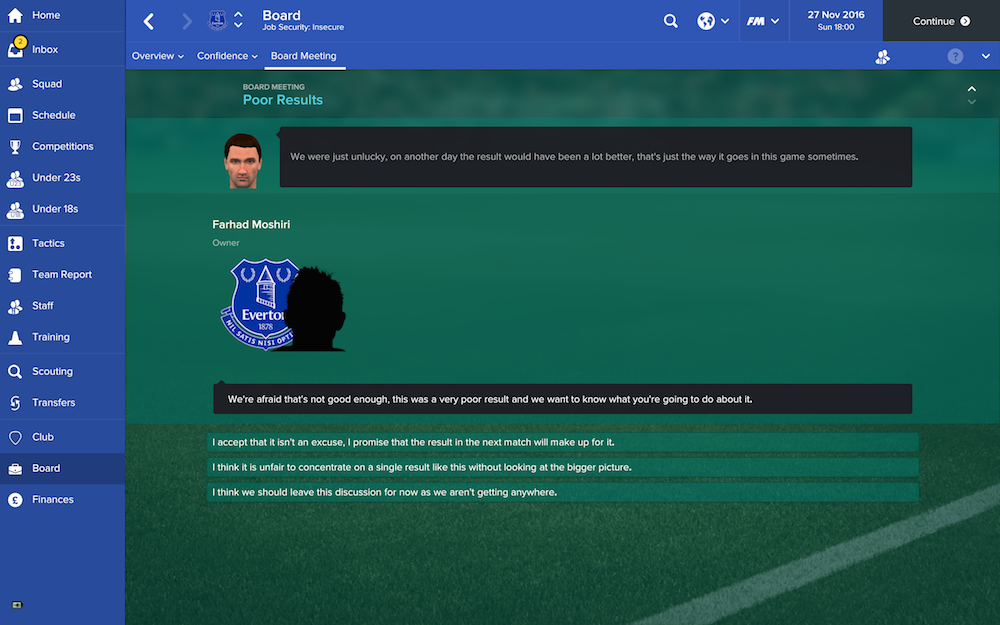 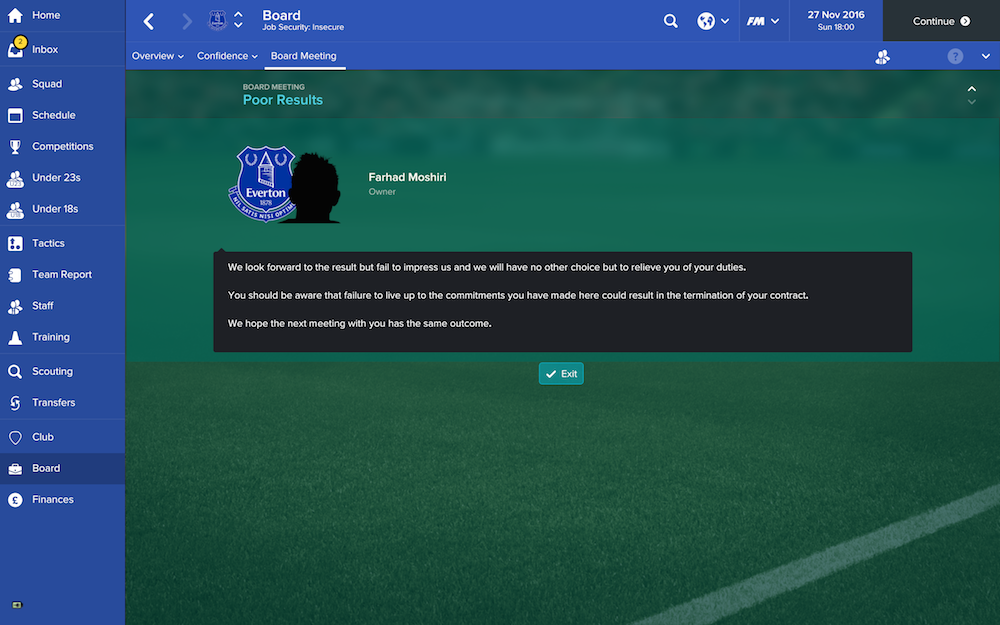 I have one game to save my job. I have put approximately 40 real hours of my life into this. Long train journeys, mornings in the cafe, evenings on the sofa, one bit of scouting on the loo, and already I’m fighting to survive. This really doesn’t reflect well on anyone.

Oh, and my next opponents? Champions League chasing Tottenham Hotspur. AWAY. 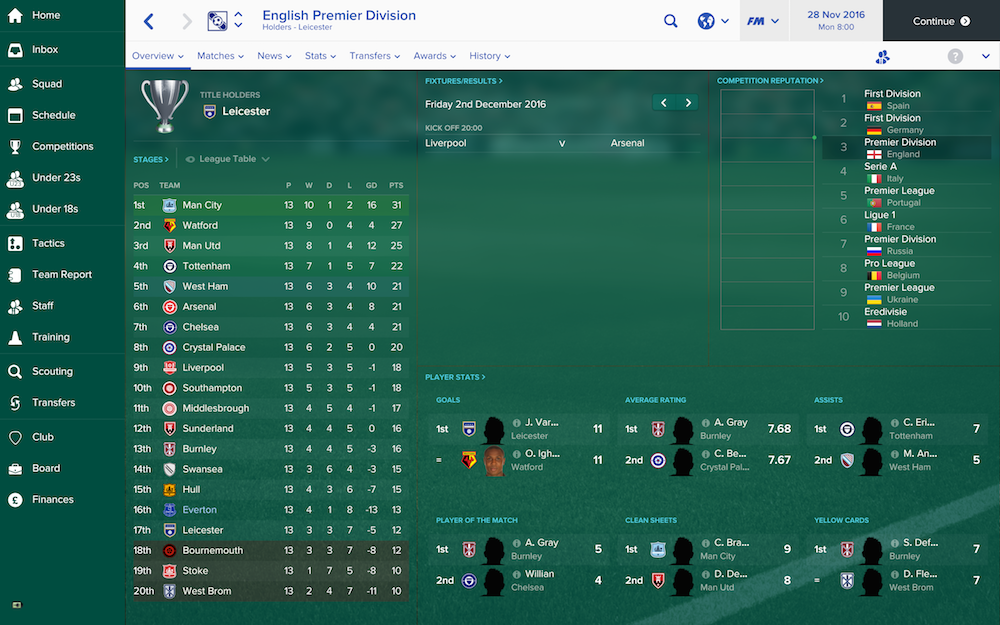