Well, I can’t buy new players yet, but I can certainly make sure I keep hold of the ones I’ve got. I’m delighted to announce new long term contracts for Ross Barkley and Romelu Lukaku. Both men are wanted by the very best teams in Europe. Both have somehow been convinced to stick around here.

This is a proud moment for the club, a sign that we will not be bullied by those around us. A sign that we reject the notion that we are a selling club. A launchpad from which we can soar to new heights. Naturally, there are groans from Everton fans on social media that I’m an idiot and I’ve made the wrong decision in nailing down two of Europe’s most promising talents. I am growing to loathe humanity. 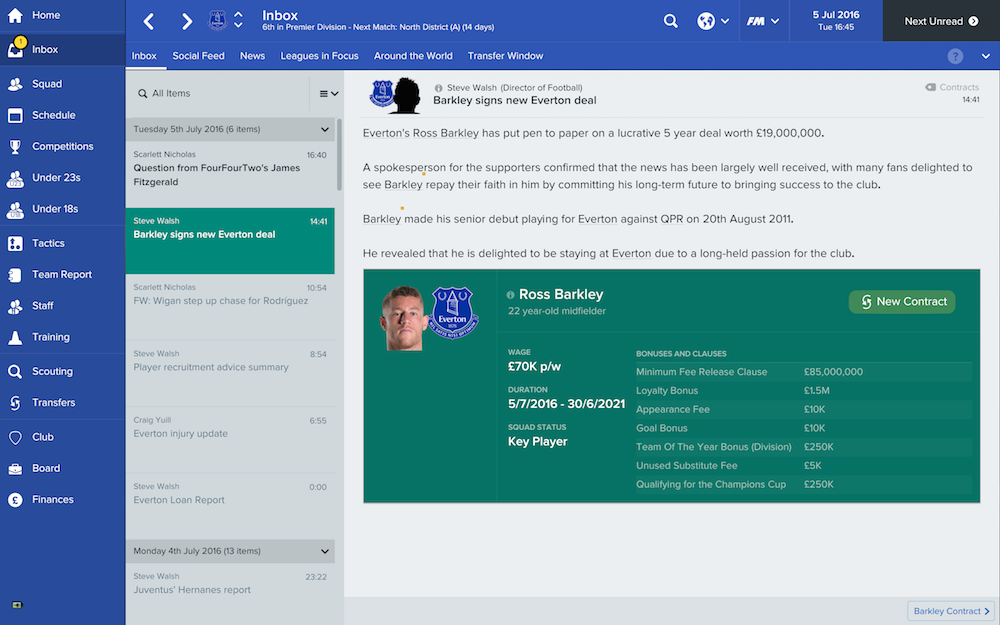 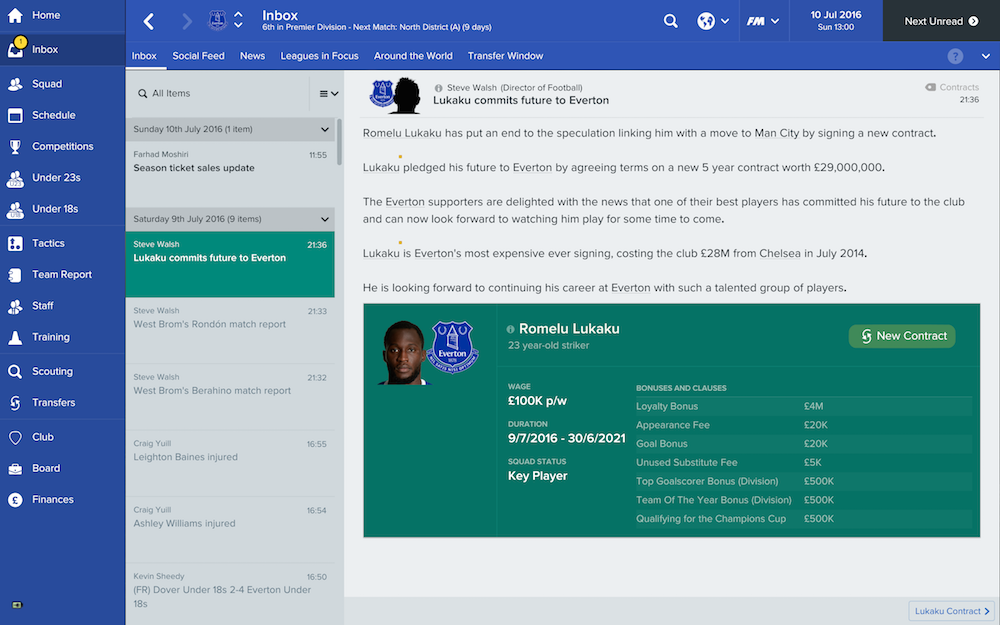 The real work begins now. A Saturday morning train journey to Manchester is the perfect opportunity to work on individual training routines. Every player at the club, including the youth team, is assessed, catalogued and given their own programme. Even the players who have as much chance of breaking into the first team as Bill Kenwright are looked after, in the hope that they’ll be able to forge a career away from Goodison Park. Because I’m like that. I’m a giver.

The scouts are given extra duties too. Even though we can’t sign a player until January because the budgets are disabled, there’s no reason why we can’t lay down the groundwork. I want to know about every player in the game. We can’t buy the best, but we can buy the ones who are nearly there and push them over the edge. This isn’t about the next game. This isn’t about the next month. I’m playing a ten year game here. Of course, if I get sacked before Christmas then all this is meaningless and I’ll look back on this train journey with a pang of regret. I could have read a nice book instead.

But as soon as I’m finished at Finch Farm and I press continue, the trouble starts. Players are dropping like flies. All I did was push team fitness training to high, but I seem to have killed them. As the first friendly approaches, I’m without Ashley Williams, James McCarthy, Seamus Coleman, Leighton Baines, Darron Gibson and, most alarmingly Maarten Stekelenburg. 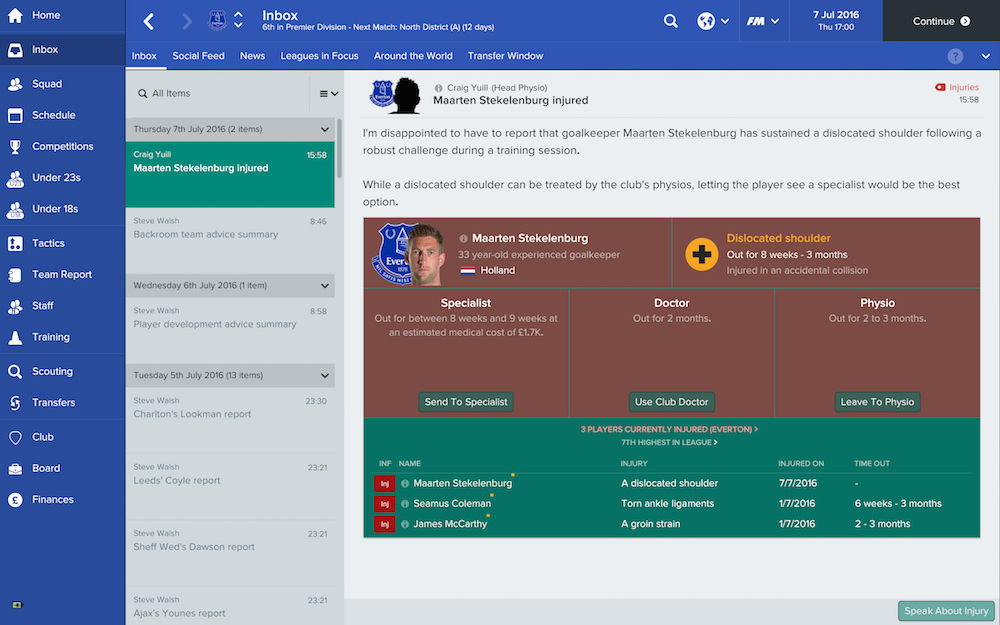 I added this North District fixture to the Hong Kong tour itinerary in a moment of fear that we didn’t have enough games scheduled. Of course, this was back in those sweet innocent days when we had hardly any injuries. But it will be nice to road test my new formation.

It’s pretty simple really. I’m putting my faith in my footballers to play football. They look to control the game, closing down lots when out of possession, playing at a high tempo, but roaming from positions and expressing themselves. The full-backs have licence to get up the pitch, Idrissa Gueye and Gareth Barry provide a two man shield in their absence, Kevin Mirallas cuts in, Yannick Bolasie goes wide, Ross Barkley gets to run with the ball and Romelu Lukaku can do whatever he likes.

Yes, it’s a little risky. No, we might not play like this against Manchester City on the opening day of the season. But this club needs an identity. And I’ve chosen one that is so sexy I think it just made me pregnant. 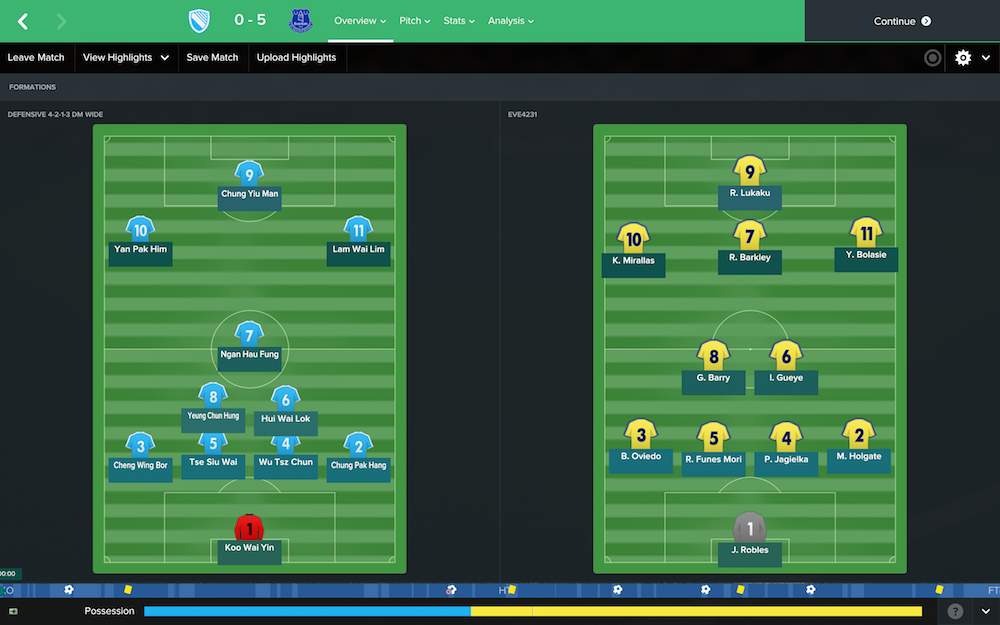 We win, of course we do. They are not very good at all. But we win with some style, making over 30 chances and scoring five times. It’s a very relaxing watch. Unfortunately, this session comes at a cost. We lose Bolasie to a hamstring injury. But he won’t be out long and Deulofeu certainly took the opportunity to step into his shoes. Lots of shots, lots of goals. It’s the Everton way. Or at least it will be by the time I’m finished with this lot. 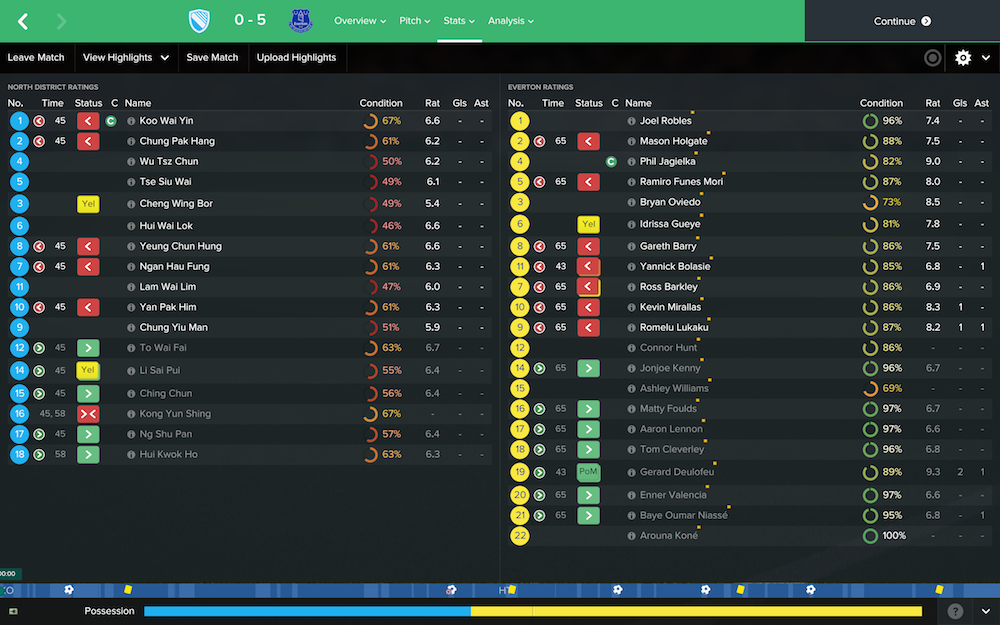 KV Mechelen offer a very different sort of challenge. They play in a 4-2-3-1, just like us, and they actually play in a decent league at a decent level. I mean, we should still win and win well, but it’s a step up from those nice, obliging young men at North District. 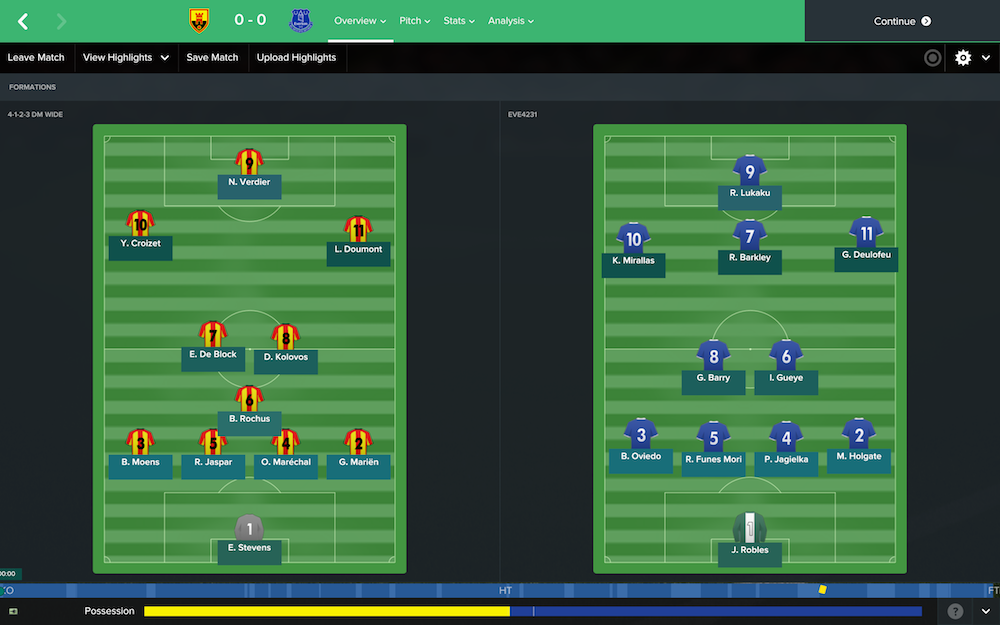 Well, it’s nice to know that you can change the story, you can change the computer and you can change the game, but some things stay resolutely the same. We had all the possession, almost all of the chances and we still didn’t win. That in itself shouldn’t be too surprising. We’re playing with unfamiliar tactics and it’s early pre-season, but it would have been nice to see at least one goal. I’m not sure about Romelu Lukaku at the moment. I thought it best to give him the freedom of the complete forward role, but I’m not seeing the benefit. It’s early yet, so no need to panic, but I’ve got my eye on him.

The other issue is the midfield. With Idrissa Gueye and Gareth Barry both set to defensive duties they spend most of their time behind the play. This much I expected, they’re supposed to be providing a shield to the centre-backs. But that can leave the front four a little isolated, leaving us looking like two teams in the same colour shirts. The early change and the use of Tom Cleverley as a box-to-box midfielder helped to fix that, but we still didn’t win. 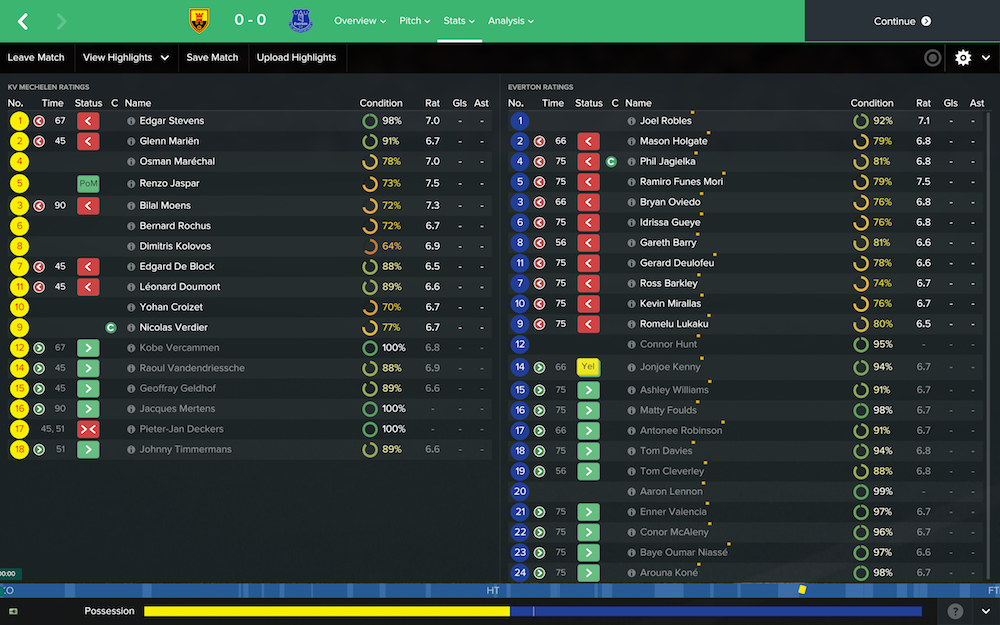 But it’s not all dispiriting news. Manchester City have cooled their jets on Deulofeu and so he’s decided that he’s actually quite happy at Everton anyway. Good for you, Ged. I never doubted you for a moment. You fucking snake. 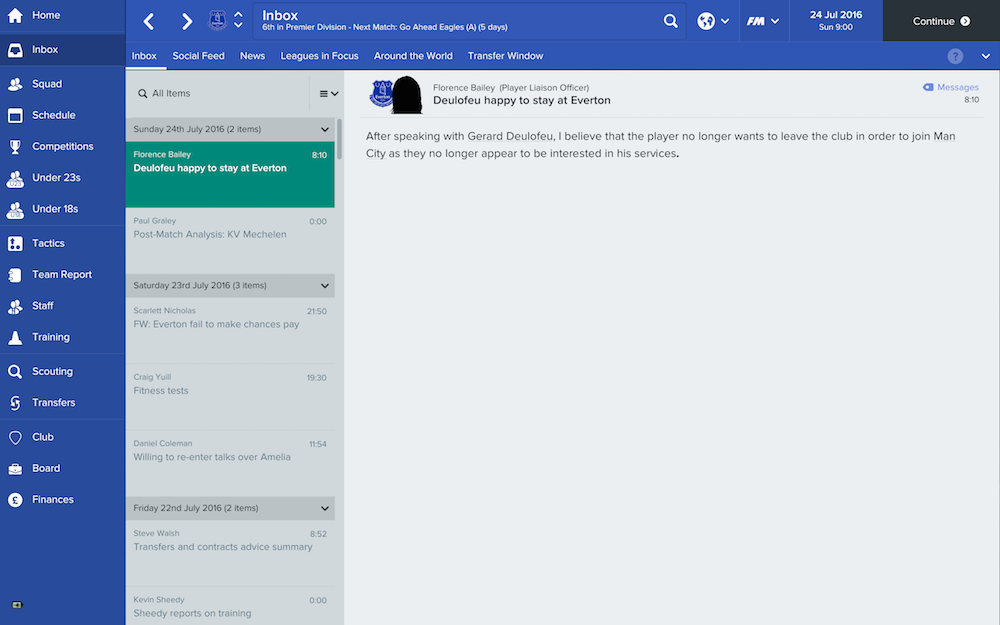 The first and last time I watched Go Ahead Eagles play was way back in 1994 when Eurosport televised their obliteration at the hands of That Ajax Team. Poor old Go Ahead Eagles, I thought as the combined might of Edgar Davids, Marc Overmars and Patrick Kluivert took them to the cleaners. And then they passed out of mind, sporadically appearing alongside the likes of Hearts of Oak and Young Boys in the Wankdorf Stadium whenever a conversation about amusing football team names cropped up. Anyway, we’re playing them. 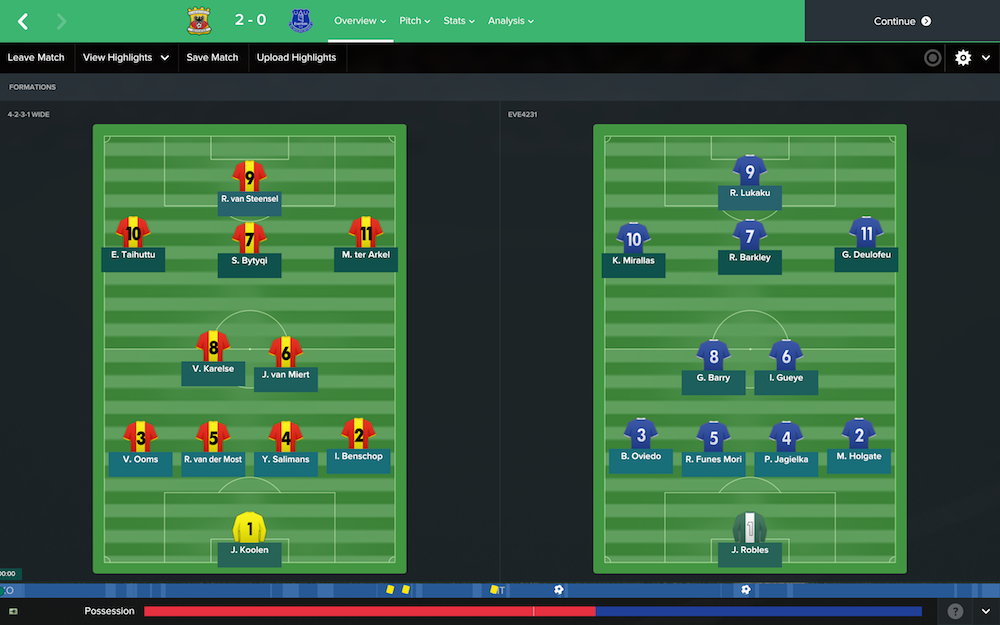 I probably should have made sure that my preparation consisted of more than just giggling at their name. There may be times in the future of this feature when I make excuses for the poor performance of my players, so I want everyone to be quite clear about this: We just got battered by Go Ahead Eagles and it was entirely our fault. I have never seen such a catalogue of unforced errors in all my days and I must stress again that I’m a Southend United supporter who used to watch Newcastle and Sunderland regularly.

Despite being under orders to control the game, we ended with 40% of possession. Lukaku was absolutely hopeless, failing to hold up the ball, run with the ball or put the bastard thing anywhere near their goal. I gave them an hour and they were diabolical. Then I subbed off every outfield player and they were still diabolical. I feel physically sick. If they play like that against Manchester City, we’ll get obliterated. I want to travel home separately. I don’t want to be on the same plane as these people. I want to sit in a bar and smoke a lot and then make my own way back on a ferry so that I can stare at the darkened skies and look moody and troubled. Jesus Henry Christ, this fucking football club is the bane of my life. 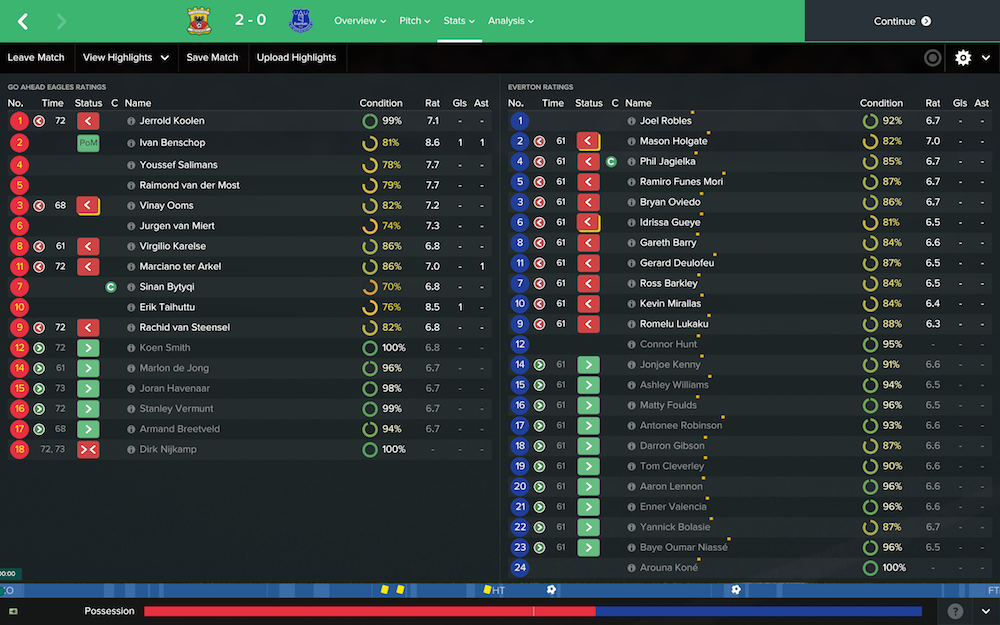 To make matters worse, we’ve lost Brian Oviedo to a long term injury. Ordinarily, you’d like to consider that the kind of blow you could easily shrug off, but Leighton Baines is out too so it’s either Gareth Barry at left-back or I have to use the not-even-nearly-ready youth graduates. Of course, if we had Brendan Galloway or Luke Garbutt this wouldn’t be a problem, but my predecessor decided to send them both out on loan and I can’t get them back.

Still, let’s try to move on from what happened in Holland. I mean, granted, we have absolutely no positives to take from that shambles, but it’s only a friendly. It’s only a friendly. Perhaps I’ve over-reacted. Perhaps it was just a bad day. We’re the opposition at Wayne Rooney’s testimonial now, so a game against Manchester United should give a more accurate impression of where we are. Same sort of team, same sort of tactics. Let’s find out what our level is. 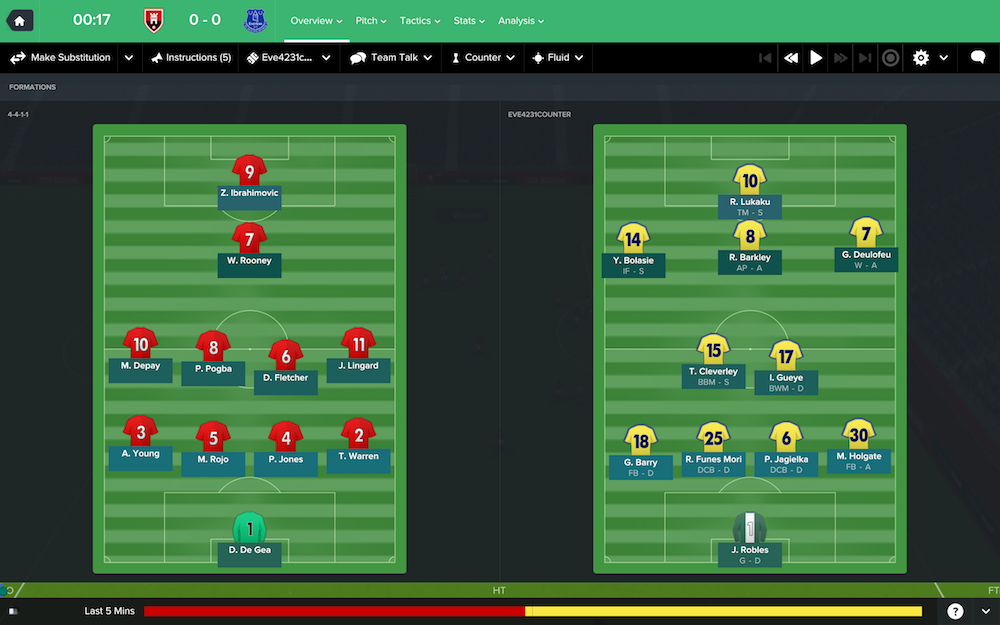 Oh my God, we’re doomed. We have an encouraging first half, a few chances here and there, but then United wake up in the second half and score three times in ten minutes. Zlatan Ibrahimovic, another of my old friends from an alternative dimension, bullies Phil Jagielka, rising above him twice for his brace and doing it again to set one up for the man of the hour, Rooney. By the end, we look punch drunk and fortunate to have kept the score down. In three games with a formation designed to open teams up like cans of beans, we’ve failed to score a single goal. Back to the drawing board.

For our final friendly, which requires another flight out to Hong Kong and if I find out who organised this schedule I’ll take their ears as trophies, we play South China. I am terrified about our opening league fixture against Manchester City now. I recognise that I must have different formations for different games, I acknowledge that South China is not an opponent that would ordinarily warrant a packed midfield, but I need to get them used to this shape. I need to avert disaster. This is ridiculous. The season hasn’t even started yet and I’m getting stress-induced stomach aches. 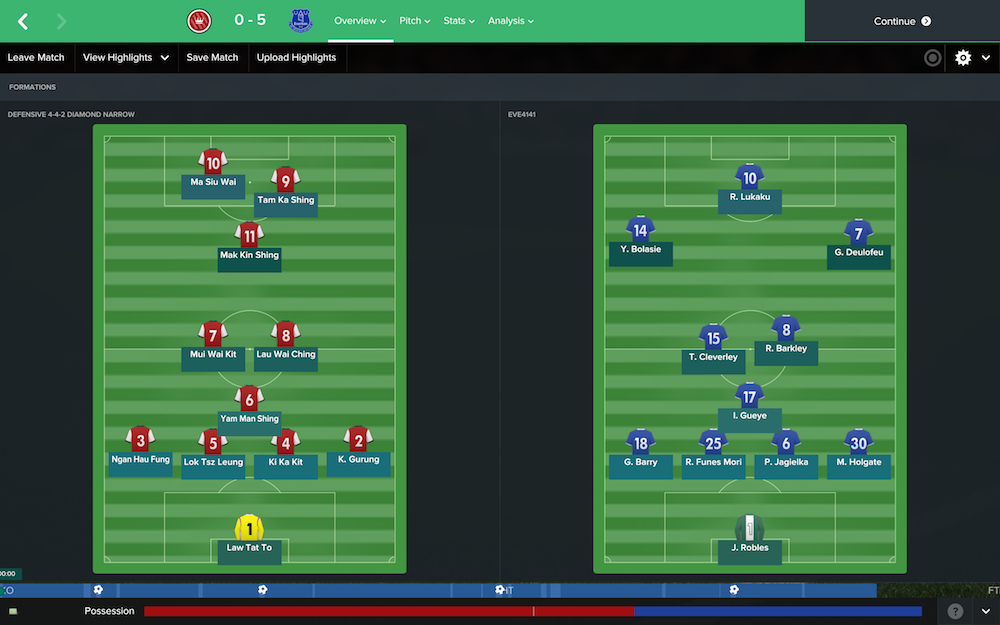 Well, the players seemed to enjoy themselves. Morale is pleasingly high and yadda yadda yadda. None of this means anything. It’s one thing to beat an obliging opponent on tour. It’s another to hold out against Manchester City. But let’s look on the bright side. We weren’t humiliated. I might get that put on a t-shirt. 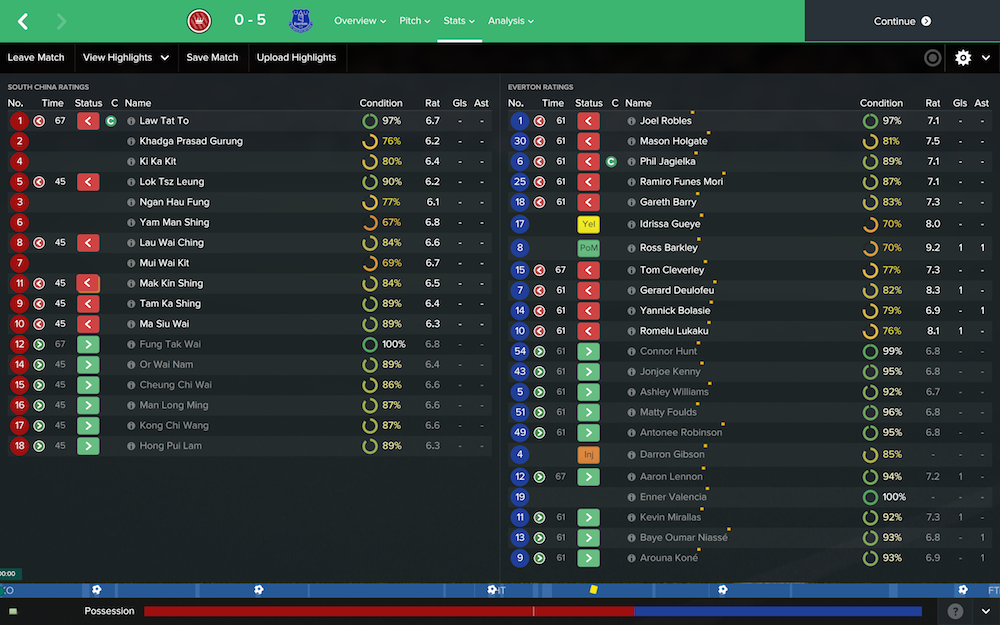 I wish we had someone else in the first game. Manchester City are really good at football. That doesn’t seem fair somehow.

The bookmakers have announced the odds for this season. It’s reassuring to see that our tone-setting, confidence-defining season opener is against the 3/1 favourites. Thanks for that, fixture computer. I can’t help thinking that the bookies are a little optimistic though. 33/1 for the title after what happened in Holland? If I was a betting man, I’d be considering the 30/1 shot below… 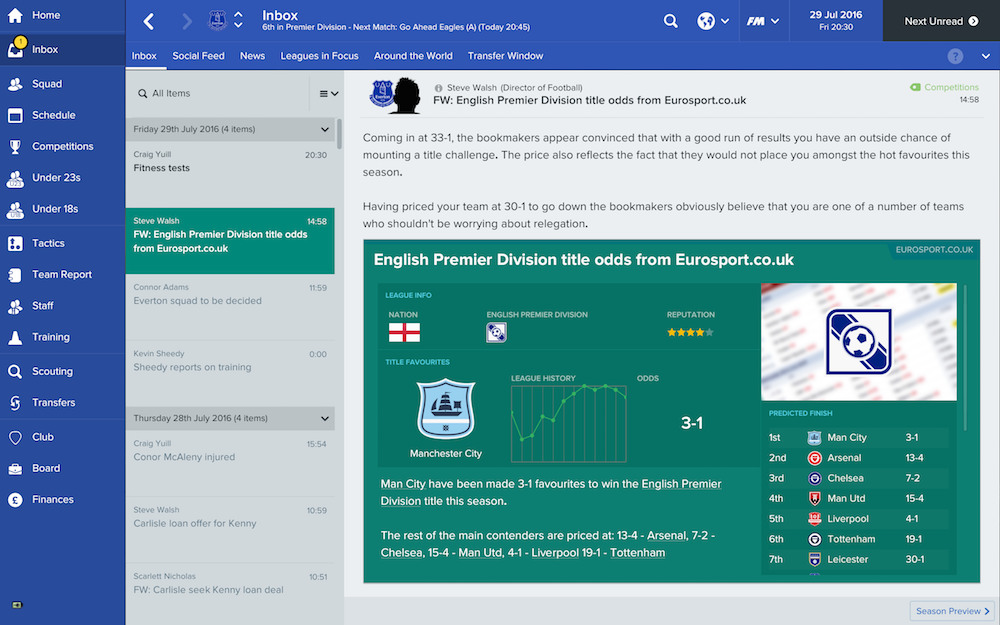