The draft is over, the players have been selected and our seven squads are in place for the FM20 Project: The Coaches competition. We’re pitting six qualified coaches from clubs including Chelsea and West Ham against new editor, Chris Evans, in a new Football Manager challenge like no other.

The seven squads have been created using FM20’s fantasy draft, with each manager given £500 million to select a side from players who ply their trade in the top divisions of Europe’s elite leagues – England, Spain, France, Germany and Italy.

Every team will play each other twice in a mini league, with the top four qualifying for an end-of-season play-off to decide the ultimate champion. You can keep up with every twist and turn of the competition on The Set Pieces. But for now, here are the squads that will be vying for the prize.

While things might not have been going particularly well off the pitch for Bolton Wanderers in recent years, Cooper has fared better on it. After joining the Trotters in 2017, Cooper is working his way up the ladder at the University of Bolton Stadium, where he now works as a foundation phase coach alongside being a first team analyst.

Hirst is another man who can count an impressive string of clubs on his CV. Currently a coach with West Ham, he’s tasked with providing a link between the Hammers’ foundation and academy. In the past, Hirst has also spent time at Southampton and Chelsea, and got some added experience coaching in non-league with the likes of Hornchurch and Brockenhurst.

Cole is on Chelsea’s books as head coach of the club’s International Development Centre in Bangkok and appears to be a man on an upward trajectory. After starting out as head performance analyst for Reading’s under-18 side, he’s spent time at Cardiff City and two other roles in California. If that wasn’t enough, he’s also got a UEFA B Licence.

A coach that’s as used to globetrotting as he is being on the training pitch, Garbar has worked in a host of nations, including Ukraine, USA, Germany and England. The UEFA A Licence coach last worked at Benfica in Portugal and despite clocking up plenty of air miles on his career journey, the Ukrainian still found enough time to feed a Football Manager addiction that’s spanned more than a decade. 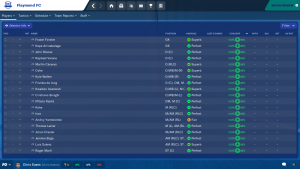 A current under-18s coach at Scottish Premiership club Kilmarnock, Clark is representing the Tartan Army in our competition. UEFA A Licence holder Clark’s Killie youth side are currently unbeaten in 15 games, have reached the Scottish FA Youth Cup final for the first time in 16 years and recently helped teenager Liam Smith earn a move to Pep Guardiola’s Manchester City. While Clark is based in his native Scotland now, he’s also spent time working in China and Canada in the past. 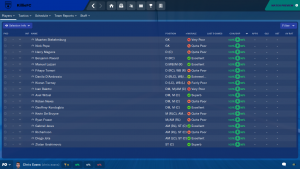 When Phillips took over non-league Romsey Town in 2014, the then-22-year-old became the youngest ever manager to take charge of a team in the FA Cup when the Wessex Leaguers kicked off their cup campaign. The self-confessed Football Manager addict has since gone on to manage a few other clubs in the south west and is currently head honcho at ninth-tier AFC Stoneham, who were sitting second in the table before the season was halted in March.

The new editor of The Set Pieces has an expired FA Level One coaching certificate from when he was a teenager and has little in the way of credentials on or off the pitch, although he’s spent plenty of hours on Football Manager to make up for it. Under-qualified in the current company? Yes. Without a hope? Well, maybe.