Nigel Farage has probably never played Football Manager. I don’t know about you but I can’t imagine the former UKIP leader settling down in front of a screen for an FM session, despite being outed as a Crystal Palace fan a few years ago.

Yet, it’s a tactic inspired by Farage that I hope will provide the thrust I need to push Tromsgodset Pieces towards a top-four finish and a play-off spot.

When I first heard of the Brexit tactic during a chat with FM expert Rob Roberts-Facey, I thought it was his subtle way of telling me that I should quit the league in a blaze of brashness and declare it was better if I played on my own.

Instead, the approach he explained was more akin to something spoof England manager Mike Bassett might play: “We’ll be playing four four fucking two.”

Rob explained a number of tactical ideas to me during our chat in the last episode, but it was Brexit that spoke loudest to me.

The plan relies on pace, something several of my players have in abundance, provides a steady base at the back and moves the ball quickly to the frontmen to pose a threat ourselves.

Striking this balance has been my biggest issue and even though my results have been picking up of late, I don’t look much like scoring enough to win too many games.

My next fixture is against Flaymond FC boss and ex-Benfica coach Konstantyn Garbar. Yes, he of the 6-0. What could possibly go wrong by trialling a largely untested tactic against this lot?

If a change in style after a few more signs of life recently was bold, perhaps my next decision was even more foolish. I was going to drop Harry Kane.

The England captain may have been my first pick, the most natural finisher I have and a leader on the pitch, but he’s not quite Brexit enough for me. By that, I mean he’s just not quick enough to provide the outlet I need by knocking the ball long over the opponents’ back line.

And believe me, the irony of dropping the England national team captain as I move to a Brexit system isn’t lost on me.

In his place would come Tammy Abraham, who boasts acceleration and pace stats of 16 and 15 respectively. I’m pairing him with Mo Salah, who is so rapid I’m a little bit frightened of what he might do if he’s chasing on to long balls all afternoon.

Pace is the order of the day on the wings too, with Marco Asensio and Martin Odegaard getting the nod to fill those wide berths. Neither is fully comfortable in those positions, but the Brexit moniker is ‘pace over all else’ so they’re in.

Removing focus from the middle of the pitch seems a wise move against Flaymond. When we met the first time around, their midfield three dominated mine and with Jordan Henderson suspended for this game, my midfield of Francis Coquelin and Federico Valverde looks decidedly weak against Koke, N’Golo Kanté and Frenkie de Jong. 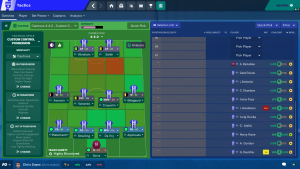 Aside from the new tactics, the form table provides me with some crumbs of comfort. Flaymond have lost three on the bounce coming into this one and despite all the illusions of hopelessness I give off, we’re currently unbeaten at home.

The lads enter the pitch bursting with motivation after I remind them of the humiliation they suffered last time we faced today’s opponents, although the tightening of my stomach as we concede possession easily in the first highlight tells me I’m not as chilled as I’d like to think.

As I reach for Alka-Seltzer to settle my nerves, something even better happens. César Azpilicueta takes a throw deep in the Flaymond half and plays a one-two with Salah, before whipping in a cross for Abraham to head beyond Kepa Arrizabalaga for 1-0. Cue a howl of celebration.

If the goal wasn’t encouraging enough, the next half hour is like a TED talk on heat. Highlights come and go of Flaymond attacks being repelled by my backline or petering out with long-distance shots or hopeful headers providing little threat to our goal, while Chris Smalling goes close himself after getting on the end of a deep free kick.

I know this can’t last forever and when Luis Suarez is played through on goal towards the end of the half, I forget to breathe. I can only imagine I’m starting to turn a funny shade of red as Soria hurls himself at Suarez’s feet to stop the Uruguayan from registering.

It seems to have spurred Garbar’s troops on and within minutes of the Suarez chance they have the ball in the net, Julian Draxler flicking on a corner for Isco to bundle in at the far post.

“THAT HAS TO BE OFFSIDE, OFFSIDE, OFFSIIIIIDE,” I yell, going up several octaves as I desperately look for the linesman’s flag. Thankfully, it appears before I have an aneurysm. It remains 1-0.

I don’t want to mess too much with my side at half-time but decide to go a little less direct for the second half. We’ve only had 44% possession in the first 45 minutes and don’t want to be left camped on the edge of my own box as Flaymond inevitably turn the screw.

Aside from a Suarez header that flashes past Soria’s far post, we remain pretty untroubled and Salah should have doubled our lead when a swift counter-attack sees Abraham slot him through on goal, only for Kepa to tip his effort wide. Ever the pessimist, I fear we’ll live to regret missing such a good chance.

And true to form it happens almost immediately, as the resulting corner is moved quickly forward, catching us upfield, but De Jong skews his effort wide when he looked odds on to score.

As the clock ticks by, I start to feel the pressure. Wisdom suggests there’s no need to change too much if nothing much is happening in a game, but the clock in the top-left is causing me to have anxiety. I swap Asensio for Gerard Deulofeu simply to bring on some fresh legs, then bring on Kane for the final 15 minutes, putting Salah on the right for no real reason other than that I could.

As we enter the 83rd minute, the status quo appears to remain until a Deulofeu corner is flicked on by Stefan de Vrij into Abraham’s path who puts the ball in from a few yards out. But the goal is instantly ruled out for offside in one of the tightest possible calls. I’m now convinced there’s a sucker punch coming.

Garbar takes his time to make his last throw of the dice. I start to panic in the way only I could. What should I do? How can I counteract the tactical change that’s happening? Why wouldn’t it be a good idea to use my third sub?

I turn to Leander Dendoncker and summon him. I want the Belgian to come on for Salah to drop as a defensive midfielder, leaving me to inexplicably move Kane to become a right winger. I know this is a bad idea as I’m doing it but tell myself this is just good management.

I just keep walking towards the flames.

The change only serves to leave us hanging on even more as stoppage time begins. With less forward impetus, I’m inviting pressure. So when Smalling surrenders the ball with an aimless pass, my heart sinks.

The ball is lofted forward and flicked on, only for Plattenhardt to hack clear. Flaymond get possession again and push it forward, this time Deulofeu cuts it out. Then the whistle goes, we’ve won! 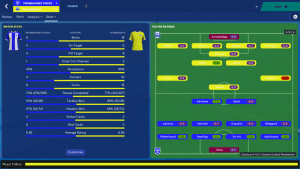 I’ve had 45% of the ball, have faced 18 shots to my nine and spent a lot of time in my own half, but Brexit appears to have worked. That said, it’s now four matches unbeaten at home, so I’m not wholly convinced if it’s the new tactic just yet. The true test will come when we play away.

But I know that in a big mansion somewhere, a man with a funny grin, an inflated sense of self-worth and a Union Jack on the wall is claiming this as a victory for Brexit. This one’s for you, Nigel! 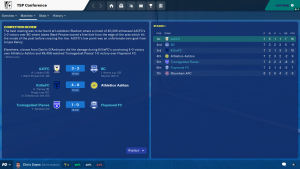 Catch up on any episodes of the FM20 Project you may have missed only on The Set Pieces, with updates coming every Monday.