Some of the greatest managers needed a turning point to change the course of history. Sir Alex had Mark Robins’ goal, Graham Taylor had Ronald Koeman’s foul and Big Sam had a pint of wine.

All were seemingly minor incidents that ended up altering the trajectory of football history. Moments that, as they happened, couldn’t possibly signal the butterfly effect they’d have.

So when Sergio Romero spilled the ball into Harry Kane’s path so he could slot home the winner against Stoneham AFC, I was hoping that was my turning point. And with any luck, it won’t end with me waking up in the middle of the night in a cold sweat, regretting my actions like dear old Mr Allardyce.

The manner in which I secured my first victory as (S)Tromsgodset Pieces boss wasn’t quite the swashbuckling style I’d envisaged when we dreamed up the concept of the competition.

Instead, it was decidedly low key. We were tough to beat and edged the contest by virtue of a goalkeeper error. But if it breathes new life into my ailing campaign, I’m not being picky.

Of course, this could all be another false dawn. And after getting a bit giddy after earning my first point, I’ve learned my lesson and won’t be getting ahead of myself again.

We’ve struggled to compete in either of our two away matches so far, conceding an eye-watering 57 shots, 34 of which have been on target and shipping eight goals.

So as the team board the bus for our away trip to AJCFC, I make sure to check with the driver that he knows to park in the opposition goal mouth and leave it there until the end of the match. We can’t afford another car-crash performance.

There’d be no more grand plans of buccaneering victories. If we could escape with a 0-0 to stop our run of heavy away defeats, I’d be satisfied.

Facing six real-life, qualified coaches was never going to throw up any gimmes, but it’s going to be another tough trip. AJCFC are managed by Bolton first-team analyst Adam Cooper and have made a solid start – only losing one match in the opening weeks. 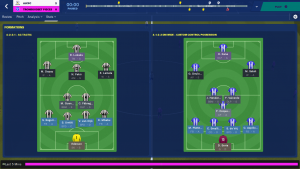 I’m not confident in my ability to tweak tactics without completely ruining what worked before, so I decide to stick with the winning formula from the Stoneham match. My only changes are bringing Francis Coquelin back into the team after suspension and replacing Junior, who himself is serving a one-match ban, with Marvin Plattenhardt.

The first half whips by in a flash as my lads chase, harry and battle for every ball. We’re looking pretty solid and aside from a single Romelu Lukaku effort, we’re limiting AJCFC to long-range pot shots.

The only blot on my copy book is that we’re creating very little ourselves, which is only exasperated when Mo Salah picks up an injury just before the break. But since we’re normally dead and buried by this point, even that can’t dent my positivity.

Then in the 52nd minute, the moment arises. I’ve been playing for set pieces and when Plattenhardt whips in a free kick towards an unmarked Harry Kane, I can scarcely believe my eyes. But just as I watch the ball sailing past Ederson, the Brazilian jolts up an arm at the last minute to tip it over. I slam back in my seat with a bang.

The significance of the moment is that it sparks Cooper into action and after a few changes, he starts to put more pressure on David Soria in my goal.

Predictably, I fail to react to keep the trouble away. So while Soria is leaping around like a demented flea to keep shots out, it only takes one slight error and he’s beaten by Sadio Mane’s low effort. We’d lasted 72 minutes.

I immediately push Tammy Abraham up front to support Kane, but my efforts to get back in the game are futile. I’m wide open at the back again as Mane first hits the bar with a header and then provides the space for Sergio Reguilón to fire in a second.

Despite the disappointment at losing 2-0 and Kane having a goal ruled out for offside late on, I’m encouraged. Even if I’m resigned to the fact I may never be able to attack at risk of being overwhelmed ever again. It seems defending in numbers is my best suit, but that isn’t about to get me goals. There lies the rub.

But after being more competitive, I decide to stick with the same approach for my next match against fellow strugglers KillieFC, who are managed by Kilmarnock under-18s coach Craig Clark. Despite taking the lead in several games, Clark’s team have struggled to make that count and are one of the only reasons I haven’t been bottom of the table every week.

My only change is enforced, with Salah’s injury and Marco Asensio’s suspension mean I draft Martin Odegaard in on the right flank to maintain the same shape.

Unfortunately, my instincts to be tighter at the back appear to be mirrored by Clark, which means the highlights mainly consist of corners being cleared, well-timed blocks and our teams passing the ball neatly in the middle of the park.

One of few moments to set my (or anybody else’s) heart racing sees Kane race clear of the Killie back line and slip a ball underneath the onrushing Nick Pope, only for the keeper to almost fall on the ball and divert it on to the foot of the post.

A classic this ain’t, but neither of us seems willing to change dramatically. A point isn’t a lot of good for either team based on the starts we’ve had, but a defeat is a whole lot worse.

With time running down freely, my assistant nudges me as I begin to drop off in the dugout. It seems the sound of snoring can be heard coming from the stands too and he feels I should at least show willing by making a change.

I decide to go two up front and create a diamond in midfield, dropping my wingers to become narrower. If my full backs can provide width when I have the ball, I’m hoping this is the sort of ingenuity that will be rewarded.

I make the changes on 66 minutes… and the next highlight doesn’t arrive until 78. And it’s a Killie attack that eventually peters out. Quite frankly, that pretty much says it all.

The game ends goalless and I’m left feeling conflicted. The way we’re going, we may avoid finishing bottom, but the league table highlights that simply nullifying teams and aiming to grab a lucky goal at the other end isn’t going to get me in the play offs. 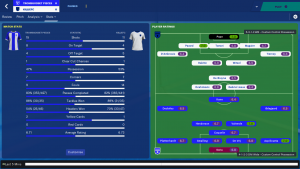 Balance is the key, but the door to that silver bullet appears to be wedged shut. If I attack too readily, my opponents pick me apart, but if I’m too defensive, almost any hope of scoring goes out of the window. 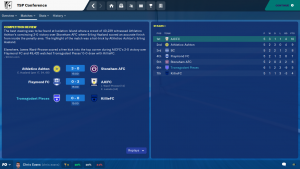