I once had a friend who shirked a night out because he’d discovered an army of ants in his house.

A number of us were together when the message arrived describing his plight. Reportedly, there were hundreds of the little buggers, swarming around.

As a result, he couldn’t possibly make it. Presumably, he’d be cutting pieces of garlic and sprinkling salt strategically around his skirting boards until the small hours.

I’m telling you this tale because it stands out as one of the more unusual – and weakest – excuses I’ve heard. Creative? Yes. The truth? Very possibly. But a bit of a cop out? Most definitely.

So as I face up to the underwhelming start Tromsgodset Pieces has made to the FM20 Project campaign (and not to mention the uneditable spelling error that has seen the team drop an S from the start of its name), I start running through all the possible scenarios I can use to explain the problems I’ve had.

The trouble is, it’s a level playing field and I have to take full accountability for our struggles. These are my picks, my tactics and my responsibility. 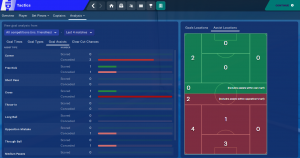 We’ve got one point from three games, have conceded 10 goals and scored only twice. And it could easily have been a lot worse.

The good thing about accepting where you’ve gone wrong is that it gives you a springboard to put those mistakes right. And that meant putting in the hard yards to understand how I could stop the rot.

After rewatching my three matches so far, I could clearly see the error of my ways. The easy summary is that I’ve been too naive, which has made me an incredibly soft touch. Chances have come too easily against us and I’m relying on luck to stay in games.

The first decision I have to make is obvious: I need a defensive midfielder. Aside from the comeback against Athletico Ashton, I’ve enjoyed my least-worrying spells with Francis Coquelin providing a screen to my defence and breaking up play. The idea of a number 10 is great, but it’s no good if we’re constantly pegged back in our own half.

Of course, by the time I’ve decided this is my best option, Coquelin is suspended after picking up two bookings, so Leander Dendoncker will be brought in for his debut.

I also drop to a standard defensive line. I got picked apart when I started with a high line against Flaymond FC and was simply hanging on for dear life as I sat deeper against BC. My next plan is somewhere in between.

The highest proportion of goals we’ve conceded have been headers. And since I’m not fielding a team of midgets, it has to be down to my tactics. First of all, we’re too much of a soft touch at set pieces (maybe my mistake was advertising my biggest weakness in the team’s name) and from crosses.

My first task is to change my defensive corner routine. I’d kept the default set-up because, well, it made sense and I thought I’d only make matters worse by tinkering with it. As that plan hasn’t been going too well, it’s time for me to act. Despite all my better instincts, I decide to take my full backs off the posts in order to pack out the centre of the box in an attempt to stop the attackers getting so many headers on goal. I can only imagine what the traditionalists in the Tromsgodset Pieces crowd will say when they see nobody defending either post. 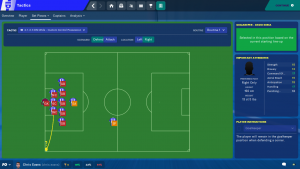 I’ve got a similar plan for defending crosses. This time, I decide to become more narrow when out of possession. While that would give the opposition more space on the flanks to get the crosses in, I’d have more numbers in central areas to deal with them.

If nothing else, I expect to become much more difficult to beat. If there’s a nagging suspicion in anybody’s minds that I’m setting up as if I was in a relegation battle, you’d probably be right. I’ve sized up the opposition and feel we’re one of the weakest sides on paper, so it’s a rational reaction.

My next game sees me face James Phillips’ Stoneham AFC. Phillips has been managing non-league sides for several years and won promotion last season – and was on course to do so again in 2019/20 before the season was stopped – so is a worthy adversary to try my tactics against. He’s won one and lost one of his two matches, so making sure I don’t lose to him is crucial so he doesn’t start to open up a gap above me.

It’s at this point that it’s necessary to point out that Phillips wasn’t going to be sitting in the dugout for tonight’s match. He’d had last-minute technical issues (I don’t think it was ants, but I didn’t ask) and despite being able to pass on some pre-match tactical and selection instructions, he’d be relying on his virtual assistant as the game got underway.

In truth, as the first half unfolded, I’m not sure his absence would have made too much difference. My game plan was on point as I successfully thwarted any attacks and left David Soria relatively untroubled in my goal. This was something I was pretty proud of because his forward line of Robert Lewandowski, Marcus Rashford and Jadon Sancho are pretty fearsome.

While staying watertight at the back was my primary concern, I make a couple of swaps in the attacking positions to inspire a performance at the top end of the pitch too. Federico Valverde comes in for Martin Odegaard as my central playmaker, while Gerard Deulofeu takes the left-wing berth.

Valverde’s inclusion appeared to be a positive one, with Mo Salah the main beneficiary of his play. The Uruguayan plays Salah through on goal within the opening moments, only to be denied by Stoneham keeper Sergio Romero. The combination links up again as the Liverpool forward slams an effort into the side netting and I’m starting to feel good about my changes.

Despite those chances, we’re far from expansive. But as the first half meanders on, Salah finds space down the right again and as Romero can only pad the Egyptian’s goalbound strike back into the danger zone, Harry Kane pounces to net his first goal in a Tromsgodset Pieces shirt. I don’t care about style right now, I’ll take goals any way they come.

That sentiment extends to getting a win too. The second half is even less eventful than the first, with the match reaching the 70-minute mark with little incident. Stoneham’s virtual assistant introduces Callum Wilson to move to a front two and while I bring on Marco Asensio and Marvin Plattenhardt, not a lot changes.

A terrible second period only has three efforts on target. Salah has one that’s straight at Romero, then Mathias de Ligt and Sancho repeat the trick at the other end by firing directly at Soria in stoppage time.

They’re Stoneham’s first shots on target in the entire game. It may not be the sexy football Ruud Gullit once so famously promised Newcastle fans in the late-90s, but it’s bloody effective. And that’s my type of sexy right now.

As the full-time whistle blows, I unleash a fist pump in self-congratulation. It’s the fist pump of a man who knows he’s sold his soul to the devil for three points. I just know Messrs Pulis and Mourinho are going to be beaming with pride to see pragmatism so well rewarded.

Some people might claim a victory achieved by turning to such turgid tactics isn’t one to be celebrated or that it’s a bit hollow because Phillips didn’t make it into the dugout. But to them I’d say, I don’t care. Getting a first win on the board is far more important than any of that.

There’s a winner’s mentality if I’ve ever seen one. 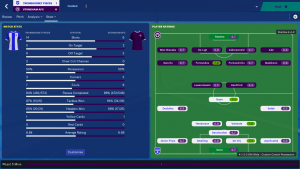 “I didn’t start the campaign very well, although I was scoring and taking the lead in games, so I felt I had something good there.

“I wanted to retain my philosophy of keeping possession but also being deadly on the counter-attack, so I started there and thought about making slight changes rather than big ones.

“When I was doing the draft, I’d thought about signing players who could play in various positions and shapes, as well as getting the most out of my best players, Kevin De Bruyne and Zlatan Ibrahimovic.

“The biggest change I made was to go to a 3-5-2. I tweaked set pieces and my counter-attacking style, and it seemed to work. The five at the back are more stubborn and hard to break through, which is what I wanted. I was keen to have two strikers playing; firstly, so I have more bodies in the box when I attack and secondly, so it will occupy the opposition better.

“After getting my first win, I want to have slightly more possession of the ball but, most importantly, create chances and limit opponents’ opportunities. To do that, I need to be more aggressive in the wide areas. If I can achieve that, I’ll give myself half a chance.”

“The game against BC was definitely the toughest one so far. They have a really strong offensive line, so we tried to neutralise their top players, Neymar and Lionel Messi. I decided to play on the counter-attack, based upon a quick transition off the ball from our defensive line straight to the attackers, without using the midfielders.

“BC had more possession off the ball and had some opportunities to score, however, I was sure at some point of the game we’d get our chance, considering the fact they pushed forward for the whole game and used a high line of defence. At the very last minute we finally got our chance and were clinical in the final third.

“At this moment, my main goal is to finish in the top four and go through the whole distance without serious injuries and disqualifications. So far, so good.” 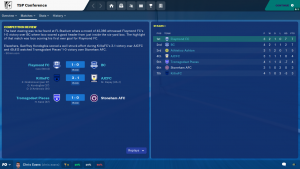