Part chess, part poker, part video game, Hearthstone has captivated over 70 million players over the last few years and has been a runaway success, its shiny graphics and accessible style making it a great way to discover the genre of collectible card games. Normally, you would construct a deck from the cards in your collection and use them to fight in a match – however, the Arena game mode turns everything around: you are forced to draft each one by one.

The question is this: how far can you go if your only goal is to hunt down your opponent? What is a deck with multiple Terminators and a bunch of piranhas capable of? And most importantly: will Bobby survive the fight?

We put together a pretty decent force in Part One, so it’s time to see how effective it is in combat. As the saying goes, no plan survives contact with the enemy, so my clever strategy is to not have one in advance. I’ll leave that to the armchair generals: I’ve got an actual battle to fight in the arena.

Besides, let’s be honest, hitting people in the face doesn’t require much serious planning. Just boxing gloves. We’ve already got those ready to go. It should be perfectly fine. 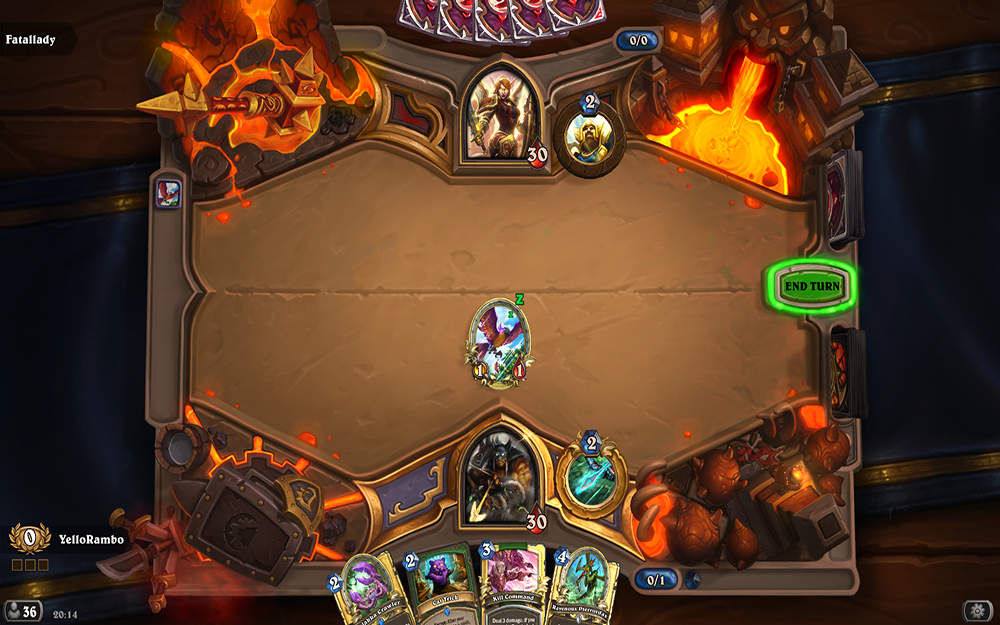 Even before the battle begins, we’re at an advantage: for one, I know that my opponent chose the ‘justice’ card I wisely discarded at the beginning of my Arena experience. More importantly, I’m going first and I have a one-cost card in my hand to play. While a 1/1 minion isn’t all that powerful, death by a thousand papercuts is just as viable a win as a giant blow to the head by one of our Terminators. Speaking of which, they are nowhere to be found. Are they in 1984 perhaps?

My opponent deploys a poisonous snail to stop me. While it is certainly dangerous, it really isn’t fast enough to pose a real threat. I use the top-decked Arcane Shot to neutralize it instead of sacrificing two of my minions to take care of it. It means that my opponent could take a tempo advantage with a decent card, but it’s better than the alternative.

Thankfully, that better card is nowhere to be found as he merely summons a 1/1 Recruit. That’s good enough for me. I plop down the 2/3 Beast that I kept around since the very beginning. It has to contest something that costs 3 mana the next turn, but I don’t have anything else to offer at this juncture. I also remove the Recruit to make sure he can’t buff it. That’s something Paladins are very good at – it’s generally a good idea to make sure that nothing sticks around on their side of the board. 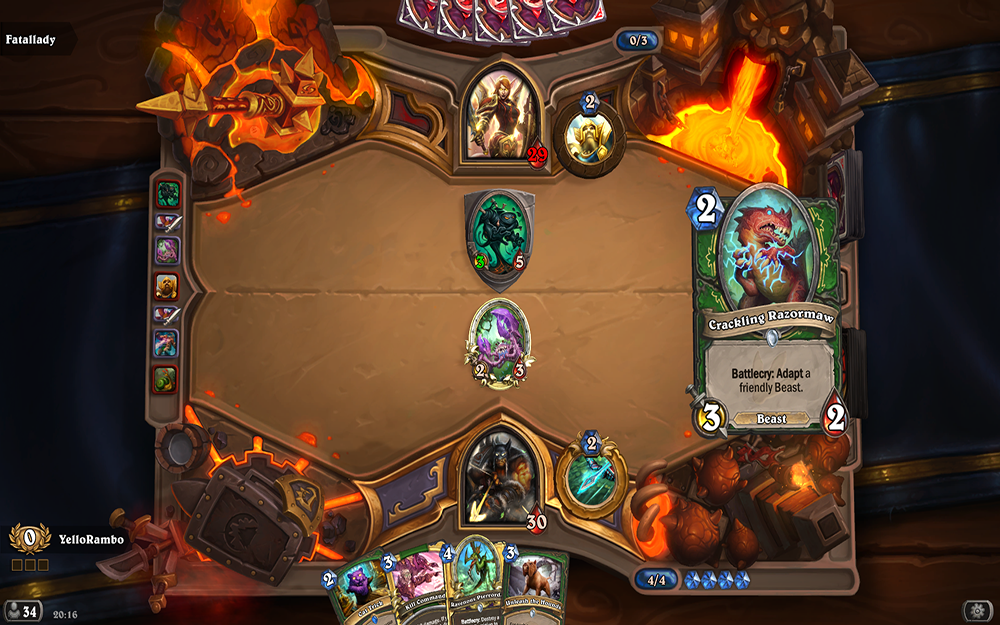 He plays a premium minion that would be quite challenging to deal with normally: a Tar Creeper. Not only is it sticky and ugly, but it also has Taunt, meaning I must remove it before I can continue my glorious quest of hitting my opponent in the face.

The Crackling Razormaw can help me out with that. Two out of the nine possible adaptations would immediately do the job – I’m looking for +3 Attack or Poisonous for the insta-kill.

Unfortunately, I don’t strike gold and have to stack up 3 extra hit points on the minion instead. This also makes it more inconvenient to play the 4-mana minion from the macaw later as it would require me to consume one of my own fighters on the field to get a benefit.

These cards are too good to serve as breakfast. I proceed to deploy the Cat Trick and hope that my opponent plays a spell to activate it the next turn. Preferably a bad one that doesn’t do enough for the price and lets me continue the aggression. 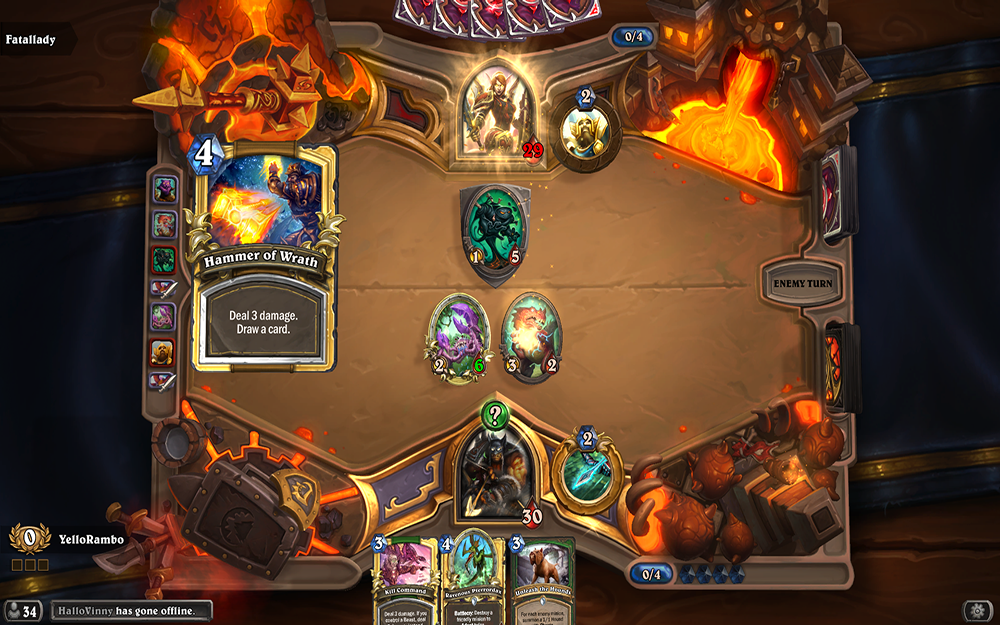 Perfect. The Razormaw may have been hammered into the ground, but its sacrifice will never be forgotten. I get a 4/2 cat as an immediate replacement and a chance to finally push through – so this is what I do.

While Kill Command is a very exciting proposition when it comes to hitting an opponent’s face – dealing 5 damage is a whopping one-sixth of their total health –, you are generally going to get better results by targeting repetitive hits with your minions instead. Besides, using that card will let me deal 6 immediately, while also allowing me to deploy the 2/3 I have just drawn.

A simpler way to put it: I want to hit him in the face as hard as it is possible. Kill Command enables that. Besides, I’m starting to run out of gas, so let’s not just set my remaining minions on fire. 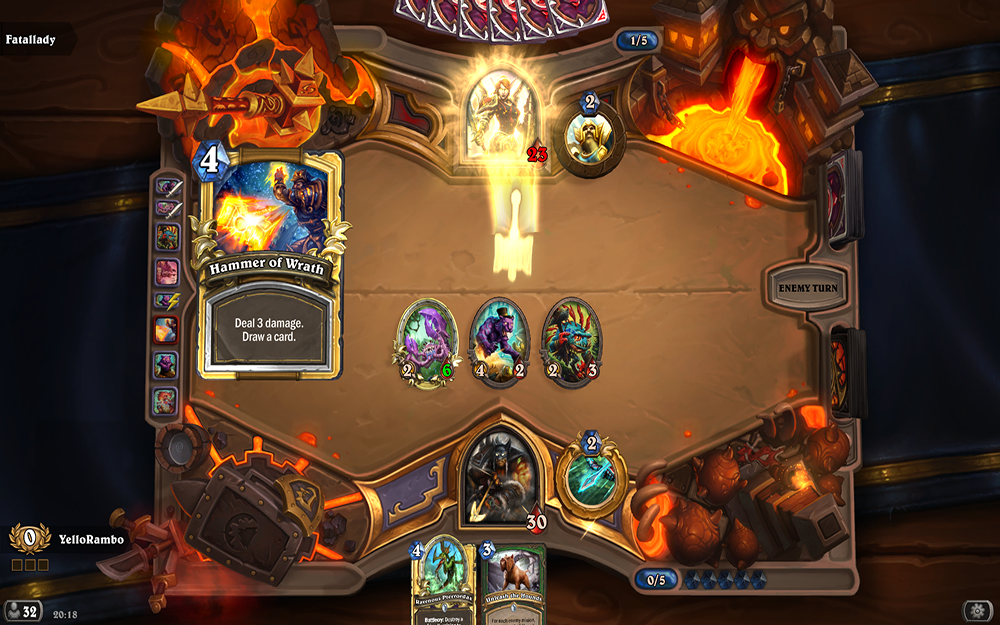 This guy needs some anger management courses. Paladins Anonymous, perhaps? Not that this is a particularly efficient move on the fifth turn: in fact, I’d be very pleased by it if I had anything proactive to do as my own follow-up.

Sure, yes, we have a buffed crab and Bobby’s best friend, but neither of them deal enough damage to please me. It’s also worth noting that they still don’t qualify as healthy and efficient breakfast for my leftmost card – we need to draw something good here. Our opponent has five more cards in hand than we do, after all. We need to end this before the cavalry arrives. 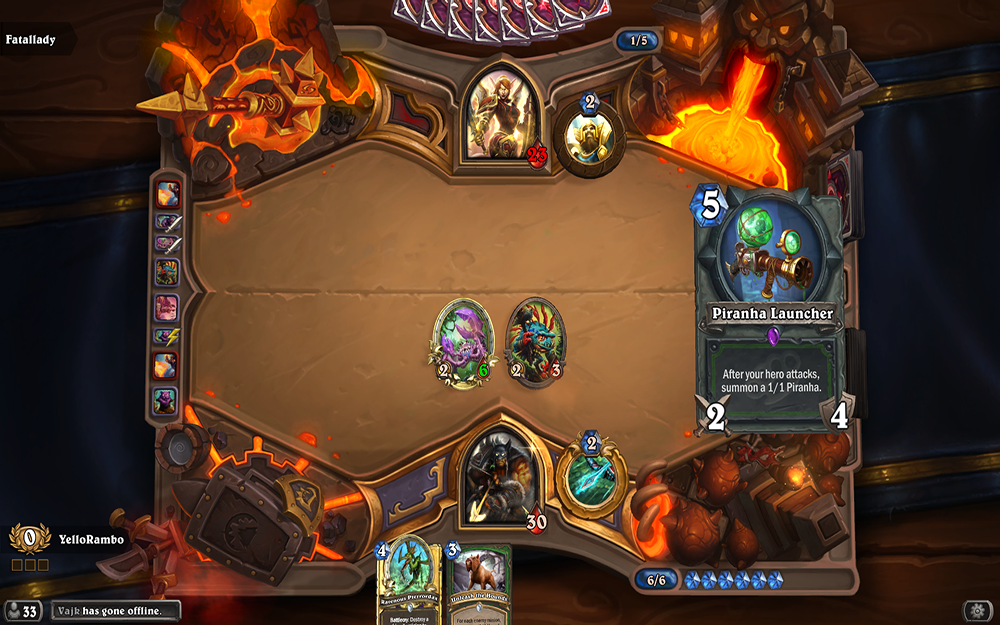 This is close to perfect! While I would have probably preferred a Terminator – as nearly everyone in a combat situation, I assume – this is almost as good. With 8 damage over the course of four turns and a quartet of deadly piranhas to provide assistance alongside it, I’m still not entirely sure how this odd weapon works. But it’s got a scope and everything: we’ll shoot first, ask questions later, then serve a piranha as breakfast. It really could not have gone much better. 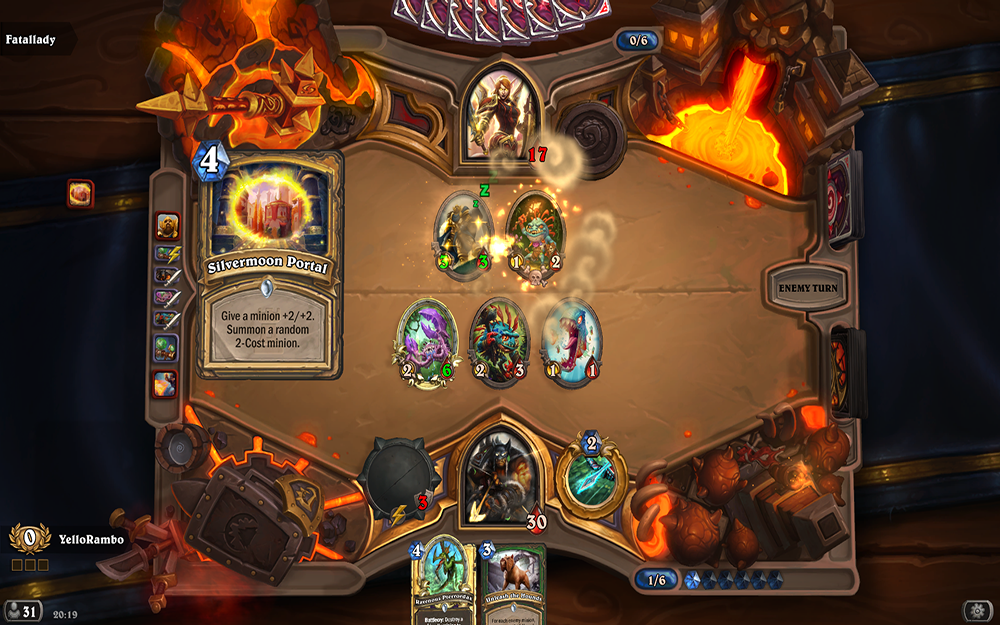 You know your opponent is doing poorly when I’m choosing to trade off his minions as a mere precaution. This is also an excellent opportunity to finally get this 4/4 on the board. Thing is, it’s not going to stay a 4/4 for long: eating the piranha will magically allow it to adapt twice and therefore gain two useful abilities: +1/+1 to its stats and double-attacking capabilities. If this sticks, we’re going to easily win the game. 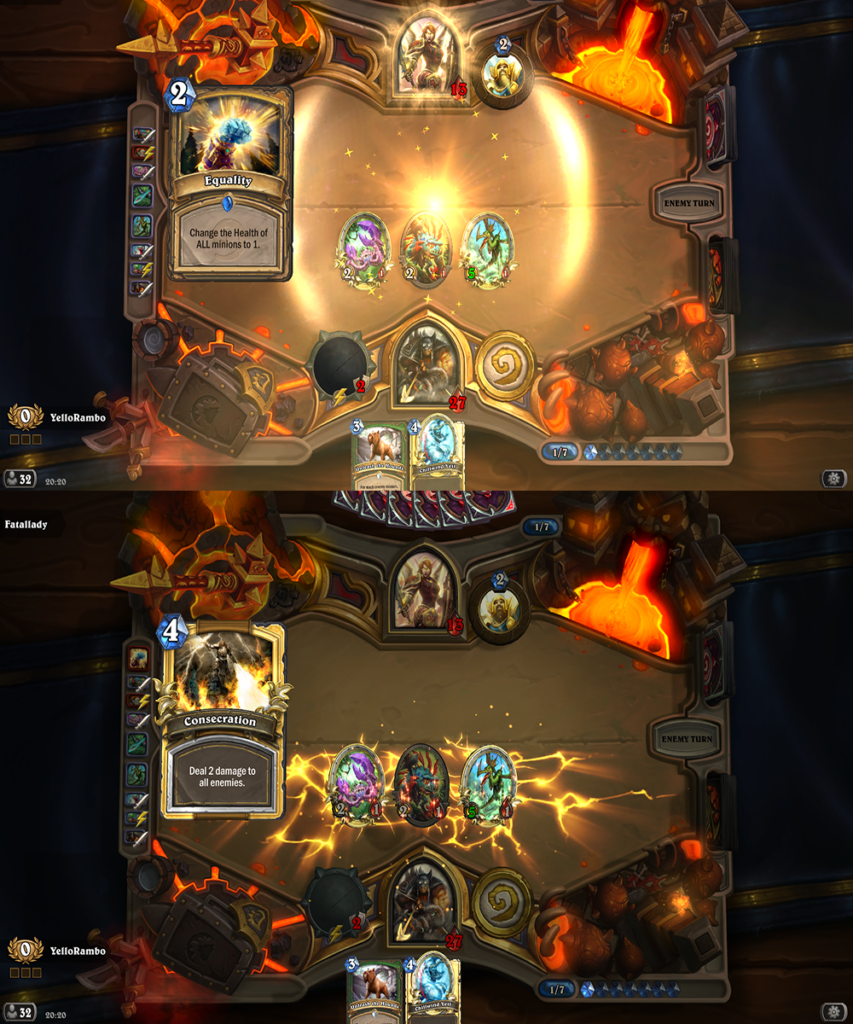 I watch with gritted teeth as Equality and Consecration, the age-old combo board clear of Paladins, completely destroys my board. This could be the point where the game turns around: I’m running out of resources and my pressure has been mostly nullified.

It’s time to go in for the kill and I play accordingly: even though I manage to draw one of my bigger cards in the shape of The Curator, I downsize and only play the Chillwind Yeti that’s been chilling in my hand for a few turns now. It allows me to use Steady Shot and deal two extra damage.

We’re going to try to press that button every single turn from now on: we don’t have much time left. I also launch a piranha at his face for good measure. His last attack cannot go unpunished. 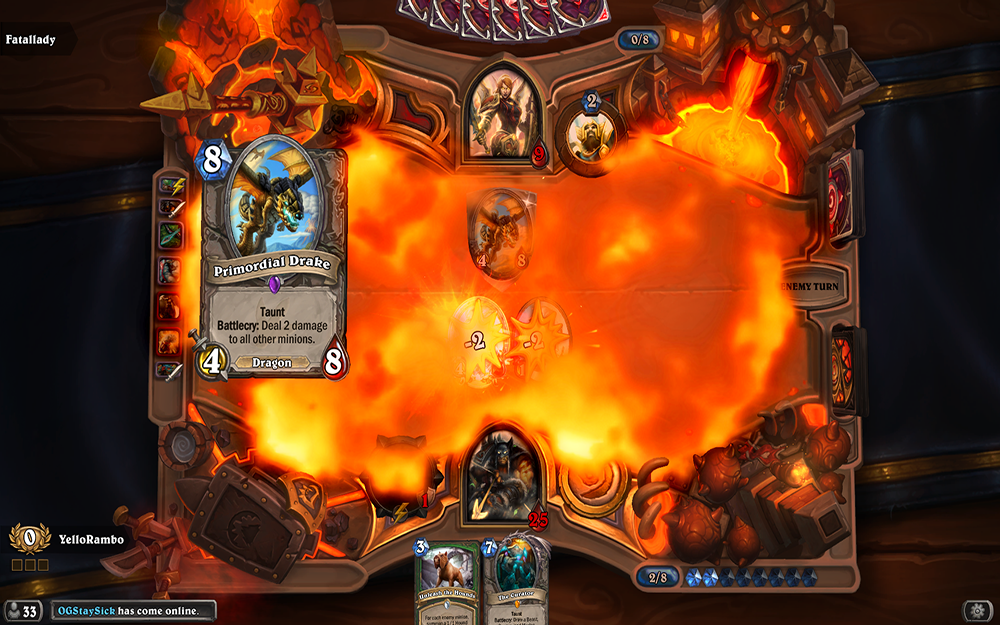 A fiery inferno descends on the arena as a massive Taunt minion drops on the field, eviscerating my brave carnivorous fish and damaging the yeti on the side. I can’t get through it at the moment, and the topdecked 3/3 Vicious Fledgling also doesn’t help the situation.

It’s going to be an uneasy standstill but it’s not like I’ve got a choice in the matter: I play The Curator – which promptly summons Bobby and a hyena – and proceed to click that wonderful button again. Steady Shot. Our best way to victory.

My opponent promptly follows this up with another gigantic Taunt that also buffs his existing minion. The cavalry has arrived and it’s threatening to clear up our little insurrection. Bobby seems scared. I can’t blame him. 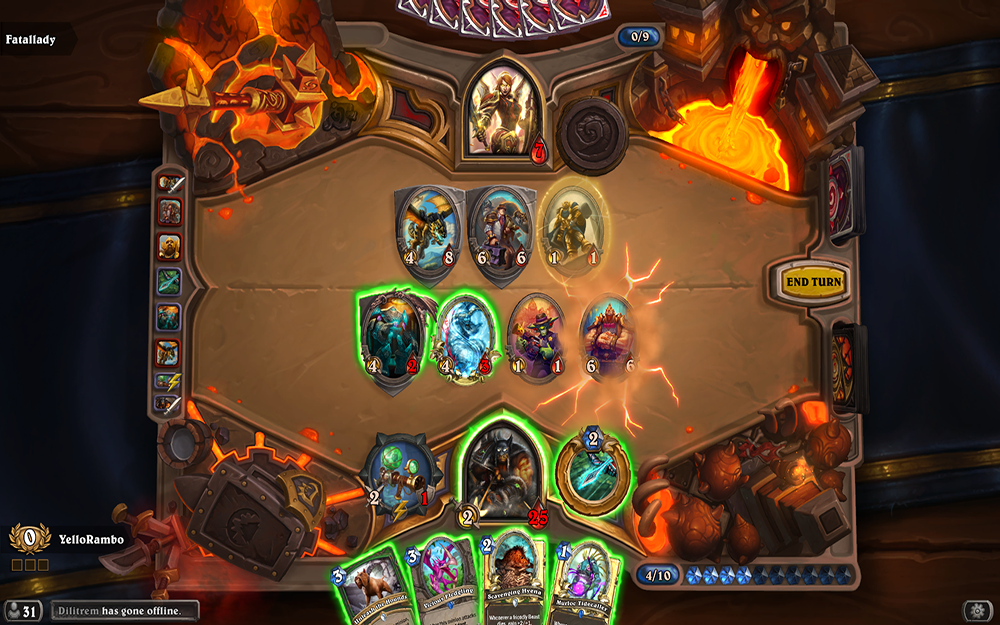 A big ogre offers its aid and I gladly take it. Our opponent is struggling to stay on his feet, we just need to find a way to get in seven more damage. Five. All hail the Steady Shot. I also send Bobby out to get some experience while the Yeti and I take care of the 6/6. If the Paladin plays too many cards, the swingback from Unleash the Hounds should be good enough to deliver us the win.

He proceeds to eat my ogre with a Moat Lurker and play an egg that does nothing. I’m left with two damage on board, facing a Taunt with four health. This is our last opportunity before we’re completely locked out.

Cry havoc and let slip the dogs of war! 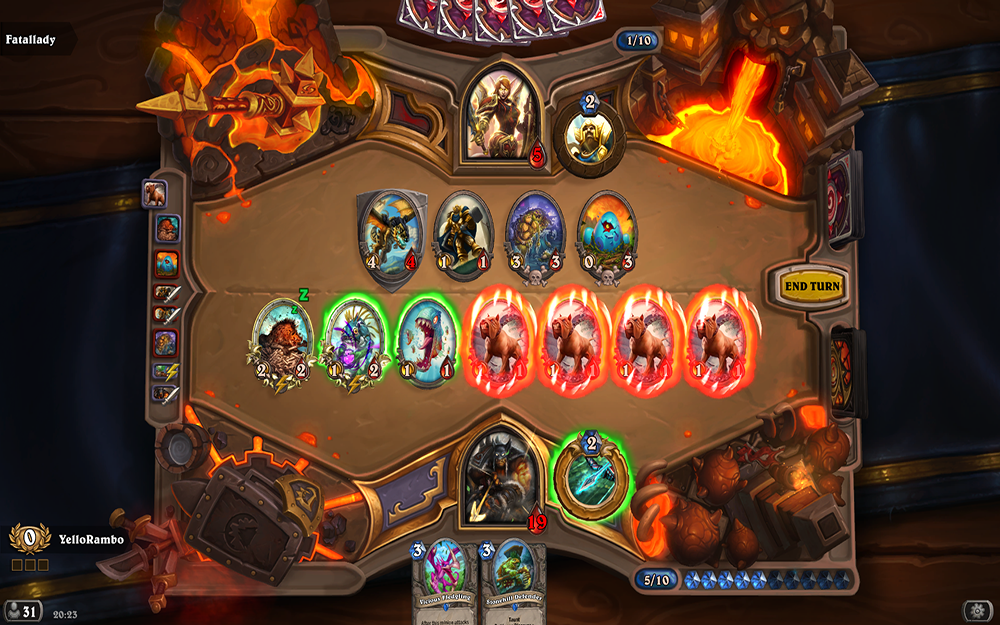 Our opponent has two health and an egg left, facing down a massive 10-attack hyena and some other assorted goodies. He flails around, throws out a few more cards, then concedes, seeing how he cannot possibly make it out of here alive without the head of the Arena sparing his life.

That’s none of my business at this point: we’ve triumphed in our first battle, gained some valuable experience, and also gave a chance to Bobby to showcase his talents. Okay, so the latter may not have happened this time, but I’m sure he’ll be extremely valuable at some point…