Part chess, part poker, part video game, Hearthstone has captivated more than 70 million players over the last few years and has been a runaway success, its shiny graphics and accessible style making it a great way to discover the genre of collectible card games.

Normally, you would construct a deck from the cards in your collection and use them to fight in a match – however, the Arena game mode turns everything around: you are forced to draft each one by one, selecting one of three options.

The question is this: how far can you go if your only goal is to hunt down your opponent? What is a deck with multiple Terminators and a bunch of piranhas capable of? And most importantly: will Bobby survive the fight?

I’m still confused about having to pay for the honour of entering a gladiatorial arena as a fighter instead of a spectator, but I don’t get the option to change my mind. My mission is to beat twelve opponents. It’s either that, or humiliation and death – three different times before I finally get booted out.

Thankfully I don’t have to go in there alone: I do get to draft a small army with me before I engage someone else in battle. 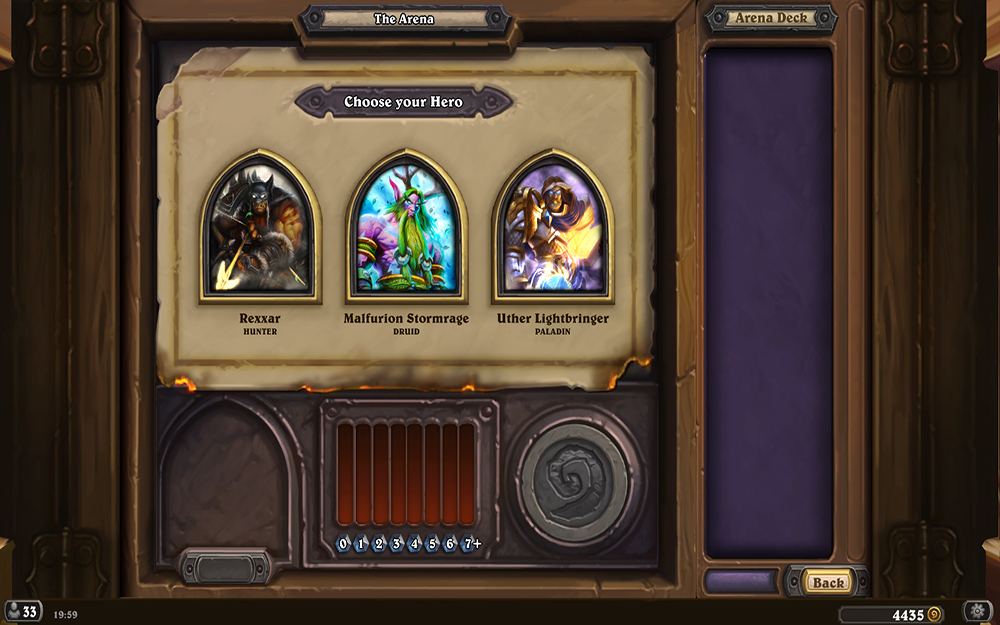 I’m still confused, dazzled by my surroundings and not particularly keen on fighting to the death when I am offered a choice between a bow, two antlers, and something called “justice”. I choose the first one, considering that might actually be useful against the other gladiators.

How quick one accepts his fate! There’s no time to waste though: now it’s time to draft that army of thirty mercenaries that will accompany me to the fight. They all have a price, different attacking capabilities, and not everyone is a glutton for punishment: the crystal, the sword and the drop of blood will let me know it all. If there’s anything else important about them, they are wearing helpful signs around their neck with some very descriptive text on each.

Most of them are minions that will do my bidding on the battlefield – some of them are arcane spells of old that will help me demolish my opponents. We’ll require both to triumph, and my job is to find the right mix of them. Draft too many expensive tools and we will hopelessly fall behind in the early turns. If I focus too much on the beginning of the battle, I may not have any reinforcements to call upon when the going gets tough.

As a Hunter, we are generally going to be on the front foot and we should plan accordingly. We’re looking for an early advantage that lets us inflict enough injury that we can finish off our opponent from afar even if we are wrestled off the board at a later stage. We might have to adjust our strategy depending on our hiring options, but that would not be a good sign. 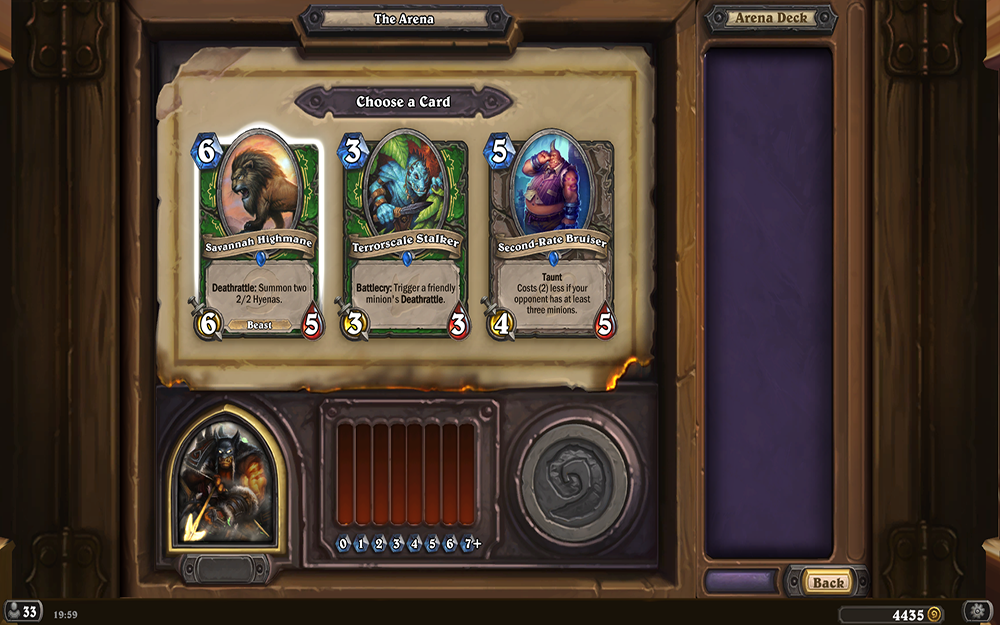 This is a pretty good start! While all these minions are fine in their own right, there is really only one choice here: the granddaddy of them all, the mighty Savannah Highmane, the dream of all HR officers.

This beastly beast is going to be our T-800, ready to terminate everything in its path. It’s got fantastic stats and it’s very hard to remove it efficiently: even if you kill Savannah Highmane, it leaves 4/4 worth of Hyenas behind. I could not have asked for a better card for our first pick. Better still, our next warrior in line is a cheap Beast with adaptive capabilities, which should work very well with Arnie over there. 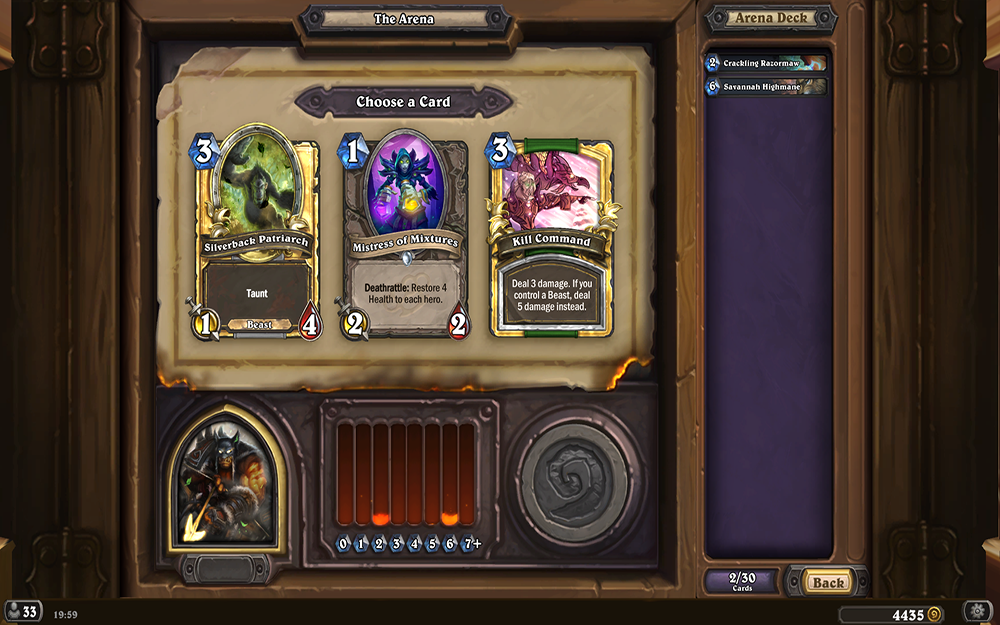 I’m a Hunter. I hunt. As such, I do not intend to heal my opponent’s face at any point during the game. A 1-attack minion on the third turn really doesn’t help me. Dealing 3-5 damage from hand? Now that’s a very different story. Kill Command is our third pick. Some nice minions follow: they generate additional cards so that I can keep going in the late-game, while some of them simply just hit hard. Both can be very valuable attributes. 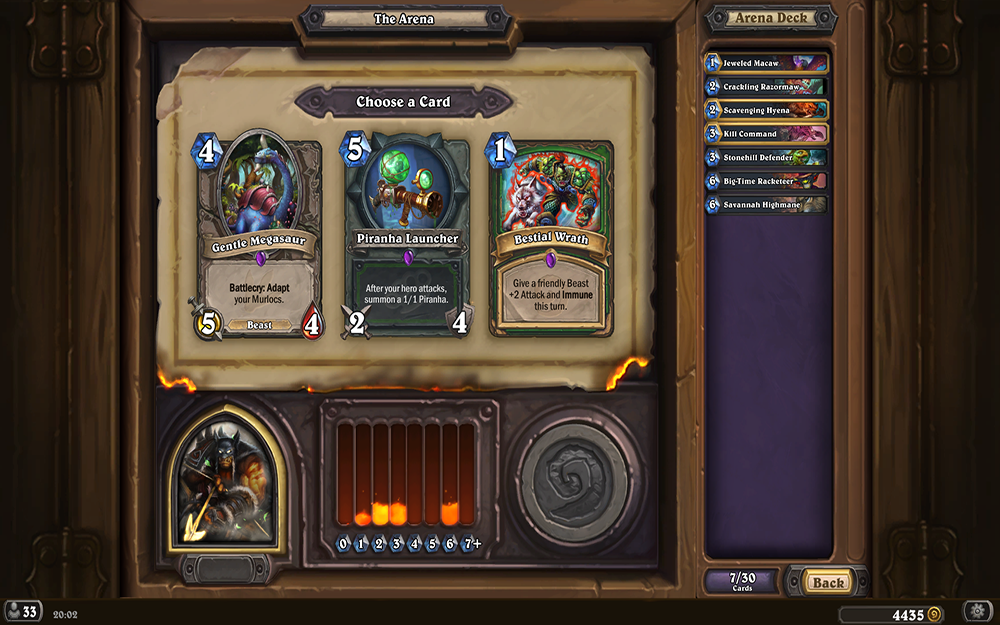 Yes! A weapon! Nothing’s better than directly hitting your opponent in the face over and over again! Also, you get piranhas. That you launch out of a gun. What else do you need, really? Perhaps something that hits even harder and costs less to play – but beggars can’t be choosers and no one is particularly rich in this game mode. This is almost as good as it gets. 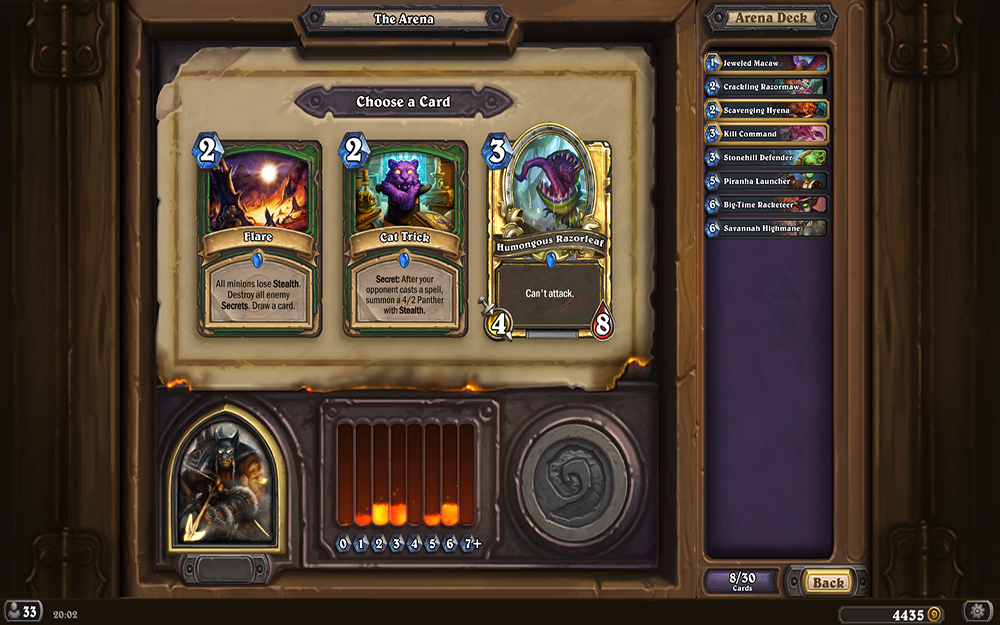 Flare’s text rarely comes into play in this game mode (or ever, in fact), so it’s Cat Trick. What, you want me to pick the card that literally says CAN’T ATTACK on it? It’s also a carnivorous plant, so I’d rather avoid picking something that could eat me if it’s in a bad mood. At least the worst a cat could do is scratch me. It’s also stuck in a hat. It’s going to be okay. I’ve got a laser pointer on standby, just in case. That always saves me from my neighbour’s real-life overly attached feline, so it should be good enough for its virtual counterpart as well. 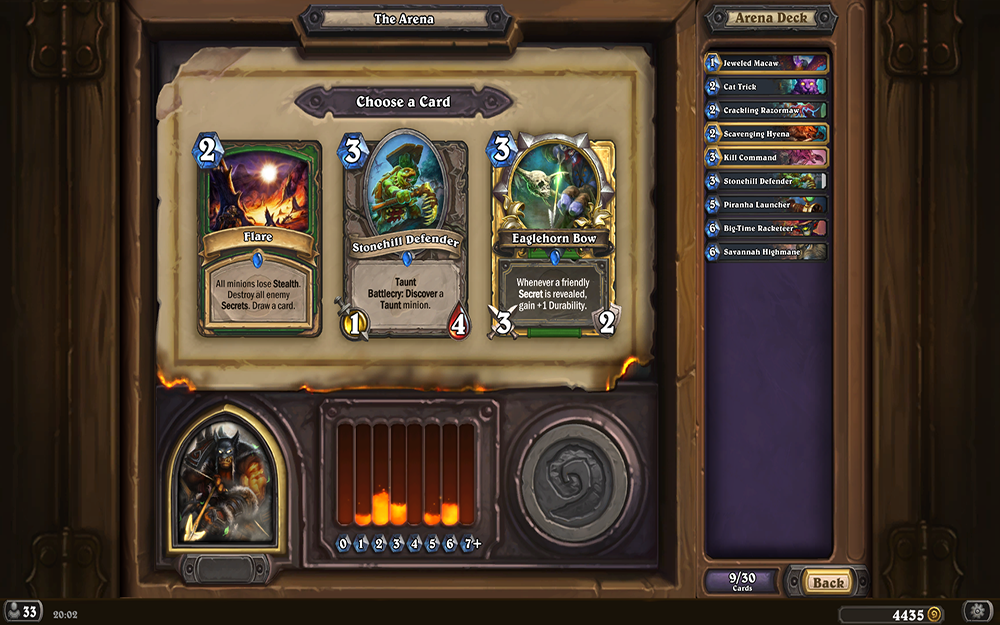 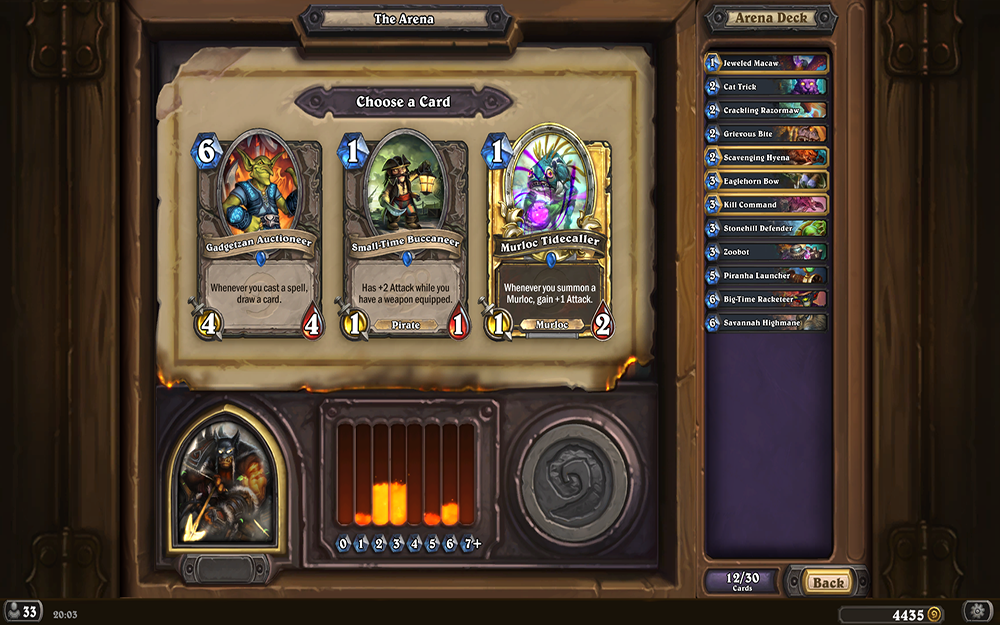 I may have gotten a bit overexcited about that bow, sorry. Let’s focus on this little shop of horrors in front of us. After getting some extra damage options, we face a seriously rough choice: it seems like I now have to select something from the bargain bin of potential fighting companions.

The auctioneer is essentially a 4/4 for 6 in this deck, so that’s out of the running immediately. It may have the best deals anywhere, but I’m not buying. Still, do I then pick a 1/1 that sometimes becomes a 3/1? Thing is, it dies if the opponent even sneezes on it. At least the 1/2 Murloc can kill these incredibly small minions. It’s not particularly strong, but it’s nice. It’s a little pet. I’m going to call him Bobby.

So Bobby it is. I’m sure he’ll do great. He’s like Rocky – at the very beginning of the first movie, that is. We’re going to let that minor detail slide. I’ve already bought him a pair of boxing gloves. He isn’t really sure what those are good for. I’m sure he’ll figure it out. He’s brighter than he looks. I hope. Let’s be honest, that isn’t a high bar to clear. 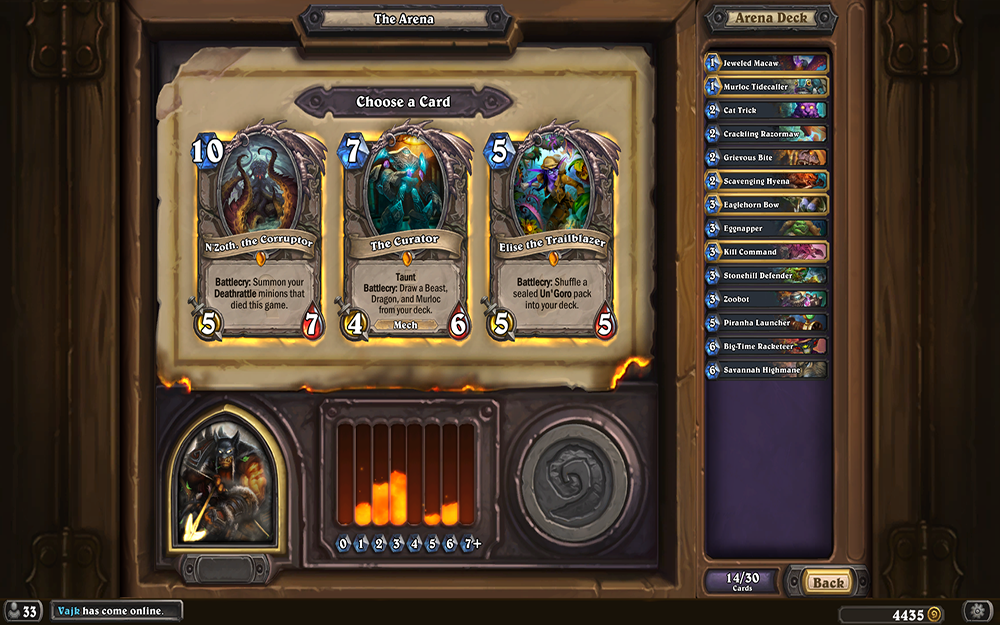 Woah, legendary. The rarest and most amazing cards in the game! It’s a shame two of them are grossly under-statted in this case. Elise the Trailblazer seems to be the obvious pick at first – it shuffles a card into your deck that draws five other ones – but I think I prefer The Curator here.

I already have many beasts and Bobby (don’t forget Bobby), meaning it could be a source of much-needed extra fuel later in the game. It’s extremely important that we don’t run dry as the aggressor, and cards like Stonehill Defender and The Curator will greatly help us in achieving this objective. It can also hit the opponent’s face for 4, which counts for something.

Not that it particularly matters, because my next option is to pick up a second Savannah Highmane. Let’s just say that if Skynet managed to send two T-800s back in time instead of just one, the first Terminator movie would probably have had a very different (and more gruesome) ending. Thankfully we don’t have to worry about such limitations. I start looping the theme song just to make sure that I get in the right mood for this.

Let me grab that telephone book… 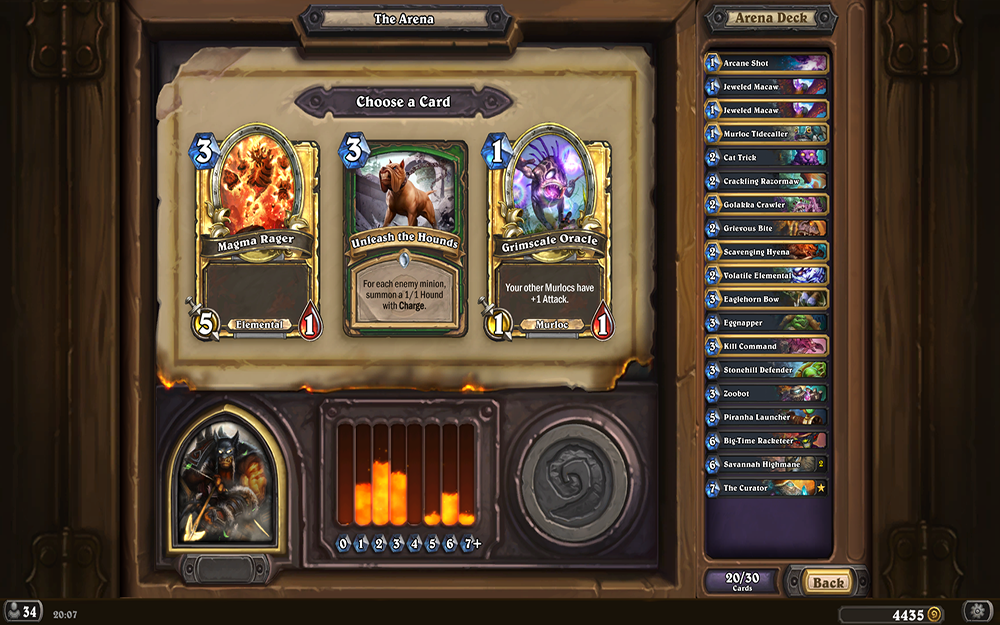 No, Bobby, don’t look at me with those sad eyes of yours. No, I’m not going to draft another 1/1 to keep you company and make you feel a little stronger. I’m also not taking a 5/1, one of the famously bad cards of the game. Unleash The Hounds is a nifty little board clear that works well with all our Beast-related cards. Bobby may be sad, but I am very happy. 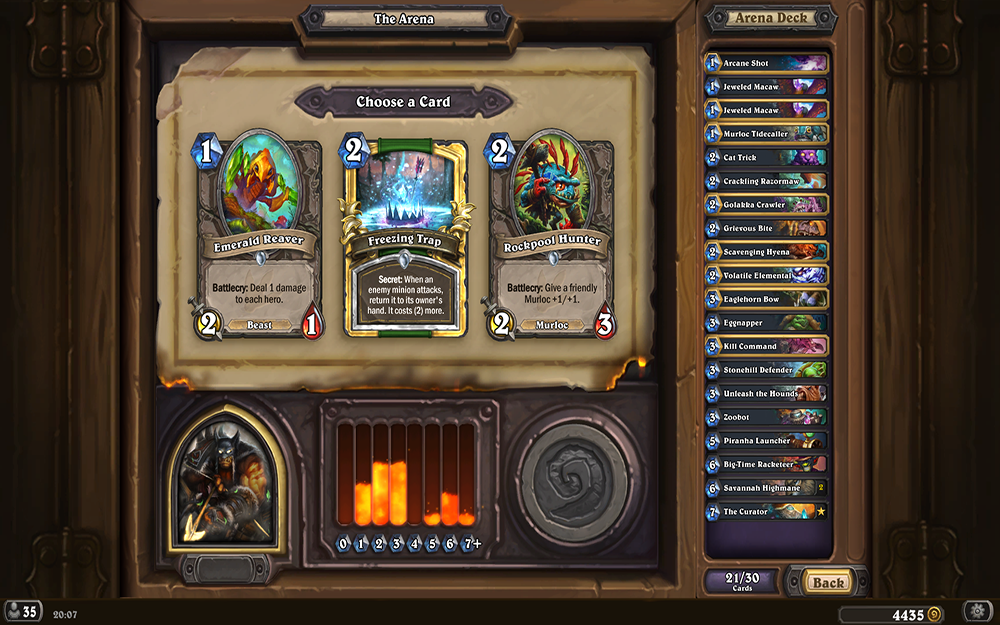 Sigh. You know what, Bobby? You’ll get what you ask for. Freezing Trap is a fine choice as well, but that poor little thing is already heartbroken and I don’t want it to feel lonely anymore. (This can also work with The Curator, but don’t tell Bobby that I even considered that. As far as he knows, this was all for him and the boxing gloves are there to make it easier to hug the creatures on the other side of the board.) 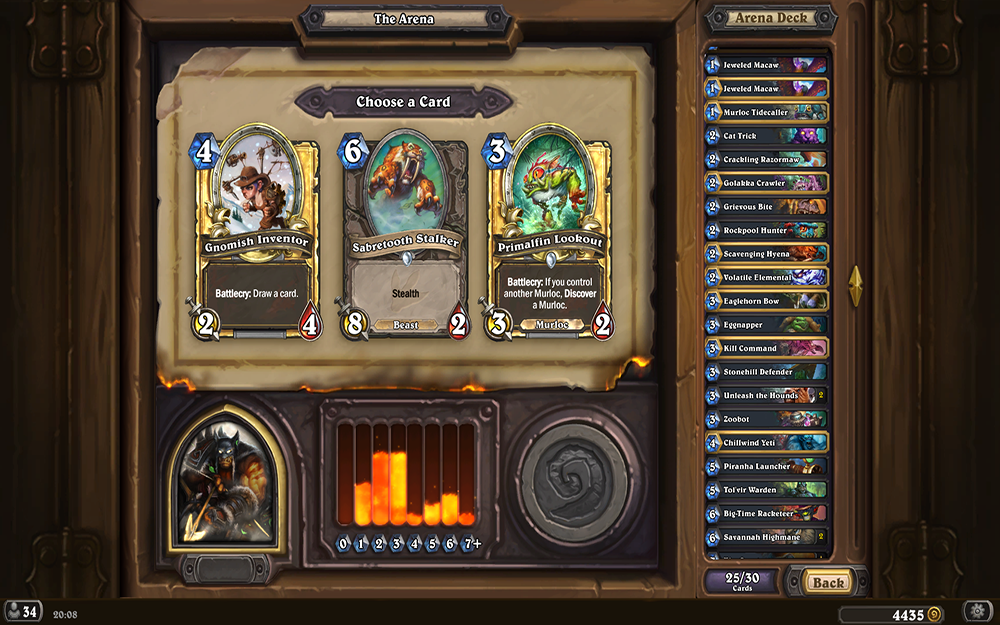 No, Bobby, go away. I’m not picking that Murloc. Can’t you see that I’m trying to fill up the gaping hole that is our 4-mana slot with the Gnomish Inventor? 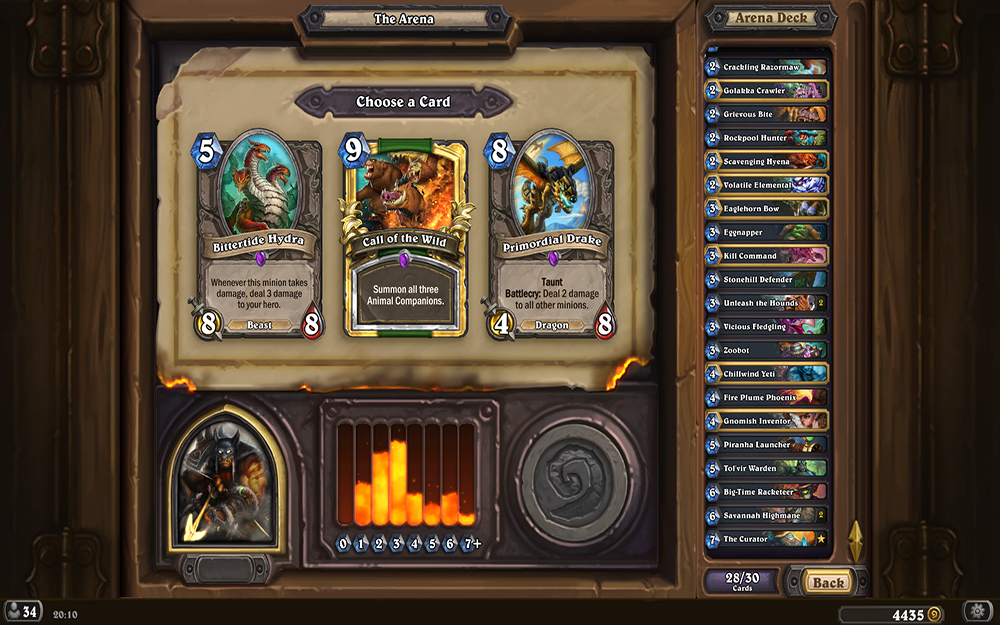 What amazing cards. If only I could have all three of them…but unfortunately that’s not an option, so let’s narrow it down to one. Bittertide Hydra is a large beast at a relatively low cost, which is normally very good for this mid-rangey Hunter deck, but we’re doing good enough with those mid-game threats already, so I think I’ll pass on that.

Primordial Drake is a very strong defensive minion that would also potentially give me a third draw off The Curator, but it nukes my own board as well and doesn’t really fit with our aggressive approach.

I grab my phone and ask for Mr. Wild, hoping he will get back to me soon.

And that’s your lot. All in all, it seems like a pretty good deck for what a Hunter player is trying to accomplish: get ahead early and never let that lead go until your opponent ceases to exist.

While I find it very difficult to predict how far a particular run will go nowadays, I think a 7-3 scoreline is probably the least we could expect. Of course, it could just as easily reach the promised land of 12… or more likely the garbage heap of every 0-3 deck ever made.

We’ll see soon enough. Bobby and I are eager to enter the arena…