Italian football is in a dark place right now.

Failure to qualify for the 2018 World Cup resulted in national outcry and an impassioned inquest into their failings under Gian Piero Ventura. The costly two-legged defeat to Sweden even left poor Gigi Buffon in tears – a sight that tugged at the heartstrings.

Italy’s inability to get their act together in World Cup qualifying was down to numerous factors (the bizarre decision not to play Lorenzo Insigne chief among them) but to say there is a talent drain in Italian football is wrong. On the contrary, in fact, Italy has some outstanding players making their way through the youth ranks.

It will take time for the wounds of the Sweden defeat to heal, but Italian fans can take solace in the fact that there are plenty of young players waiting in the wings to replace Buffon and Co. The future is bright…we promise.

To that end, here are five of the very best Italian wonderkids on FM18. 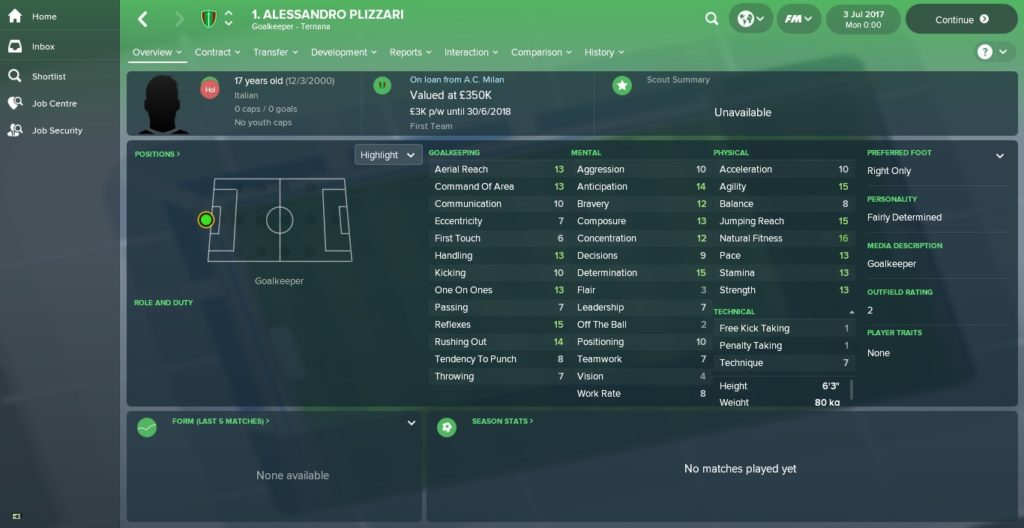 Not only do AC Milan have a once in a generation goalkeeper in the first team, they also have another absurdly talented shot-stopper rising up through the youth ranks.

Unless he ends up joining Real Madrid for £100m or something, Gianluigi Donnarumma is likely to be Milan’s No.1 for the next decade. But if he does move in the near future, Alessandro Plizzari might just take his place.

At the start of FM18, Plizzari can be found at Serie B side Ternana, who took him on a season-long loan from the Rossoneri. Despite being only 17, Plizarri was handed the No.1 shirt on arrival.

Ternana might be struggling near the foot of the Serie B table at the moment, but Plizarri is getting valuable first-team experience and, whether at Milan or elsewhere, he is a good bet to become a top-flight keeper at some point.

On FM18, Donnarumma’s presence at Milan is probably a good thing, as it should make it far easier to prise Plizzari away from the San Siro. 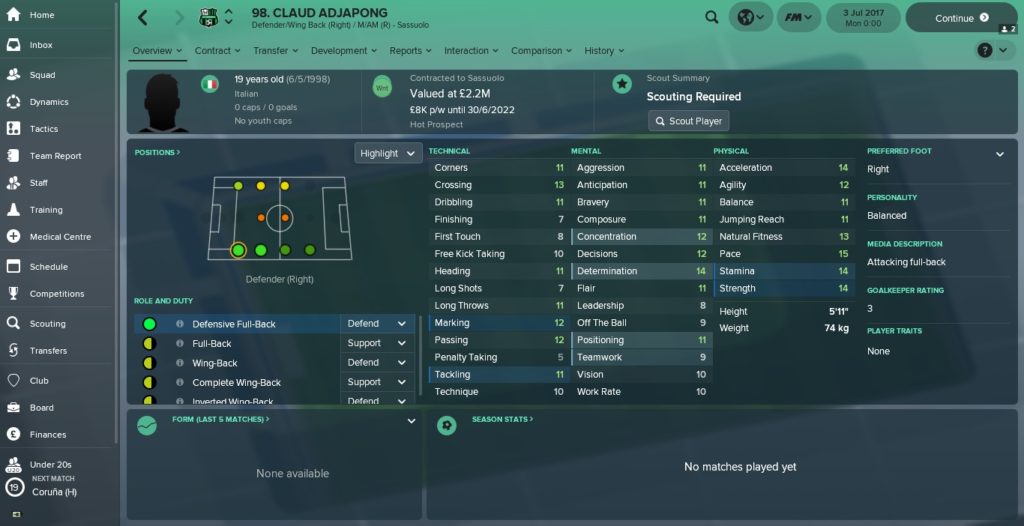 Sassuolo are rapidly gaining a reputation for being one of Italian football’s best promoters of young talent, with players such as Domenico Berardi and Lorenzo Pellegrini (now of Roma) blossoming at the club.

Another player making a name for himself is attacking full-back Claud Adjapong, who has built on a breakthrough campaign last term with half a dozen Serie A appearances this term.

Adjapong, who is of Ghanaian descent and eligible to play for the Black Stars, has featured for Italy at youth level for the U19s and U21s over the past 18 months.

A dependable full-back on FM18, Adjapong is comfortable playing as an orthodox right-back, slightly further forward in a wing-back role, or even as a right-sided midfielder.

At the start of the game, his stamina stands out as his main strength, but the biggest weapon in his armoury long-term is his crossing. Marry the two together and you’ve got an excellent over-lapping full-back on your hands. 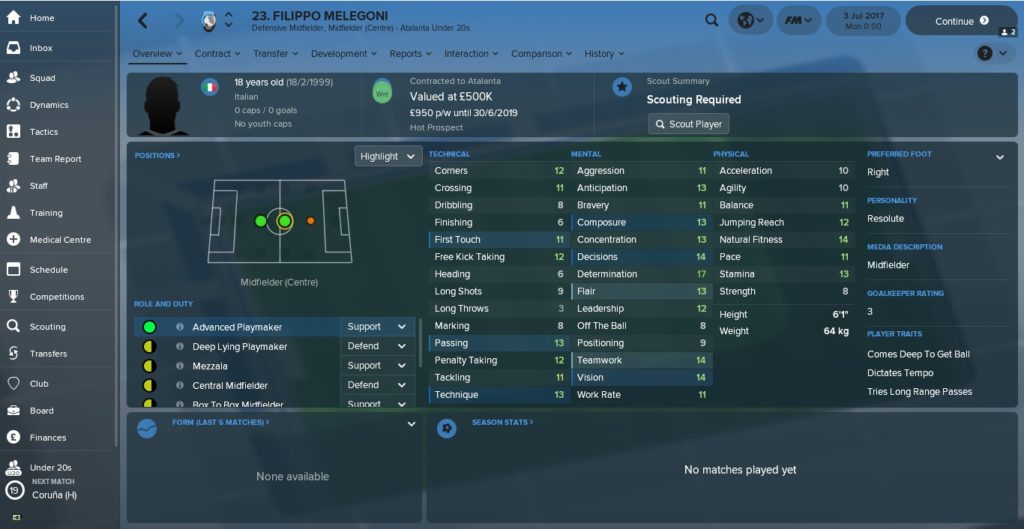 You might recall Filippo Melegoni from Football Manager 2017, where he usually ended up as a kind of re-booted Daniele De Rossi patrolling the midfield.

If you were worried that his abilities might have been overplayed on FM17, then fear not. He’s just as good in this year’s game.

Following their record-breaking season last term, Atalanta managed to retain Melegoni’s services beyond the summer – but he should still be pretty easy to sign for a reasonable fee on FM18.

While not quite first-team ready, it shouldn’t take him long to get up to speed. Melegoni is clearly an intelligent midfielder possessing good stats for vision, decision-making and composure.

When it comes to technical qualities he could do with a bit of work, but if you incorporate him into first-team training and surround him with talented midfield players, he will soon become very useful indeed. 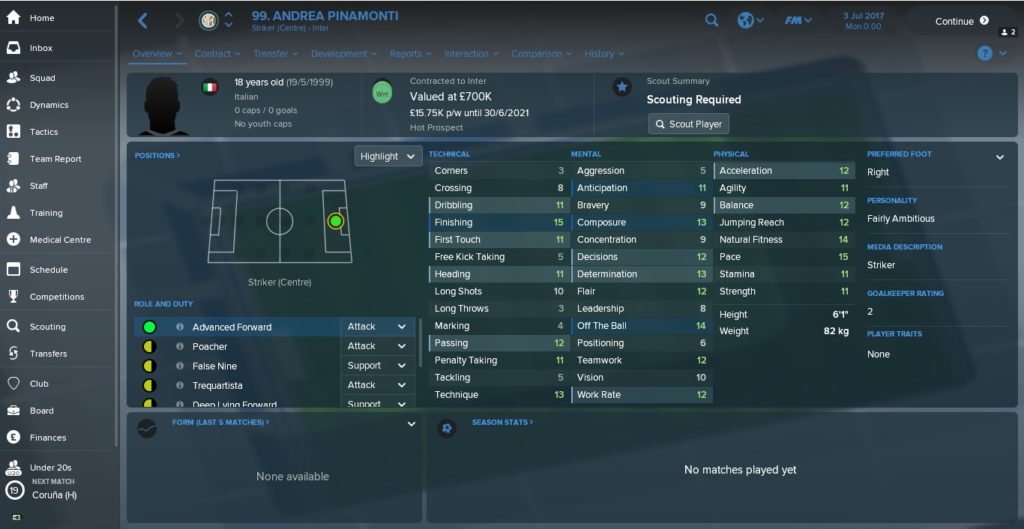 Italy are relatively strong in the striking department at the moment, with Ciro Immobile and Andrea Belotti both in form and Mario Balotelli enjoying a renaissance of sorts over in France.

However, Italian fans love a goalscorer and in Inter’s Andrea Pinamonti they could have someone with the potential to challenge for the Azzurri No.9 shirt in the not-too-distant future.

As you can probably gather from his already pretty hefty wage packet, Pinamonti is well-regarded at Inter and most likely being lined up as a future partner of Mauro Icardi in attack.

Pinamonti’s obvious strength is his finishing ability (pretty handy for a centre-forward) but he also possesses good movement and is pretty sharp across the ground too. Dare we say he’s similar in style to a certain Pippo Inzaghi?

Furthermore, at 6’1″ and weighing a bulky 82kg, he can certainly hold his own up front. It will be tricky to prise him out of Inter’s hands, but he will be available on loan at the start. Try and sneak an optional loan fee in there. 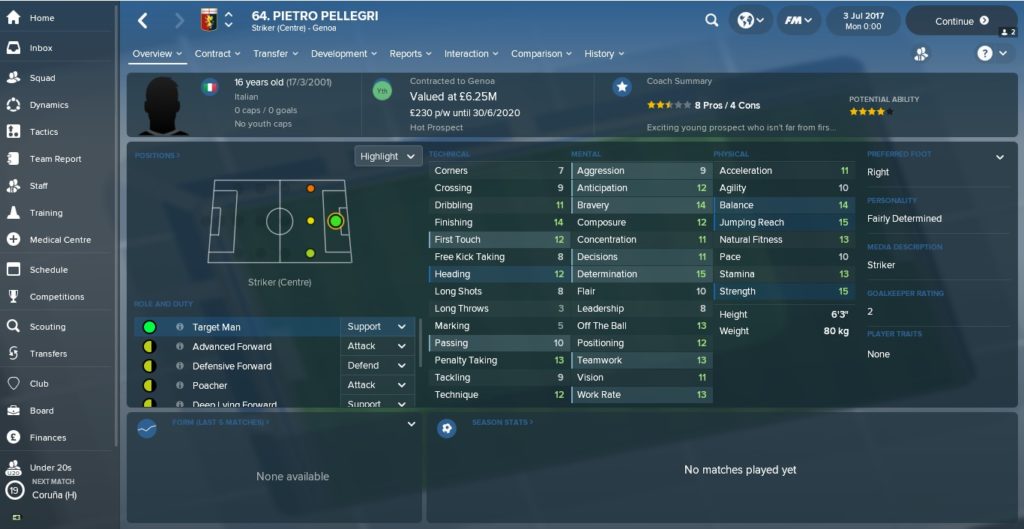 If you haven’t heard of Pietro Pellegri yet, chances are you will soon enough. After all, this is a 16-year-old kid currently tearing it up in Serie A and breaking records along the way.

When Pellegri scored twice against Lazio in September, he became the youngest player in Serie A history to score a double in a league match and the third-youngest top-flight goalscorer ever.

Already making history and being compared to Lionel Messi thanks to his precocious talent, Pellegri looks destined for the very top.

He already carries a £6.25m price tag at the start of FM18 but, due to his age, you can offer him a contract right away. Given his love for Genoa, though, it might take some convincing to get him to your club.