Ah, the Bundesliga. A treasure trove of burgeoning young talent.

With brilliant youth facilities and excellent coaches, German clubs have all the tools in place to produce homegrown players for their senior teams. On FM18, there are hundreds of top talents in the Bundesliga and we’ve selected five of the very best for you to keep an eye on. 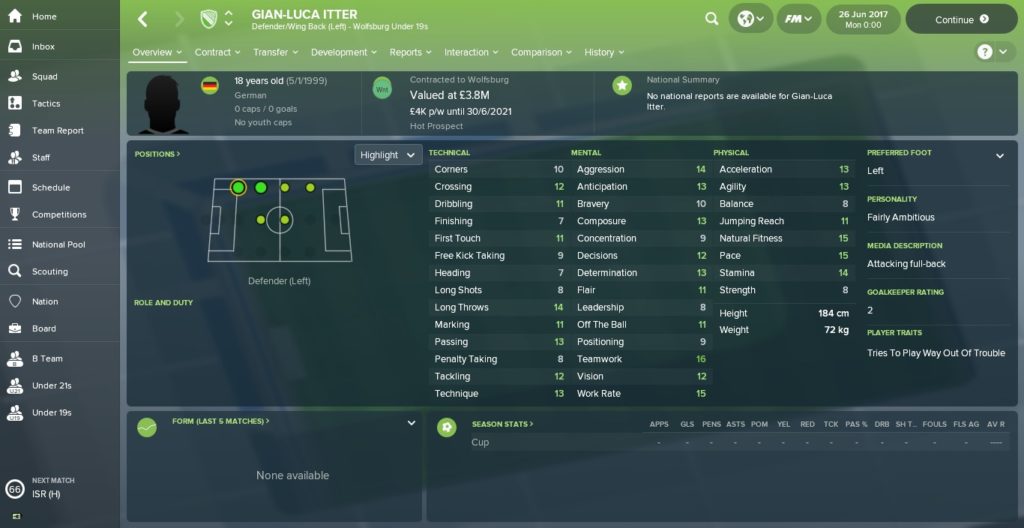 Possibly named after the great bald assassin Gianluca Vialli, Wolfsburg’s 18-year-old left-back Gian-Luca Itter looks destined for big things if FM18 is anything to go by.

The Wolves might have lost a talented rampaging left-back in the summer when Ricardo Rodriguez swanned off to AC Milan, but fortunately Itter is primed to take his place.

For someone with no senior appearances, the youngster boasts some seriously impressive statistics. Physically, he already looks ready for the step up, possessing 15 for natural fitness and pace, as well as 14 for stamina. With some pretty promising technique stats too, he could develop into the perfect modern full-back. 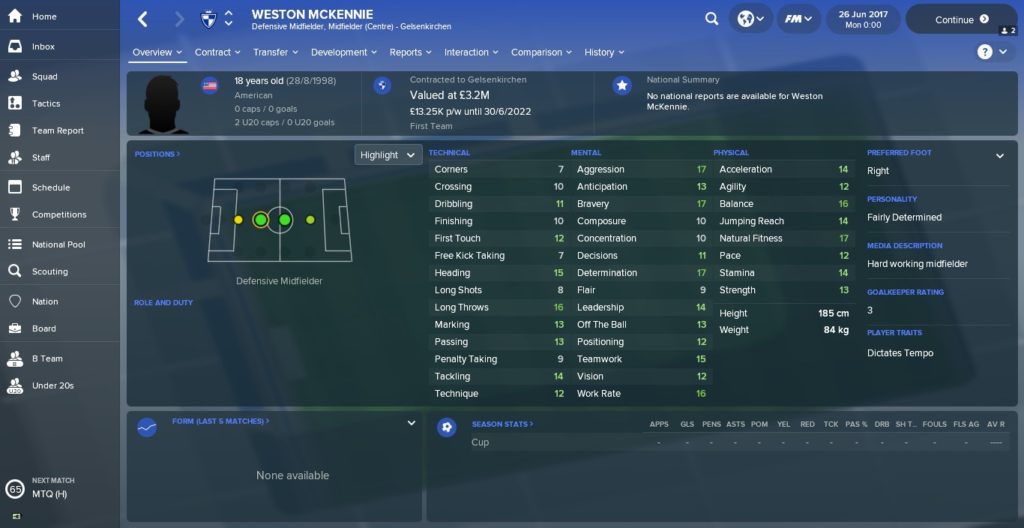 Schalke’s academy churns out top-class players on an annual basis – Julian Draxler, Manuel Neuer and Mesut Ozil are all alumni – but Weston McKennie was actually brought in from elsewhere, signing from FC Dallas in August 2016.

It hasn’t taken him long to make an impact. McKennie made his senior debut on the final day of the 2016-17 Bundesliga season against Ingolstadt and has gone on to feature nine times in all competitions this term.

He’s cutting the mustard at international level too, continuing his meteoric rise with a goal on his senior debut for USA against Portugal this month.

For one so young, he has an outstanding set of stats, particularly mental and physical, while he is also an expert in three of the four new player roles introduced this year – segundo volante, carrilero and mezzala.

And not only that, he has a long throw weapon hidden up his sleeve. Rory Delap would be proud. 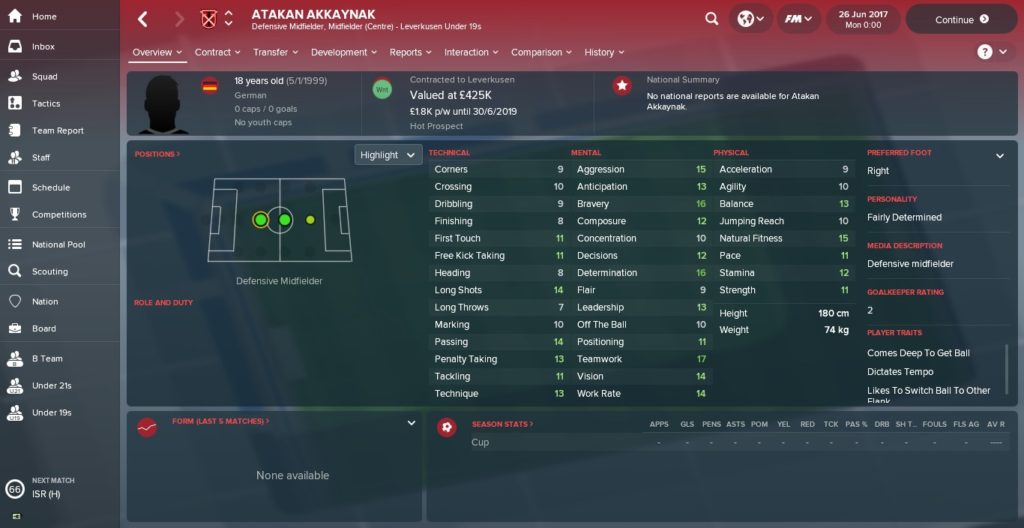 A classy holding midfield player with a penchant for long shots, Attakan Akkaynak may be a commentator’s nightmare but he is an FM18 manager’s dream.

The main attraction in Attaynak lies in his player traits; he likes to receive the ball from the defence, dictate the tempo from midfield, and switch play from one side to another.

Essentially, he is the archetypal Pep Guardiola player and it shouldn’t come as much of a surprise that Manchester City are often found sniffing around him at the start of an FM18 save.

Although his stats don’t exactly jump out at first glance, there is plenty to work with here and a loan spell to a possession-orientated lower league club and/or regular domestic cup outings should see them shoot right up. 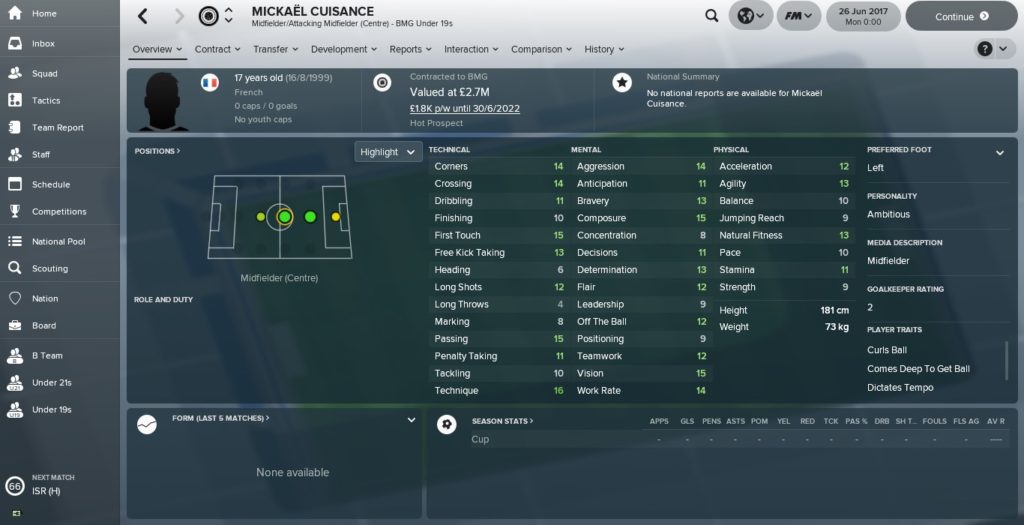 Borussia Monchengladbach had the foresight to snap up this French magician in the summer, plucking him from AS Nancy for peanuts. He could well be the next player they make big bucks from in the future.

Due to the fact he has only recently moved clubs, you won’t be able to bring Cuisance to your club for at least a year, but he’s definitely a player your scouts should be monitoring.

He’s slowly being integrated into the Gladbach first XI this season, making two starts in the Bundesliga and a handful of substitute appearances, but if he continues developing as he has so far he’ll be a regular before long.

On FM18, he’s perfectly capable of playing as an advanced playmaker in central midfield or slightly further forward off a central striker, depending on how you want to set your team up tactically.

Cuisance could do with toughening up a bit but technically he has all the tools to become a world-class attacking midfielder. 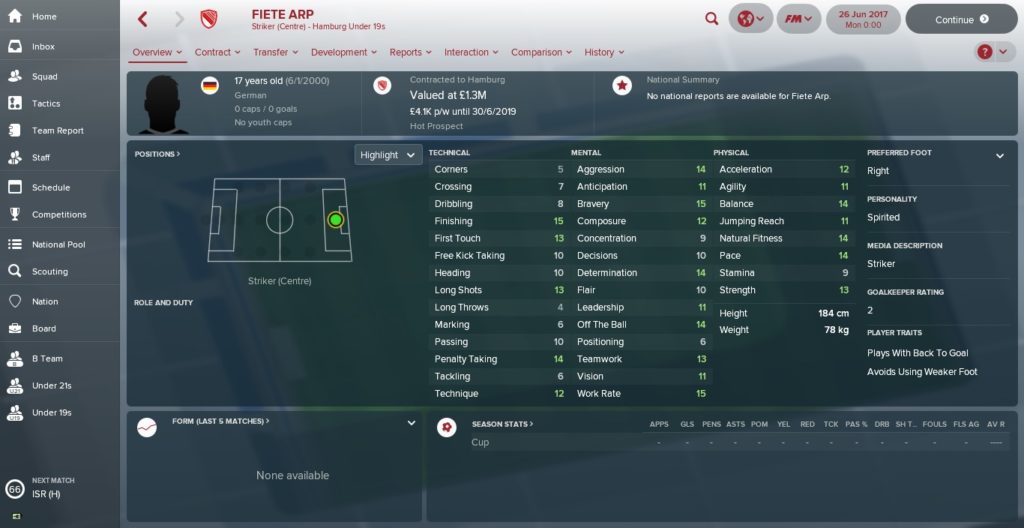 It has been a rough few years for Hamburg, coming perilously close to losing their proud record of being the only team to compete in every single Bundesliga season.

They are in the lower reaches of the table once again but, on the plus side, they do seem to have some good young players coming through, with 17-year-old Jann-Fiete Arp the pick of the bunch.

Arp has all the hallmarks of an instinctive, top-level goalscorer and he showed as much at the UEFA European Under-17 Championship in May, when he rifled in seven goals (including two hat-tricks) in four games.

That form saw him catapulted into the Hamburg first-team squad for this season and, after becoming the first player born after 2000 to play in the Bundesliga, he now has two goals to show from his opening three matches.

Compared in style to Harry Kane in his homeland, Arp is on track to become Die Mannschaft’s leading striker for years to come and Hamburg will struggle to hold on to him – which could be to your benefit on FM18.