And so to Scotland, where a win or a draw will definitely secure our place in the World Cup. I’ve now spent some time watching as Manchester City and Manchester United tussle for the title, Burnley make an unexpected push for Europe and Spurs hover just above the drop zone with one win in six. But I want to play now. And I want to win. Sadly, it doesn’t look like everyone is with me.

Steve Holland, the assistant manager I inherited from dear departed Gareth Southgate, has some feedback. He wants Phil Jones back. And for some reason, he seems really keen for me to pick Daniel Sturridge and Danny Welbeck, an injury-prone pair with a whole one goal between them this season. He’s really down on the whole squad, to be honest: he doesn’t rate any of those exciting, daring picks like Jamaal Lascelles and Harry Winks and Ben Chilwell and Trent Alexander-Arnold. I’m not sure I can work with a man like that. I may have to find a new assistant manager.

However, when Jamie Vardy gets himself injured, I have to find a replacement striker and Welbeck gets the nod basically because it’s either him or Troy Deeney. I don’t tell him that, obviously. The only other change is Nathaniel Chalobah. I wasn’t impressed with him last time out and he’s not doing much for Watford. Jones, I guess, can come along and train with the lads if he promises not to talk or make those faces. The press, predictably, still have their doubts. 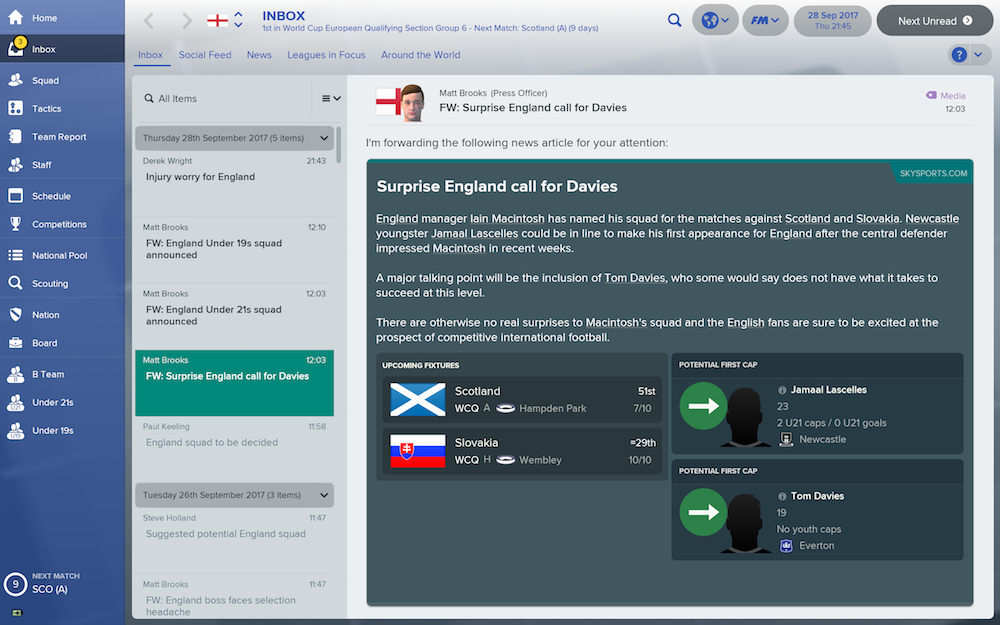 But I have full faith in my abilities, not least because I actually have a bit of time to prepare and some footage with which to work. So I break out the notepad and pen and I watch Scotland’s 1-1 draw with Slovakia. Alex McLeish, I conclude, has used up all his luck for the season in scraping a 1-1 draw here. He plays a 4-1-4-1 with my old friend from Celtic, Leigh Griffiths, as a lone striker. But Griffiths is so isolated from his teammates that it’s a wonder he doesn’t cry out with loneliness as the match unfolds. Darren Fletcher, ensconced between two tight banks of four, is crucial to everything they do.

I’m quite convinced I can push my England team up to the halfway line without fear of leaving ourselves vulnerable. McLeish’s insistence on crowbarring players into this formation whether they suit it or not (Kieran Tierney plays at centre-back against Malta and right-back against Slovakia) also bodes well. But I’m most delighted to see that they defend corners with all of their tallest players towards the near post. If we can spoon everything up to the back stick, we’ll have a free run at Tierney (5ft 10in) and his wingman Matt Ritchie (5ft 8in). Far post corners, that’s the key.

That’s what I tell the players anyway, and for the most part they seem fine with it. Apart from Eric Dier, who decides to switch off during my inspirational pre-match speech. He’s not the only one who switches off. 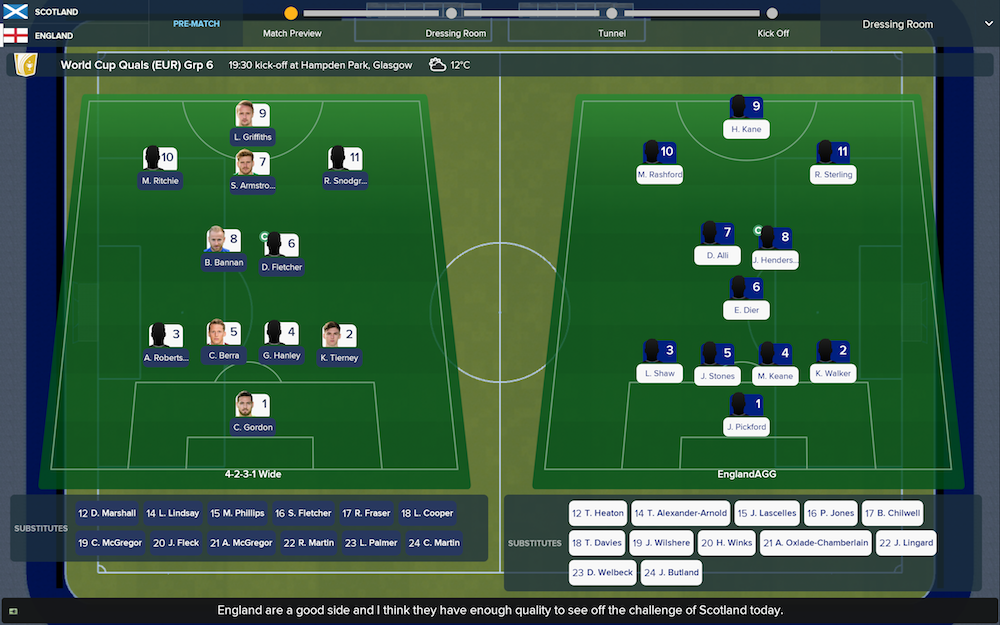 We win a corner in the second minute. Jordan Henderson steps up, deliberates and then scuffs the ball to the near post. Idiot. After six minutes, Marcus Rashford is felled by a crunching Fletcher tackle. The ball falls to Robert Snodgrass who plays a quick one into space. Leigh Griffiths is very much in the wide awake club and races onto it, but he’s miles away from goal and Michael Keane is there to shut it down. But Michael Keane doesn’t shut it down. Michael Keane appears to be dragging a caravan behind him. When he does finally arrive at the ball, Griffiths has got there first and he easily turns his man to go clear on goal. And he doesn’t miss. We’re a goal down. I am not amused. 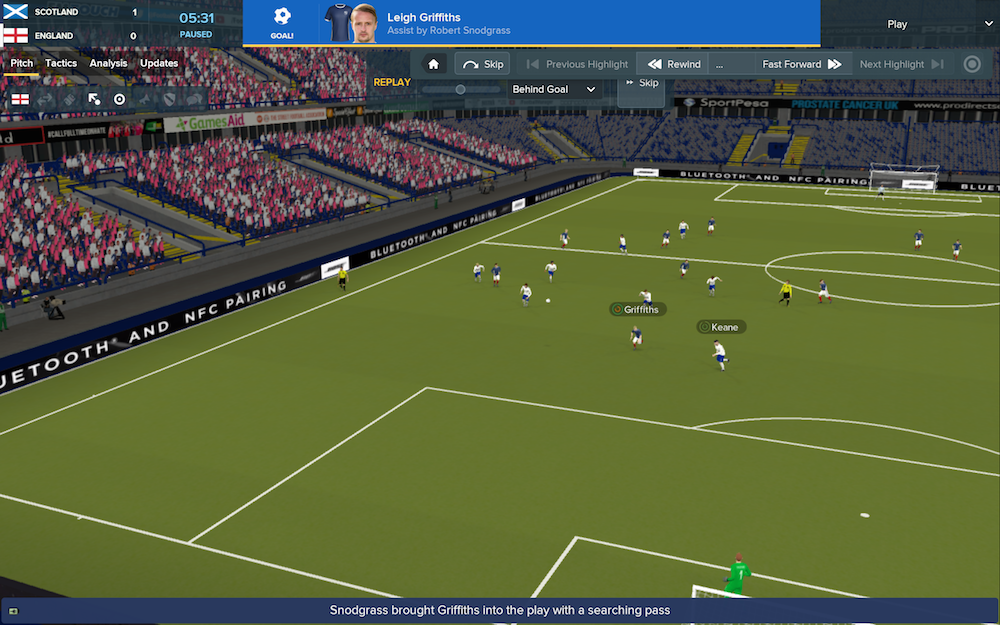 By the time we reach the midway point of the first half we’re still yet to make a single chance. I am incandescent with rage. It’s England against Scotland. It’s a battle, but only one side is fighting. And it’s the wrong fucking battle. I wanted the Battle of Culloden, but this is going like bleeding Bannockburn.

I move Dele Alli higher up the pitch, but switch us to ‘counter’ so we don’t do anything stupid and go two goals down. It makes no difference. The half just seems to ebb away without a single highlight. And then salvation. We win a corner. Another chance to execute our far post ‘big bloke’ overload. Once again, Henderson fails to kick the ball hard enough, but this time Raheem Sterling helps him out, flicking the ball up with a deft header and sending it to the back stick. Keane, perhaps aware that I’m going to have him garrotted at the break, is there to nod us back into the game. Lucky boy. 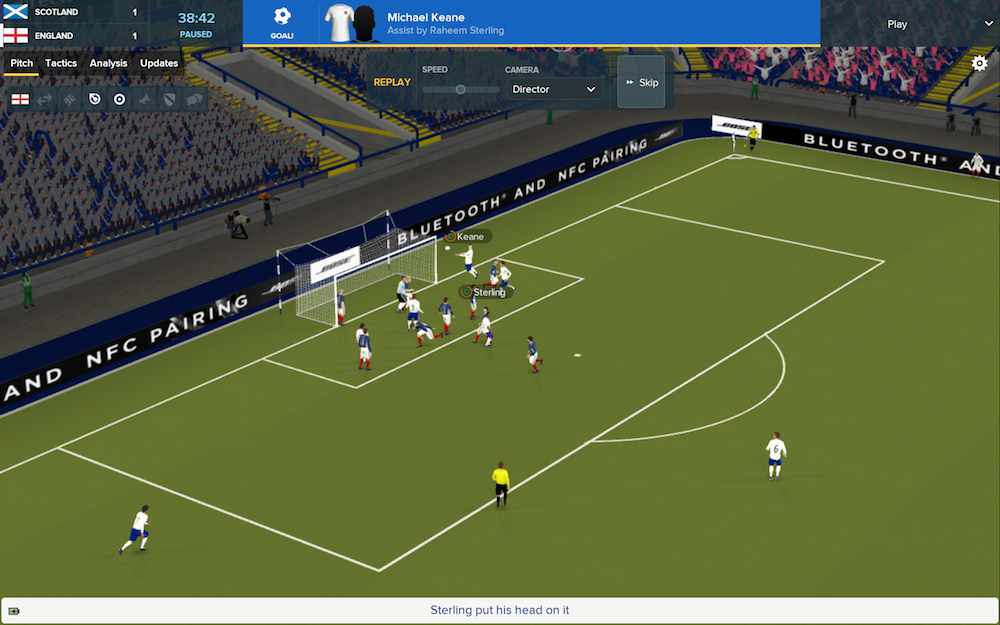 I explode at them in fury at half-time, but when the game restarts it’s Scotland who have the best chances to break the deadlock. When Henderson unilaterally decides we’re now doing short corners, I have to stop myself from throwing the laptop across the room. Desperate now to avoid humiliation, I drop Dier back into the hole and bring on Harry Winks in the forlorn hope that he, young and unsullied, might be able to just get hold of the ball and pass it properly.

Finally, we look competent. Kyle Walker and Sterling link up on the right and Harry Kane smashes a low cross into Craig Gordon from close range. It’s our first clear-cut chance of the game. Scotland look rattled. But then they react. Ritchie is able to break down the wing and when he tosses a cross over, Snodgrass tumbles in the box at the feet of a guilty looking Luke Shaw. Ritchie converts the spot kick. 1-2. This is desperate stuff.

With half an hour remaining, I haul off Dier and push Danny bloody Welbeck on up front. We go to ‘overload’. And still the frustration continues. I planned our fucking corners with military precision and Henderson has turned them into some kind of experimental foot-jazz. He delivers the ball to the near post, he goes short, he goes backwards; everywhere on the pitch except the far post. I have no subs left and time is running out and I am burning crimson with shame. But then with 15 minutes left, the useless twat smashes the ball up the park to Jesse Lingard, he cuts the ball back low and Kane absolutely smashes it into the net. 2-2. 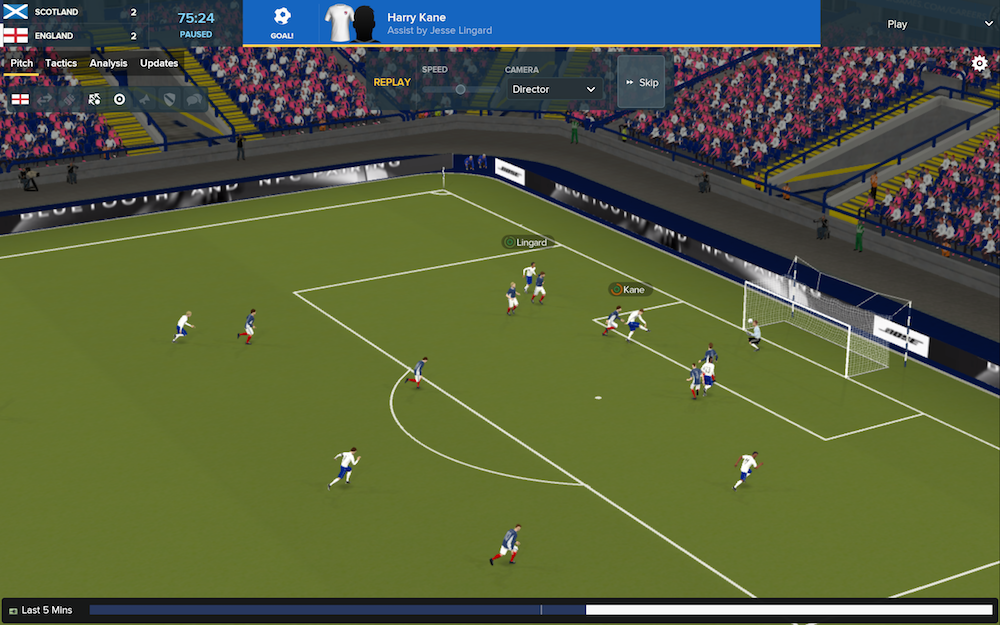 Is that it? Is dignity restored? Of course it’s fucking not. With seven minutes left, Ritchie beats Walker again, feeds the ball into Griffiths and he smashes it past Pickford’s ears. 2-3. I am now openly howling with fury.

No one can do anything right. Welbeck is working hard, but continually makes the wrong decision in any given situation, most notably in the final stages when he decides not to shoot from close range and instead cuts it back to the edge of the six-yard box where there are no England players. Amazingly, it hits Grant Hanley on the shin and bounces over the line. 3-3. 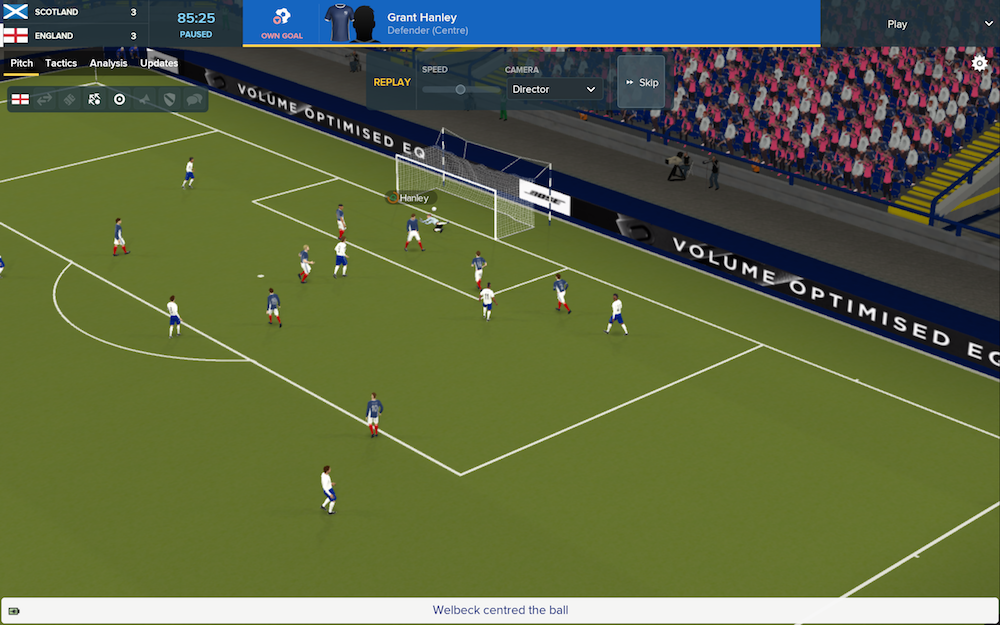 I’m not settling for a draw. I don’t want a fucking draw. It’s Scotland. You don’t settle for a point against Scotland. I implore them to push on and they do so but with such an absence of quality and composure that I can taste the sick in my mouth every time they ruin an attack by blasting the ball at Scottish shins. Henderson’s poxy corners can now only be a clear protest against my ideas and I will have him destroyed for his disobedience. Never mind the fact that the one time the ball went to the far post as requested, we scored; Henderson has other ideas. He may never play for his country again. 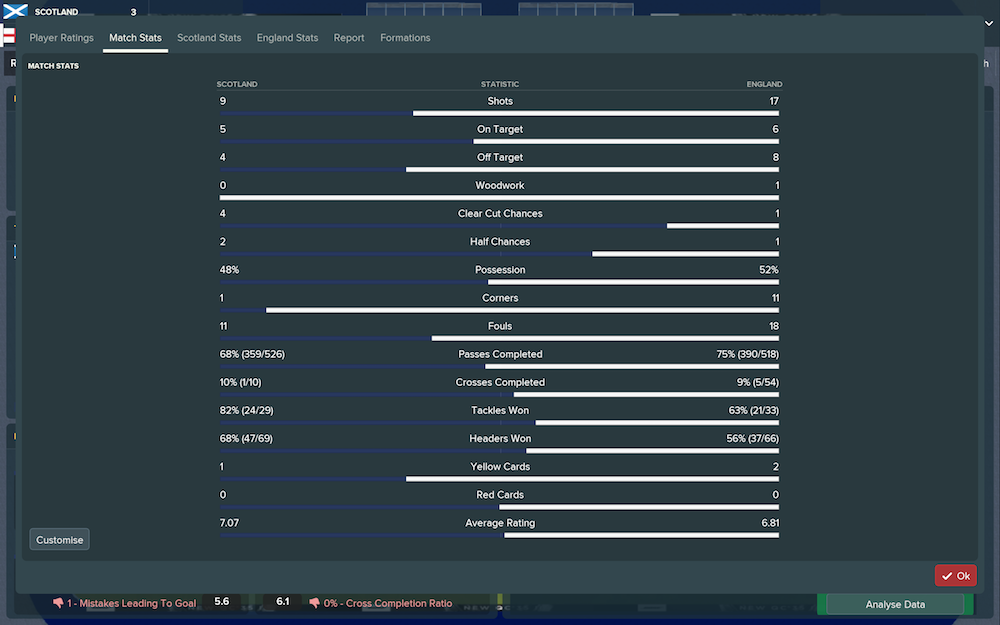 The final whistle blows and I storm down the tunnel. That was a disgusting performance. I have been betrayed. And yet the press seem all right about it. 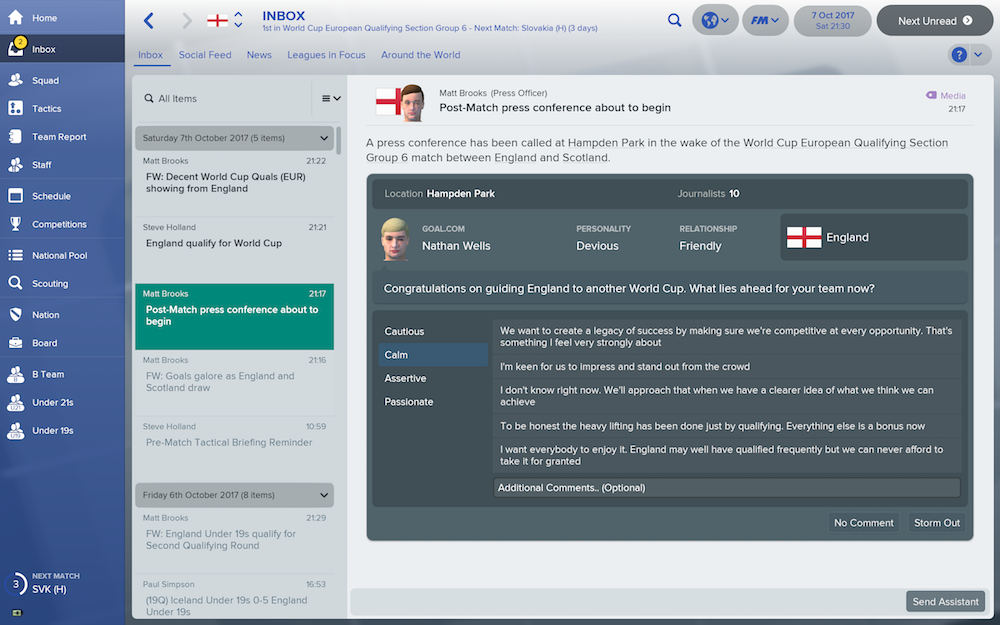