Pierre-Emerick Aubameyang is renowned for his blistering speed but the Gabonese forward looked a broken man  as he stood with his hands on hips just outside the centre circle in December. The curtain had just come down on Borussia Dortmund’s Hinrunde (first half of the season) at the RheinEnergieStadion in Cologne and the frustrated expression of the Bundesliga’s top scorer was mirrored by his team-mates. In the last eight minutes against 1. FC Köln, they’d conceded twice to lose 2-1.

Seeing Aubameyang with a wide smile had been a much more common sight in the previous four months, as he ripped through Bundesliga defences to tot up 18 league goals. On his way, he became the first player in the competition’s 52-and-a-bit year history to score in the first eight games of the season. Even without a goal in that final game of 2015 in Cologne, his tally was mightily impressive. To put it into context, it’s a figure which hasn’t been bettered at the half way stage of a Bundesliga campaign since a man called Gerd Müller did so in 1976.

Over the winter break though, Aubameyang’s toothy grin has returned once again, having been named as the 2015 African Footballer of the Year. Cue popstar treatment in his native Gabon. But now comes the big question – what happens next? 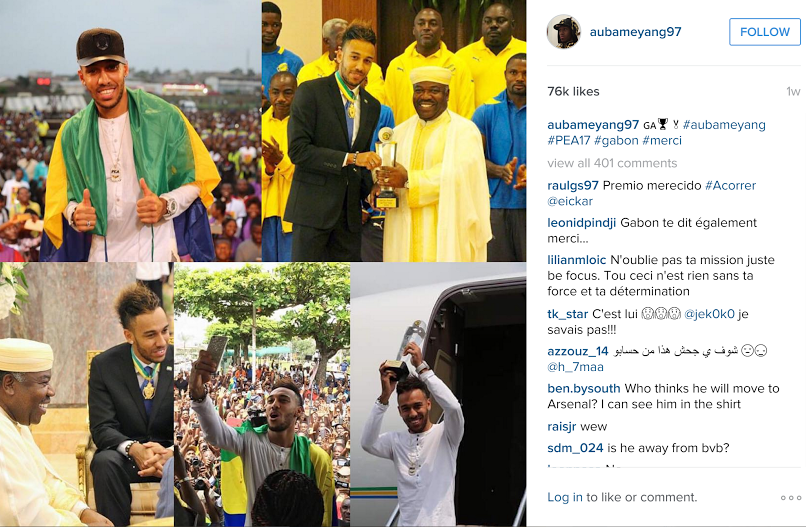 On Friday, the Bundesliga returns with league leaders Bayern Munich heading to Hamburg. Dortmund’s defeat at Cologne means that they resume eight points behind Pep Guardiola’s side – a gap that could stretch to an even more daunting eleven points by the time they play at Borussia Mönchengladbach on Saturday evening.

And yet, in an interview with the German magazine SPORT BILD last week, Aubameyang was asked whether he wanted to take back his pre-season prediction that Bayern wouldn’t win the Bundesliga. “Why should I? I stick to it,” said the striker in what is undoubtedly the boldest claim to be made over this season’s Bundesliga winter break.

As we’ve known for nearly a month now, Pep Guardiola is leaving Munich at the end of the campaign. Yet, the title is still theirs this season. That result at Cologne in December proved how Dortmund can’t quite eke out a result when they’re not on top of their game. Bayern can. And even if Aubameyang keeps scoring at the rate he has been, Dortmund do not have the same consistency to match their Bavarian rivals. Making up an eight point gap on this Bayern side is one thing. The bit where they then have to stay in front is another.

Even though they are the richest side in the land, Guardiola merits credit for keeping the standards so high. Whether it was taking pastries off the menu for the players or telling Thiago Alcantara to change the way he celebrates (as Martí Perarnau wrote in Pep Confidential), no detail is too small for the Catalan.

In the opinion of Frank Wormuth, “Pep Guardiola is an outstanding coach,” as the Germany Under 20s coach told Munich based newspaper Süddeutsche Zeitung earlier this month. “But, with all due respect, he has so far only coached outstanding teams. I would love to see him at an average fifth-division side.”

That hasn’t been the only dig at Guardiola recently. After he dared to announce his next destination as the Premier League, he was condemned for showing a lack of respect to managers currently in place at England’s top clubs. In Germany, the most respected football magazine Kicker detailed on Monday how Guardiola was still in the shade of predecessor Jupp Heynckes, who of course won the treble with Bayern before making way for the former Barcelona man.

Not that it seems to matter to him. “I would rather be remembered for the football my teams play than for the trophies I won,” Guardiola said last week. Bayern’s success under him has been used as a stick to beat the rest of the division with, especially over the perceived lack of competition. Their consistency saw them only drop points in two Hinrunde games. That’s difficult to compete with, but the standard of the league as a whole cannot be labelled mediocre. Whether it was Barcelona buying Marc-André ter-Stegen or Leicester getting Shinji Okazaki, Bundesliga talent is still very much coveted by foreign clubs.

Facing an in-form Juventus will test Bayern in a couple of weeks, but the return of the Bundesliga is up first. The title race may look over, but the battle to be the league’s top scorer isn’t. Bayern striker Robert Lewandowski is only two behind Aubameyang on 16 goals with team-mate Thomas Müller back on 14. Don’t count out Der Kleine Erbse – the German way of saying “the Little Pea” AKA Javier Hernandez. In all competitions, the Leverkusen striker finished 2015 with 17 goals in his last 14 games. The diminutive Mexican didn’t net on his visit to Hamburg though and it is there that Bayern must go on Friday night.

The bad news for Hamburg is that they’ve conceded 36 goals in their last six league games against Bayern. What’s more, they also lost their three friendlies in the winter break whilst coach Bruno Labbadia has seen the injury list mount. Top scorer Pierre-Michel Lasogga even injured his shoulder whilst celebrating in training. He might be back but Bayern should still win comfortably. For the sake of his team and his prediction, Pierre-Emerick Aubameyang will hope otherwise.