A cheeky smile spreads across Julian Brandt’s face. “It’s no secret that we’re going out to celebrate tonight,” the young attacker tells The Set Pieces in the BayArena tunnel. You can’t begrudge him, because right now Brandt is the most in-form player in the Bundesliga.

On the other side of the tunnel a little earlier, the 19-year-old found the net for the sixth game running. His 76-second opener against Hertha Berlin helped secure two things: the first was Leverkusen’s berth in next season’s Champions League group stages after their seventh win in succession. The second was a place in the history books for Brandt, who became the first teenager since Dieter Müller 42 years ago to score in six consecutive Bundesliga matches.

The teenager’s coach Roger Schmidt said a few weeks ago that it is only a matter of time before he’s called up to the Germany squad and, when you watch Brandt, it’s difficult to disagree. He’s quick, stronger than his lean frame suggests, and possesses excellent technique to boot. And yet, for all these qualities, the most admirable thing about him is his attitude. He’s remarkably mature for a young player, with an eloquence that contrasts with the stereotype of the modern footballer.

It was only two months ago that Brandt was barely getting a kick. As he described how he had to wait for his chance, eking the most out of every opportunity in training or on the pitch, Brandt said it was “like a corkscrew which you slowly have to rotate out of the bottle.”

The corkscrew was in no danger of popping either, when on March 2nd Brandt was hooked off at half time in Leverkusen’s humiliating 4-1 home defeat to struggling Werder Bremen. Along with the rest of Schmidt’s injury-riddled side that night, his performance was below-par.

With ten games remaining, Leverkusen were seventh in the Bundesliga, four points off the Champions League places. Up to this point, Brandt had only started nine league matches, failing to play 90 minutes in any. 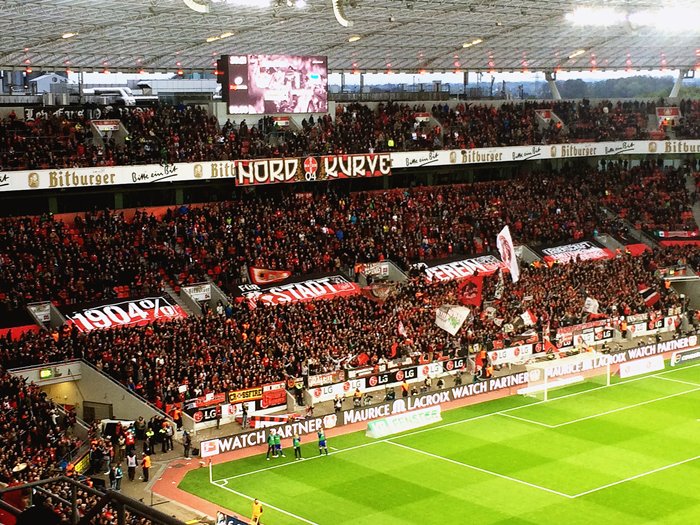 There had been some bright moments but consistency was the main problem. In that regard, his fortunes mirrored Leverkusen’s – something which rings true both before and after their 3-3 draw at Augsburg, the turning point in the club’s campaign. For the first time in Leverkusen’s 37 years in the top flight, they came back from three goals down to take a point, with Brandt swinging in the corner for their second.

Roger Schmidt wasn’t even in the country, let alone the stadium. He was serving the final game in a three-match touchline ban meaning he went off to Spain to scout Villarreal ahead of their Europa League tie.

Despite losing to Villarreal in the last 16, it’s been a different story for both Brandt and Leverkusen in the Bundesliga since that rousing draw at Augsburg. Schmidt’s return to the touchline heralded a 1-0 win over Hamburg with his 19-year-old protégé getting the crucial assist. Six wins on the bounce followed, with Brandt on target in each of them.

“I know that highs and lows are normal at my age,” said Brandt to kicker last week as he looked back on his run. “The expectations on young players are higher because more and more young players are forcing themselves on to the transfer market. If you start well, the bar is raised and we have to learn how to deal with it.”

After a season-and-a-half of promise, it is only now in his third campaign at the club that the consistency and a subsequent run in the side have followed. That’s the message he has for his young adversaries too, such as Borussia Dortmund’s Christian Pulisic. He bumped Brandt down to number ten in the ‘youngest goalscorer in Bundesliga history’ charts, with the American moving into fourth spot thanks to his goal against Hamburg in April.

“Christian Pulisic is the best example. Everyone indulges themselves in his success but he will also go through a phase where it doesn’t work out,” said Brandt.

For his part, the Leverkusen winger is showing why Bayern Munich, Real Madrid and Barcelona were all interested in signing him before he moved to the BayArena from Wolfsburg aged 17.

Even back then, his demeanour didn’t match his age in the opinion of club captain Simon Rolfes. Brandt wasn’t “permanently walking around with his smart phone” nor was he “married to the PlayStation,” as Rolfes put it to the Rheinische Post.

His friends have certainly kept him on an even keel too as Brandt told The Set Pieces on Saturday: “They help me stay grounded when there’s quite a bit about me written in the newspapers. When they think that I’m becoming arrogant, they tell me to calm down.”

When it comes to his team-mates, he’s not afraid to listen either. “Lars Bender [current club captain] once said: ‘You are a real professional if you have played 50 Bundesliga games.’ I think there’s something to it,” Brandt told 11Freunde magazine back in October.

Bender, with 173 Bundesliga appearances, joined his young teammate on the scoresheet on Saturday evening by claiming Leverkusen’s second. Brandt is seven years younger, but he already has 65 top-flight appearances to his name.

He could even be heading to the European Championship this summer. On current form, the youngster surely merits a place more than regulars André Schürrle and Lukas Podolski, but Joachim Löw is known for his loyalty to certain players. If the call up doesn’t come, then Brandt, already a regular for Germany Under-21s, is likely to head to Rio with the Olympic football team.

The only thing he’s guaranteed not to do is surpass Dieter Müller’s record, but that’s only because he turned 20 on Monday. Still, you wouldn’t be able to guess his age judging by what Brandt also told kicker last week: “When I look at the big picture: whether it’s the job, family or health, everything is going well.” The future certainly looks bright for this level-headed youngster.