The football journalist is an odd creature. Minutes after the end of a game, unless deployed elsewhere, they scurry down into the bowels of the stadium, searching for a dark and mystical place called ‘the mixed zone.’

Here, barriers separate the journalists from the cast members of the show. In England, the herd must wait and wait and wait for the players to shower before the majority emerge to blank them. Some players seek to evade this experience by making a fake phone call or donning a humongous set of headphones. 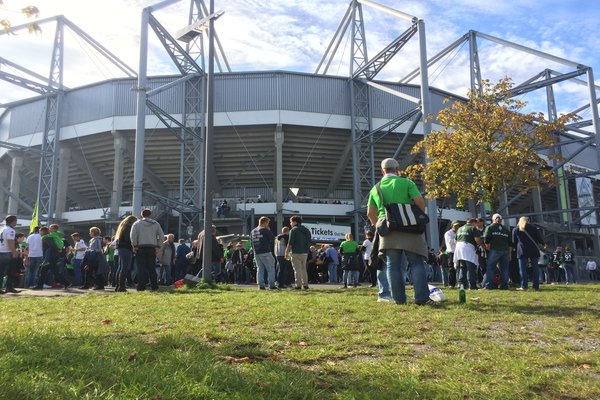 A trip on Saturday to Borussia Mönchengladbach confirmed that the same tricks and the same surreptitious elbowing to acquire the best vantage point. But from here, you could gaze upon wondrous sights like Nicklas Bendtner strolling on past the assembled journalists, clutching a fresh pizza box. He wasn’t in demand anyway, but it didn’t matter as here in Germany, most players will afford you a moment of their time.

After two months in Cologne, I now get the gist of what the players say in German but anything in English is still preferable. Some oblige while others smile at me before taking just as much glee at turning me down – an experience I’m very much at home with. At the Borussia Park though, Klaus Allofs, the Wolfsburg sporting director, stopped by to have a chat “auf Englisch”.

In the mixed zone, sporting directors in Germany are spin doctors, helping the media to quench their thirst for quotes. A sporting director is generally more focused on handling the business side of things, taking the pressure off the coach whilst still being able to offer guidance when needed. These are often former footballers but Allofs is more than that.

Only six players in Bundesliga history have scored more than his tally of 177 goals, not to mention the 56 caps he racked up for Germany. He’s gone on to be a successful sporting director with Werder Bremen and now at Wolfsburg.

It’s fair to say the Gladbach fans are happier winning three on the bounce than losing five.

When I talk to him, with Wolfsburg having lost 2-0 to Gladbach, Allofs is a bit miffed. Referee Felix Zwayer wasn’t popular with his coach Dieter Hecking, who was sent to the stands for berating the official throughout the match.

“There were some strange decisions,” said Allofs. “It started in the first minute when [Gladbach’s Granit] Xhaka merited a booking.”

My eyes widened. The six foot, walking yellow card that is Granit Xhaka was a couple of yards behind him. I dared not tell him. It was more entertaining that way.

Allofs was right. Xhaka properly steamed into Wolfsburg’s Marcel Schäfer early on. The real fluke was that it took the Swiss until just before half time to get booked. Referee Zwayer held up four fingers to the midfielder to tell the Swiss it wasn’t just for his latest mistimed tackle. 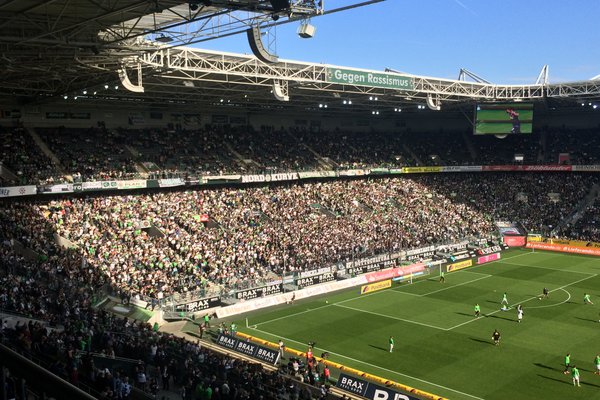 For the discipline he lacks, Xhaka makes up for it with the way he prowls about the pitch. He claps both arms above his head to demand the ball from goalkeeper Tobias Sippel on one occasion. This love of responsibility is an endearing quality. In turn, it is no coincidence that when he fires, Gladbach do too.

That’s what happened on Saturday, but Allofs is more concerned by what he describes as the unaffordable little mistakes Wolfsburg are making. The first one came fifteen minutes from the end. Lanky defender Timm Klose couldn’t stop the ever tricky Brazilian Raffael from chipping the ball to former Arsenal midfielder Havard Nordtveit. From 20 yards, the Norwegian slammed home an unorthodox half volley to make the stadium shake.

Was it one of the best of his career? Well to find that out, certain mixed zone tactics had to be used. Namely, politely enquiring to one of the smartly dressed figures wearing a Gladbach blazer if, after dealing with the German press, Mr Nordtveit wouldn’t mind an ever so brief word in English. I get a nod, because, I think, I managed to ask in coherent German.

When Nordtveit arrives, he briefly ponders before agreeing that it certainly was one of the most important strikes of his career. The pile up of bodies that he was under after scoring caused him to blackout a bit, he says. Those were not to be the last exuberant Gladbach celebrations.

Five minutes after that strike, another unaffordable mistake, as Allofs would put it, arrived. Wolfsburg’s Josuha Guilavogui gave the ball away near the half way line, so Lars Stindl sent the rapid Ibrahima Traoré through on goal to make it two nil. A bald figure in a green hoody delightedly raced onto the pitch to celebrate. To be fair, it was interim coach André Schubert’s third win in three Bundesliga games and the chatter after the game was whether the job should be his full-time.

“Why do we need a new coach?” said Xhaka to my huddled German colleagues. Even in the midweek defeat to Manchester City, they’d performed well and Xhaka’s argument resonated further after another one with a better result. 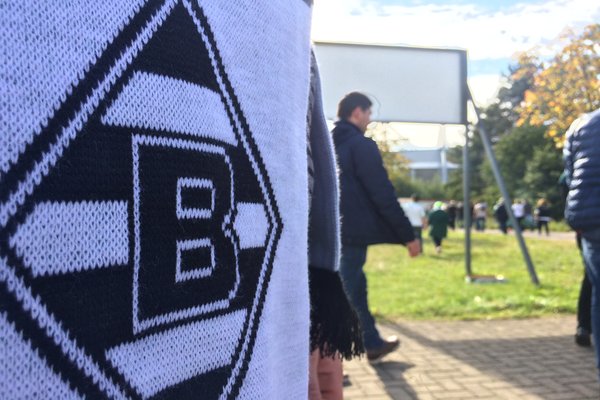 The situation with Wolfsburg is trickier right now, particularly off the pitch given the recent scandal with owners Volkswagen, but Klaus Allofs thinks the ambitions will still be the same for the club, even if the football team is, as he puts it, an image vehicle.

On the pitch meanwhile, defeats to Manchester United and now to Gladbach left them four without a win. “We are not a team which goes for the title,” said Allofs. “This is Bayern Munich and we are not that far in our evolution. What we have to show this season is that we are belonging to the two, three or four best teams in Germany.”

Kevin De Bruyne’s departure to Manchester City in the summer affirmed that, though a laugh was at least raised from Allofs when mentioning that he’d scored for Manchester City on Saturday. Still, Wolfsburg were the second best team in Germany last season, so I was surprised by how openly Allofs was willing to admit defeat to Bayern Munich already.