6 Fun, but without depth

Every now and then, we’re told that board games are enjoying a renaissance. That some external factor like the recession, the smoking ban or the ludicrous cost of a pint in certain pubs near this office (ED’S NOTE: £5.15 for a pint of lager?!) has sent us all scurrying back to our living rooms to blow dust off the Monopoly board. There’s some truth in it too. Amazon reported that board games sales in the US enjoyed a ‘double digit’ percentage sales rise between 2012 and 2013. Independent board game makers have prospered and a board game cafe opened up in London in 2014. With the help of the internet, it’s easy to find more complex, sophisticated games like Settlers of Catan or Dead of Winter, But what about football? Is there anything out there that can compete with FIFA or PES?

Socceristic, designed by former teacher Keith Mallett, certainly has a bloody good go. It has one piece, a white plastic ball on a plinth, one dice, two sets of cards, a double sided sheet of A4 instructions and a fold-out board that looks deceptively terrifying. Indeed, a cursory glance at the rules and the many clauses and sub-clauses is enough to bring on a migraine. It’s all misleading though. Even those of us who have to stick our tongues out of our mouths when we change plugs can cope with these instructions. In ten minutes, you’re in a position to teach other people how to play without anyone getting unnecessary nosebleeds. This, however, is as much of a blessing as it a curse.

The game itself is very simple. You roll a dice to determine how far the ball moves across the board and small arrows determine the direction. There are various squares that open up scenarios which are determined either by the overturning of a card or the roll of a dice. When you manoeuvre the ball into a shooting position, an ‘outcome’ card tells you whether it went in or not.  The problem is that there are very few occasions when you feel that you have much of an influence over proceedings beyond simply rolling the dice. This isn’t unusual in a board game. Snakes & Ladders is about rolling a dice. Craps is about rolling dice. They both seem pretty popular. But when set against the strategies that you might be forced to develop in, say, the rebooted version of Escape from Atlantis, this feels a little basic.

The best place to test a board game is, of course, in a pub that doesn’t try to charge you £5.15 for a pint. Somewhere warm, welcoming and reasonably priced like North London’s lovely Tapping the Admiral. We set up a four team mini-league there with guest players Carrie Dunn and Nick Miller from the big papers and played a series of five minutes each-way matches. Sharp as tacks, the pair, they mastered the rules very quickly. Perhaps too quickly. 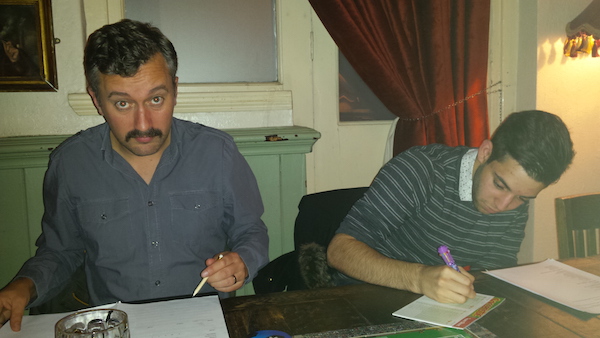 The game’s strongest asset is the use of team sheets and dice rolls to determine goal scorers, injured players and those miscreants who are booked or dismissed. You can fill in whoever you want, from a 18 man squad of your mates to the current Manchester City team. We handed our competitors appropriately selected ‘classic’ teams, allowing them to choose their line-ups from 18-man lists. We laid down a prize (a nice bottle of ale) for the top goalscorer, along with a prize for winning the tournament (a nice bottle of wine). We also enforced team changes as the tournament progressed, removing injured and suspended players. In short, we made it as realistic as possible. And then we got started. 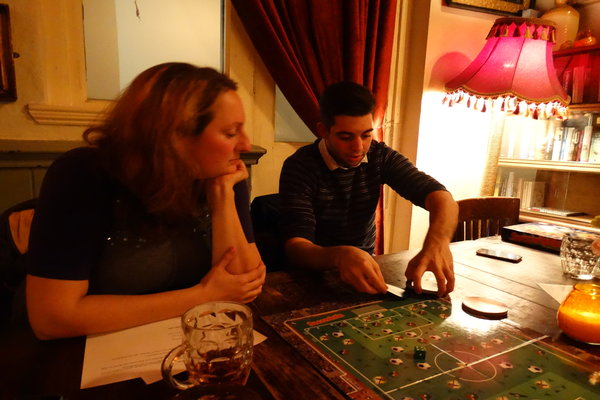 The shortcomings were evident immediately. Within 10 seconds, my Southend United 05/06 team had opened the scoring against Carrie Dunn’s helpless Luton Town 88/89 side. By half-time, she was 2-1 up. It ended 4-2 with Kevin Maher and Adam Barrett sent off and Tim Breaker and Steve Foster injured. And yet neither of us had really done anything more than roll the dice, turn a card and fistpump when Mal Donaghy or Efe Sodje scored.

As a simulation of a game, Socceristic is excellent and obviously designed with painstaking attention to detail. Throw-ins and corners and free-kicks all have different procedures, all carefully weighted for realistic-feeling outcomes. But while there are a limited number of situations in which a decision of some sort is required, for example the direction in which to take a free-kick, you get the feeling that two robots could play the game and reach roughly the same result. 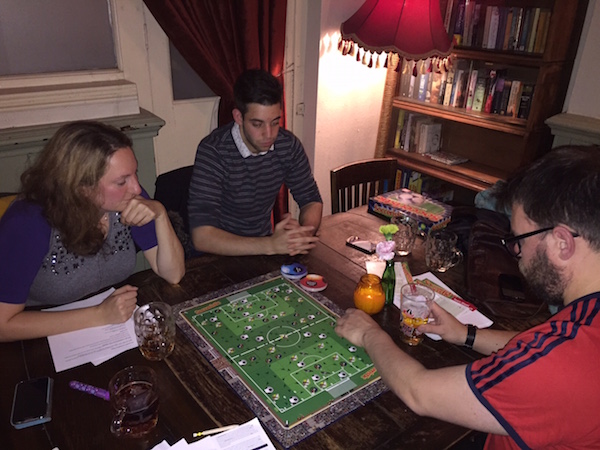 This isn’t a fatal flaw and it certainly doesn’t stop you from spontaneously celebrating when you score, but it does limit longevity. Of our guest players, only Nick Miller said that he would happily play it again and we suspect that’s simply because he won. Sadly, the greatest pleasure in playing Socceristic is, as Carrie Dunn put it with more than a touch of the macabre, “bringing dead footballers back to life and shouting their names again.”

Socceristic is fun, and it’s the sort of game you could happily play with kids aged between about 6 and 12, on the off chance you can tear them away from Minecraft. But it’s not the kind of thing for which you’d set up a mini-league and play on a regular basis. It’s not the kind of game that would leave you wondering where it all went wrong, or have you up at night plotting new strategies. There may one day be a football board game that can do all of that, but for now, Football Manager is safe.