It’s the final thirty seconds of the match and the score is tied. You’ve decided to hang back around the centre circle to offer some cover to your teammates desperately attacking the right flank, just in case they lose possession and you’re forced to defend a sweeping counter. Suddenly, the ball breaks free from the wing and hangs in the air. You know that there is enough time to break forward from the centre of the park, launch yourself at the ball and possibly score the winner. But if you drive forward and miss, then you’ll leave your side woefully exposed. What do you do?

Moments like this regularly occur in the fabulous Rocket League, because it is a wonderful football game. And this is despite the fact that you’ll never actually kick a ball during the entire time you play the game.

Because, you see, Rocket League, developed by Psyonix is a game played entirely in rocket propelled cars. Teams of players contest five minute long games of football from behind the seat of a car that doesn’t just have a rocket jet slapped to the back of it; your car also has a double jump function so you can cartwheel through the air. Like a regular game of footy though, the team who scores the most wins and it’s down to you and your team mates to stick the ball in the net more times than you concede.

The rules of football aside, it’s hard to escape the feeling in your first game of Rocket League that it isn’t all just a bit gimmicky. Vehicle football has been seen before in the likes of PS One Mario Kart clone Street Racer and Excitebike 64, but only as a semi-jokey additional game mode that will be ignored after a handful of tries. 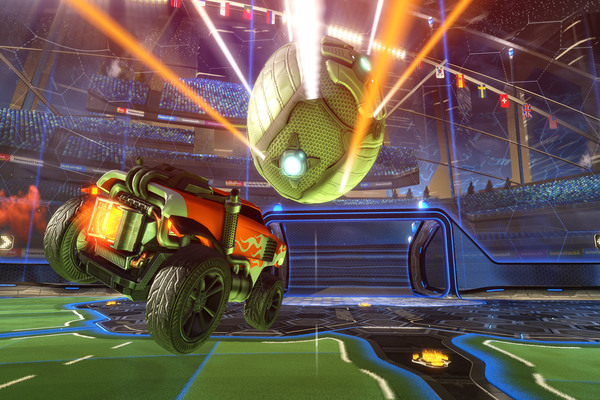 Basing an entire game around it feels like it could be a mistake then, especially when you dive into your first full match. After having your hand held through a quick tutorial to explain how exactly control your tumbling futuristic jet car, you’ll emerge into one of the worst first matches ever seen in a football game. As you and a handful of other rookie players tumble aimlessly after the ball – like primary school children drunk on fizzy pops and the wild hopefulness of youth – Rocket League certainly feels fun but it doesn’t necessarily encourage you to think of it as anything other than a gimmick.

However, it only takes a handful of matches before that perception rapidly changes and Rocket League reveals itself to be a remarkably compelling football game.

The most obvious reason it gets better, is that you get better. As you play more, you begin to get a handle on just how tight the jump function is on the car and how much control it gives you on the ball. And once you get the hang of that, you’ll find yourself casting off your primary school eagerness in favour of waiting to influence the play in a meaningful way.

Then, the game subtly begins to teach you how to get productively involved in the game. To help calculate the man of the match award and reward the best players with the best post game swag, Rocket League features an individual scoring system that encourages good play. Goals and saves are obviously rewarded, but points provided for, say, centering the ball reward you for play that leads to more goals.

And this leads to players rapidly and naturally developing tactical systems to deal with problems. Helped by a rudimentary, but useful, messaging system, you’ll see in games played with total strangers online the evolution of basic tactical play. Cars are left back to defend the goal or attack the ball from deep, forcing you to consider what’s going on beyond the ball and what’s going on in the game as a whole.

It’s that which helps Rocket League to suddenly become a brilliant representation of what football is. Sure, differences exist. There aren’t any fouls in the game, matches last only five minutes and, erm, every single player is behind the wheel of a futuristic car usually boasting a novelty hat they’ve earned in game. 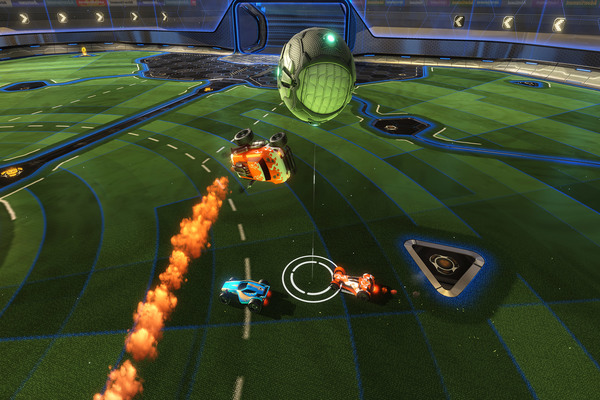 But it feels more of an authentic representation of what playing football is actually like compared to its illustrious rivals. Pro Evolution Soccer and FIFA are both brilliant at what they do, but what they do isn’t representing football at its purest. They’re both, to different extents, one part TV show and one part football strategy game.

Rocket League, on the other hand, makes you feel in the thick of the action. In a tightly contested end to end tie, you feel genuine elation when you score a screamer and despair when a mistake costs a goal. Whether you’re playing a ranked match or amongst friends, Rocket League makes you feel like you’re in the thick of a football match and, by jove, are you going to try to influence proceedings to leave you a champion.

Of course, it isn’t a perfect experience. Single player offline play is practically pointless as the bots, though serviceable when someone drops out of an online game, don’t present a real challenge. In terms of game modes, 1v1 and 2v2 simply lack the depth of 3v3 and 4v4 as you’re left too exposed in the smaller matches to really play properly. Also, defensive play is arguably not rewarded enough. Not only are there less points for a save, but making a demolition (where you temporarily blow up another car by boosting into it) is rewarded with nothing. It might not seem like much, but it does mean players mastering the dark arts don’t get the in game credit they deserve.

Truthfully though, these are minor quibbles. Rocket League’s premise might be bonkers, but at the heart of the game is football crystallised into its purest form. If you want to play a football game and simulate what you see on the television, Rocket League isn’t your game. But if you’re wanting to play a game that makes you feel like you’re on the pitch and fighting for victory, then Rocket League will definitely be right up your street.

Rocket League is available on PS4 and Steam