It was supposed to be simple. Following a disappointing finish to the 2014/2015 season in which I came a full 371 points behind the global champion, I entered the 2015/2016 campaign brimming with confidence.

Armed with the conclusions from wide-ranging analysis of the previous season – which I conducted throughout the summer of 2015 – the theory was that I should be able to easily rise above nearly four million other Fantasy Premier League (FPL) managers and crack into the top 10,000 at the very least.

Perhaps I could aim even higher – after all, I had just finished around the 54,000 mark, and now I had a powerful tailwind of a data-led strategy.

For the uninitiated, the FPL is an online fantasy football game provided by the Premier League for free (there are other platforms available, of course). The premise is that you pick a squad of 15 players for £100m, playing 11 each game week and accumulating points related to their individual success.

Goals, assists, clean sheets and bonus points for the best players are all up for grabs, and really the only pitfalls are points conceded for yellow and red cards, infrequent events like own goals, and the risk of your charges being dropped by their real-life managers.

There are occasional curve balls to contend with – wildcards, chips, captains, etc., some of which I’ll discuss – but on the whole, it’s an easy game to play. Trying to master it is a completely different question.

It's here! #FPL has now launched. Here's our Jonty's first draft. Feel free to share yours with us. #ffscomm pic.twitter.com/S9NfKWiGjc

A disastrous bout of hubris towards the end of last season ruined my chances of an impressive finish. I plummeted back down the rankings and, although I was already well on the way to finishing a demoralising 248 points behind the eventual champion, my mistakes quickly put paid to the ambition of reaching the top 10,000.

However, I can say with some justification that a season-on-season rise of nearly 21,000 places and 111 points counts as progress and, right up until the point Jurgen Klopp started trolling me with his rotation policy, the analysis I conducted before the start of the season served me well.

So this summer, I’ve gone deeper into the stats in hope of better understanding the game. I have blogged about my findings extensively, and will endeavour to give a clear idea of the mathematics and statistical techniques here.

My friend’s reaction when I tried to explain the finer points of the analysis to him was “stop taking the fun out of my life,” which I interpreted to mean that this sort of thing may not have widespread appeal…

The objective of endless summer number-crunching is to inform an overarching strategy and some guiding principles with which to approach the season. Analysis of data is meaningless without context and worthless without insight, so with that in mind I have related my findings to a plan for the coming campaign.

This is not necessarily the best strategy – and I cannot stress this enough lest the baying hoards of the internet inundate me with their collective ‘displeasure’ – nor even a revolutionary one. There are thousands of serious FPL players with countless competing strategies, some proven to have brought success.

This is my attempt to draw order from the chaos of more than 44,500 Opta data points and translate it into something useful – namely a theory which I can test, monitor and refine as the season progresses.

How complete a theory it is will only be evidenced come the end of the season.

“Follow neither points nor form of the opposition. Use underlying metrics as the guide.”

The main body of the analysis I have conducted this summer has concluded one major thing: that recent points totals have little relationship to a player’s potential points total in the new season.

What I have found, however, is that when aggregated over the course of the season, there is a strong correlation between certain ‘underlying stats’ for each player and their FPL points total – for example, a striker’s shots on target ratio can be an indicator of how they will perform in FPL.

These underlying stats are ‘causes’ illustrating a player’s actions on the pitch, and are easier to predict than the ‘effects’ – such as goals, which are rare occurrences.

There were 989 goals in the 2015/2016 season, whereas the number of shots on target (6,308) exceeded that total by more than six times. If a striker has scored no goals in the last four games, we may instinctively look to others who have been finding the net. But if we know an individual is getting into the right positions and registering plenty of shots on target, we should really assume a goal is due. (I will describe what this means for each position in Part Two.)

This alternative criteria for assessing a player’s potential goes beyond the limited analysis of how many points they have scored previously and who they are playing. If a player has been consistently accumulating good underlying stats but has not been rewarded with FPL points, then this increases his probability of being undervalued in the market and scoring points in forthcoming weeks.

In many cases, we know that the underlying metrics will align with the FPL points total over the course of the season. 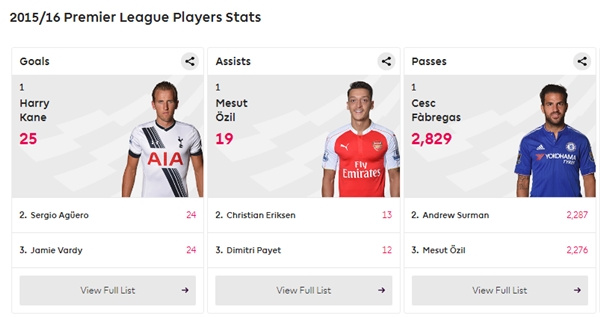 “Narrow the field of positions subject to transfer rotation.”

Every week in FPL a manager is given a free transfer, where any one of their 15 squad players can be replaced by another, providing it satisfies the rules (within budget, maximum three players from each club, equivalent position).

While this may sound like a good thing, it can be restrictive without long-term planning when a squad can only be completely refreshed once every 15 weeks on average (there are escape routes from this scenario, such as two ‘wildcard’ weeks of unlimited transfers and a four-point fine per additional transfer – neither of which should be used lightly).

The analysis will provide added data points for long-term planning, meaning that a player can be brought in and retained for longer if the characteristics of his play are conducive to long-term success.

This means that the precious free transfers can be focused on a select few positions – namely the strikers – which are less easy to predict and can be subjected to heavy rotation. To put it another way: I don’t have to fret that I can’t bring in a big hitter like Sergio Aguero this week because Geoff Cameron twisted his ankle last week.

So this is the outline of the theory: use data analysis to develop a strategy and guide weekly tactics. In Part Two, I will look at what this means for picking each position.