So, you got Football Manager 2016 for Christmas and it’s not going well, huh? Join the club. This game is incredible, but it is as hard as nails. The AI is more sophisticated than ever and it takes no prisoners. Don’t worry, you’re not alone. Even seasoned players are finding it tough going. (EDITOR’S NOTE: He’s right. I cry at night.)

Fortunately help is at hand. Using my long experience of playing the game, and my even longer experience of nicking tactical advice from guests on The Deep Lying Podcast, I’m here with some simple advice on how to get ahead of the game.

Having an idea what type of club you want to manage, how you want your team to play on a strategic level and how you want to set them up tactically is crucial. That’s because you can shape the game world and your managerial personality to your advantage. Say you want to take over at Ajax and return them to the top of the European tree with a total football inspired 4-3-3. You could simply load some leagues up, jump into a save and see what happens. 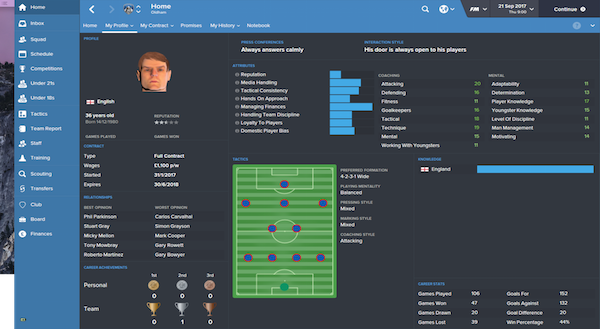 Or, you could get ahead of the game. You could invest points in your manager creation screen into attacking and tactical coaching. You can pick 4-3-3 and its variants as your favoured tactics to help you coach them. You could even load up a selection of Eastern European leagues to purchase technical, but hard working and reasonably priced talent to support you.

Making a plan at the outset of your game will help you greatly in your pursuit of FM greatness. Of course, you’ll need to adjust it along the way. But putting your anchor down early will help you to make hundreds of decisions further down the line, simplifying your life immeasurably.

Gareth Millward, arguably one of the finest Football Manager players in the UK, has written extensively about Football Manager. His most recent advice on the excellent SISportsCentre, (which I’ve found to be particularly useful) has been extremely pertinent: keep your tactics simple. 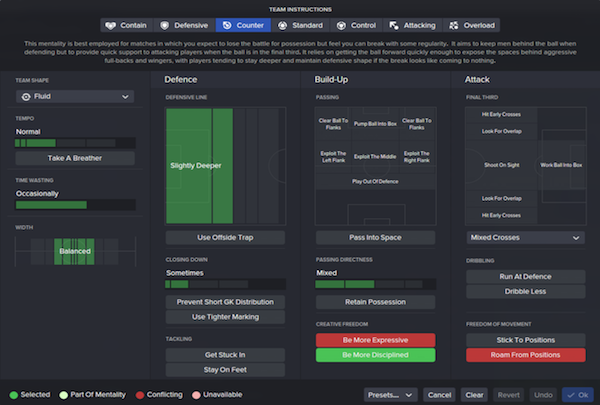 That might seem obvious, but FM16 has a habit of luring you into over-complicating things. The sheer volume of team and player instructions encourage you to nanny your players, fussing them as if they’re kids getting packed off on the morning school run.

However, over-complicating things causes two big problems. First, it has a tendency to stifle your players and make their play too predictable, (*coughs* Louis Van Gaal *coughs*) secondly, using too many instructions removes your ability to make changes when things are going badly. If you’re already using ten instructions, switching one off to try to win a game isn’t going to work.

Simple tactics with fewer instructions seem to work well across the board. By focusing more on the mentality you choose, the player roles you select to support it and the players you use to interpret those, you’ll find a simpler approach will give you more flexibility in every match you play.

3) Recruitment: it’s all about networking

In The Numbers Game, Chris Anderson and David Sally showed that a football team works a lot like a rocket ship. If it all fits together right, it’ll blast off. But if one piece isn’t fit for purpose, that can cause serious problems.

Essentially, what that means is you need to make sure that your weakest link is as strong as possible by recruiting well. What that means will vary from club to club, but there are a few things you can focus on whatever background you’re from.

First, you’ll want to build your scouting network so you see as much of the available talent out there. The obvious way to do this is to hire more staff, but at smaller clubs you can use board requests to scout more of the world and take advantage of affiliations with big clubs to piggyback their knowledge.

Second, you’ll want to build up your youth academy as much as possible. It can be difficult to convince boards to spend on youth recruitment, on more staff for the Under 21s or on facilities. Nevertheless, you can still improve your youth players by either blooding them into your side or actively looking for loan moves for them to raise their quality.

Third, and finally, you’ll want to know what type of player you’re looking for. In previous FMs, that’d mean sauntering through the stats and picking out players who matched certain attributes. While that’s still part of the way things work, individual specific information such as mentality, preferred roles and Prozone stats all play a role in recruitment – meaning you need to have a more holistic approach to looking at players.

You need to spend time recruiting the right players. Use the Searching the Stats methodology from Chris Darwen to give you a head start, but remember to always think about how the player your signing will help you meaningfully improve on where you’re weakest. Sure, it’s a bit dull to be so functional. But it’s how you, slowly and steadily, get better as a side.

Speaking of steady improvement, you’ll want to support your players by making sure they improve over time. The most obvious way to do that is through training. The simplest way to start is by hiring the right staff. Take a look at the staffing screen to work out where you’re weakest and start bringing in people who have high quality attributes, who have a positive personality such as ambitious and whose preferred approach suits what you’re doing. 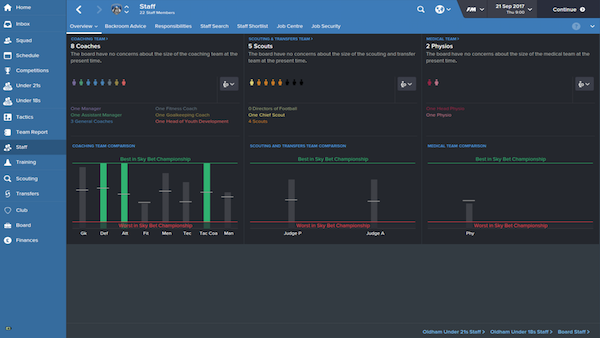 Once you’ve got the right people, it’s then about getting them in the right places. If you’ve got an obvious deficiency in defending training, it may seem that the best course of action is get all your coaches on it. But it actually makes more sense to have a slightly bigger staff of specialists to cover all the categories. It’s tough to do, especially on a budget, but it’ll make it much more likely that you’ll achieve those elusive 5 star training ratings down the line.

Finally, you’ll want to make sure that your weekly and pre-match training is actually helping. As a general rule of thumb, fitness is mostly useful in pre-season, team cohesion during/immediately after a transfer window and attacking or defending options tend to be easily rotated between home and away games. But you should always consider what’s going on in the game world before you set your training up first. If, say, you’re conceding a lot from corners, it’s pretty dim not to do anything about it.

When you’ve established a basic, simple shape that works, you’ll want to gently tinker to make the best of your tactics. Unlike earlier editions of the franchise, FM16 does not have a ‘magic bullet’ tactic. There aren’t glitches that can be exploited to guarantee success. It all comes down to checking on your tactical performance and improving it. 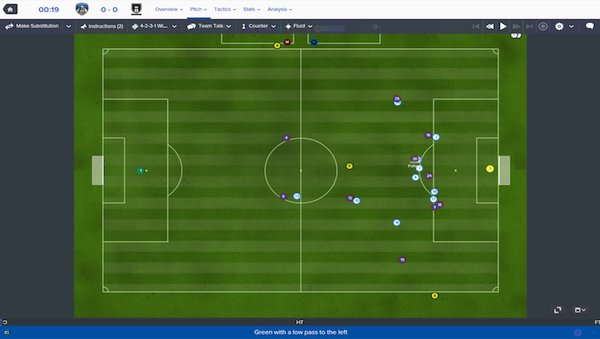 That can be tricky. My Oldham side has been creating fewer than ten chances a game for most of the Championship season, but as we’re a counter attacking side and nearly half of the chances we’re making are clear cut, it means it’s working well.

But in general, there are three areas to focus on. First is the team report screen. That shows you how you’re conceding goals. Second, there’s the squad screen, which’ll show you who is in and out of form, and who might be contributing to your downfall. But third, and most important, you need to watch what is going on during games. Where is your defensive line? What movement is working up front? What is your attacking winger actually doing when out of possession?

The only way you’ll find this is by watching match highlights and, as tipped by FM Community member Shrewnaldo, pausing during attacks and counters to physically see what’s happening. By doing that, you can begin to fine tune your roles and ensure that people are doing what they need to do.

Ultimately, being great at FM16 is bloody hard because being a football manager is bloody hard. Balancing long term stability with short term success is a right challenge for the professionals, let alone us virtual impersonators. But by knowing what you want to achieve, using the resources the game gives you for free, spending time analysing and assessing, you might just have a chance to achieve success.

The Deep Lying Podcast is a weekly show that is all about Football Manager. It comes out every Friday and can be found on Soundcloud, Acast and iTunes.