As each iteration of Football Manager gets more realistic, it also becomes more difficult to master.

The level of detail can be daunting even for seasoned gamers, but that doesn’t mean fairytale stories are a thing of the past. Not by a long shot.

Take Jamie, FM Scout’s resident Football Manager…manager. His Blyth Spartans save, live-streamed on Twitch, has gained him a cult following on the back of a remarkably successful eight-year spell in the hot seat. Beginning in the National League North, the sixth tier of English football, Jamie won the Premier League and Europa League with Blyth in the year 2025.

Not bad going, we’re sure you’ll agree. We caught up with Jamie to discuss his remarkable Spartans adventure – and, for everyone else’s sake, ask for a bit of help.

WE DID IT! We won the Premier League and the Europa League with @Blyth_Spartans on @FootballManager

What a season and thank you for your support, next – The Champions League! pic.twitter.com/jPqKykqO7M

“The first thing you should do is look through the team and find the formation and roles that are right for the players,” says Jamie. “There are so many variations of roles and tactics in today’s game it’s impossible for me to tell you which tactic is best, but I can give you a general overview.”

Jamie frequently preaches pragmatism, particularly when managing at a lower level, and is surprisingly simplistic with the level of tactical detail he applies to the team. “Keep it simple, especially with player instructions and team instructions. Try and avoid team instructions which ask too much, for example, ‘pass into space’. Unless your players have extremely good passing, lots of passes will go to the opposition, resulting in a possible counter-attack.

“Another one I don’t tend to use is ‘be more expressive’, which requires a very talented team. In the Blyth save, I was using ‘narrow’, ‘shorter passing’, ‘prevent short GK distribution’ and ‘use offside trap’, again keeping it simple.” 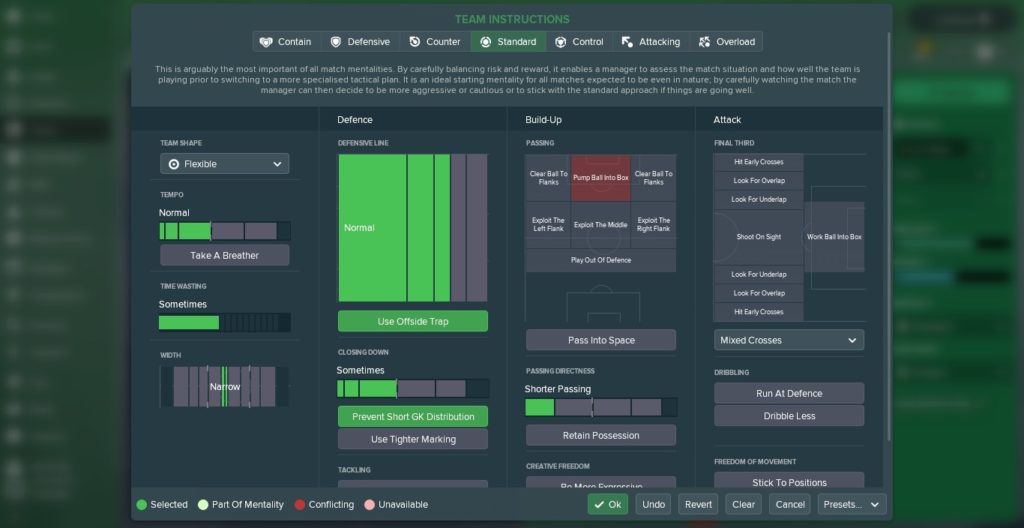 There aren’t any loop-holes that exploit the game’s match engine? “There is only one I’d recommend: the AI struggles to cope with three strikers up front.”

Although there isn’t a one-size-fits-all set of instructions, Jamie suggests looking closely at ‘player traits’ to determine how to play. “Once you’ve selected the roles and formation, watch the first few friendlies on ‘extended highlights’ to get a feel for the team. This way you can see if something is going wrong: is your winger constantly shooting when cutting in? Then add ‘shoot less often’ into his player instructions. Most players have traits which go against your player instructions.”

OK, so there aren’t any shortcuts – as a certain Iain Macintosh will know only too well. But Jamie did give one piece of advice that appears to offer an advantage in the game. “Once I’ve selected my tactic I will put it in all three (tactics) slots. This means the players learn the tactic much quicker. If you do this on day one, you will probably have full familiarity by the first game of the season.”

But once the initial setup is complete, you don’t need to be tweaking things mid-match, something most of us are probably guilty of. “I don’t tend to do much in-game, apart from changing the main approach – from ‘counter’ to ‘attacking’, for example.”

“Signing the right players is probably the biggest aspect of the game,” Jamie continues, before stressing the importance of understanding the specific roles your squad already has covered. “I spend a few hours looking at every single player I have and see what roles they play. From here, I usually have a list of the key players I need based on the formation I have chosen.”

When finding talent, Jamie has one particularly eye-opening tip. “I have a technique for loans which not many people know about: team reports. If you bring up the Premier League table, for example, and right click the club, you can get a team report from one of your scouts. This will send a list of players to your inbox who are interested in joining.”

Head here for our guide to scouting

And Jamie’s a big advocate of loan deals. “I fill out my team with as many loans as possible to avoid spending money on wages. When you’re in the lower tiers you must never overspend; it will hurt you a few months down the line. I don’t tend to spend a penny until I’m at Championship level.”

And it isn’t just a scout’s ‘team report’ that can increase your pool of knowledge. “I also use my Director of Football quite a lot to suggest transfers; I have had some absolutely fantastic players suggested by my DoF. Always scout them because sometimes they’re terrible, but occasionally they will suggest a really good player. I do this around seven times per pre-season.”

A recurring theme is relying on your staff. Your assistant manager, for example, can be left to deal with training. Basically: don’t be afraid to seek help from those around you.

“This one is extremely important in succeeding as a lower league club. If you have players that are valued highly I would suggest cashing in and making a profit,” says Jamie, somewhat ruthlessly. “If you can keep him and believe he can perform in the league above, by all means try and tie him down for another year. But if he wants to leave, let him. ‘Squad dynamics’ come into play this season and a player who’s making other players unhappy shouldn’t be at the club.”

Jamie’s Blyth Spartans game involved an enormous turnover in playing staff every single season of his eight-year career. “Many people who watch me know if I find a great player in the National League, chances are he will be sold by the end of the season – provided he’s wanted by bigger clubs who are willing to pay the money. This will enable you to have a good bank balance and massively helps in the wage budget the following season.”

It might sting, but selling your best players is, sadly, the most effective way to surge up the pyramid.

Once your tactics are set up and the transfer market is closing, the most important aspect of the game is managing your squad of players – and this is where Jamie’s loopholes come into their own.

“Many people don’t know that the AI doesn’t rotate and will always play the strongest squad, even in the Premier League,” he says. “They will probably be starting their best players at around 80-85% even when the fixture list gets pretty crazy. If you rotate regularly, so players only play when around 95% fit, you have a huge advantage and a much greater chance of victory. I rotate my teams quite a lot in the lower leagues, where fitness is a huge thing; a great fitness coach and frequent rotation are things I live by. 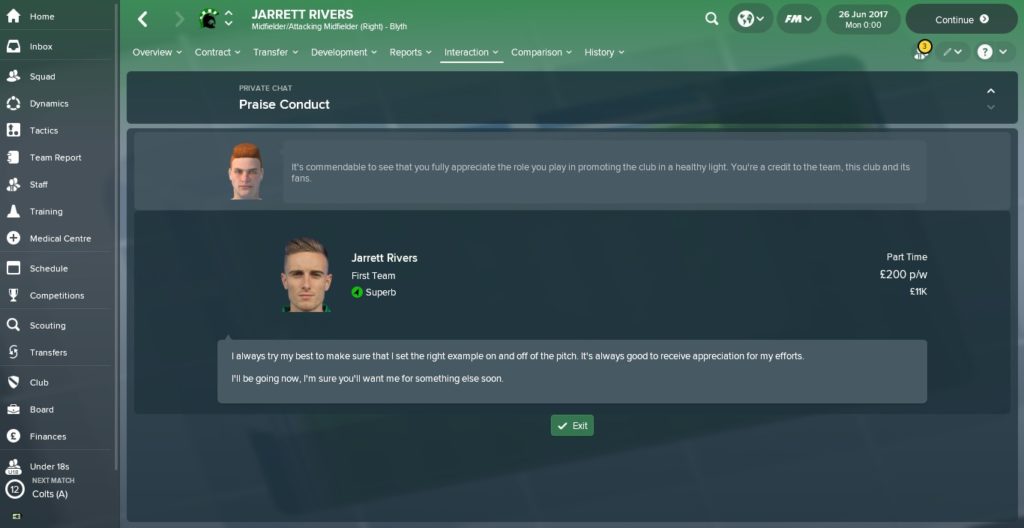 It really does work

“Another little trick is raising morale by right-clicking the player and praising their conduct. This always works; I’ve never had a player actually speak badly about this option.”

Praising or warning one of your players has always been tricky on Football Manager, but Jamie promises his method is 100% successful: “It’s a great way to keep the players happy.”

This is advice you can trust. Jamie’s Blyth Spartans were Premier League champions within eight seasons and, as he live-streamed it all on Twitch, there was no chance of tricking the system. The tactical side of things actually seems pretty straightforward – so what are you waiting for? Get that next save loaded up!

It's time to return to @Blyth_Spartans today! The save has been wound down but we'll return occasionally! We still haven't won the Champions League but we've done amazing right?

Join the stream and type !tactic to try the tactic we used. pic.twitter.com/TeBm0eui6b

You can follow Jamie’s progress live on Twitch by following the links on the @fmscout Twitter page.