Last year, we launched the inaugural Football Manager Cup, a free for all, knock out network battle royale that brought together some of the best FM players in the world and smashed their hopes and dreams all over the floor. But while few shed tears for the majority of our dozens of entrants, Joe Krishnan’s efforts won him some unexpected support…

After arriving at the Stadion Galgenwaard on a breezy Sunday afternoon, I’m escorted almost like a celebrity around the modernistic corridors of the FC Utrecht museum. My guide Jan tells me he’s been a fan of Utrecht “since this high”, gesturing with great enthusiasm and immediately apologises for his “poor English”, which is actually quite good. His demeanour reminds me of the dignified manner of Ronald Koeman but with a dash of the stereotypical Dutch passion that Louis van Gaal demonstrates so often. He cracks a smile as he delves into the Dutch club’s history, showing archives of Utrecht’s previous homes and some of their famous victories over the years.

You might be wondering what on earth I’m doing at a mid-table Eredivisie club that even some of the more dedicated football boffs might not have heard of. As I wander around looking keenly at memorabilia in front of a local TV cameraman, I reflect on the events that led me to forming a strong bond with this club. I had seen a tweet from The Set Pieces on Twitter, who with help from SI Games were running a network-based Football Manager tournament which saw players pit themselves against the very best. Entrants would be assigned a fairly low-key team at random – all of similar ability – in their quest to the crowned king. 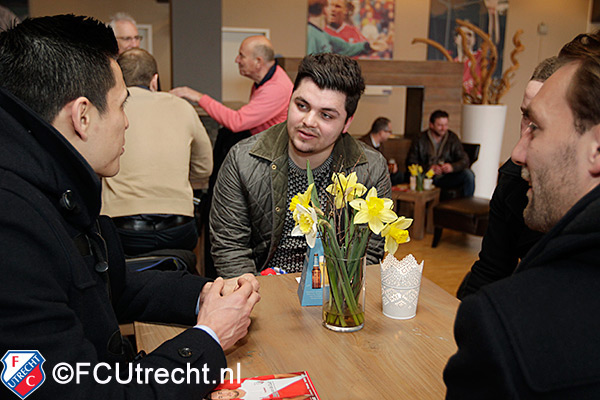 This sounded like my kind of thing, given that I’ve always played Football Manager with great commitment. It’s a game I have always admired, whether it’s during a rainy day, when you’ve lost a game in real life and need a chance to soften the blow or when you simply have an eight-hour journey to kill. I knew what I was capable of and I decided to give it a go, but who would I get? An underachieving Championship side, a high-flying Brazilian team or perhaps a sleeping giant needing to be awakened? As fate would have it, I was handed the reins of FC Utrecht.

Normally taking on the challenge of managing a lesser-known team would not be an issue, but with no signings allowed, I had to work with what I had at my disposal. My game was less than a week away and, fearing a hammering at the hands of some of the higher-ranked teams, I began to research some of the playing squad. A few familiar names cropped up: Tommy Oar is a player Ipswich Town fans will recall for his brief stint at Portman Road, while the more dedicated Arsenal supporters may remember the Dutch prodigy Nacer Barazite, now 25 and rebuilding his career after leaving the Emirates, with spells at Monaco and St. Truidense.

As it turned out, my initial jitters over the first round were premature. My Utrecht side were given a bye, before my second-round opponent, Helmond Sport, were forced to forfeit. An advantage on paper, but without match practice, I went into the clash against Ulsan Hyundai without really knowing much about how to set up. However, it didn’t require much tactical work as with the ever-impressive Edouard Duplan and talismanic frontman Ruud Boymans on song, I was swiftly into the final, scoring 15 goals in just four games.

During my journey to the final, I had been detailing my adventures on Twitter and it was only a matter of time before FC Utrecht caught on. They were arguably as excited as I was, offering me the incentive of two VIP tickets and some kit if I came back with some silverware. But much like Jose Mourinho, my preparations were “betrayed” by my 2D players.

The team standing in the way of glory, Dundee United, had proved resilient at the back and nicked an early goal to sit on. I wasn’t used to falling behind, so I ripped up the tactics sheet and went for an audacious 4-1-3-2 formation, setting the mentality to ‘Overload’ but the boys struggled to find a response. Despite several late surges in attack, the full-time whistle came. Feeling inconsolable, I virtually traipsed upstairs to the boardroom expecting the sack, only for the board – okay it was the club’s social media account – to give me the dreaded vote of confidence and the two tickets as promised. What a lovely club, eh?

Six months later, I had finally arrived for the real thing. It was game day at the Galgenwaard, where Utrecht were welcoming leaders PSV Eindhoven. It stunned me how much they had prepared for my visit, that something as trivial as Football Manager had meant this much, but then I realised it’s because they just love their football and their fans. There’s a real family feeling too, with no Middle Eastern billionaire firing managers left right and centre in sight – the owner Frans Van Seumeren is a lifelong fan of the club, and when you get to the lounge area, you see players past and present talking to supporters as if it’s nothing – a social event almost unheard of at a top-flight club in England.

Amongst the memorabilia in the museum – notably from a 4-2 victory over an Ajax side which contained the likes of Wesley Sneijder and Steven Pienaar – are pictures of players and coaches who have passed through the club. But further on in the tour, I see there are also the reminders of the tragic periods the club has had to endure. I notice my guide’s grin has disappeared as he poignantly directs me towards the respective tributes to Mihai Nesu and David di Tommaso. In May 2011, Nesu collided heavily with a team-mate in training, breaking his cervical vertebrae. Doctors feared it would be months before he could play again, but he never did. Nesu remains paralysed but five years on, the club remember him for his contribution. With di Tommaso, the club’s player of the year in 2004, the story takes a different path. The former Sedan defender had played against Ajax in a midweek fixture without any complications, yet just a few days later, he died of a cardiac arrest in his sleep at the age of just 26. Around 14,000 fans, colleagues and friends attended his memorial service and the club retired his number 29 shirt. It’s a painful memory but also one that contributes to the togetherness this club has.

As I’m shown around the hospitality boxes and the inside of the ground, I’m asked to do a quick interview with Donald, the cameraman for Utrecht’s local TV channel. I oblige, without any preparation and therefore spluttering the more than acceptable amount of “ers” and “I’m happy to be heres”, before being taken to meet the captain Willem Janssen and Rubio Rubin, one of the brightest talents in the USA national team setup. Both are injured but their spirit remains high, having witnessed their team-mates dismantle PSV 3-1 at the Philips Stadion in the KNVB Cup just three days earlier. We talk Football Manager, with Janssen keen to know where I played him. I watch his face drop as I tell him he was on the bench, before revealing the truth that he was the creative force as my No. 10. Rubin doesn’t say anything but gazes at me intently. Eventually I pluck up the courage to inform him that he wasn’t used much. He laughs, saying I would have won if I played him.

We discuss the Premier League and unsurprisingly, both harbour an interest. “I once came close to a move with Hull City,” Janssen says. “They had just got promoted and I was set to go there but it didn’t happen.” Feeling more like an interview rather than an informal chat, I ask him if he thinks it’s too late to go there now to which he replies: “I think so. I’m nearly 30 but you never know.”

Our attention turns to the game against PSV. Normally the odds would be stacked against Utrecht, who at the time of writing were 7th in the Eredivisie while PSV led Ajax at the summit by a point. But the cup tie in the week had evidently given Utrecht belief. With young players like Yassin Ayoub and Sebastian Haller catching the eye of several European clubs, victory was not out of the question. However, Janssen is experienced enough to know that revenge is the sweetest feeling in football and Philip Cocu’s side would be out to get it, admitting a repeat 3-1 win would be extremely tough.

As I made my way to my seat, perched somewhere near the halfway line, the atmosphere for the game was slowly building inside the 24,800-seater arena. The PSV supporters had been in the ground for two hours, with around 1,200 of them even fired up when the team was going through their pre-match warm-up. Flares going off, synchronised jumping and singing so loud it could have punctured a few lungs – it was pure madness. But what else would we expect from the Dutch?

The teams were out. Unsurprisingly, coach Erik ten Hag hadn’t picked up on my memo to ditch the two up top for a lone striker. He went with the towering Boymans and the mercurial figure Haller as his strike partnership. Within five minutes of my first experience of Dutch football, I learned that the tempo was naturally slow and this made for a tepid opening. That is, of course, until PSV burst into life.

The Utrecht back four were opened up with consummate ease, with Timo Leschert leaving the gate open for Santiago Arias to go through on goal. The Mexican full-back took his time and placed his effort under goalkeeper Robbin Ruiter, who could only watch as the ball trickled off his trailing leg into the net. It wasn’t the start Utrecht had in mind, but the worst was still to come. A defensive mix-up saw the ball fall to Van Ginkel, who scuffed his effort somewhat but it still had enough pace to beat Ruiter. Suddenly, Utrecht were 2-0 down inside 25 minutes and with Jurgen Locadia threatening, I feared it could get embarrassing.

Eventually, ten Hag’s side settled, with a few half-chances coming from Haller and Barazite. PSV looked vulnerable from set pieces and in the aerial duels, and with the tall strikers up front it was hardly a surprise. The best chance for Utrecht came in the last quarter of the game. Bart Ramselaar delivered the corner and Glenn Leeuwin headed onto the crossbar to the despair of the home support. After that golden chance, the game fizzled out and the referee called time as PSV extended their winning run to six games. For Utrecht, there was at least the game against Cambuur to look forward to where they could make amends.

I made my way out of the stadium, taking one last glance at the Galgenwaard before hopping into a taxi, knowing that I’d be back at some point in the future. All I could think about was the decision to enter an online game on Football Manager that had led me to being here. I had formed an affection for this club in real life from a manager simulation game, which seemed a bit far-fetched in all honesty. But the absurdity was part of what made it a special experience, and if that doesn’t inspire anyone to play the game, I don’t know what will.

And you can find all the details you need to play Football Manager here.