Gary Lineker and Toni Duggan. The only two English footballers to play for Barcelona in the club’s 118 years.

Barça came to close to signing David Beckham in 2003 before landing Ronaldinho instead (not a bad trade-off) and have had eight English managers throughout history including Terry ‘El Tel’ Venables and the late, great Sir Bobby Robson, but Barcelona’s connection to England is not a strong one.

Perhaps this shouldn’t be too surprising. After all, very few top-level English players leave the comfort zone of the Premier League to move abroad. You could even argue that that is amongst a litany of reasons as to why the Three Lions struggle on the big stage.

Taking this into consideration, we decided to have a crack at Anglicising Barcelona on Football Manager 2018 to see whether or not the influence of Lionel Messi et al would rub off on the English boys and make them more competitive on the international stage (as well as to see if it would have detrimental impact in Catalunya).

There were just two, very simple rules that I had to abide by:

So without further ado, here’s part one of the series.

Between us, the board and I agreed on a transfer budget of £71m which would normally be ample to mould a squad in the first season. However, a factor I had to contend with was the dreaded ‘English player premium’ whereby players cost exorbitantly more than their actual worth on account of their nationality alone.

After analysing my squad, I made signing an attacking midfielder my priority (this is a Coutinho-lite squad remember) which led me to Tottenham’s jewel, Dele Alli. It was an ambitious move. Not only did I have to contend with his inflated fee, but I also had to negotiate with the most difficult chairman in football, a certain Daniel Levy to get my N0.1 target.

My aim was made more difficult after my chief scout Robert notified me (somewhat unhelpfully) that Alli would cost between £92m-168m. Quite the difference in valuations there.

To have any hope of signing Alli, I needed to offload some players. Thomas Vermaelen moved to Hebei China Fortune and Arda Turan was reunited with Neymar at PSG. I raised £12m from their sales and freed up £300k in the wage budget. It wasn’t enough, though and with no-one willing to take a punt on Andre Gomes, I was forced into selling a mainstay of my side attracting interest from elsewhere with Jordi Alba moving to Chelsea for £41.5m.

Losing Alba was an unpopular move but it had to be done to get enough money in the bank to go after Alli and after some predictably tough negotiating, I had a bid accepted. It was one hell of a deal. Spurs received £104m big ones up front, plus £7m after 50 league appearances, £7m after 20 England apps, £5m for a La Liga title win and a further £10m for Champions League glory, potentially totalling a cool £133m.

Despite becoming one of the world’s most expensive footballers, Alli’s wage demands were actually pretty reasonable; I offered him a basic salary of £135,000 per week – lower than nine players in the squad – to be topped up by £20,000 per appearance and £13,000 for every goal. His minimum fee release clause – a mandatory clause in all contracts in Spain – was set at £364m. Hopefully, PSG don’t come knocking… 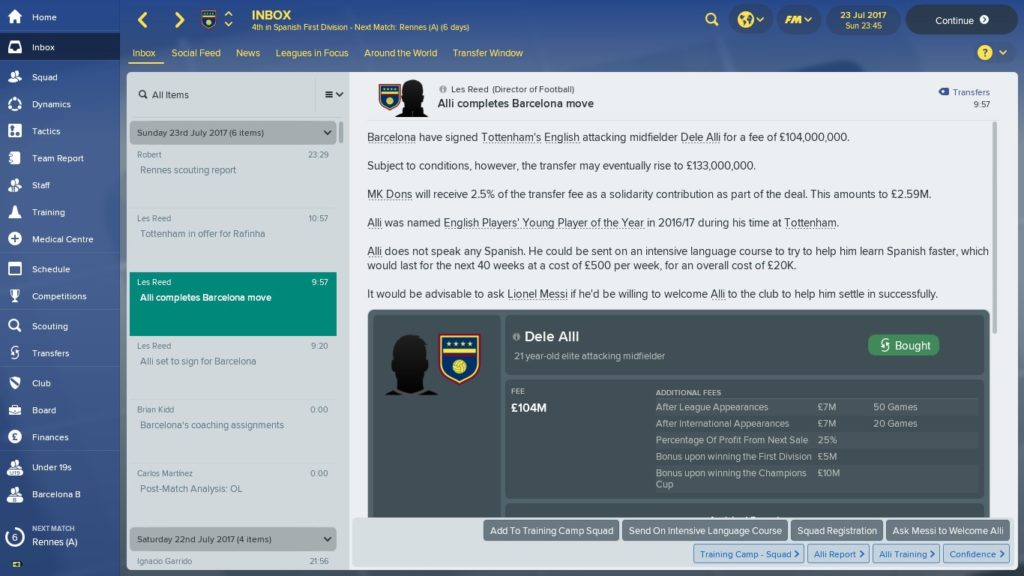 Well, dealing with Levy was actually pretty painless on this occasion. It took just three days for the transfer to be completed, meaning Alli had some settling in time ahead of the new season. There was even better news on the transfer front as Spurs, suddenly flush with cash, spent £40m on Rafinha, which immediately swelled the transfer coffers back to an acceptable level.

My number one target to replace Alba was one of Alli’s former teammates Danny Rose, but he was sidelined for two-three months with a knee injury. Rather than go after alternatives such as Luke Shaw or Ryan Bertrand, I settled on Rose being my No.1 target for January, promoted Lucas Digne to first-choice left back and decided to make a short-term fix instead.

Enter Ashley Young. Young was on the transfer list for £3.5m and his versatility meant that signing him as a squad player was a no-brainer. I also bought Ben Gibson. I didn’t really want to buy Ben Gibson but Vermaelen’s departure coupled with Javier Mascherano suffering a debilitating hip injury left me with little choice given my remaining budget. 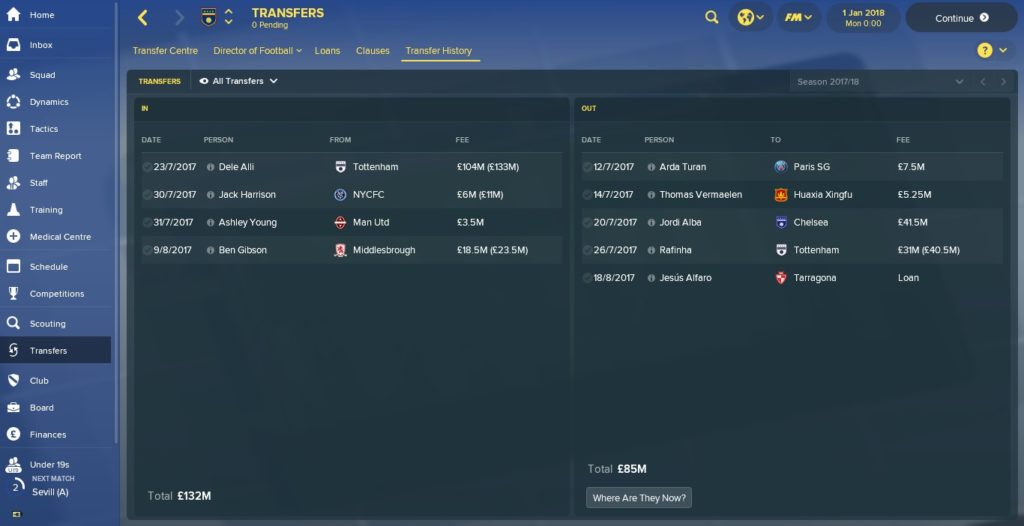 Not since 2001 and the days of Fabio Rochemback, Geovanni and Javier Saviola had Barcelona had as uninspiring a transfer window as this one…

Rounding off my summer signings was Jack Harrison who arrived in the most hipster deal of the summer from New York City FC for an initial fee of £6m. As Harrison is one for the future rather than a ready-made first-team player, I transferred him straight to my B team to see how he’d develop.

On the eve of the season (starting with a doubleheader against Real Madrid, no less) I was dealt an extremely bad hand on the injury front. The FM gods were not with me from the very start, sadly.

I was without six first-teamers for the Supercopa matches, including the holy trinity of Lionel Messi, Andres Iniesta and Luis Suarez. We drew 2-2 in the first leg before getting absolutely spanked 6-1 at the Bernabeu. In the words of Alan Hansen, our defending was utterly diabolical. My reign was off to the worst start imaginable… 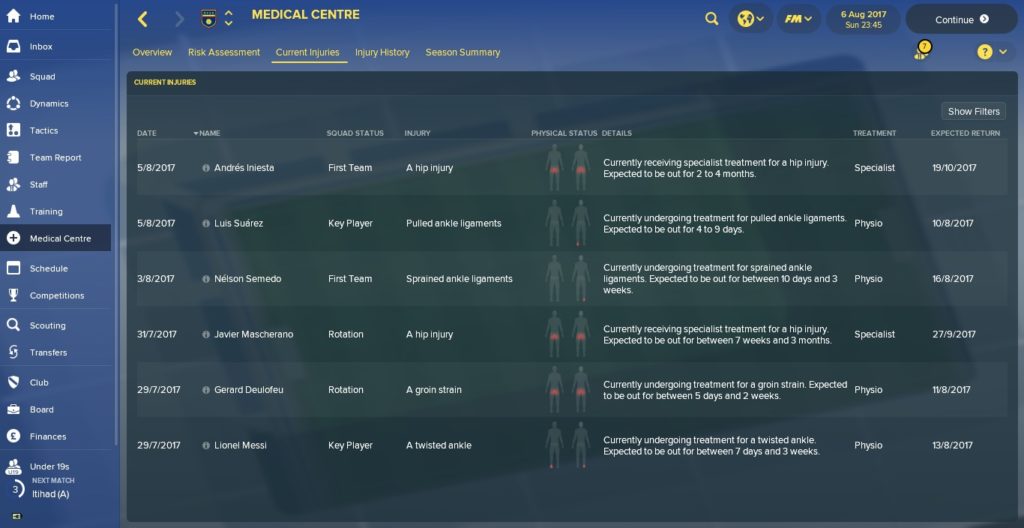 This is what I’m confronted with ahead of the El Clasico doubled header in August. Cheers lads @FootballManager

The capitulation at the hands of Real Madrid was bad. Embarrassingly so. However, I decided it would be counter-productive to destroy the team in the dressing room afterwards (including Gibson who debuted) and a 3-1 win over Valencia on the opening day of the league season proved that decision to be correct. Even better for me, Dele Alli made an immediate impact, scoring twice and walking away with the match ball after lining up in the shadow striker role, just off the fit-again Suarez in attack.

In the opening two months of the season, the team’s form veered wildly from very good to very bad with no real indications as to what kind of performance would be delivered from one game to the next. We followed up a three-game unbeaten run in the league with a dismal 3-0 defeat to Nice in the Champions League, for instance, before winning five of our next six games in all competitions without conceding a goal, except for one anomaly – a 4-0 hammering at the hands of Celta Vigo.

Back-to-back defeats by Chelsea in the Champions League and Atletico Madrid in the league in October, left us with a mountain to climb to qualify for the knockout stages in Europe and off the pace domestically. However, a morale-boosting six-game winning streak got things back on track before another shock 2-1 defeat to Las Palmas brought everyone back down to earth again. 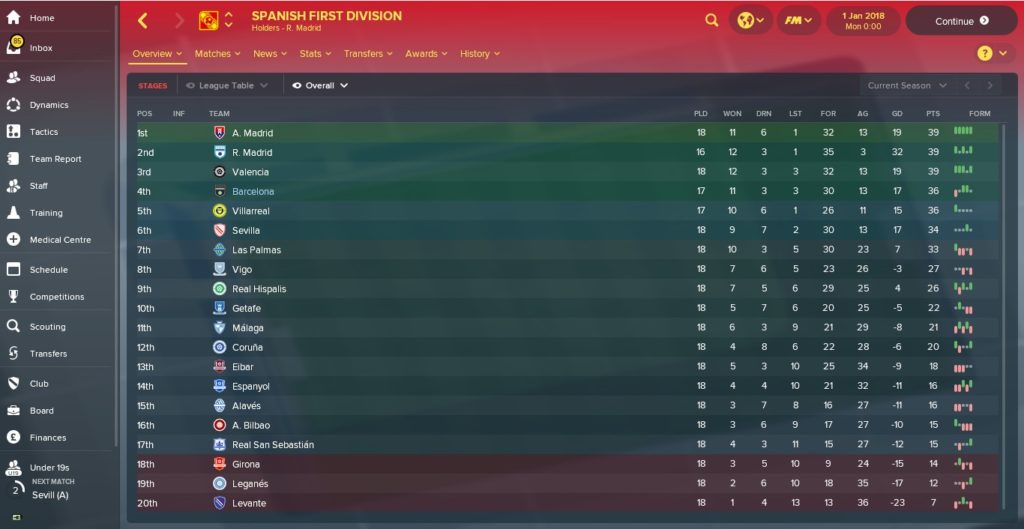 The La Liga table midway through the season.

By the midway point in the season, things were going no better than ok. We progressed through a tricky Champions League group in 2nd place, were safely into the 4th round of the Spanish Cup and sat just three points off the leaders Atletico Madrid in the league table, albeit three places below them with Real Madrid and Valencia sandwiched in between.

January was shaping up to be a pivotal month in the season with a tricky two-legged Spanish Cup tie against Sevilla to negotiate as well as five league matches, including the first Clasico since that harrowing 6-1 defeat in August. We have a score to settle…