Everybody has (or at least likes to think they have) a set formula for gaining results on Football Manager.

The parameters may be adjusted from time to time – managing Real Madrid is slightly different to taking charge of Real Salt Lake, for example – but generally speaking, you will approach the game in a similar way every time you start a new save.

But which type of manager are you? An ‘Arry Redknapp wheeler dealer or a Pep-inspired tactician? Let us help you decide… 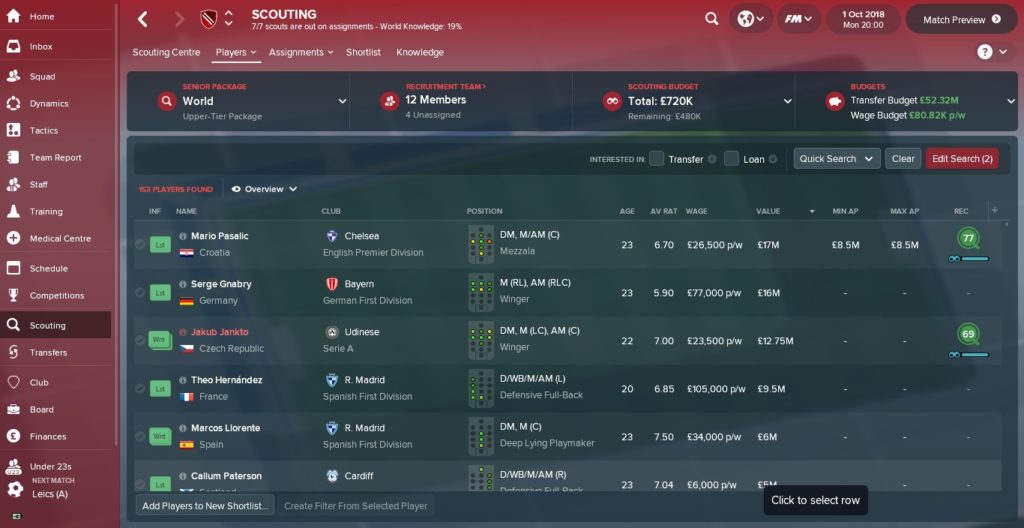 The running joke that Harry Redknapp will always sign Niko Kranjcar may be a bit tired, but the Croatian playmaker has linked up with his favourite boss on three separate occasions at Portsmouth, Spurs and QPR.

And Kranjcar isn’t the only the player who regularly comes under Redknapp’s radar. In fact, virtually all you have to do to catch Redknapp’s eye is be reasonably talented, experienced and, often most crucially, cheap as chips.

It’s Redknapp’s penchant for signing ageing free transfers, or out-of-favour players who have fallen by the wayside, that has earned him the tag as English football’s biggest ‘wheeler dealer’.

“I ain’t no fackin’ wheeler dealer, I’m a football manager,” he famously retorted to a Sky Sports reporter who had the temerity to ask him why his wheelin’ and his dealin’ had dried up at Spurs.

That may have been to save face, but Redknapp most certainly is a wheeler dealer. It’s the same way many of us like to operate on FM, with a transfer strategy revolving around Bosman signings and bargains.

It might not be the flashiest way to conduct your business, but get it right and it can be hugely effective. 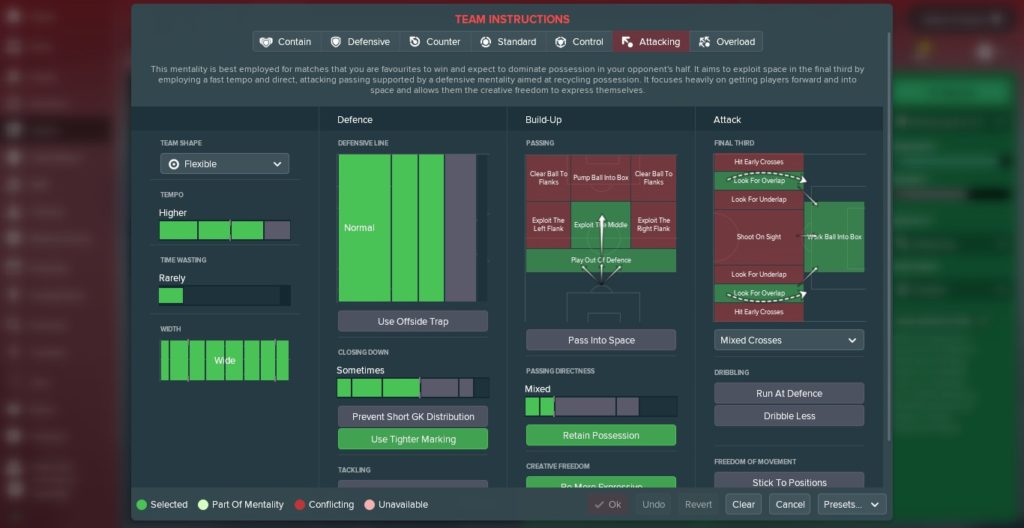 We’ve all seen the video of Pep Guardiola remonstrating with Raheem Sterling on the training pitch, animatedly pointing out where he should be positioned. Suffice to say it seems to have worked this season.

On FM18, the computerised version of Pep (avatar baldness optional), is similarly obsessive, changing tactics and personnel on a game-by-game basis to counteract the strengths of your opponents, even if they have none.

Configuring your midfield is a never-ending chore. Which of the three playmaker roles; deep-lying, roaming and advanced, will suit your main man in midfield? Should you try out one of the new roles, Mezzala or Carrilero? What about the formation? Do you stick rigidly to a classic 4-4-2 or chop and change it?

Given how much work you put into everything pre-match, you are the kind of Football Manager who watches a game from start to finish in order to spot where your tactical system might be working or failing.

For you, Football Manager is a game of strategy. It’s about taking on the ever-improving AI opposition and beating them, time and again, by using innovative tactics and unique player role configurations. 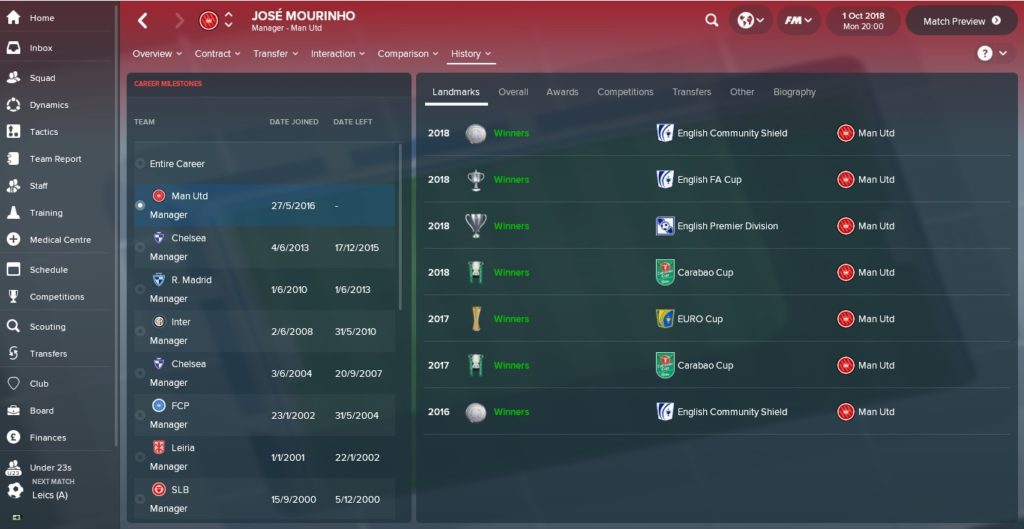 We’ve all heard the stories of the guys who have played Football Manager up until the 2058-59 season but for some of us, that’s far too long to commit to a save.

Some managers are on a quest to make those short-term gains by winning trophies as quickly as possible before they get bored and move on elsewhere.

Typically, these guys will spend two to three years maximum at one club, doing their utmost to claim silverware and boost their in-game reputation, before joining another club and attempting to do the same all over again.

If this is you, you might feel that building a dynasty is for idealistic chumps. The game is about glory, after all.

You are the short-termist and Jose Mourinho is your managerial idol.

Football management is an all-encompassing job even in the modern game where the man in the dugout is helped out by an army of coaches, scouts, data analysts, sporting directors and so on and so forth.

However, delegating tasks elsewhere is not what The Neurotic is about. You are the top dog, the buck stops with you and, as a result, you will oversee everything to the tiniest detail.

You’ll spend hours on end creating bespoke training routines tailored to the individual needs of your playing squad to fine-tune their skills and extract every last ounce of their potential ability.

Your data analysts will become your best friends and the Director of Football role is rendered meaningless as you send your scouts on ridiculously specific scouting assignments all over the world.

You won’t leave any stone unturned in your quest for glory. But it might take you an actual week to complete a single match.

There are two ways you can fall into this category.

Firstly, you can attempt to follow in the footsteps of the ‘Class of 92’ or Ajax ’95 and develop players from within, moulding them into first-team stars.

Or secondly, you can adhere a self-imposed strict transfer policy whereby you only sign young players, 23 and under, and do a similar thing. (It’s confession time – this is currently my strategy at Southampton). 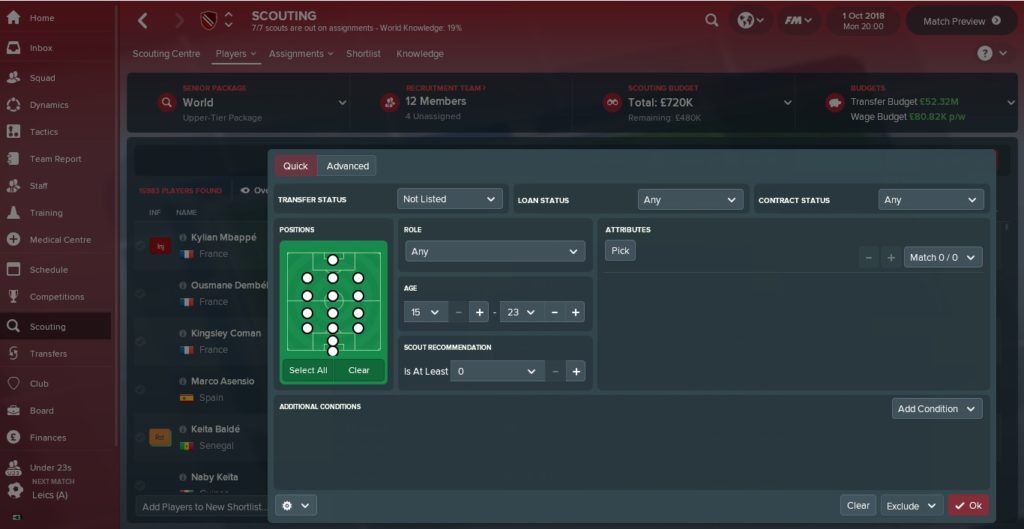 You might even do both in an attempt to regenerate an ageing or underperforming first-team squad and inject it with hungry young players desperate to make an impression.

Training is crucial here as you need to have top coaches to extract the maximum potential out of your academy prospects, while scouting players who fit your profile is also imperative.

After you’ve settled into the job, you can start planning for the long-term. You might ask for a board meeting in order to increase your junior coaching budget and improve the youth facilities, or request a change in your philosophies.

It might take a while to unearth the next Harry Kane, but when it does happen there are few more satisfying achievements in Football Manager. 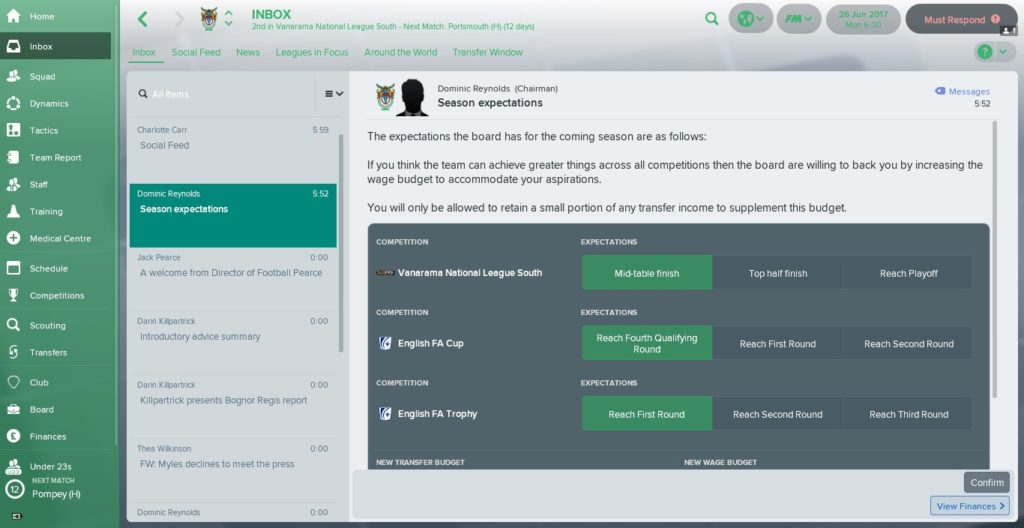 Mid-table in the Vanarama Conference South? No thanks mate, we’ll be winning the Champions League in ten years’ time.

Sure, you could swan straight into a top job somewhere like Manchester City, Barcelona or Bayern Munich and win everything in sight, but where’s the fun in that?

Perhaps more importantly, where is the challenge in that? The Dreamers out there would rather create their own piece of history. Rather than take on a relatively straightforward mission, they want an impossible one.

Winning a 13th Champions League title with Real Madrid is one thing, but everyone will know your name if you lead Bognor Regis from the sixth-tier of English football to the pinnacle of the European game.

A challenge such as this is not for the faint of hearted. You’ll have to make sacrifices in order to achieve your ambitions. Girlfriend’s birthday party? Sorry, I’ve got work to do. Office Christmas party? No thanks, there’s a League Two play-off semi-final to prepare for.

But once you reach the promised land, whatever that might be, all of the time and effort will be well worth it. You are the Bognor Regis manager and your team has just beaten Real Madrid 5-0 in the 2035 Champions League final. Have a pint, you’ve earned it.