The transfer market well and truly went bonkers this summer with footballers moving for incredible sums all around Europe. However, while the average price of players has sky-rocketed in recent times, there are still bargains to be had – if you know where to look for them.

With the European season already a few months in, there are still some very handy free agents knocking about and we have picked five of the best you should look to sign on Football Manager 2018. Happy shopping! 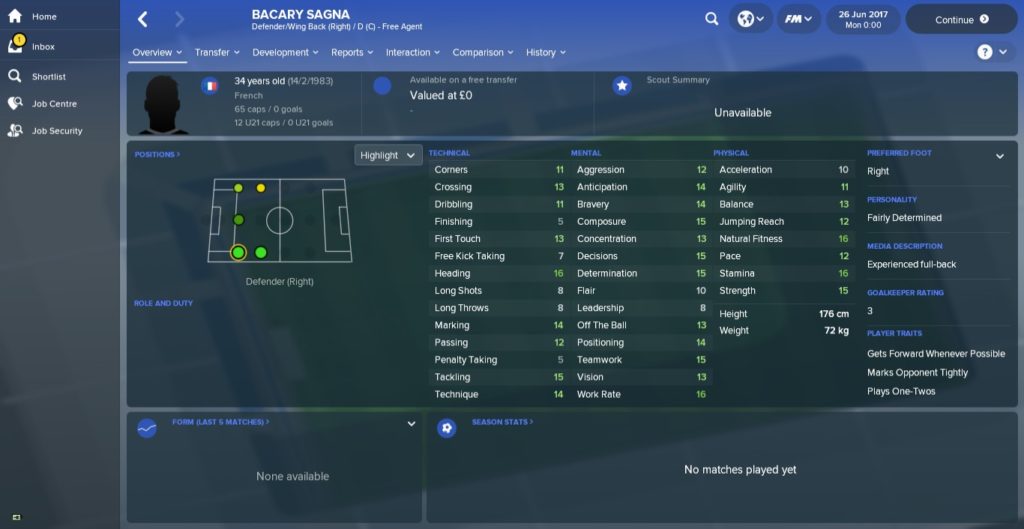 A Premier League veteran with a decade of service and 266 appearances for Arsenal and Manchester City, Bacary Sagna found himself a victim of Pep Guardiola’s re-building plans over the summer when he was released.

Guardiola clearly didn’t fancy the full-backs he inherited as Pablo Zabaleta, Aleksandar Kolarov and Gael Clichy were all quietly ushered out of the exit door at the Etihad. While those three all quickly found new clubs, Sagna is yet to be snapped up which is something of a mystery considering his experience and quality.

Sure, if you’re looking to build a long-term project, a 34-year-old injury prone right-back probably isn’t what you need, but if you’re after a steady Eddie who can do a job in the short-term and pass on his wisdom to one of your young whippersnappers in the academy, Sagna is your man. Sign him up before Rafa Benitez whispers sweet nothings into his ear about joining Newcastle.

Perfect for: A mid to lower half Premier League club lacking a) a specialist full-back, b) experience, c) any money whatsoever, d) all three. 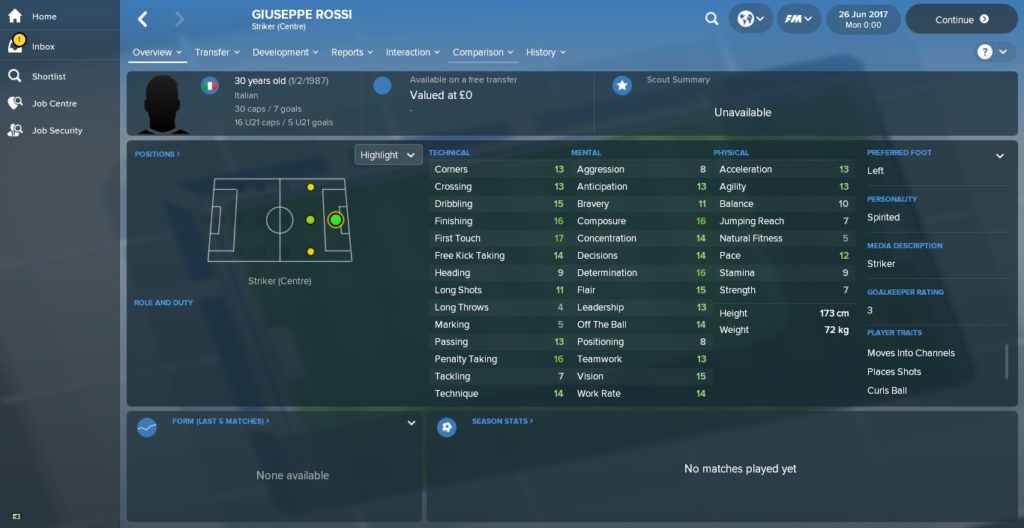 Has there been a more unlucky footballer over the past five or six years than Giuseppe Rossi? The American-born Italian forward has suffered not one, not two but five cruciate ligament injuries in that time. Poor bloke.

You won’t be shocked to hear that Rossi starts off injured in FM18, meaning you’ll have to wait a few months to sign him up. But if you find yourself lacking an out-and-out goalscorer midway through the first campaign, you’d do worse than to give Rossi a chance.

Given his susceptibility to suffering knee injuries, Rossi is unlikely to be a player that you build your team around, but he could be a great impact option off the bench. His stats are impressive and if you tailor a training routine to lessen his workload, Pepito could be an extremely savvy addition.

Perfect for: A mid-table Premier League side in need of a predatory poacher off the bench. We can see him taking Bojan’s role at Stoke, for some reason. 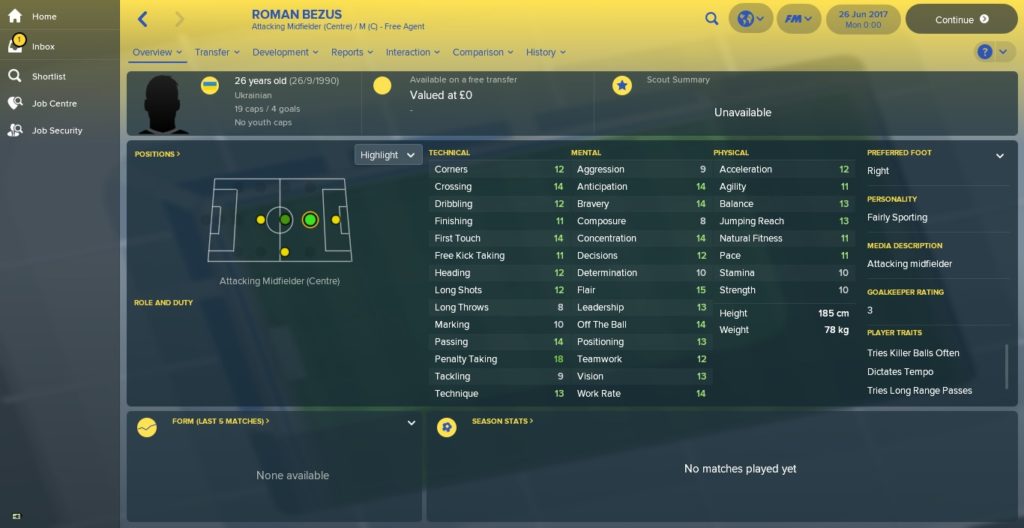 Once tipped as a future pillar of the Ukrainian national team, Roman Bezus’ career has stalled in recent years after a big move to Dynamo Kiev failed to pay off.

Bezus spent last season with Sint-Truidense in Belgium and, after scoring just once in 20 league games, he was allowed to leave the club in the summer.

At 26, Bezus should be approaching his peak years and, on the whole, his stats look pretty solid across the board. If you need a playmaker who can turn the magic on every once in a while, you could do worse to take a punt on this penalty king.

Perfect for: A top half Championship club. In a tight division, he could make the difference in the final third and he has the capabilities of stepping up a level too. 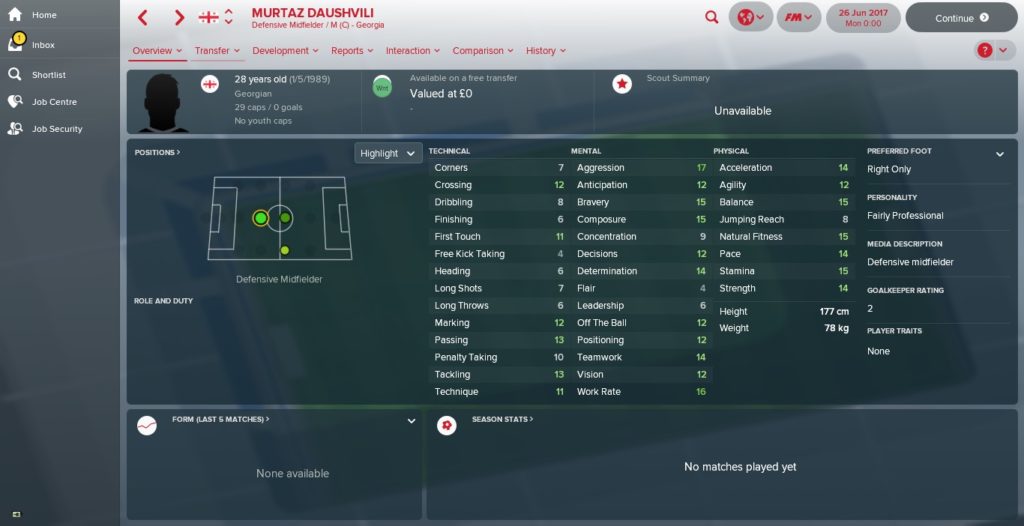 Ok, signing a 28-year-old defensive midfielder on a free transfer won’t exactly get your supporters flocking to the stadium in their droves, but Murtaz Daushvili could become a fans’ favourite very quickly.

While not the most technically gifted player you’re ever likely to come across, Daushvili makes up for his lack of talent with industry, work-rate and determination.

Plonk him in a defensive midfield role in front of your back four and you can rest assured that he will provide ample protection. He’s a good old-fashioned water carrier.

A few Chinese Super League clubs are usually sniffing around him at the start of the game so be prepared to face a wage offering war.

Perfect for: He screams Sunderland. Alternatively, practically any other Championship club. 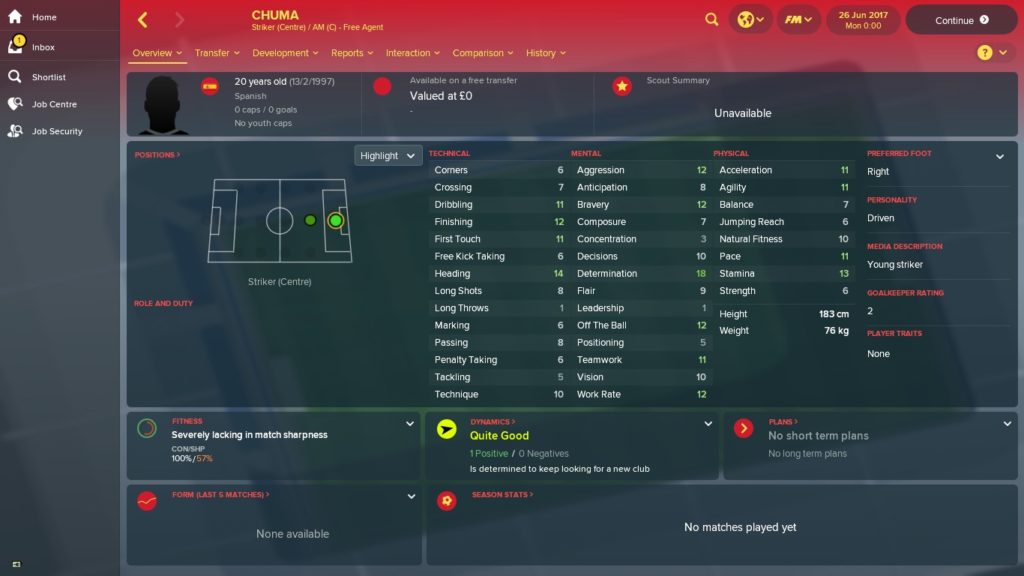 Generally speaking, free agents tend to be players coming towards the end of their careers. It’s a young man’s game, after all, and clubs would rather snap up someone with potential to improve.

In the case of Chuma, though, the opposite is true. At 20 years old, the Spanish striker has his best years ahead of him. Although he failed to make the grade at Sevilla and was released from his contract at the end of last season, Chuma could flourish elsewhere if given sufficient playing time.

At the start of the game, his stats don’t look up to much, but just look at how determined he is! If you give him the chance to show what he can do, his attributes should shoot up in no time. His name is perfect for Martin Tyler style commentary too, just picture him yelping “CHUMAAAAA” when he scores an injury-time goal to seal promotion.

Perfect for: Any team in the Championship. He’s got potential but needs some work before stepping up to the big leagues.