In case you missed the first part of our Barcelona series and are now wondering what on earth is going on, here is a little refresher on what exactly went down.

We set out to show that English footballers can prosper abroad by implementing a strict rule upon Barcelona whereby they can only sign players eligible to play for the Three Lions.

Dele Alli was the headline purchase, joining for a club-record £133m fee while Ashley Young, Ben Gibson were somewhat less heralded arrivals. Jack Harrison also linked up with the B Team after signing from NYCFC.

At the midway point of the 2017-18 season, we had suffered a disheartening 6-1 defeat to Real Madrid but bounced back to qualify for the knockout stages of the Champions League.

So, that’s where we were at by December 31st. Here is what happened in the second half of the season.

Out in the real world, Barcelona have bought both Philippe Coutinho and Yerry Mina this January but largely due to Dele Alli’s budget-busting signing in the summer, we didn’t really have the money to improve the squad. A second raid on Tottenham for Harry Kane might have to wait… 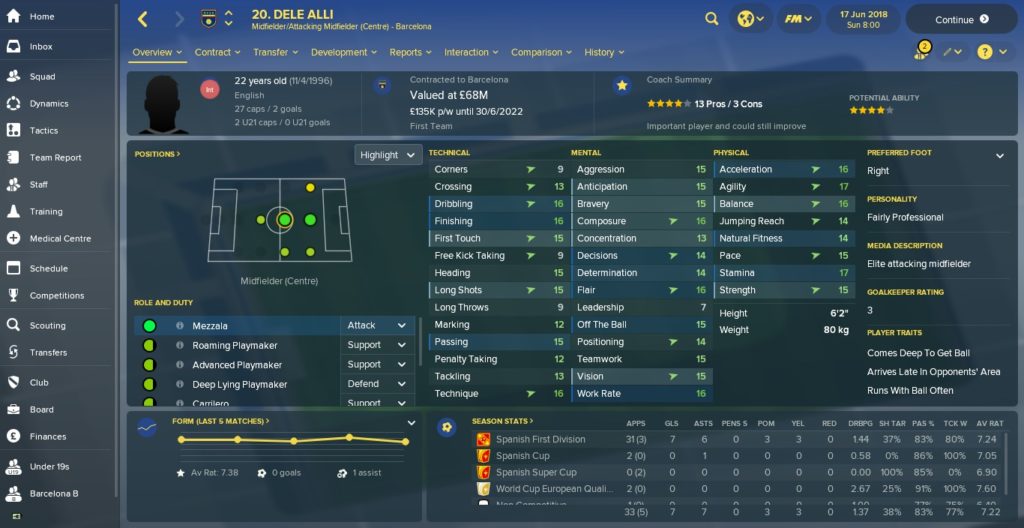 The New Year got off to the worst possible start. On January 3rd, we were on the receiving end of a 4-1 spanking by Sevilla in the first leg of the Copa Del Rey 5th round, all but sealing our exit from the competition barring a minor miracle. Both Gibson and Young started that game, not that we are pointing fingers.

Thankfully, the team picked up after that winning seven of the next eight games in all competitions, including a 4-0 hammering of Celtic in the Champions League knockout stages. That game did not come without cost, though, as Alli suffered a groin strain which ruled him out of action for three weeks.

What happened next was interesting. Shorn of the services of Alli in a roaming playmaker role, we hit a real slump in form, failing to win any of our five matches without him. Upon his return for a LaLiga fixture against Levante, things immediately improved with the team getting back on track courtesy of a 2-0 win. 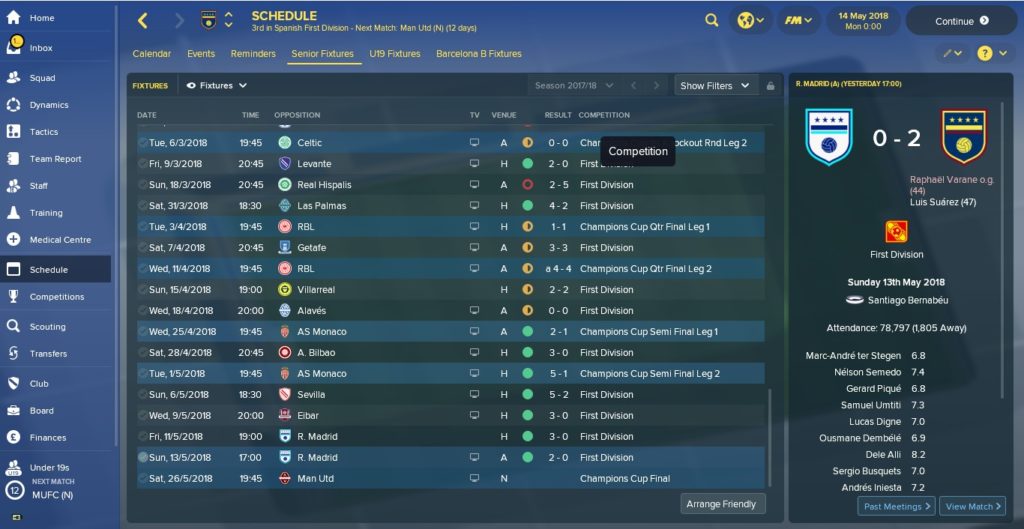 We avenged our damaging 6-1 defeat to Real Madrid by beating them by an aggregate score of 5-0 in La Liga.

In truth, our early season form had compromised our league ambitions making it extremely difficult to mount much of a challenge. The bigwigs over at LaLiga HQ weren’t making our job much easier mind, inexplicably arranging for the two Clasico meetings to take place back-to-back in the final two round of fixtures and with only two days between them. Despite that incredibly poor planning, we exorcised the demons of that nightmarish 6-1 Super Cup defeat by winning both games at an aggregate score of 5-0, thus ending the domestic season on a high.

Interestingly, Real Madrid also encountered similar problems with consistency, frequently shooting themselves in the foot by losing to clubs in the lower reaches of the division. Our struggles combined left the path clear for Atletico Madrid to romp to their second title in four years, finishing eight points clear of Real and nine ahead of us.

Nevertheless, it wasn’t all doom and gloom in La Liga. Luis Suarez’s heroic efforts in attack – 32 goals and nine assists in 36 games as well as an average rating of 7.51 – led to him being named the Player of the Year, while Dele Alli joined him in the Team of the Year after enjoying an exceptional debut season. (Which was handy considering the whole point of this). 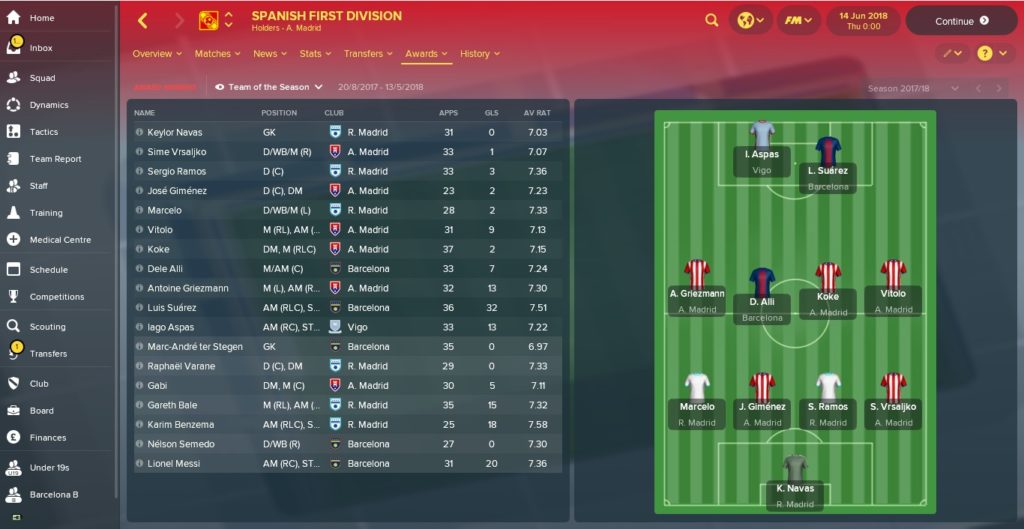 Dele Alli made it into the LaLiga Team of the Year.

Anyway, the final win over Real Madrid wasn’t our final fixture of the campaign. In fact, we had far bigger fish to fry…

Just like in LaLiga, our Champions League campaign got off to an inauspicious start as defeats to Nice and Chelsea in the opening three fixtures left our qualification hopes hanging by a thread. Fortunately, we were able to bounce back and finish 2nd in the group to progress to the knockouts.

Lady luck shone on us as, despite coming runners-up to Chelsea, we were handed a relatively straightforward draw against Celtic in the last-16. Over two legs, we pulverised Brendan Rodgers’s side 4-0 on aggregate, with Suarez coming back to haunt his old boss with a brace at Camp Nou.

Next up was the season’s surprise package, RB Leipzig in what also appeared to be an eminently winnable tie. We squeezed through on away goals following a frankly ridiculous two-legged contest that ended all square at five goals apiece.

We had been staring down the barrel too. Goals from Emil Forsberg and Yusuf Poulsen (2) had put Leipzig 3-0 to the good inside the opening half an hour and although Lionel Messi pulled one back after half-time, Naby Keita restored their three-goal lead shortly after the interval. Suarez brought it back to 4-2 before Messi converted again with 20 minutes remaining. 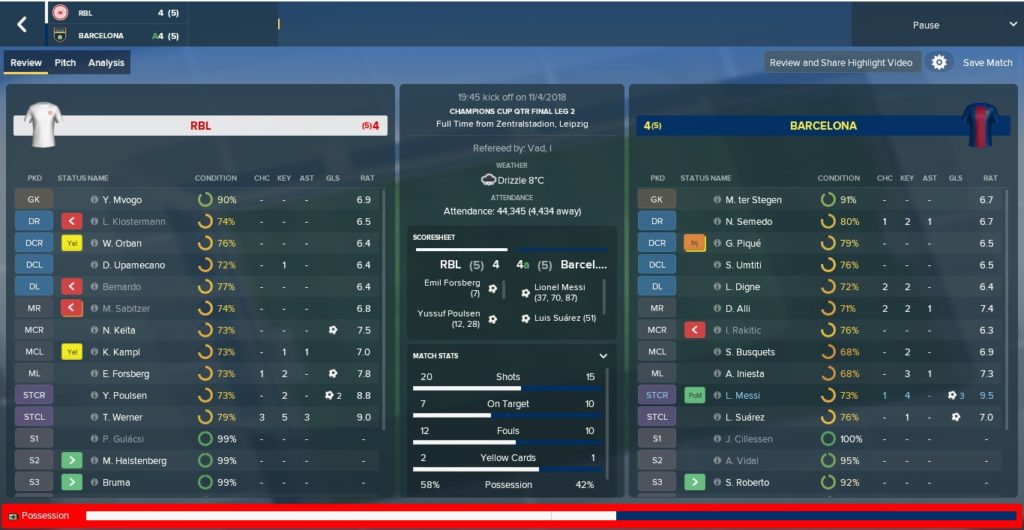 Our PSG-esque comeback was completed three minutes before time when Alli released a sumptuous through ball to Messi to seal his hat-trick. That was exhausting.

After that epic contest, it felt as if winning the competition was our destiny. A semi-final tie against Monaco, devoid of their stars from last season, was another favourable draw. We absolutely destroyed them over the two games, winning 7-2 on aggregate with Suarez helping himself to six of the goals and Messi the other.

The final beckoned and fate had thrown up a fixture against an old foe in Jose Mourinho and his Manchester United side. United had enjoyed a pretty decent season, finishing 2nd in the Premier League and adding Mesut Ozil and Dries Mertens to an already fearsome attacking line-up.

However, we came into the game in great form having gone unbeaten in 13 games in all competitions and winning seven in a row including both Champions League semi-finals and the double header against Real Madrid. 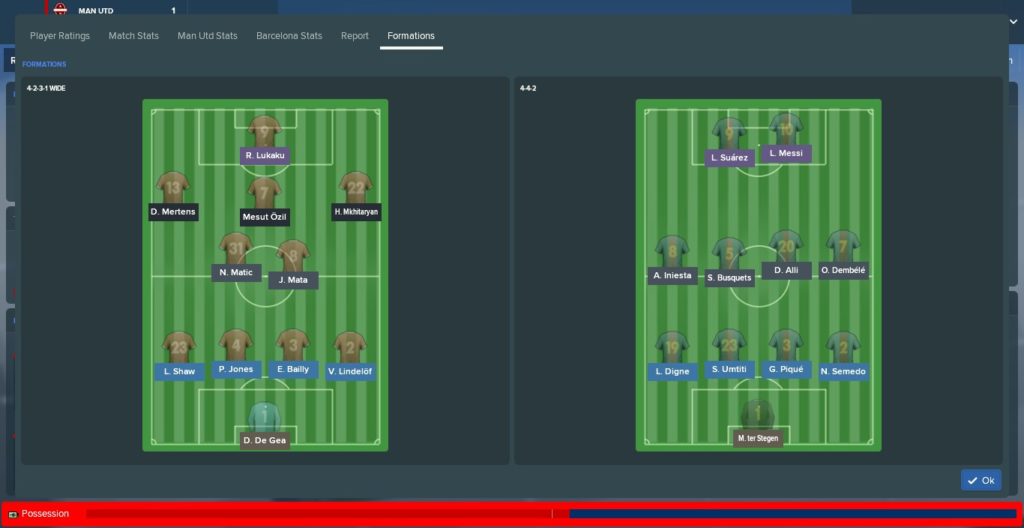 How both teams lined up in the Champions League final.

For the final, I selected one of my English stars for the starting line-up with Dele Alli lining up alongside Sergio Busquets in central midfield andOusmane Dembele on the right and Andres Iniesta on the left in a 4-4-2 formation. Ashley Young and Ben Gibson had been commendable squad players throughout and warranted inclusion on the bench.

The match itself – the third Champions League final between the two clubs in nine years – was a cagey one with neither side managing to gain supremacy. With 32 minutes on the clock, Messi struck the opener. Alli was involved in the move, sweeping a lovely ball out to Dembele on the right and his cross was turned in by Messi at the near post.

United predictably upped the ante after that setback and managed to equalise just before the hour mark as the former Real Madrid man Ozil predictably found the net following good play by Mertens on the right. The game reverted back to a nerve-shredding back and forth contest before disaster struck on 84 minutes… Dele Alli was sent off for a second bookable offence.

Off came Dembele, on came Sergi Roberto and an unorthodox 4-3-2 formation was implemented. Incredibly, just two minutes later, we had the lead as that man Suarez again bailed us (and in particular our tempestuous No.20) out by scoring the winner from close range after some typically mesmeric work by Messi on the right wing.

United huffed and puffed but could not blow our defensive door down. Champions League glory was ours. Ben Gibson had a Champions League winners medal around his neck a year after being relegated to the Championship with Middlesbrough. We had done it.

Any season that ends with a Champions League trophy has to be considered a success, especially given the disastrous start we had made. Victory had also given me a stay of execution and provided a boost to the coffers for the following season.

As far as the English players’ performances were, it would be fair to say it was a mixed bag. Dele Alli was brought in to become a mainstay of the side and he did just that, establishing himself as a key member of the side and making himself undroppable when fit, featuring in 48 games overall and averaging a 7.22 rating.

Ashley Young was signed as a stop-gap due to a lack of funds to buy Danny Rose and featured sparingly while Ben Gibson stepped in and performed well when called upon. He will get more minutes next year. As for Jack Harrison, he enjoyed a solid debut season with the B team and will be integrated into the first-team setup.

In terms of the future, Spurs trio Harry Kane, Eric Dier and Danny Rose are all top targets while Phil Foden would settle in quite nicely into the B team. We do already have one signing secured, though, and it certainly is an interesting one… 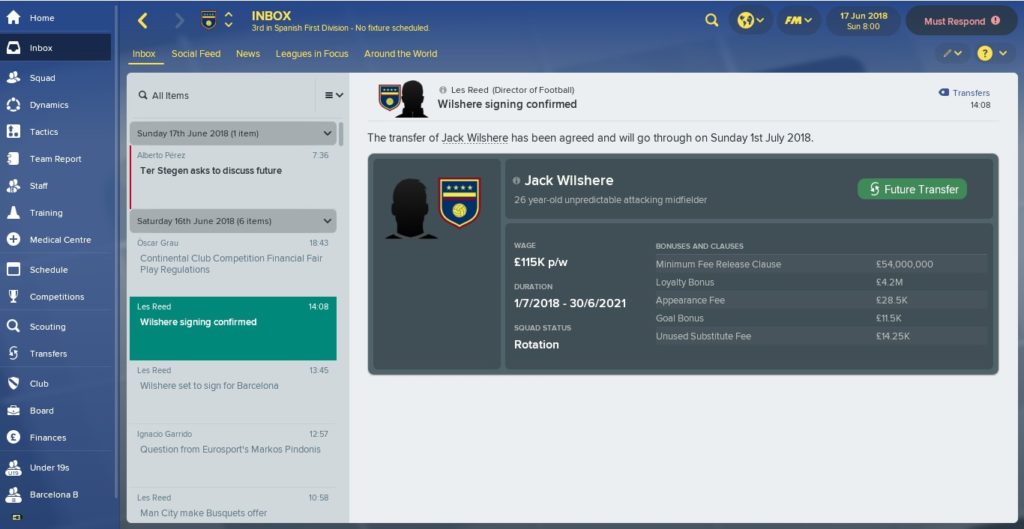