The beta version of Football Manager 2017 is now available for download and Iain Macintosh has been getting stuck in. He picks out his five favourite new features and improvements. 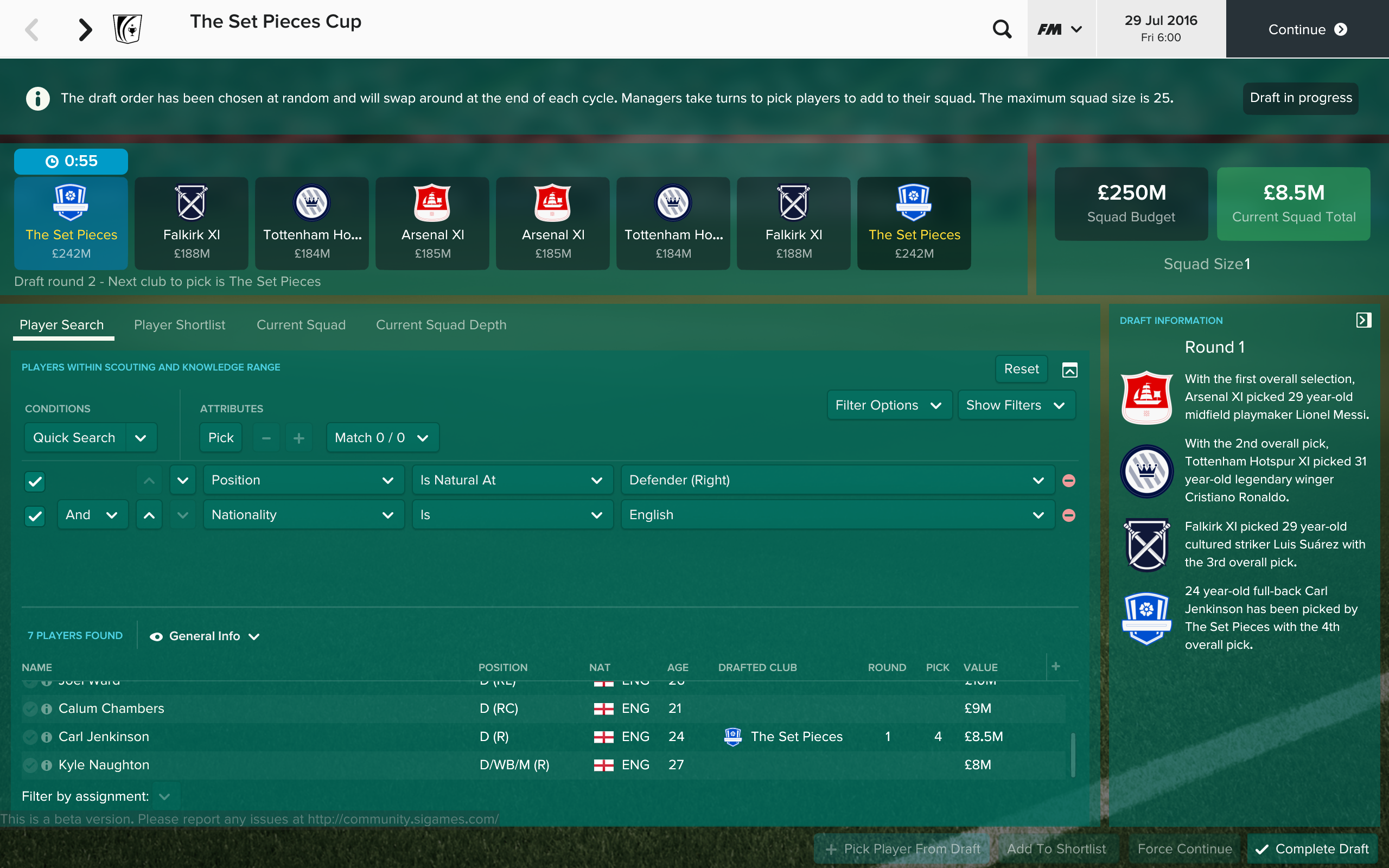 There was a Fantasy Draft on last year’s edition of Football Manager, but many people missed it completely. They won’t miss it this year. For veteran FM fans sensibly giving priority to their real life jobs, relationships and families, this is a godsend. This is a version of FM that can be played from start to finish in a single evening.

The first Fantasy Draft offered the chance to play small standalone competitions online, setting a budget and then drafting a squad to play against your friends. It was quick, it was easy and it was fun. But you couldn’t do it on your own. And though this will be hard for younger readers to believe, there will come a time when you and most of your friends will be in long-term relationships, quite possibly with children, quite possibly with demanding careers. Filling a wet Tuesday night with a bit of link-up FM will take more planning than a space launch.

That’s all changed now. And for the people who only occasionally find themselves with lumps of free time, welcome to a better future. Set up your competition, set the budget, select some AI opponents (some of whom you may recognise…cough cough) and off you go. Got a three hour train journey to kill? Fantasy Draft. Partner’s out, kid’s asleep, nothing’s on the telly? Fantasy Draft. Using the last of the power from the back-up generator in a crumbling post-President Trump world utterly ravaged by war? Fantasy Draft. Actually, no. Probably best to scavenge for supplies or something. 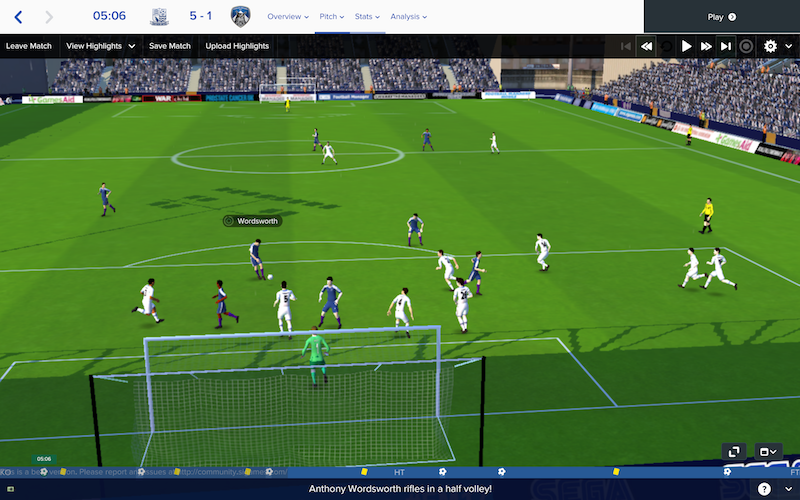 Perspective is everything. I can’t be doing with the ‘TV’ view on FM and I’m not very keen on the ‘Rail’ views either. I like ‘Sideline’, where I can see a big chunk of pitch and stroke my chin while I pretend to know what I’m doing. And if you can keep a secret, I’m also still very fond of ‘2D Classic’ because it reminds me of the time ITV offered a ‘Pro-Zone’ slant to their MOTD-style show and everyone got really angry and shouted at Andy Townsend. But I won’t be using any of those now.

FM17 has two new camera angles that have won me over completely. ‘Data Analyst’ is the distant, fairly steady view on which Gary Neville likes to watch his Monday Night Football for Sky Sports. It’s a really useful option for the early days when you’re trying to nail down a tactical plan. But ‘Behind Goal Low’ is my favourite.

Previous FMs have had a ‘behind the goal’ viewpoint, but it’s been a static position, as if you actually are sat behind the goal in the same seat for the whole game. That’s great for one half of the match, but markedly less informative for the other when you can’t really see what’s going on. This version ensures that you’re always behind the goal that counts, approximately ten rows back and right in the middle. Once you’ve adjusted to flipping from one end to the other and the disorientating feeling that both sides are attacking the same goal, it’s surprisingly good fun. In fact, you may start to feel guilty that you’re just watching the game, not managing your team. 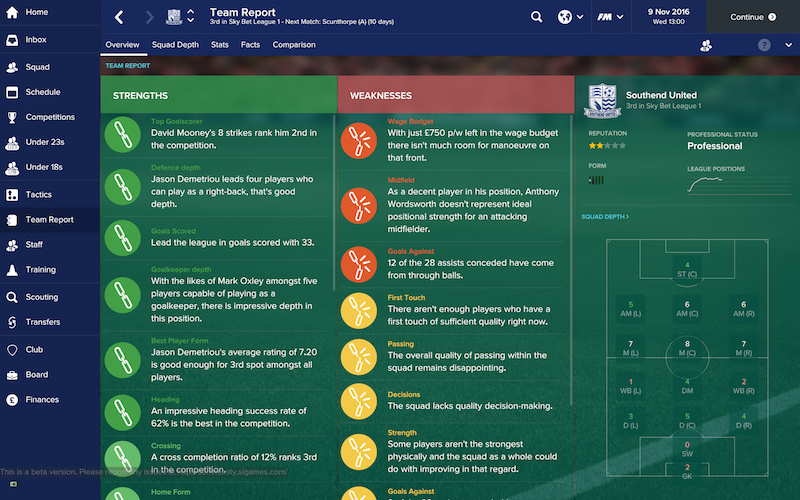 There have been team reports of some kind or another in FM for many years now, but the revamped FM17 reports are the best so far. When the game begins, you’ll immediately find the useful information that you used to have to go hunting for yourself. Information like a worrying lack of squad depth in specific areas or an assertion that you have one of the quickest or biggest or most technically adept group of players in the league. But it’s when the game starts to progress that this page becomes even more useful, telling you very quickly where your weak spots are and what you’re doing well. If anything.

This is all part of a wider effort to make information more prominent and obvious, and you’ll see examples of it throughout the game. Coaches will offer suggestions for training and you can apply their advice with a single click. Scouts will highlight talent and again, one click will sort it all out. It makes the game smoother, more enjoyable and less like having an actual job. 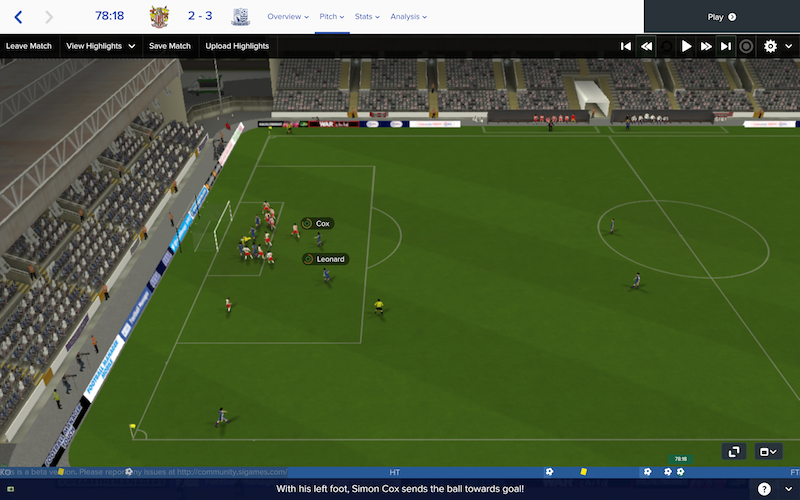 It’s never easy to immediately assess the quality of a new FM game. Generally, it takes about 100+ hours before you have an idea of whether it’s a classic version or not. After that much time, you’ll have noticed little quirks, like the crossing bug a few years back that saw so many freakish goals from the flanks, or those occasions where your goalkeeper chooses to have an embolism rather than collecting a routine back-pass.

New patches always iron out these anomalies, but from nearly 30 hours of play on this very early version, the match engine appears to be in excellent shape already. Unless you count my good start with Southend United, I haven’t seen a single unrealistic glitch.

The match engine is responsive too. When you take action to punish a vulnerability, it might not always guarantee a win, but you’ll always see how it helps your cause. For example, if you notice that the opposition left-back is pushing up without being particularly quick, you can tell your right midfielder to be a right winger with an attacking duty, switch to high-tempo football and direct everything onto his flank. Even if it doesn’t bring you the win, you’ll certainly notice a surge in chance creation.

And that’s all you can ask for with a game like this; a clearly defined sense that you are either helping or hindering your team. A sense that victory is the result of your genius, while defeat is the product of your idiocy. The best FM games are the ones you never blame. 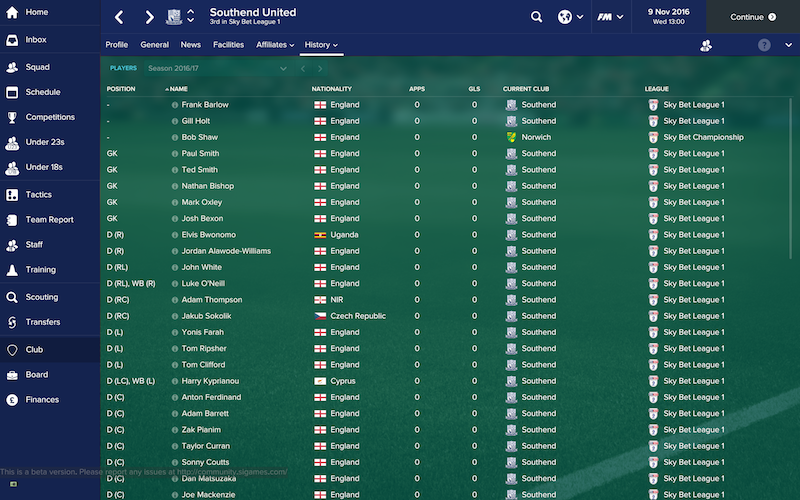 If you’re anything like me, and if you’ve read this far I’m afraid you just might be, it’s the full immersion of an FM game that tickles your fancy. You want to go deep. So deep, as Ice Cube might put it, you’ll put your butt to sleep. And now the game will retain more records on your progress than ever before.

People like us adored the ‘Best Eleven’ feature, but now you can find details on every single one of your former players and staff, what they did for you and where they are now. Year after year, you can roll down the screen and say, “Oh my God, I remember that idiot. I cannot believe I spent £1 million on him.” I like to call it, the Gary Fisken option.

You can find out more about Football Manager 2017 on their website. All information, screenshots, experiences, heartaches and moments of joyful redemption were experienced on an early Beta version.